How do I save my medinilla magnifica?

About a month ago I purchased a starter medinilla magnifica after running into a mature plant in a store and falling in love with the flowers, but not the price tag (no way I was paying $60 for a plant!).

To keep my explanation short, I initially overwatered the plant, so it lost about half its leaves, and the ones it did keep began to blacken. I trimmed back the blackening parts and got the hang of watering, so its condition is not deteriorating quite so quickly, but its leaves are still slowly blackening and every so often it drops a leaf.

I'm not worried about heat or humidity, I have a maranta that is flourishing and the two plants like a similar temperature/moisture level.

What can I do to keep my plant from completely dying? 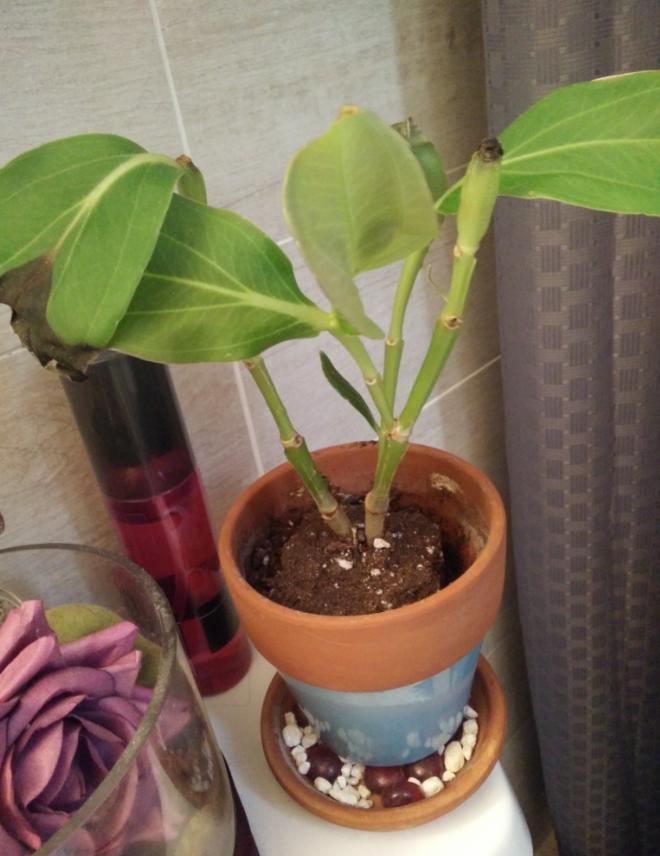 The plant dropped its 2 blackened leaves since last night.

As an update since this post has gotten a lot of views, I got a new starter medinilla magnifica about six months ago and it's doing well. I keep it in front of a west-facing window in a bathroom so it gets lots of humidity from showers, and I water it only when its leaves begin to droop. I have not yet repotted it from its original container. It has been growing slowly but steadily, and I'm hoping in a few years' time I'll have a flowering plant.

It sounds like you may still be over watering. Post a photo if you have one in case we can see something else wrong with your plant.

Medinilla magnifica is better off too dry than too wet. I've read the best way to water is every 10 days or so from below. Place the plant pot in another container with a few inches of water for 10 minutes, then remove from water and let drain for 1 minute. Be sure the plant is in a pot that drains well so that water doesn't remain in the bottom. Let the soil fully dry out before watering again.

Since it is a tropical plant, you can keep the humidity high by misting the leaves often/daily, although this is more important in the winter than the summer and might not be a good idea in the current state.

I know you said the temperature and humidity are fine, but just for other's reference the ideal temp is 63-77 daytime and 60s at night. Medinilla prefers high but filtered light, avoiding direct afternoon light.

If you have a section of the plant that is healthy you may be able to take a cutting and propagate a new plant. This way you could have a fresh start in new soil.

Not the answer you're looking for? Browse other questions tagged houseplants tropical or ask your own question.

3
Spiders in my plant (not spider mites)
0
Am I over or underwatering my bird of paradise?
2
Name of this Plant and how to keep it straight
1
How can I save my miniature roses?
1
Will a plant stop growing if new growth is dropped?
2
How to nurse a plant damaged from shipping back to health?
3
Can I save my rubber tree?
5
Plant identification and advice on how to maintain it