Why do two kalanchoes on one windowsill exhibit different growth habits?

I have two Kalanchoes on my south-facing kitchen windowsill (about 3' / 1m wide), both cuttings from the same parent plant (which succumbed to mealy bugs). Both are in the same size pot (no more than 1.5' apart), were planted at the same time using the same potting compost (Miracle-Gro brand, if it's significant) and both get watered and fed on the same schedule.

However, one stays low and bushy and is covered with flowers in the springtime. The other is tall and straggly (if I pinch out a growing tip, a single side-shoot will take over), drops all its leaves along the stalks and has never flowered. The neighbor had a large tree in her yard that shaded it during summer, but she took it out early last year. The flowering one gets shaded by her house slightly earlier in the afternoon.

The leaves on the troubled plant fade to yellow, then dry out and turn brown (at which point I pick them off). But I see the same pattern with older leaves on the other plant, just on the troublesome plant a leaf's lifespan seems much shorter, so that I only have a small clump of leaves at the top of a stalk. 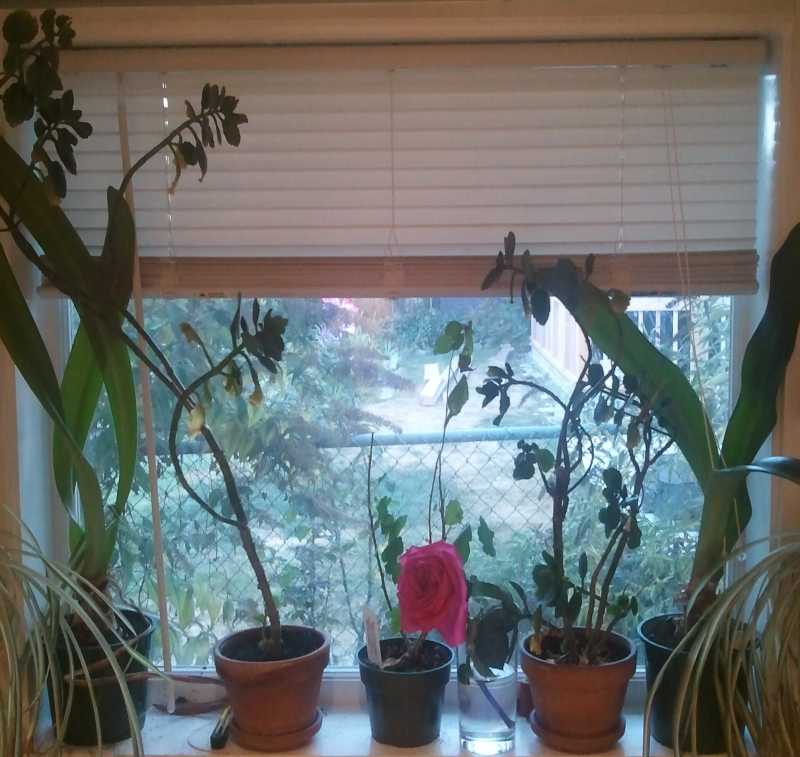 I've checked for pests on them, but haven't found any. What is causing the different growth habit, and how do I fix it?

This strange growing behavior might be an example of topophysis, which describes the situation when cuttings from different parts of the plant have different growth characteristics. According to The Reference Manual of Woody Plant Propagation (1987), by Michael Dirr and Charles Hauser, "... cuttings taken from lateral branches of Taxus cuspidata var. capitata, upright Japanese yew, produced spreading plants, while vertical cuttings yielded an upright version similar in habit to the parent." Perhaps, kalanchoe behaves similarly. Cuttings taken from the top of the plant produce upright tall plants. Whereas, cuttings taken from the side produce spreading bushy plants.

The Elisabeth C. Miller horticultural library has a bit more information in a knowledge base article on topophytic plants. Still, no specifics on kalanchoe.

15
Why did my pepper plants suddenly shrivel?
4
Why is my Japanese painted fern struggling?
3
How Should I Take Care of These Two Phalaenopsis Orchids with Different Behaviors?
8
How can I restore foliage in a Chinese Elm bonsai?
7
How should I care for my struggling Nepenthes Miranda?
11
Can I cut the top off a drooping aloe plant?
3
Why is my mint plant drying out?
2
Why are my corn plant's leaves turning yellow?
1
What is happening to my Dieffenbachia, and what can I do about it?