Is this chili plant dead?

I appreciate this is a hard question to answer, I just wanting to get people opinions on whether I can give up on these plants?

I have another plant from the same crop and it still have one or two leaves, and some green colour in the stems. 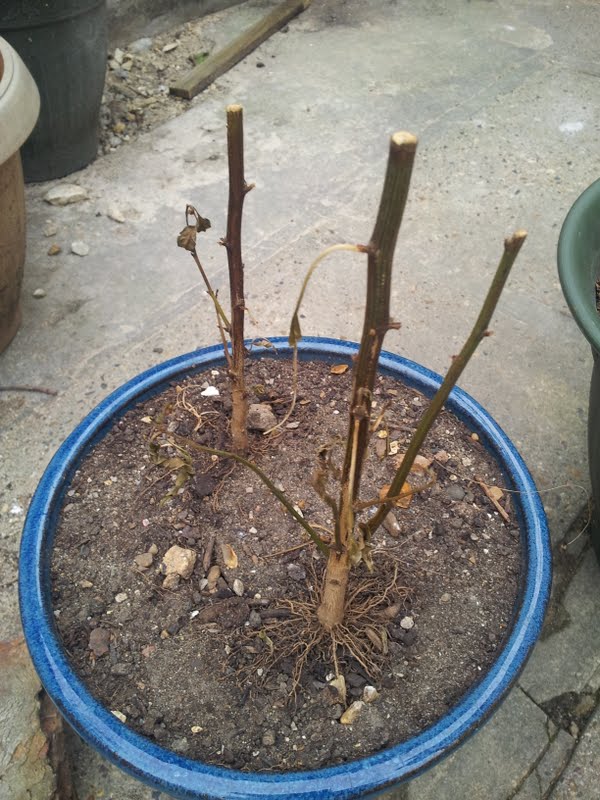 Yes I use the green stems as my guide. It could be the color-cast of the photo, but it looks like the stem on the far right has some green?

The very base between the roots and the branches will be woody like that - even on a plant that has life in it. This is also the area where you might expect new growth (as well as from any green branches above).

If the branches really are brown, then I'd discard it. Otherwise I would top-dress it with some compost - cover those roots up and improve the nutritional content of the soil (could be just the surface but looks a bit sandy/stony). If it doesn't grow in the next couple of months, discard it.

I would dig compost in before planting new plants, but doing this in this situation would disturb the roots too much.

I would say, if it was a cold time like winter, cutting the plant back so only a few nodes are above soil, and topdressing with some mulch could help same as winwaed suggested, as it gets colder and nutrition levels fall, some chili plants will purge their leaves and fruits. Another thing, if you left the fruit on the chili for a long time and it started to look like that, what we call "parent plant" is building up to die as it has fruited and viable seed created (healthy large pods), that would make its life cycle complete. After cutting back your plant, take some scissors or secateurs and lightly scrape back the bark on the lower area of the stem to look for any green or moist growth which would indicate your plant has instead become dormant. If dormant, keep an eye on it, water it every other week and it should spring back during fruiting season.

Not the answer you're looking for? Browse other questions tagged vegetables peppers chili repair or ask your own question.

12
What kind of chili turns brown and shrivels when ripening on the plant?
11
Why does my pepper plant have yellowing, drying and curling leaves?
5
Chilli plant leaves wrinkling
11
Growing multiple pepper plants in one pot vs just one plant per pot
3
Carolina Reaper problem
2
Is it too late to top this cayenne chili plant?
2
Why does this chili pod have spikes?