Which is a weed and which isn't?

On the left side of my garden I have a lot growing and it is all mixed and messed up.

I'm not sure which of these is a weed and which isn't. 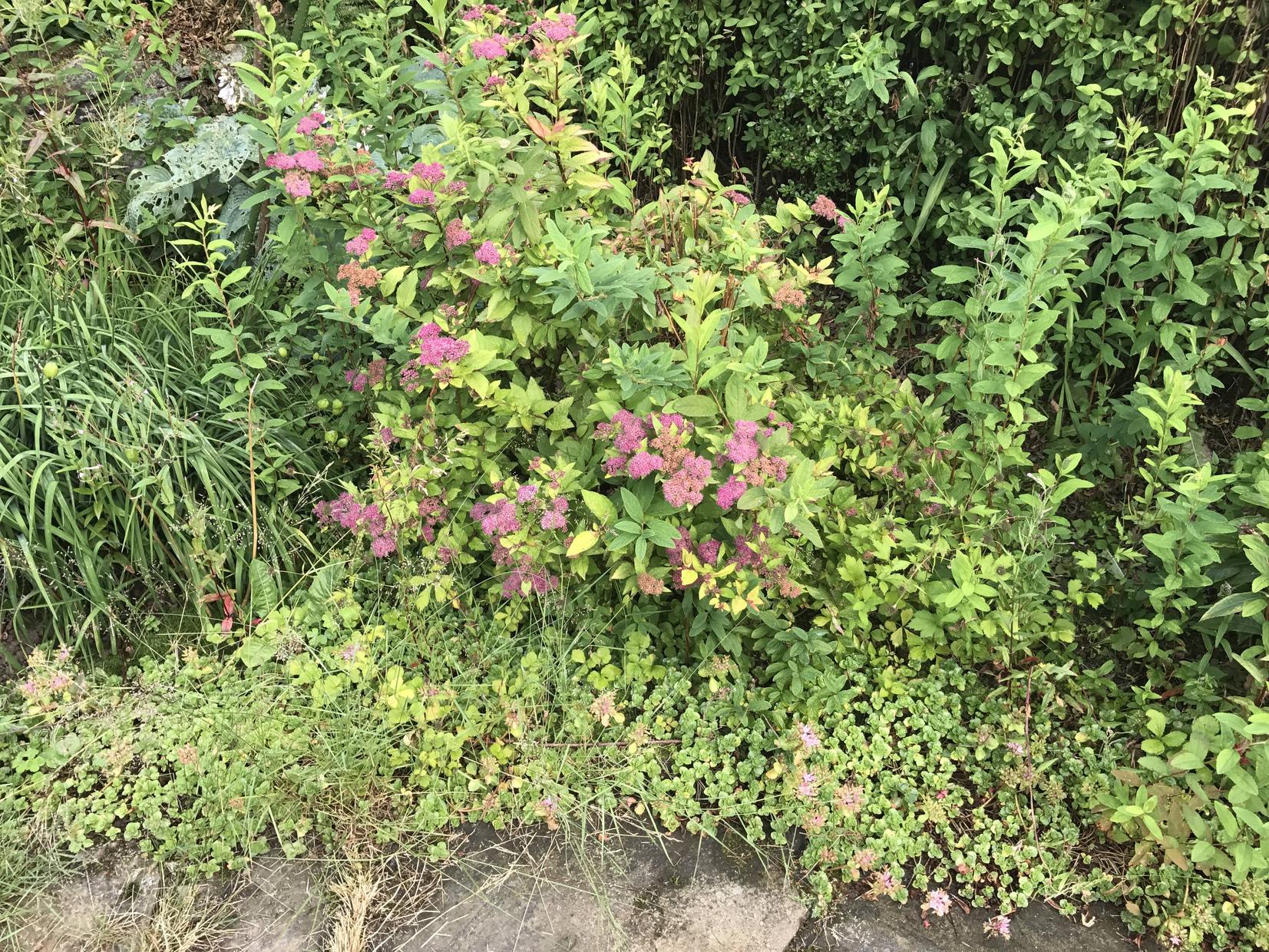 I just went out into the garden, and taken some close shots of each. I've put them all here.

What do I remove and what do I keep? Or do I start over and remove all?

The plant in the centre of the picture is a Spiraea variety, maybe Goldmound or Anthony Waterer, a deciduous shrub, and you can cut that back a few inches after the flowers are finished. But there's something else growing through it, the rest of which is to the right of the picture, and I'm not sure what that is, can't see it clearly. The low growing stuff at the front is obviously a ground cover plant with what might be dusty pink flowers, but the picture isn't high enough resolution, because when I magnify it to see detail, it's not possible, its too fuzzy, so I can't identify what it is.

The way to sort out what's growing is to look at the base of the plants concerned, pushing other plants out of the way, and decide what's coming from where...

Looking at the new photos, the one with all the holes in pic 7 is a Hosta variety and the white flowers on a stalk are off that. It's full of holes because snails and slugs absolutely love Hostas, so if you're going to grow them, they need slug protection. Its been crowded out by the Spiraea, so it needs moving (if you want to keep it) to a different spot -they like shadier areas.

All the weedy looking plants with either spindly bits at the top or with small pink flowers are weeds - I see some either side of the Spiraea and there may be more lurking inside the bush, you'll have to check, because where there's one, there'll be a lot more.

The plant with bright pink largeish flowers and dissected leaves is Malva moschata, shown in pics 5 and 6.

The plant with grasslike leaves (pic 4) is a daylily (Hemerocallis) which has finished flowering. The groundcover (low growing, at the front, pic 3) is one of the Saxifragas.

Pic 8 might be a Magnolia, but I'm not sure.

Picture 9 is a Hebe, I assume the same one shown from a distance as Pic 10. Pic 11 looks like a laurel, maybe Prunus lusitanica, Pic 12, hmmm, not sure what that is. Its surrounded by rubbish, that is, weeds such as Geum urbanum, but the little grey leaved plant with yellow buds isn't a weed, just not sure what it actually is.

I'm still thinking about what the one next to the Spiraea might be - have you seen it produce any flowers at all? It might or might not be something you want to keep, hard to say at this stage.

Basically, there are too many plants in too small a space, so I suggest you look them up online (the ones you haven't noticed flowering), decide what you want to keep and whether there's anywhere else to move 2 or 3 to, then dig out anything you don't want, including the weeds. If you decide to just keep one or two, dig them out, keep them somewhere out of the sun, roots covered and watered, turn the border over and clear out what you don't want, incorporate some composted manure, then replant the ones you've saved, water in well -best done in September rather than now. When planting anything, always take into account the ultimate height and spread of the plants concerned, and work out how much space each one will need around it.

The Hebe is now rather large - if you feel its too large for the garden because its overhanging the lawn so much, it might be time to remove it.

On the subject of the definition of a weed, it's just a plant growing in the wrong place, or where you don't want it, but even those weedy things with tiny pink flowers are actually wildflowers - you just don't want them in your garden. That particular weed is one that occurs where the soil is heavy, usually damp, uncultivated, and where drainage is poor.

2
Textured leafy green in garden
5
What are these 3-foot tall plants in southwest Florida?
3
Identify this upright branching weed with long leaves and reddish stems
6
What is this big plant
4
What is this variegated low-growing plant with purple flowers, and how do I get rid of it?
3
What is the tall plant in these photos?
3
Unidentified purple flowering plants that continually die mid-summer
4
Big cactus identification and how long does it take?
4
New Zealand weed with strong central stalk, narrow blade-like leaves, no flowers