Does my hemlock tree have wooly adelgid?

A few months ago, in March, I learned about the Hemlock Wooly Adelgid, and the damage it's doing to trees in my geographical region, which are primarily Eastern Hemlock, Tsuga canadensis. They're also endangering the Carolina Hemlock, Tsuga caroliniana, however that tree is not as common in the Northeastern United States.

Someone who was looking at my backyard pictures from the previous summer thought they may have seen it on one of my trees. After reading about the adelgid, including very important ongoing research over the last view decades, at the Harvard Forest here in Massachusetts, I became concerned. According to what I read, this adelgid is decimating hemlock forests in many states. In fact hemlocks are under quarantine in Maine and New Hampshire.

I called a local ecologist/naturalist/arborist, and he came right away. The tree which I had suspected was actually fine, but when he did a thorough examination of all the trees in the yard, he found wooly adelgid on my other hemlock. That tree is about 30 feet away from the other, in a totally separate part of the yard.

He explained that a wooly adelgid infestation is identified by appearance of white masses that look like cotton balls on the twigs and the base of the needles. Each one indicates the presence of an adelgid, who, while laying eggs, secretes it and uses it to cover their bodies. Those eggs hatch, and the next batch begins feeding, By the time those masses have grown larger, and they've become white and wooly, damage has already occurred. Over time the adelgid grows larger, causes widespread damage, and eventually death, to the tree.

He said my infestation was in a young stage, and didn't cover a large enough section of my tree to be doing major damage. He recommended removing the affected branches and keeping an eye on the rest of the tree as we came into the spring and summer. (We discussed various control methods, in case we needed them. The least aggressive one is a localized application of horticultural oil designed to kill only the adelgid and not the tree and other vegetation. The other is a chemical application, usually Imidacloprid or permethin. He doesn't like those, especially permethin. Treatment is always a last resort, because eco-systems all rely on each other, and even dead trees are important homes.)

We removed the areas where there was visible adelgid at varying stages of life. It's now the first of July, and what's left of the tree looks fine. There's plenty of new growth and I don't see anything suspicious, so we're not going to do anything at this point.

We've left the bare branches for the birds and other animal visitors to use. I'm glad we did, because many small birds hide there, and it's a great place for our baby squirrels. The woodpeckers are having fun too!

We liked the arborist very much, especially because of his attitude towards preservation. He spent a lot of time examining trees and bushes in our yard, and educating us, at no charge.

I'm posting this because I know that there are several tree experts here on the site, and would like another professional opinion please. I'm also hoping it will cause other people to examine their hemlocks.

I apologize that some of my pictures are blurry. They're a pretty good representation of what was happening at the time of the diagnosis, which was this past March, 2017. 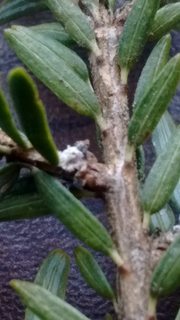 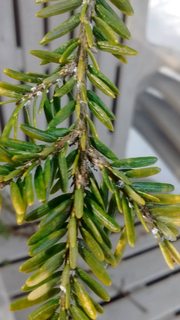 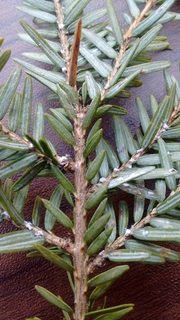 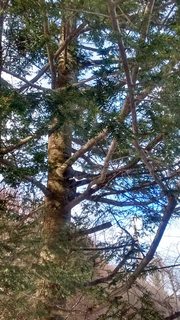 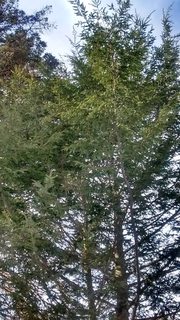 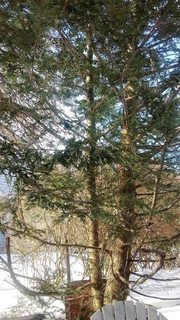 Definitely start a dormant oil application. Did you know those birds are eating these dudes hiding in all that foam? Use nothing else! Dormant oil in the fall is best. No baby birds and squirrels in the trees. It takes an awful long time for woolly adelgid to kill your trees. Looks like by your pictures it has been going on for quite awhile.

How wonderful to have an expert go through your yard with you!! Brilliant. And you really LIKE him/her!

I sort of admire these woolly adelgid insects. But a simple dormant oil application during the fall for a few years should take care of your problem.

Not the answer you're looking for? Browse other questions tagged trees pests or ask your own question.

10
Is there any cure or treatment for a queen palm tree diagnosed with fusarium decline?
8
Second opinion: Arborist says tree needs to go
4
How do I get rid of root suckers in my yard from my neighbor's big tree?
4
What should we do with a 7-8 year old honey locust tree that has been damaged by disease?
12
Why shouldn't I water a Blue Spruce tree during and after transplanting it?
6
What can I do with a large, old tree?
3
What should I do for unknown tree bark injury on a Chinese Pistache?
4
When does Ivy become dangerous or harmful up a tree
3
Is it normal for an oak tree to slough off its thick bark without it growing back?