Why have only the female flowers bloomed in my pumpkin patch

I planted two Giant Atlantic pumpkin plants in my garden around 9 weeks or so ago. The male flowers where the first to show, many of them but haven't bloomed and are quite firm to the touch still. Since then three females (1 on one plant, 2 on the other) have grown, bloomed and started to wilt (in the last couple of days) without any sign of the males blooming so that I can pollinate.

I understand that the male pumpkins are supposed to bloom first. Is something wrong? what? and is there anything I can do?

They were bred indoors for the first 6 weeks and transplanted outdoors in new soil/compost 13 foot holes. The rest of the garden (which they are now creeping over) is old soil, which I've been loosely mixing with compost as they grow over it. I've watered them 4-8 litres a day, at the base and also via funnel to the roots. Once or twice a week, adding high potash feed. There's not much else in the garden except some very new sunflower sprouts. I don't know the pH of the soil and have no way to find out.

I am in the U.K. (Scotland) it's been a combination of hot and sunny and cold and rainy although the soil has been no lower than 12C the entire time, that I can see. For most of their life they have been under a plastic, flexible greenhouse-type cover (until the last week or so).

(This is also my first foray into gardening) 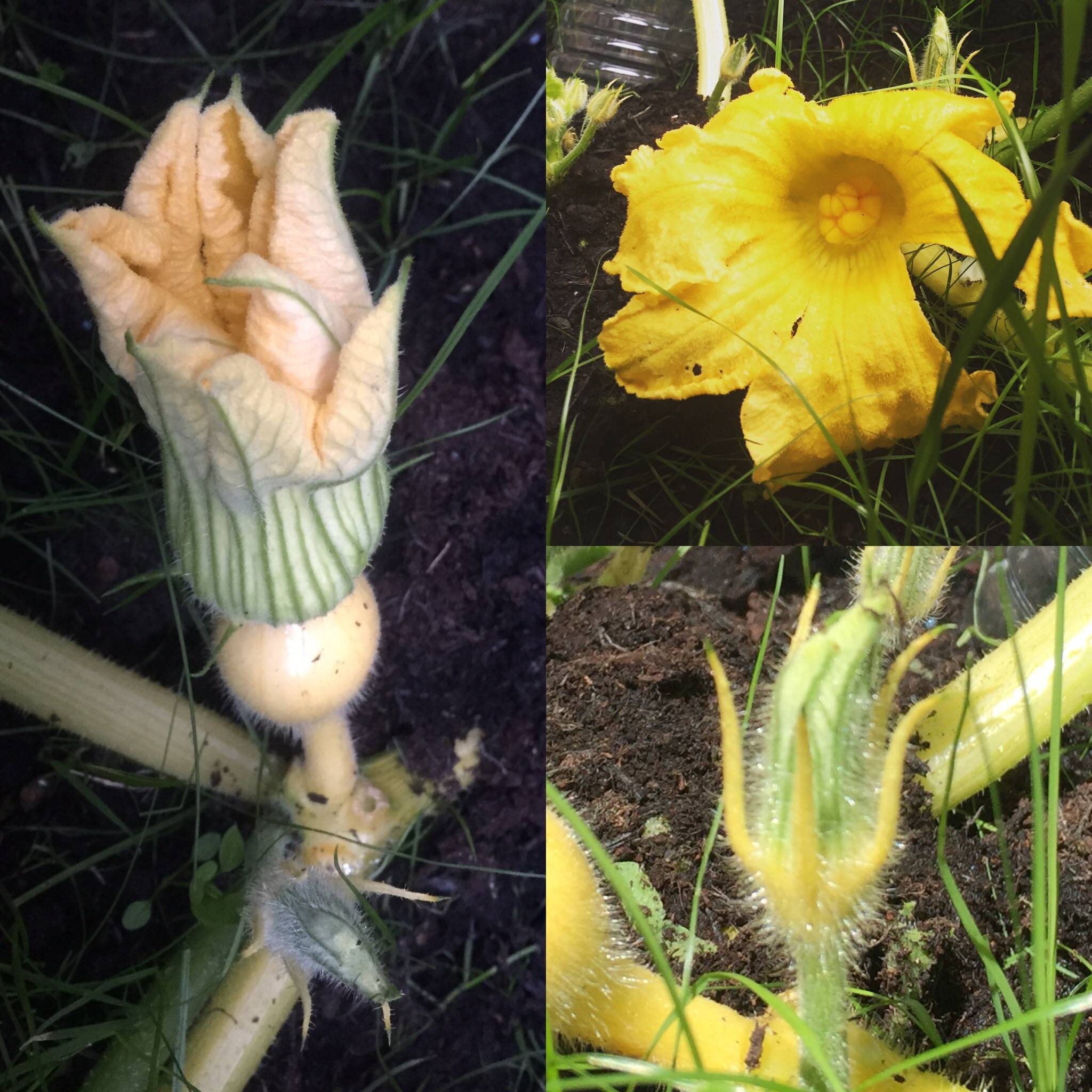 I don't know what's going on with your pumpkin. Usually male flowers form and bloom first, except for some varieties, maybe. Maybe it's a partially gynoecious variety, which would mean it should mostly produce female flowers. It might be a mutant, though, or maybe there is a pest or disease that is influencing it with regulators.

If you'll plant this kind again in future, and suspect the female flowers will blossom first, again, you might try planting another variety of the same species with it for pollination, unless you'll be saving seeds and don't want a cross. You may also try growing other giant varieties (like Weeks NC Giant), which may not have the same condition.

As for this year, if you don't want to wait it out and see what happens, I would personally try nipping all the flowers off and giving it some phosphorus. If this pumpkin is like cucumbers and melons it should grow new flowers faster if you take the old ones off, whether or not they're mostly female still. I don't know why the male ones would form without blooming unless something is preventing them from blooming or unless they do bloom, but just not when you're looking.

Turns out this isn't really a problem.

It's unusual that male pumpkins bloom after the female ones but not unheard of. A matter of weeks after posting this question I started to get many male and some female blooms in a much more expected pattern.

Not the answer you're looking for? Browse other questions tagged fruits flowering pollination pumpkins or ask your own question.

10
If I fix some drainage for my waterlogged pumpkin, will they revive?
6
Pumpkins in Florida
6
Why does my pumpkin patch have only male blossoms?
4
Pumpkins survive and continue to produce but fruit went rotten after some development
12
What is the difference between male and female asparagus plants, and is it important for growing?
3
Marketmore cucumber only has female flowers
1
Need help identifying this flower (male/female) on a Big Max pumpkin; also, why is it growing flowers already?
1
Growing Piel de Sapo melons stalled
1
Identifying female naranjilla flowers