Why is this tree foaming?

This tree on my property is foaming. What is the reason for this and should I be worried? 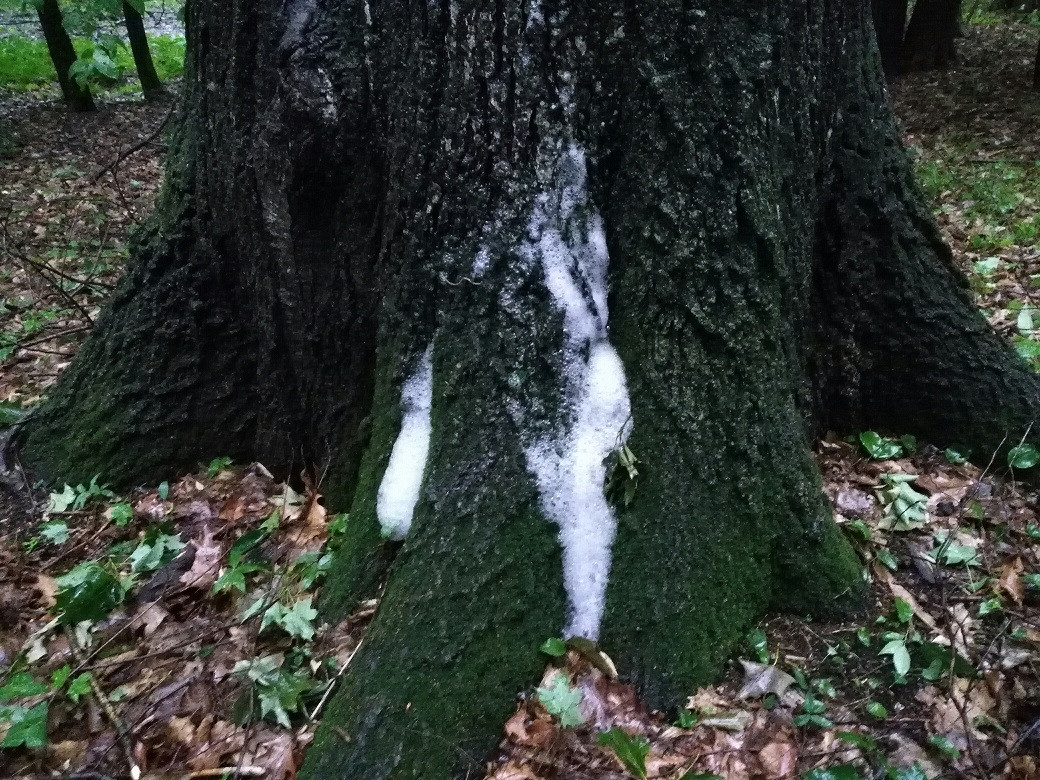 Foaming is not a good sign. There might be species where normal sap from the plant will foam but if so, they are very unusual. The fluid may be coming from decomposing dead wood inside the tree. Alternatively it can be mostly sap and caused by an active disease agent. Irritated, the plant tissue is doing what it can to eject the pathogen.

Regardless of exactly what is coming out - sap, water collecting in decayed wood, secretions from a fungus - there’s a reason it’s coming out. There has to be a lesion in the inner bark. Water can’t just slide down the inside of a tree’s bark and weep back out lower down unless the cambium under that part of the bark is dead.

Most likely the foam indicates rot at or slightly above the place that is oozing. Depending on lots of specifics like how much you care about the tree and what it potentially could hit if it fell, it’s probably a good time to get a good arborist to take a look.

Just the same, don’t assume the situation is dire. Perhaps it’s a disease that an arborist can help the tree to overcome. Maybe the area of dead tissue is small enough to be cut out or for the tree to heal up on its own. As an example of the latter, I nearly cut down a peach one spring because it had developed oozing vertical wounds in several places on the trunk. A more experienced friend said the tree, too exposed to the wind, had cracks in its wood and breaks in the bark from winter drying (that lesion thing). She said there was a good chance the tree would survive. It has, and a couple years later is doing much better. All I had to do to “cure” the problem was keep my chainsaw away from it!

Short answer/recommendation: Pay a well-qualified arborist to look at your tree. Free consultations from tree removal services aren’t necessarily the best. Check their professional associations and qualifications before going that route. Or maybe the local extension agent will consult for free.

If this is immediately after a storm came through, then this is a duplicate of my own issue, What is this white foam under my tree?

The rainwater reacts with chemicals from the tree/sap/exposed wood, and the angle of the water dripping from above onto the trunk below causes a bubble formation in exactly that area. It will happen exactly there on future rainstorms.

8
What is this white foam under my tree?

11
Why are my honey-locust tree leaves turning yellow in mid-summer?
3
What determines the year-to-year growth in girth of any particular tree?
5
Is the gash in this saucer magnolia likely to be a mortal wound?
4
Is it really that important to prune deadwood from trees? If so, why?
5
Is this an Ailanthus tree (“tree of heaven”)
4
Will a Cedar tree survive if a portion of bark is missing?
2
What tree is this and why aren't its leaves staying green?
3
Can you “seal” a cut off section of a tree to protect it from rot?
3
Should I do something about the curve in this sapling?