Need advice to save a couple mesquite trees in my backyard

A couple years back, my wife created a "walking bridge" between two trees in our backyard using high-tension straps for a child's birthday party. No one ever removed them. (I wanted too, but I was met with resistance because apparently the thing is fun to climb on.)

Yesterday I noticed that the part of the tree above the strap was "discolored." I (finally) removed the strap, and the bark of the tree under the strap doesn't look too happy.

These are large, established trees. They're attractive & provide a lot of shade. I don't want to mistreat them or loose them. 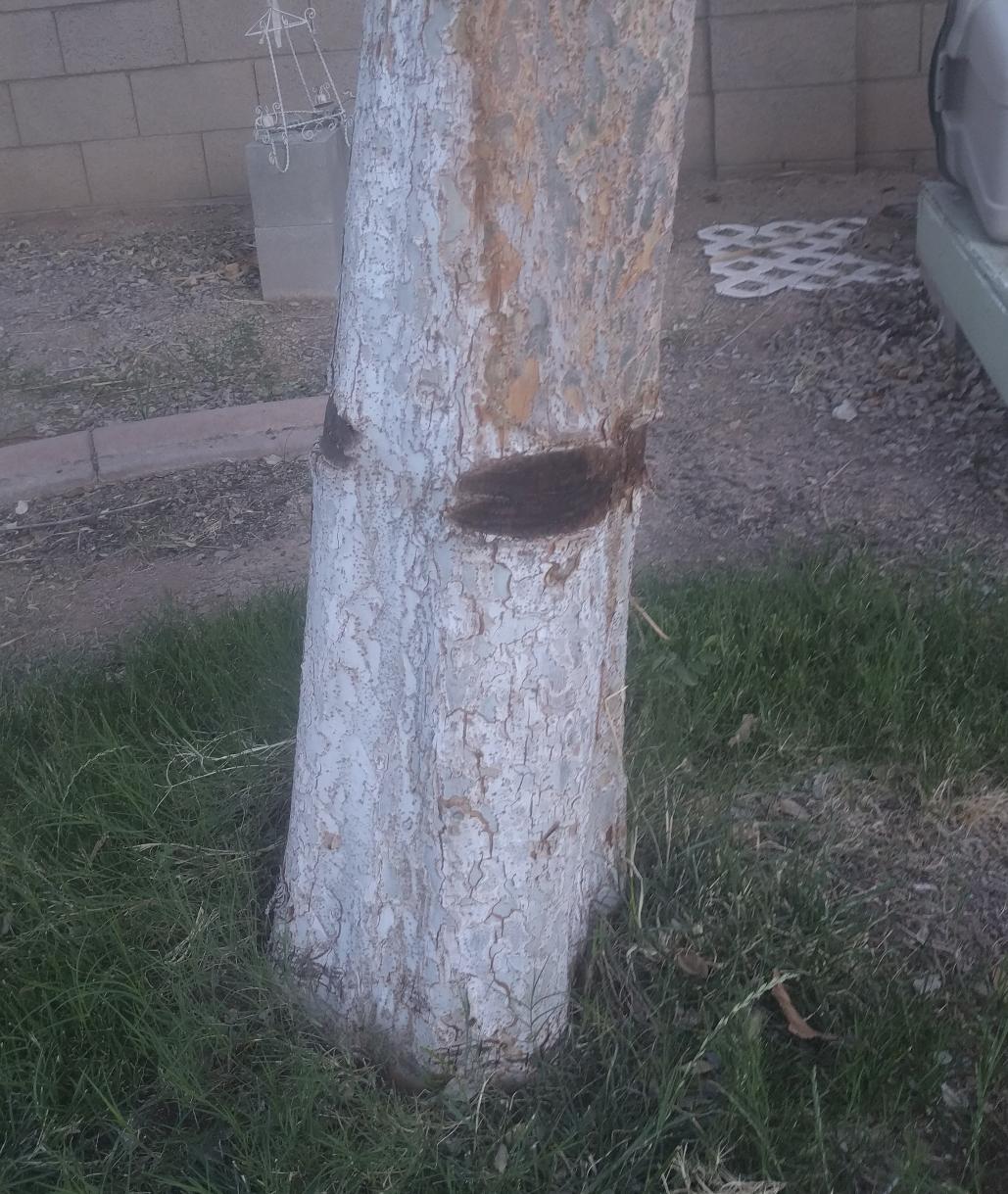 Please advise me on how to undo the damage.

You've done the only thing possible to save your trees. The picture you've posted shows that that tree has viable vascular continuity. The darkened areas are probably still working as well. Mesquite trees are the toughest tree I've known. They evolved to deal with Mastodons and other large herbivores in fact to provide a symbiotic relationship with them.

They've no shortage of roots. They have the deepest taproots and longest roaming lateral roots. If there is water around they will find it. Unusual for plants or trees to have root systems that go outside their canopy drip line. They are built to survive.

I'd like to see part of that blackened area nicked. Just a little 'scratch' to see if there is green cambium beneath the bark. I have a feeling there will be. Please send a picture if you are able.

These are a weird tree because I've heard, if they were chopped down they would actually grow back with a normal canopy and branching. Other plants send suckers up but they never again look like a normal tree of their species. Regardless, your trees will be fine. There is nothing you could do they haven't already done to protect themselves.

They've lived for a few years with a compromising restriction and have had time to thicken the bark to protect the thin cambium. I can see where the tree has even deformed at the blacked area to offset being pulled off center. The bark above and below looks healthy. The one area to the right and above the marks looks the worst. Maybe do a couple of nicks, vertical nicks. A nick or scratch on the bark just above the marks on that right side? If the cambium were compromised in a complete circle around the trunk that would be a problem. Same as 'girdling' a tree. Not a problem for your tree (s).

For other trees I would worry about the wind blowing them over. Your trees were literally 'Staked'. Staked trees that are held from being able to move don't have the best root systems so when they are finally freed will easily be blown over or will break off at the area of the ties. Trees need to move in the wind to build thick trunks and deep roots. These trees even though 'staked' were already mature when 'staked' unlike staking an immature tree. With their massive root system they aren't going to blow over and I doubt that their trunk will break.

Glad you noticed when you did. There is not a thing you can do or should do. I think they'll be just fine. Love these trees. They actually can live for hundreds of years. They are built for Saber Tooth cats using them as scratch posts. Mastodons rubbing up against them to itch on the thorns? I can only imagine...'Manna of the Desert'? Cool trees built to last.

Not the answer you're looking for? Browse other questions tagged trees damage or ask your own question.

5
Do I need to change the irrigation for my Shamel Ash trees?
5
How quickly do I need to plant bare-root silver birch trees in winter?
4
I need help deciding on what tree to plant in my backyard
4
How can we save the trees in our historical garden from dying?
1
Need repotting advice for my small red maple (hopefully to be bonsai)