Does anyone know the name of this young plant shrub?

The plant has opposite toothed single leaves and opposite stems growing in Northern Virginia. The color of new growth stems is a deep burgundy with white speckles. I'm guessing it is a shrub in the honeysuckle family. It is a volunteer whose seed was likely deposited by a bird. There are no other plants like it in the yard. It had one woody stem last summer which I cut to the ground in late winter of this year. All the growth in the pictures has occurred this growing season. It is a young plant that I have not seen flower and fruit. The pictures were taken today, June 12, 2017. In the second picture it is the single season shrub in the middle. Please disregard the plants that surround it. I planted the surrounding plants and know their names. 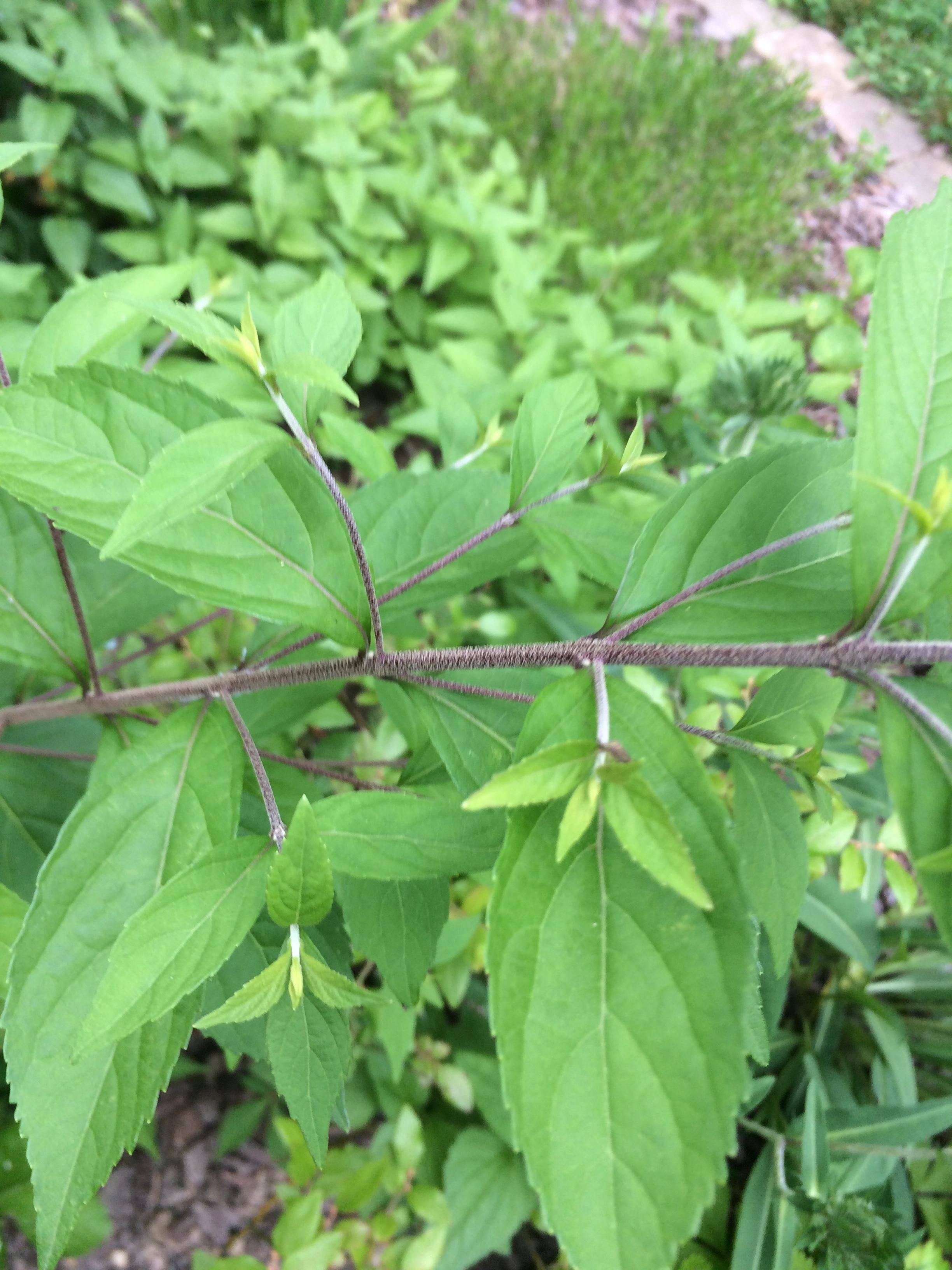 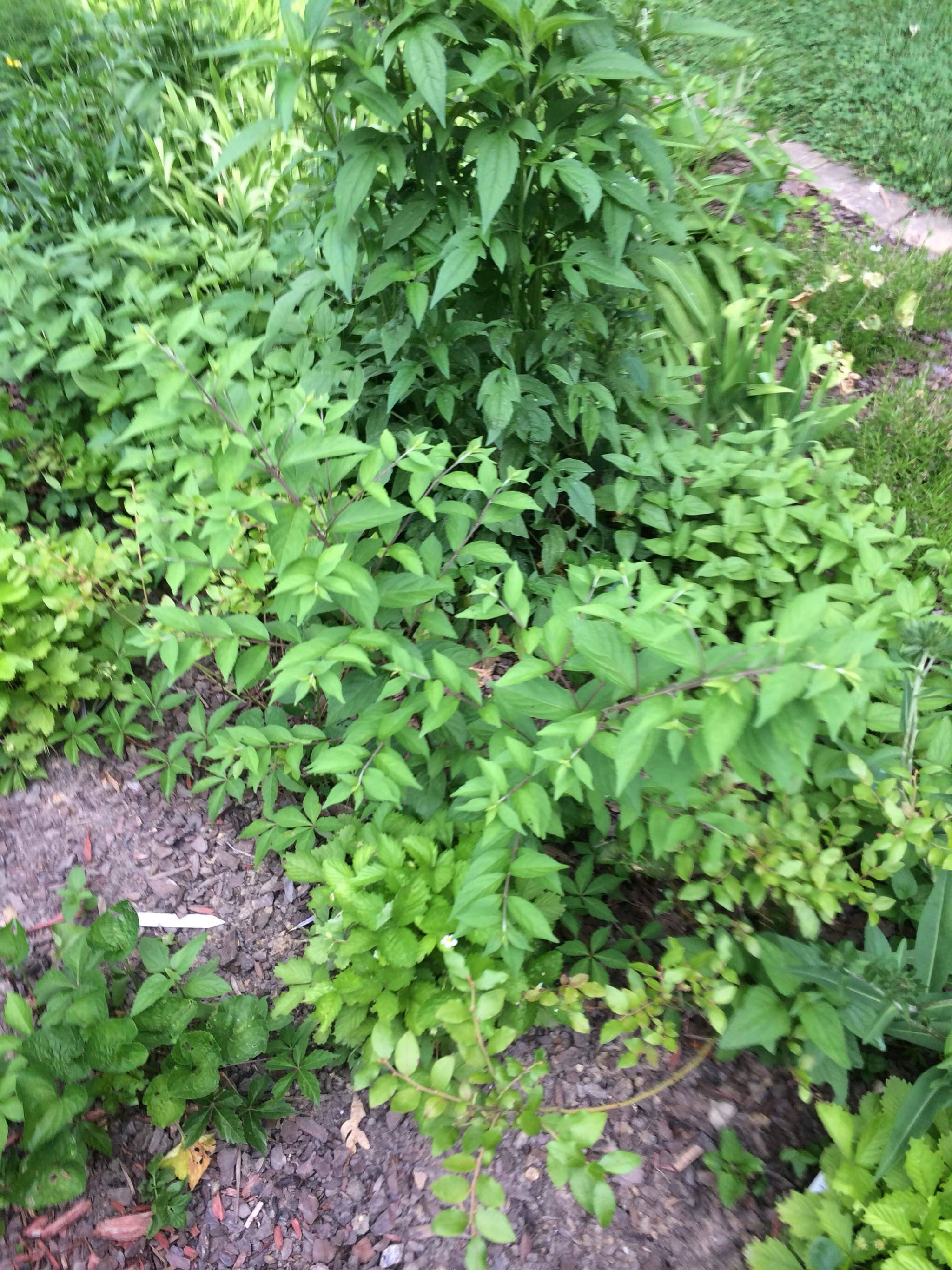 Here is the picture of the leaves and stems of my Gray Dogwood (Cornus racemosa): 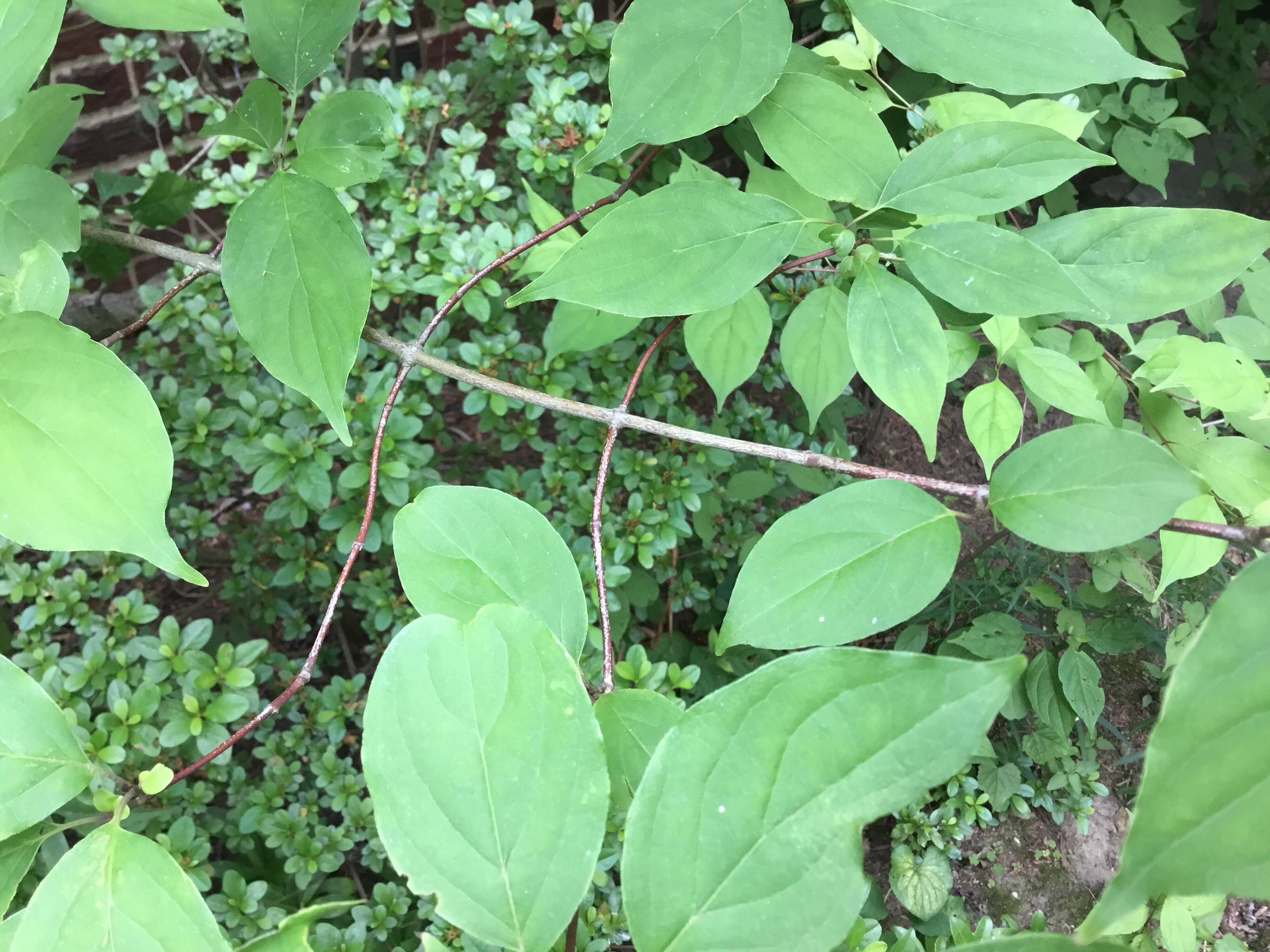 Here is a picture of leaves and stems on one of my Flowering Dogwood trees (Cornus Florida). It is the state tree of Virginia and native to the eastern United States. It's a very popular landscape tree in Northern Virginia. 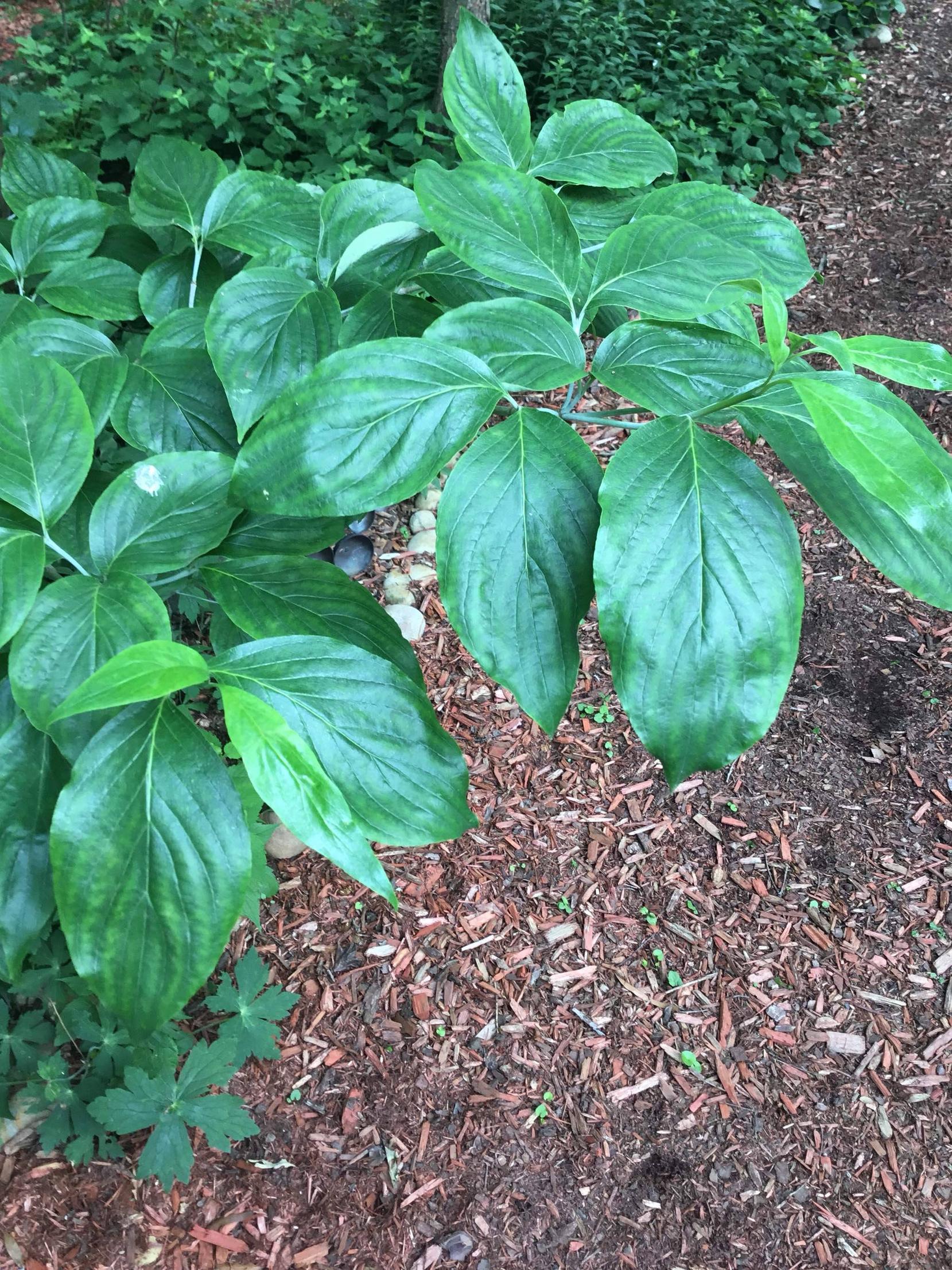 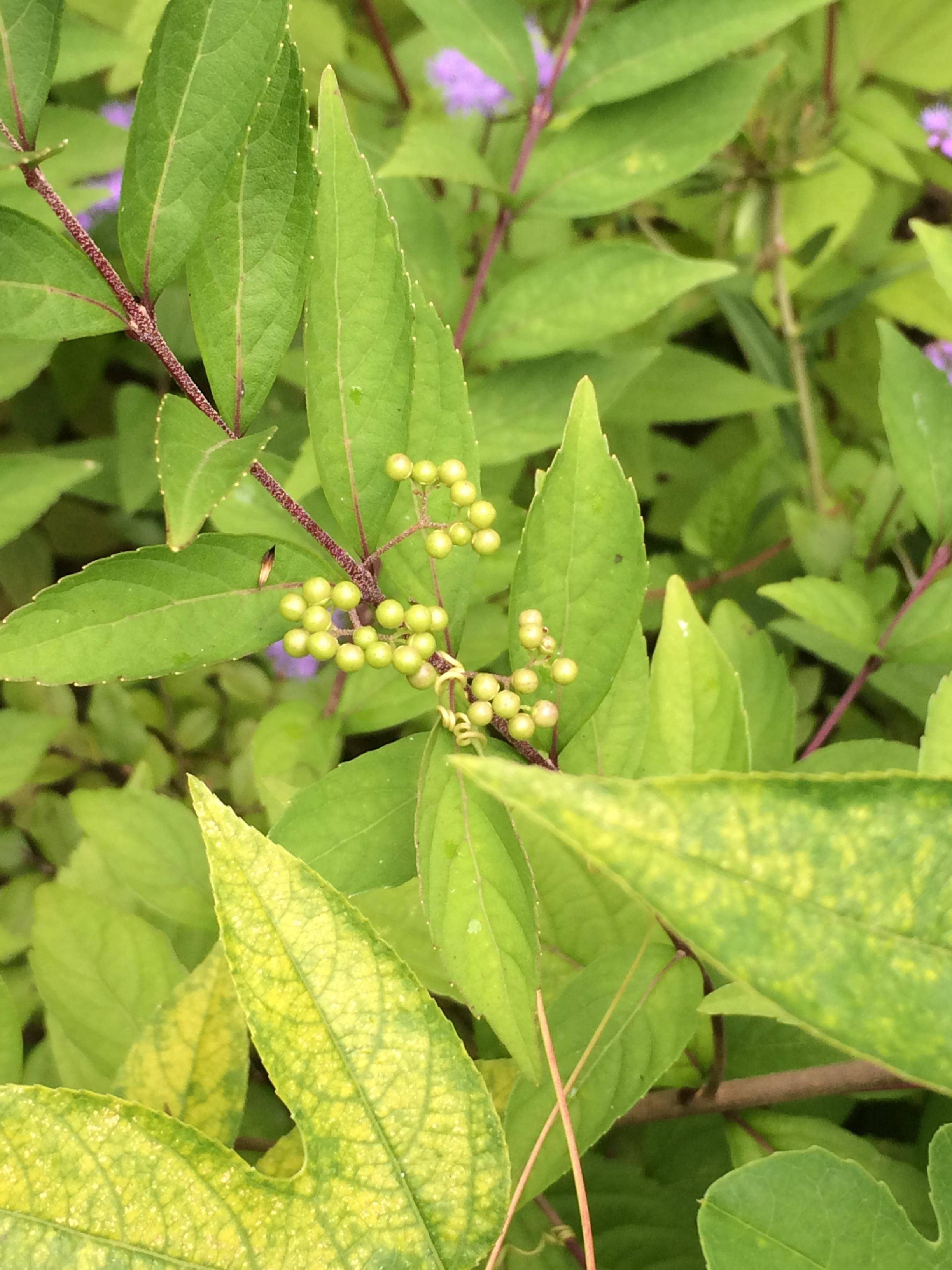 The plant I had the question about had very small blooms on it in July, although it could have been late June. At that point I still didn't know what it was, but now (September 1, 2017) it has small berries, still green, but at least one is beginning to show some purple. I am very certain that I now know the Genus of this bush. It is Callicarpa, a beautyberry bush. It is either Callicarpa dichotoma or Callicarpa japonica, I think dichotoma. I will take another picture when the berries are purple, as long as I am allowed to answer my question a second time. Here is a nice three and a half minute description of the species at YouTube: https://youtu.be/1d_-qKL_Z1s Once I take the picture of the ripened berries I will pull this shrub out. I tend to use native plants. I have Callicarpa americana in the garden, a U. S. Native. It's leaves and berries are larger. The bush is larger also, but I cut it down to about 1 or 2 feet in late winter or early spring. Then it grows to about 5 feet by the end of the growing season.

As noted above, I've identified this plant. At least I know the Genus. It is Callicarpa. The berries are what tipped me off. Though the flowers I remember seemed smaller and green, not purple or lilac, as I see in pictures of Callicarpa dichotoma flowers. I wish now that I had taken a picture of the blooms. Perhaps I will cut it down to the ground, rather than pull it out, after I take pictures of the berries, which will be turning from green to purple soon. That way I can have another opportunity to see the blooms. Certainly it was transported to the yard after a bird ate a berry elsewhere. I suspect either an American Robin or a Gray Catbird made the contribution, both species frequent the yard often. Where the bird found the berry it swallowed I'm not sure. Catbirds migrate south in Winter and return in summer. Robins, in winter, seem to just shift their location to wherever they can find berries. I know berries are in a bush when I see Robins flocked and active in certain shrubs or trees, especially in fall, winter and early spring. It seems the bush must be in the area. The seed likely did not remain in the bird's belly for very long, perhaps a day or two at most?

The leaves look very much like Philadelphus leaves and they're opposite too. Wikipedia mentions there are about 60 species. Philadelphus inodorus is native to the region. I'm not certain though if bark on young stems would be spotted like this but perhaps a related species? Philadelphus species flower on second year wood so if it is, you wouldn't be able to know this year.

Here is picture of the berries now that they have turned from green to purple: 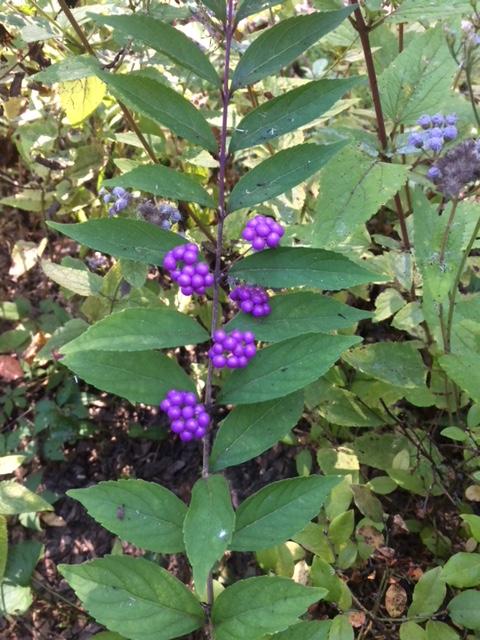 The other plant to the right, with the small blue flowers, is Blue Mist Flower with the scientific name Conoclinium coelestinum. Many are now seeding. The seeds can be seen on the leaves of both the Beauty Berry and the Blue Mist Flower plants. 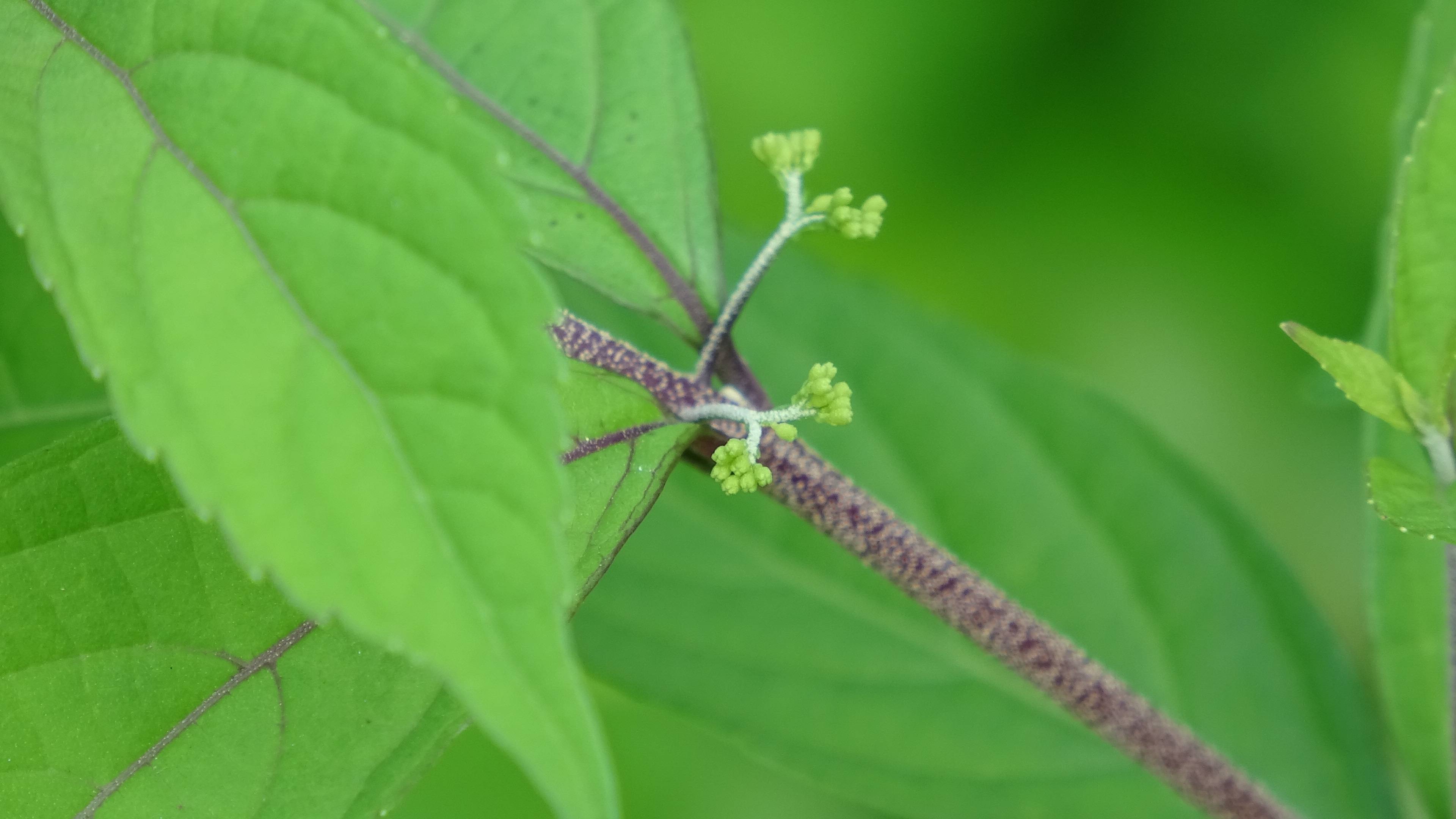