I asked a question earlier about why some of my tomatoes are really big compared to the rest, and at this point the big ones have grown a bit more and it looks like they're different plants after all.

For a little background, these unidentified plants are around tiny variety of "balcony"-sized tomatoes. Here's the biggest ones: 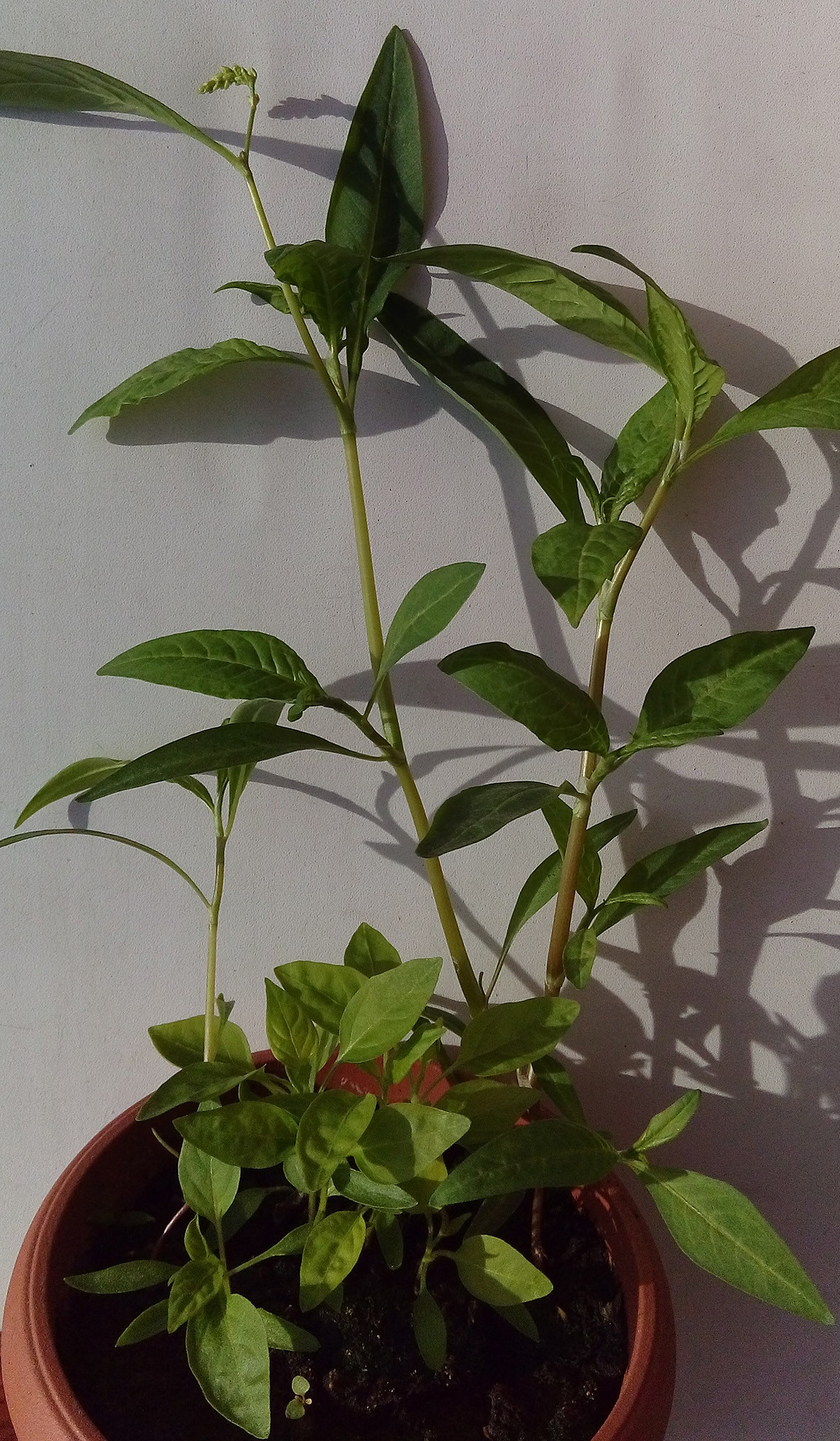 And here's a close up of the top part (with presumably future seeds): 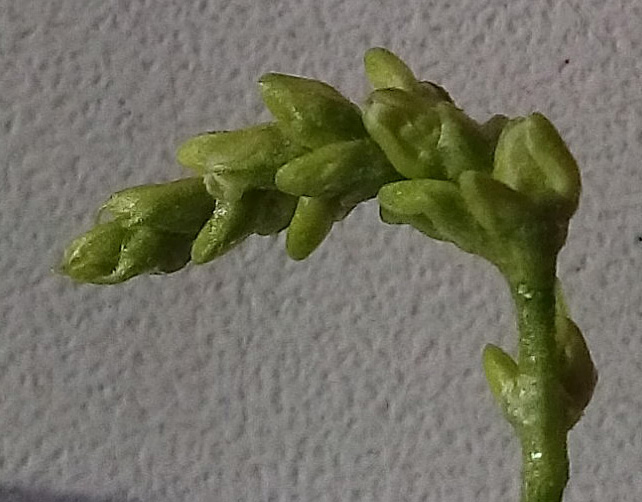 Another pot has a similar plant growing: 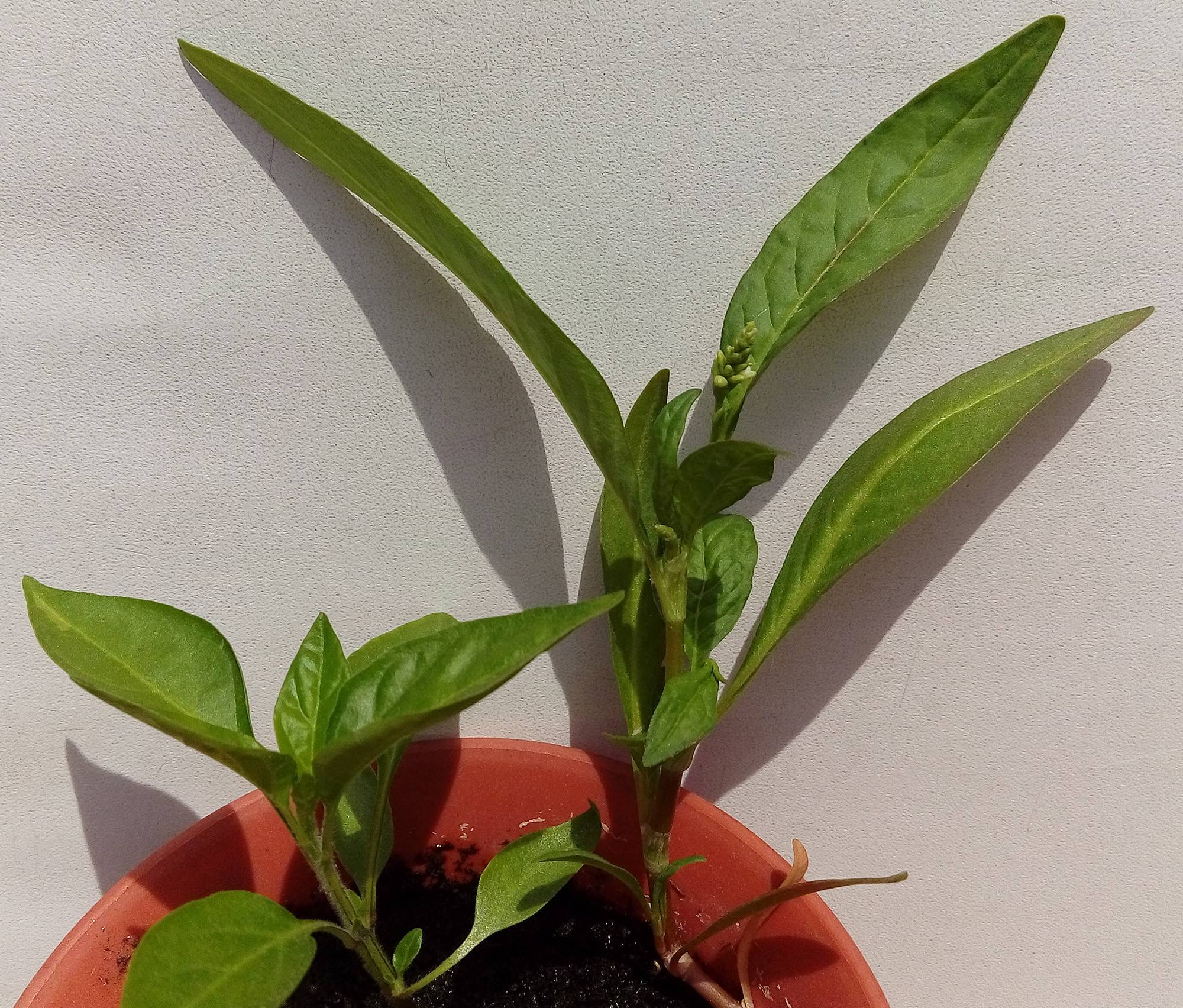 This pot has a more mature tomato plant, which has its first leaves turned yellow, and you can see how the shapes of the first tomato leaves is very similar at the beginning stages to this unknown plant: 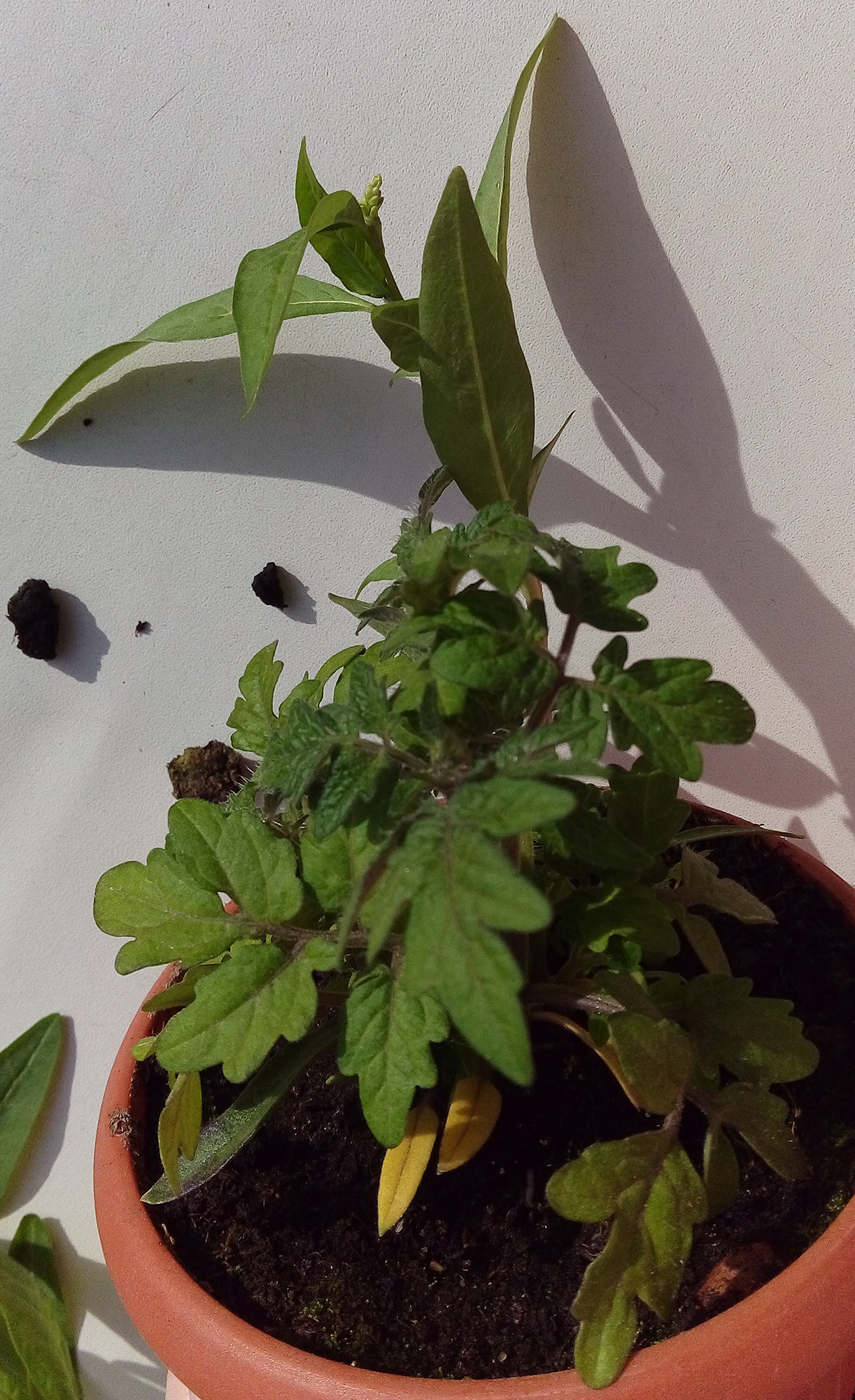 It grows on a thin red stalk, while the tomato stalk gets a lot wider and isn't red at any point (I think): 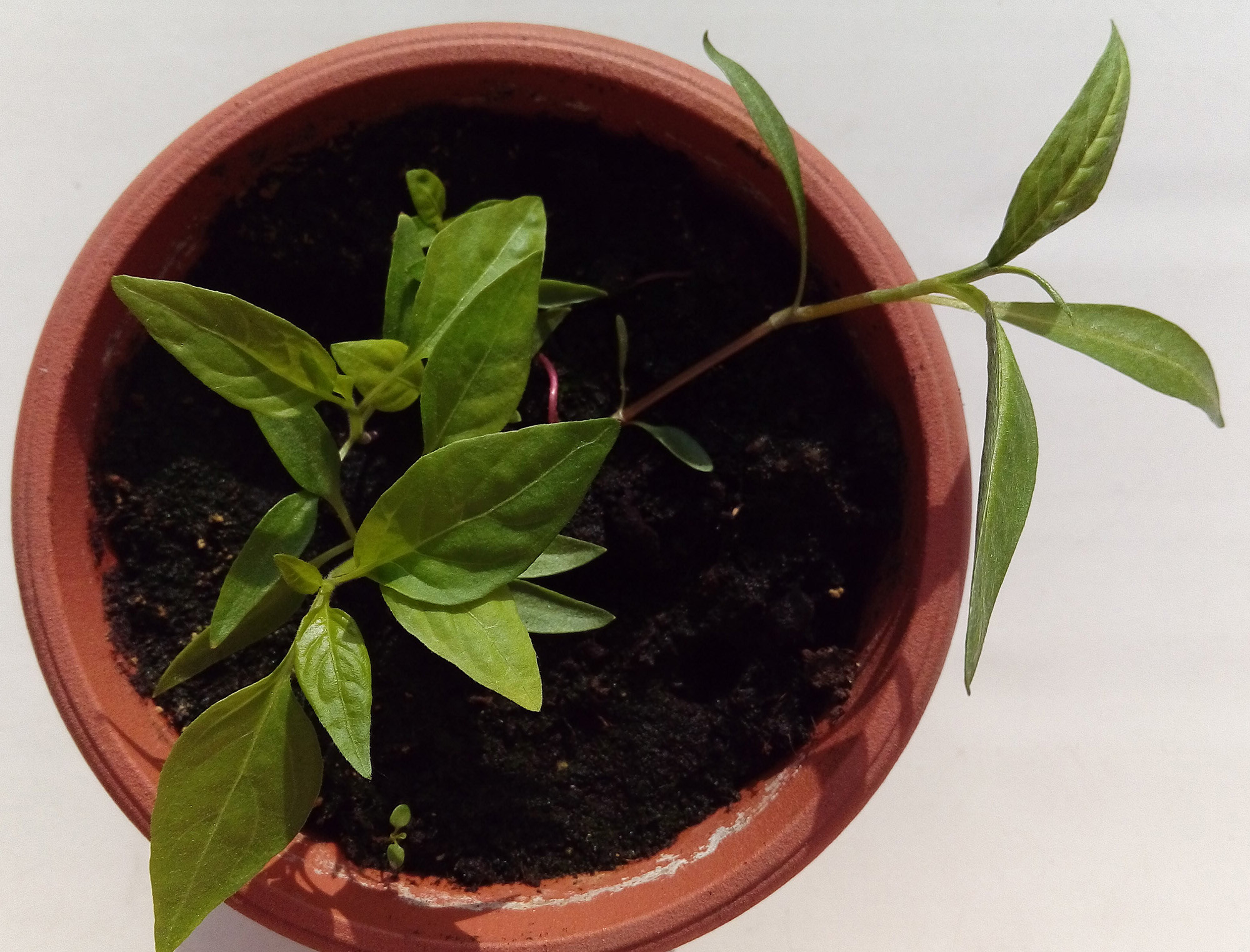 Here are a few new saplings probably from that same plant which suddenly started growing all over my pots: 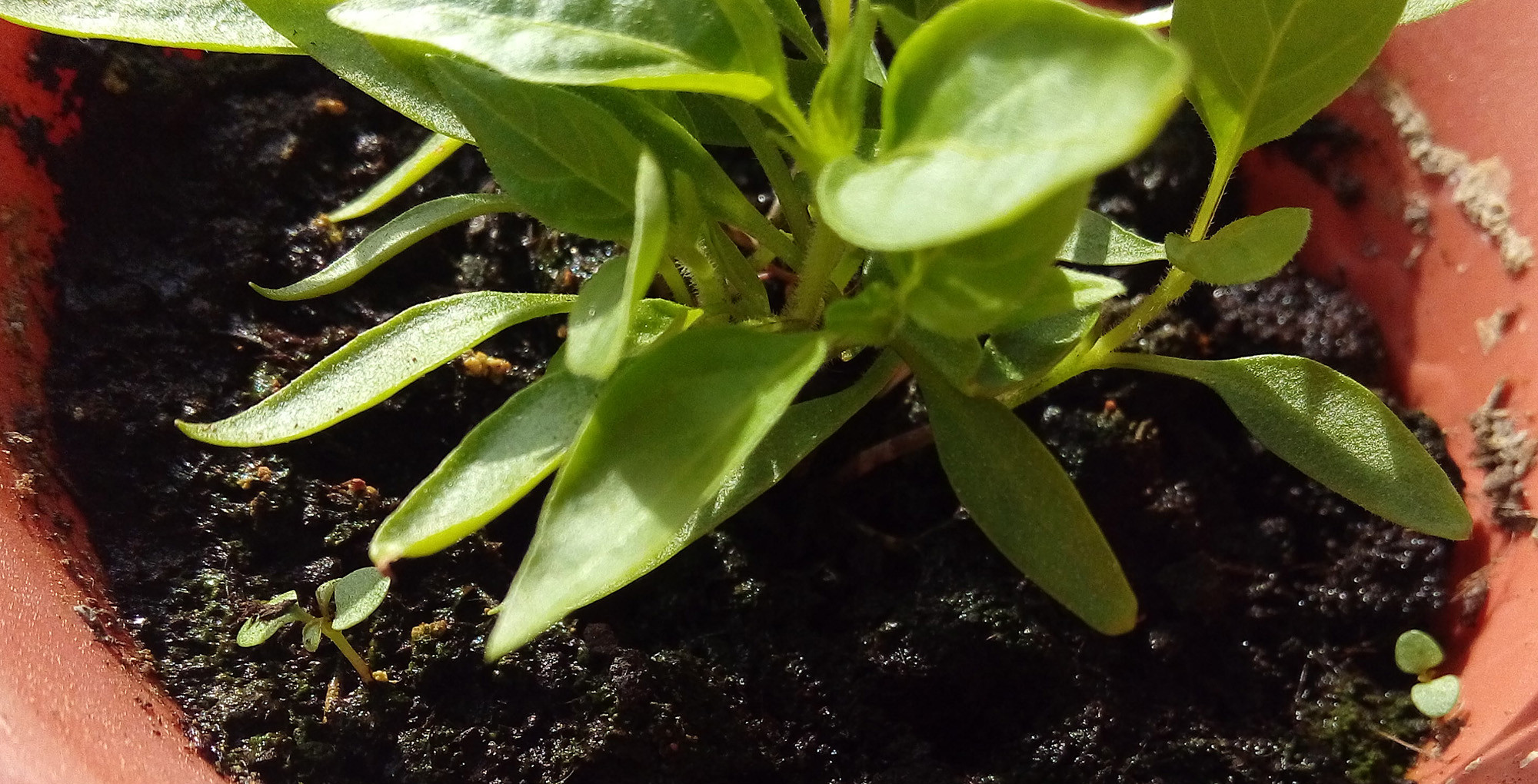 And another one where you can kinda see the seed shell hanging off its leaf (and also a bigger plant with the red stalk in the background, and my usual tomatoes in the middle): 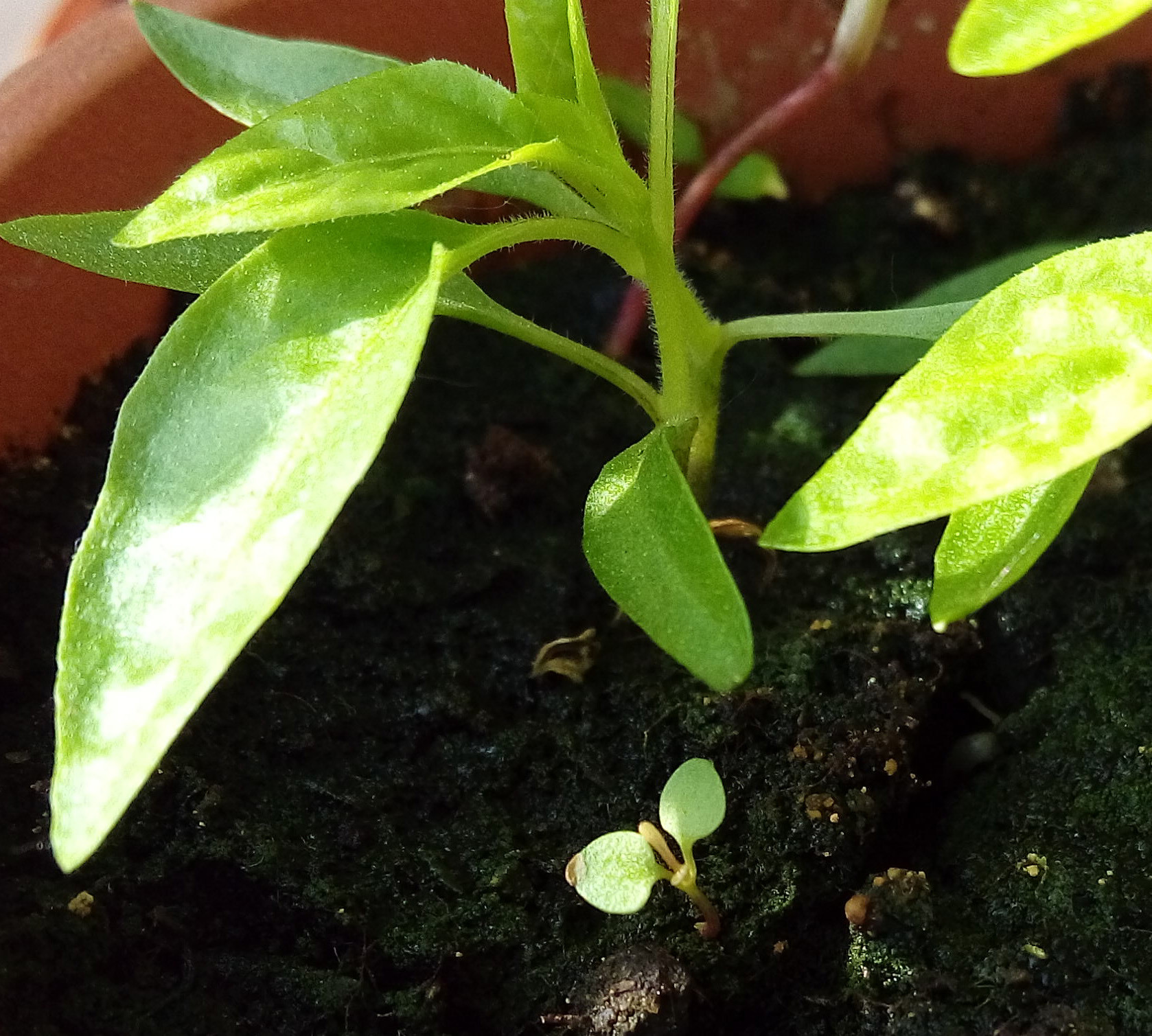 An interesting bonus − I have a dry pot where an almond wasn't growing very well, so I just stopped watering it completely a couple weeks ago, and the pot is on the balcony where rain can't get to it. But somehow, in the foreground this same red-stalked sapling is trying to grow, and in the backgrounds there's probably a mint sapling somehow clinging on (I'm gonna start watering the mint just to reward its resilience):

So, my experiments with tight tomato clusters aside, what is this red-stalked plant that has suddenly started growing in half of my tomato pots?

There are some tiny balls of fluff which the camera couldn't catch very well no matter how I adjusted the pots. I've read it might be poplar fluff carrying its seeds, but if you google "poplar saplings", the leaves look very different. It could be this fluff, or it could be something else, but because its leaves never start looking like on a mature tomato plant, and the fact that it also grew in a dry pot where I didn't plant any tomatoes, I very much doubt it's a mutated tomato.

Actually, now that I've had a closer look at some of the tomato saplings, they do have a reddish stalk, and one of them grows directly from the bunch of tomatoes. So I don't really know for sure if these aren't mutated tomatoes, or if it just got lucky and started growing in such a suspicious place.

Polygonum maculosa and yes its a weed, Bamboo right on that one.

4
Why is there such a difference in size between the same tomato plant's saplings?