Is the rapid new growth on this rose bush a sign of Rosette?

I recently trimmed back a rose bush (I believe it's a Liebeszauber Hybrid Tea Rose?) that sits in some shade in my front yard, as its branches grow pretty long and eventually start leaning into its neighboring shrubbery. The roses that had bloomed on it were now mostly wilted, so I removed them too along with the couple of remaining good ones, because I could then spray the entire plant with insect and mite control, as its leaves were getting eaten up pretty badly.

A gardener a year earlier had suspected a couple of the branches showed signed of rosette and that I should immediately trim them from the base so that it didn't spread further. I had it trimmed back pretty severely at the time, and it grew back really nicely. Being more familiar now with rosette than I was then, I have a question as to whether this bush is again showing signs of the disease. 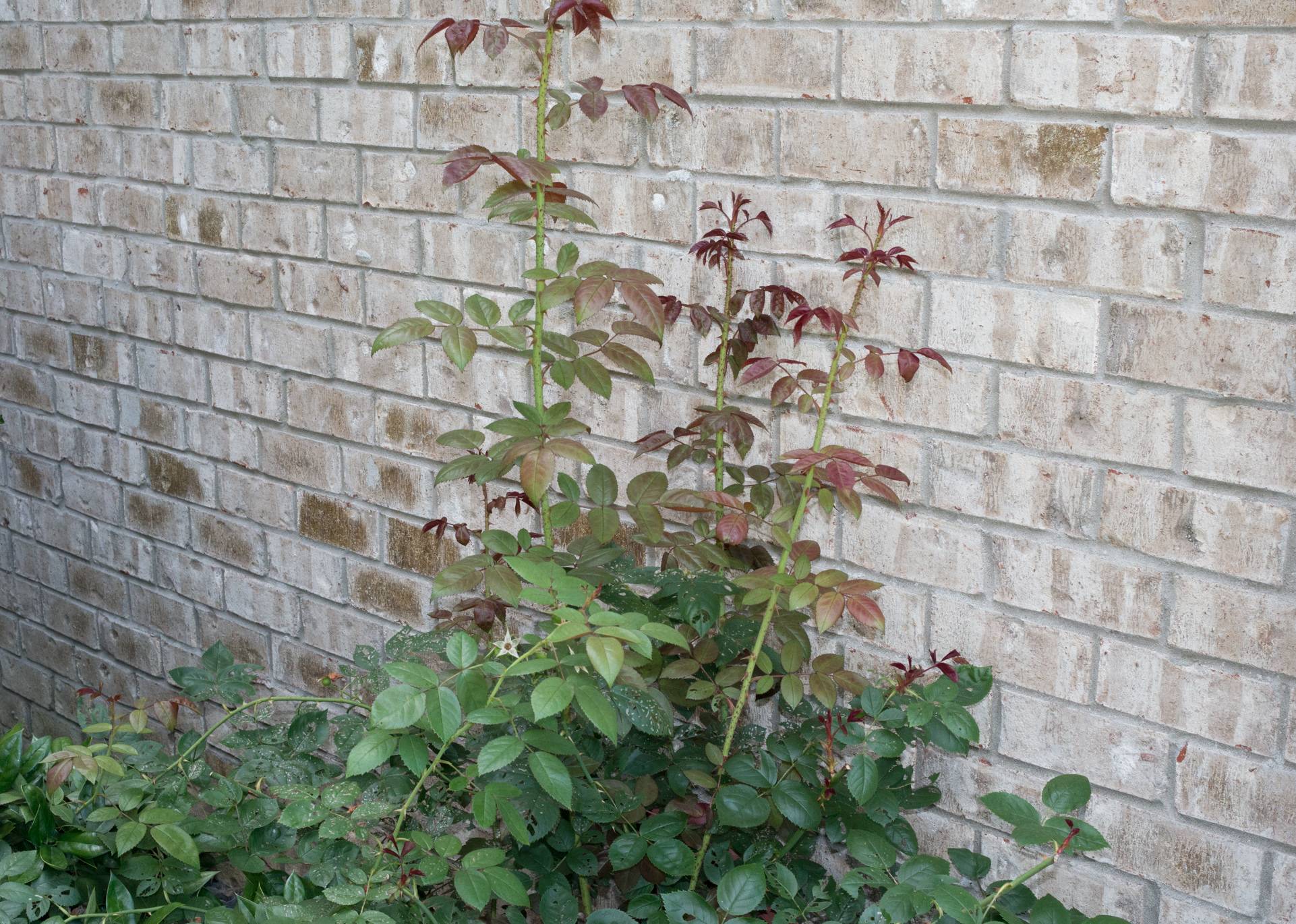 This plant's new leaves usually have a red coloration to them, and they don't currently have an odd growth pattern to them, so nothing there is out of the ordinary. I've seen examples of really bad "witches' brooms" on rose bushes, and this doesn't have that. What I'm curious about, though, is the irregular thorn pattern on these new shoots. Again, it's nowhere near as bad as other photos I've seen of plants with rosette, but I didn't know if this is cause for alarm: 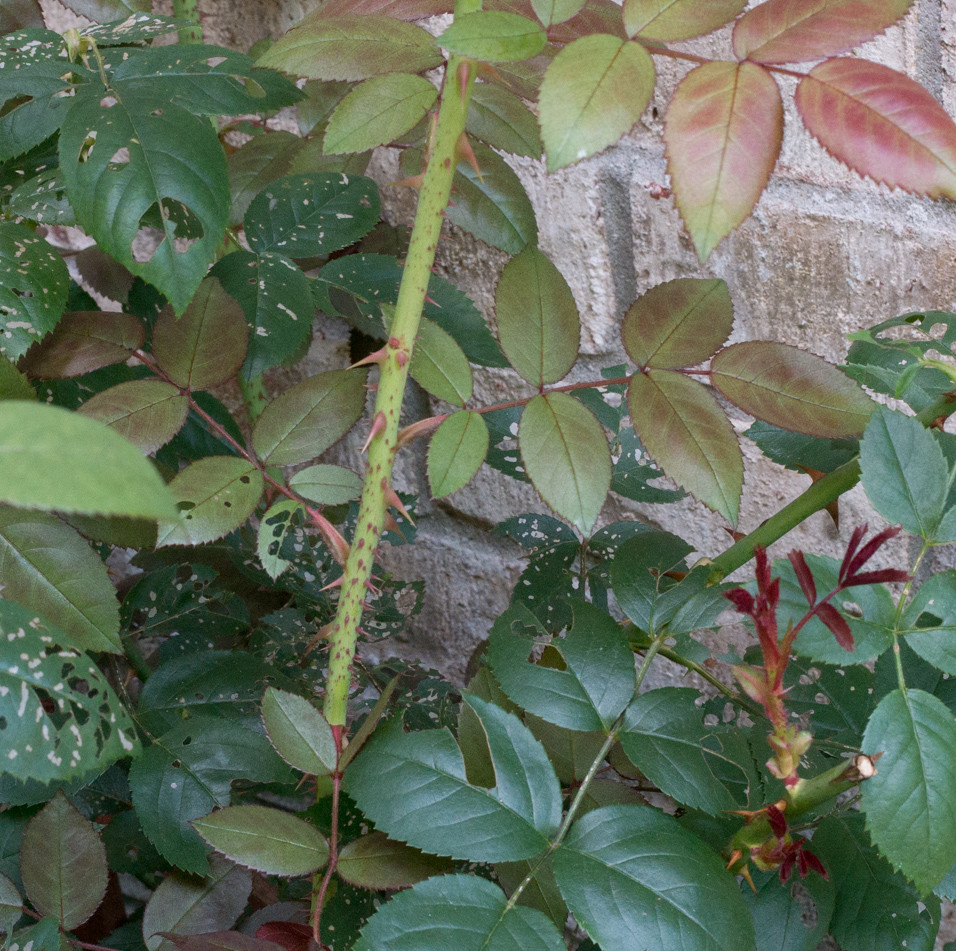 Is that normal for this type of rose when it rapidly grows back after being trimmed?

Update: here's an additional photo showing the base of the plant, per JStorage's suggestion that these are suckers from the root system of a rose graft: 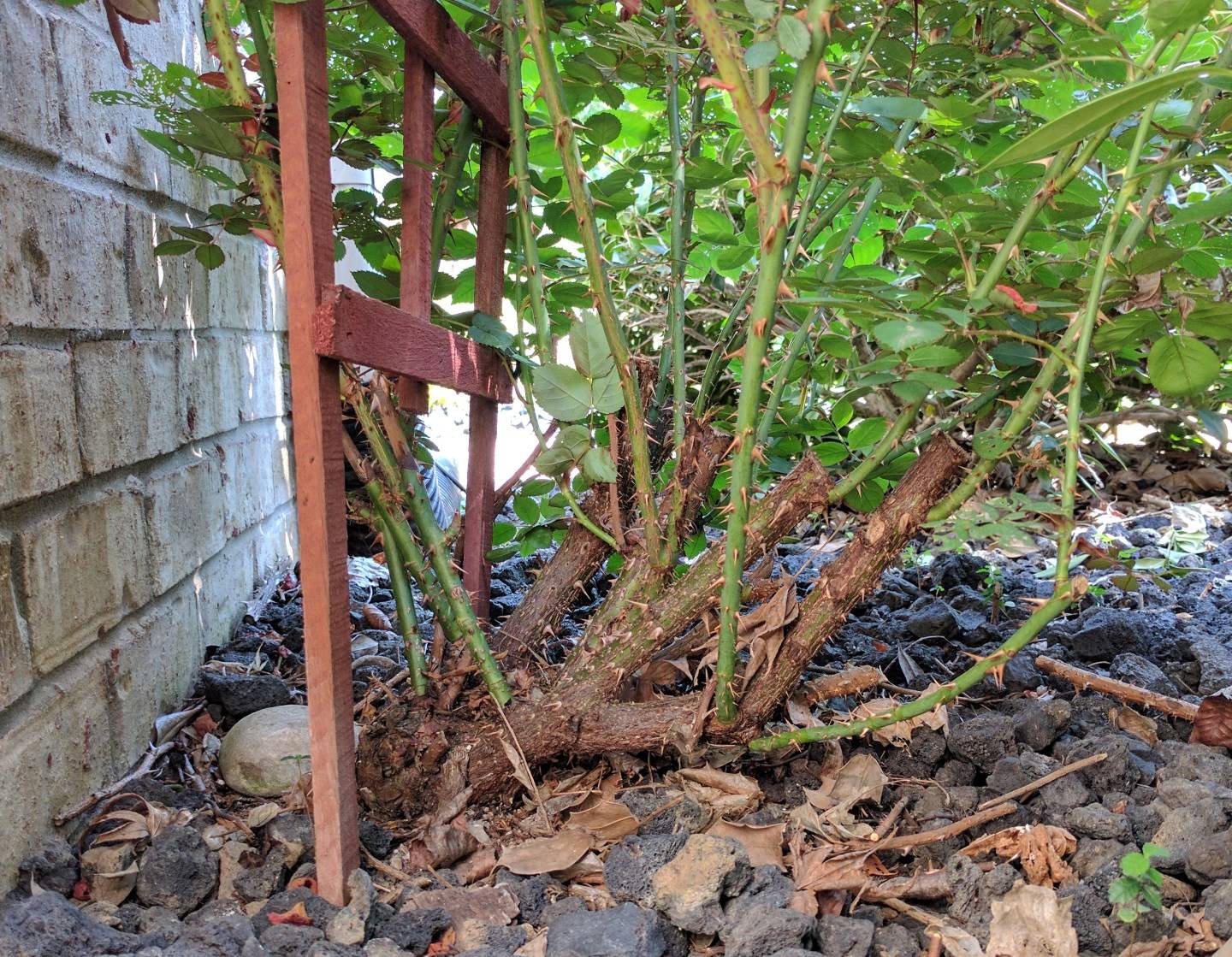 These are most likely rose suckers. You should trace it down to where they are originating from (most likely below where your rose was grafted). If that is the case, you want to remove it ASAP from it's point of origination otherwise it sucks away the nutrients thereby deriving and hurting your rose plant. Another indication is that the suckers have 7 leaves vs. the typical 5 leaves. For more information I am including some links

You've had a bout with sawfly and possibly some other insect, no big deal. The new growth is healthy. What have you fertilized with? Notice any aphids? If you don't I'll be amazed! Trim off lower non productive and damaged leaves to enhance air movement and lessen the problems with powdery mildew in a few months. Do check out the origin of the branches. If they are growing from below the graft, prune them off.

When pruning, always sterilize your by pass pruners with alcohol and cut all the way back to a main stem or a bud that is oriented away from the center of the plant. There is a great example third picture lower right. You cut back to a bud pointing towards the center of the rose bush. I would take that down to the next bud an inch or so below your original cut. This bud is oriented away from the center of this plant. Prune out some of the old growth to enable more air flow. Especially damaged leaves. Not all, just some.

I can see lots of other plants that this particularly healthy rose will be out competing for light and air flow. Your rose is very healthy. Make sure you have not used fertilizer with Nitrogen higher in percentage relative to Phosphorous and Potassium. Otherwise, lovely leaves, no flowers.

Make an executive decision about what plants should stay and remove the weaker ones that will only get weaker and cause problems for the plants you want to have healthy and vigorous. I am guessing that out of the different types of roses this is a floribunda, possibly a vine. It needs room. It will always grow vigorously and will best be served by training it on wires. Another subject. Again, your fertilizer has to be lower in N than the P and K. Tell us what you've used. That might be the reason for the vigorous growth. There are no reproductive/flower buds as yet. Normal for floribundas and vines.

Not the answer you're looking for? Browse other questions tagged diseases shrubs roses or ask your own question.

14
What can cause the leaves of a rose bush to turn black and fall off?
9
How can I stop cane borers in my rose bush?
4
When and how do I trim these bushes?
4
Hapless rose bush diagnosis
4
Rose bush diseased or natural (new growth or rose rosette?)
2
How close can I plant a new climbing rose to an existing mature plant?
3
Should I prune old dead sections of my rose bush while new growth is appearing at the base?
3
Is this Rose Rosette or just new growth?
1
Is this a climbing rose?