Why is there such a difference in size between the same tomato plant's saplings?

I have miniature "balcony" tomatoes which I've planted from seeds last year, and they gave fruit which have been sitting in the fridge slowly drying down and shriveling for about half a year. A few months back I decided to try and plant these shriveled up tomatoes without taking them apart to get to the seeds inside, just to see what would happen. I think all of them sprouted, but there is a noticeable difference in sizes of the new plants. As you would expect, most fruits have produced groups of small saplings, but some have grown into few, but much more massive.

You can barely see the gaps in soil because I used sprouting pods and planted some of them together into one pot. Why is there such a great difference between the saplings? Is it just because the bigger ones had so few other seeds to compete with for nutrients? Because it doesn't look to me like it would be that big a deal, but I may be wrong. Could it be because the roots got stuck inside the tomato fruit's skin? Or is it because some fruit have had more time to mature better than others? 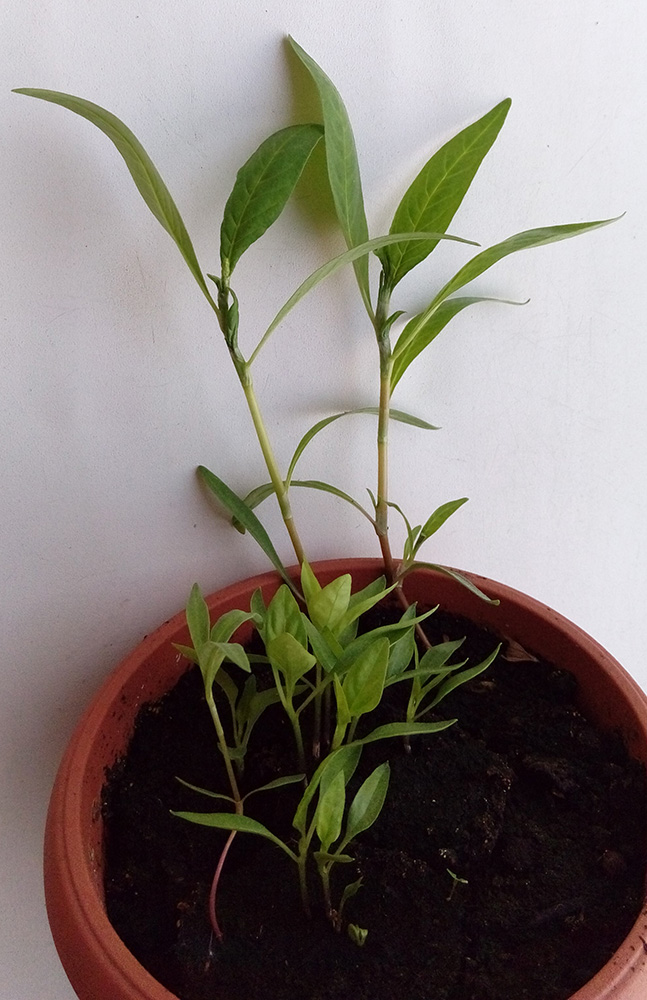 Nope, nutrients or rather chemistry is not affecting the size of these seedlings. It is genetics. One thing people need to understand is the process of making seeds where one can actually put seeds in a packet and declare it is 'such and such' and you will grow 'such and such'.

While growing your own plants and allowing them to make seed (tomato) you have absolutely no idea what pollen has fertilized the flowers and no idea what the genetics (nor genotype or phenotype) will produce. None. Pollen flies through the air; from neighbors, tomato production greenhouses, from Home Depot Garden Center. This unknown pollen is half the genetics that made the seed you are now growing. Seed to be sold is produced under very strict, sterile, sealed and controlled environments.

The difference is only genetics. Go ahead and try to separate into tiny containers (no larger than 3" please) using only potting soil.

No harm in seeing what happens; you'll get tomatoes for sure. Use potting soil, start with tiny pots and transfer to 1 gallon pots and then 5 or 10 gallon pots...all with potting soil. Add a little balanced fertilizer (not compost or any source of chemicals that you have no idea of the percentage you are adding, it has to be balanced)...start with even numbers; 10-10-10 then when the flowering begins reduce the nitrogen so that the number, the first number is less than the other two numbers; 5-7-6 for instance. That encourages flowers and reproductive growth which means tomatoes! Too little chemistry or a little too much chemistry (fertilizer) is death for plants.

Not the answer you're looking for? Browse other questions tagged houseplants tomatoes seedlings or ask your own question.

17
Do seeds from fresh tomatoes need to completely dry before they will sprout?
10
Why did my tomato seedlings stop growing after their first set of true leaves?
4
What are these abnormal tomatoes on my tomato plant?
5
Why are the leaves on my tomato seedling turning brown?
5
Will tomatoes on the vine ripen without direct light?
5
Cucumber cotyledons turn yellow and shrivel too soon
0
Should I start seeds early indoors in my zone?
1
Golden Rain Tree Seedlings
2
Grow tomatoes outdoors inside a transparent plastic box