Where should I trim to convert this ash tree in a bonsai?

Two years ago I planted a local ash tree in a pot in my balcony. It shares a fairly a pot with a maple and oak that you may see in the pictures.

The ash has been the quickest to grow and at this point I would like to experiment and try to convert it into a bonsai. I let it grow for a while to allow the trunk to widen, and it is now 70 cm tall, and a truck thick enough for my taste.

I have a new bonsai pot and my plan would be to move it there when it is ready. I thought the first step would be to trim it down to a reasonable height, but I am not sure where to cut.

In this picture you can see the tree, and I marked how much it grew last year, and how much has it grown so far. 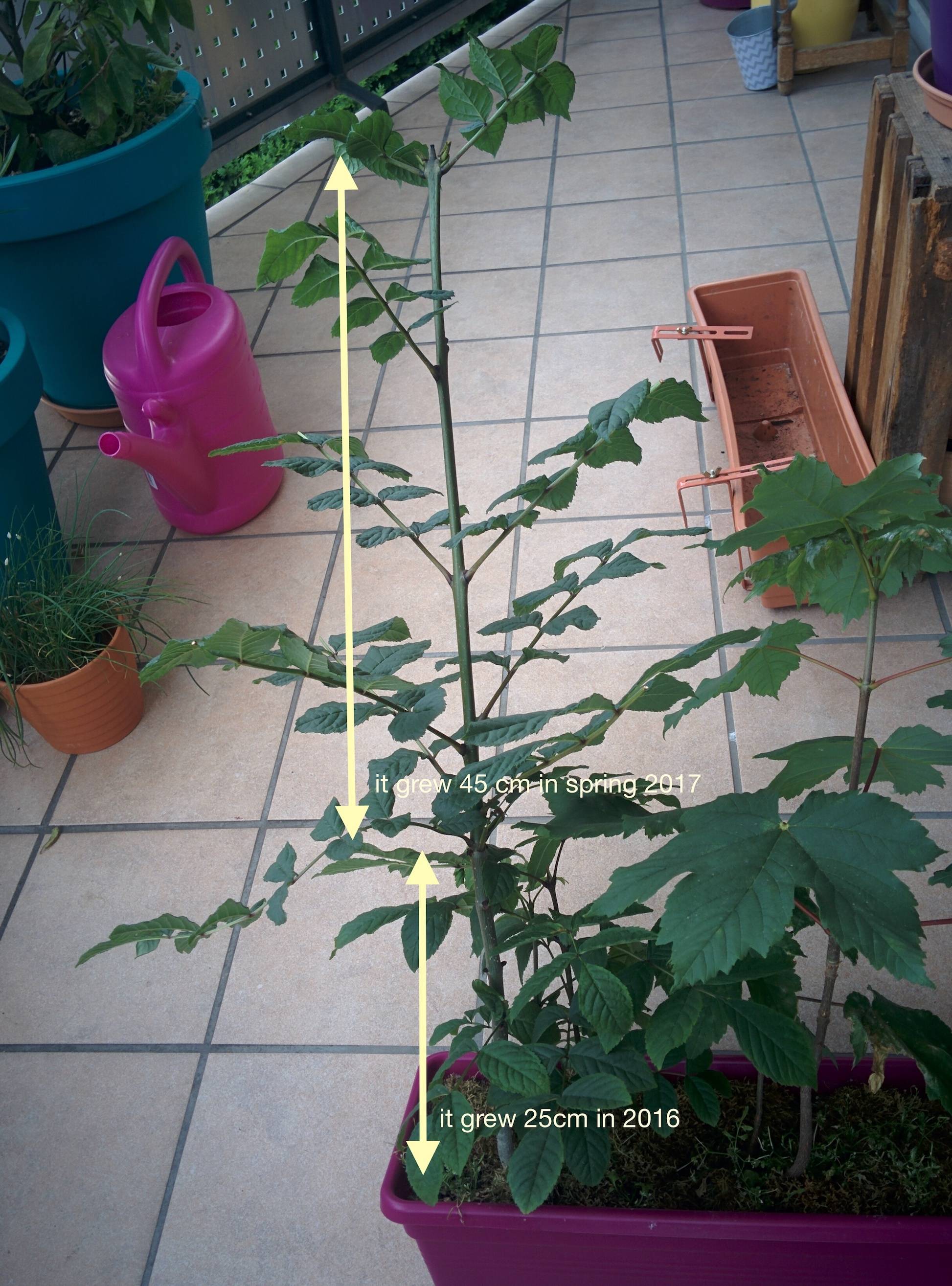 In the following picture I marked the places where I considered cutting the trunk.

Cut #1 would be at the spot right where the tree stopped growing last year and would leave the tree without leaves. But it would have a desirable height.

Perhaps it is more intelligent to make the cut at #2, so it still keeps 4 branches, giving it a better chance of recovering.

Cuts #3, #4 and #5 are just marked to facilitate discussion.

A week ago I pinched the tree at #6 in the hopes I could keep it from growing, but all I have achieved is the appearance of 2 extra buds in between the top branches and the trunk. 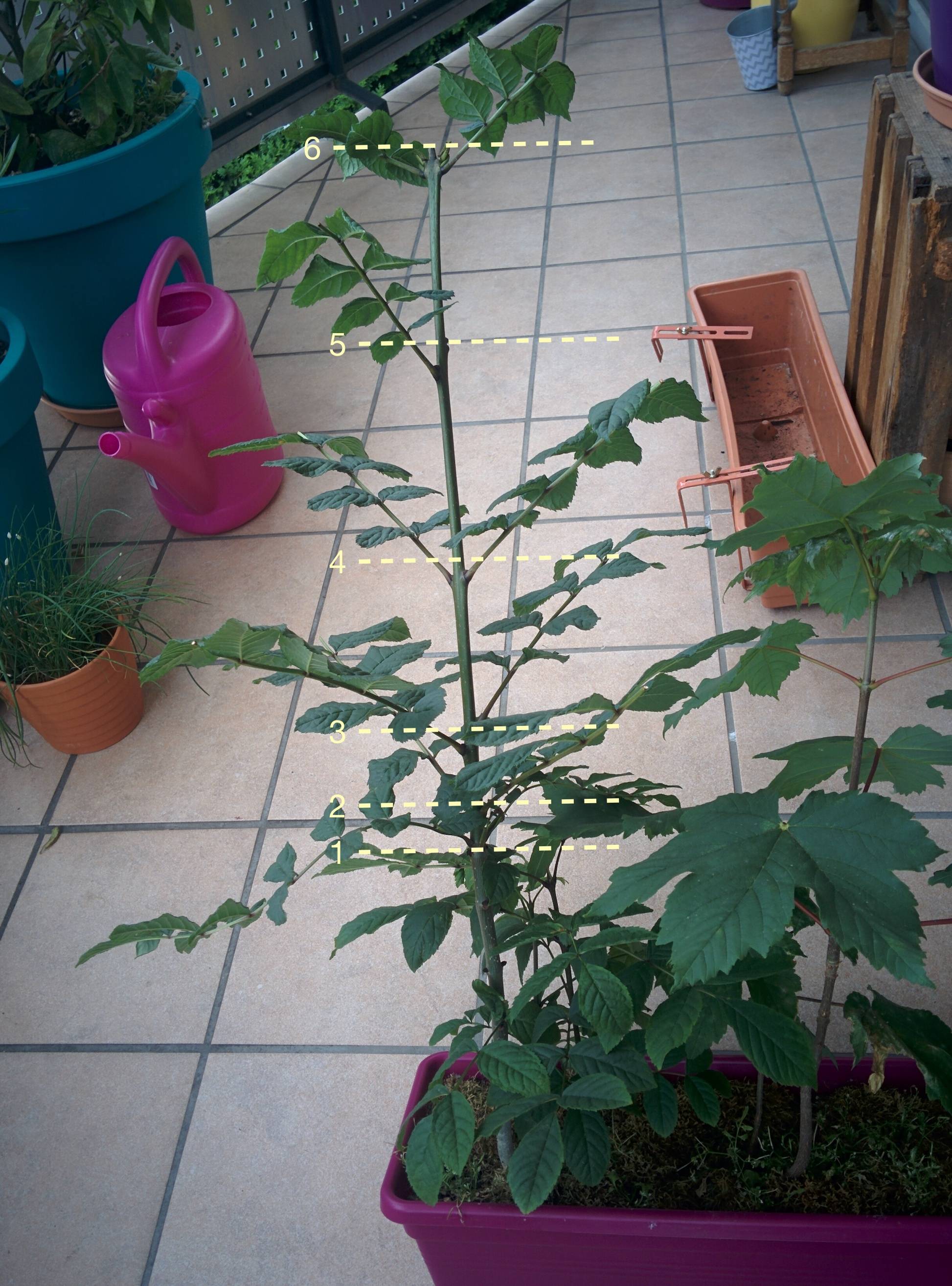 Regarding the repotting, I was thinking that I should first do the trimming on its current pot, wait a while for the tree to recover and then repot it. Does that make sense?

One of the hard and fast rules is to never prune more than 1/3 of a plant at one time. # 3,4,5,6 are redundant unless done 2 or even 3 months apart. How long has this tree been in this pot? Does it have drainage?

Bonsai are not indestructible. Perhaps the answer was meant for the Ash tree? To get this tree to be even close to Bonsai will take years to achieve. Especially this large. Do you know about root pruning? The balance necessary between photosynthetic growth and the root system?

A Bonsai pot will not have drain holes. The only type of planting in a pot that dictates no holes. Instead, the mass of roots that have been pruned and babied to match the needs of the top growth which in turn has been pruned and babied to match the size of the root system, will suck up the necessary water without need of drainage. Bonsai pretty much require daily watering (dunking) depending on their size and environment. And this tree is far from being put in a Bonsai pot.

I think this tree is a bit big to play Bonsai with...I am not an expert. A good reason I am not is because I haven't had the time and energy it takes to do Bonsai correctly. I would not try doing Bonsai without taking a major series of classes, hands on classes taught by a Bonsai Master. Not a Lowe's mass producer of Bonsai that sells to the public.

I love this art form. It is the ultimate man in harmony with plant situation. If one doesn't understand plants, growing them the normal way, one will experience failure. Japanese culture owns the most knowledgeable of all gardeners in the plant/landscape world. And they do it very well. They create landscapes that look like nary a human has stepped foot in the landscape. Forget Buddhas and pagoda statuary. Not at all a part of their expertise. Bonsai is for the elite of the elite Japanese Garden Masters. Tiny, miniature landscapes that are perfectly believable when you find yourself ant size!

One of the rules to decide what plants to use for Bonsai is either incredible fine textured bark on trunks and stems that are easily formed using pruning skills and copper wire for instance and better, tiny leaves or fine, fine textured top growth. Large leaves are not desired. Think of model making, like trees on the landscape around train sets. Fine texture is necessary. That helps with the illusion of miniature. Sure there are wonderful large leafed Bonsai but the tree is usually 2 or 3 feet not one foot and the coarse texture was exchanged for fine textured bark, easy control of the trunk(s). A plant that was amenable for choosing buds to enhance, could deal with root pruning easier and sooner for instance in exchange for the perfect tiny leafed specimen.

I am not saying your ash tree would not be a good specimen. I am saying I am loudly recommending taking classes. You have your 'model' for class! The Maple beside it is only getting its roots entwined and like Siamese twins one or the other might die in the process of surgery.

I like the multiple trunk Bonsai! But you've got a long way to go before doing any pruning. Pruning the top growth will only energize the entire plant to grow more quickly. Root pruning is critical. Fertilizing just enough is critical. Just chopping this guy off does not a Bonsai make. Such a super time to take a Bonsai class! From a Master. If they don't speak English shoot go learn Japanese or Korean or whatever. They will be teaching hands on anyway! You will know if you screw up let me tell you! Grins.

I've taken bonsai classes, though I'm mostly a beginner, so feel free to use my advice as a jumping off point and do more research.

Bonsai pots, like Hazel commented, do have drainage holes, and they do have to be watered frequently. That's been my downfall with them and I'd recommend some kind of watering system on a timer if you aren't good about checking on the dryness on a regular basis.

So basically, bonsai is the art of training a young(-ish) tree and making it look like a tree that's lived hundreds of years and seen all kinds of storms, snow, ice, etc... There are multiple styles and you need to look at them and see which one is best for your tree.

Overall, the general rule tends to be that you want the first 1/3 of your trunk to be bare (again, there are exceptions based on style), then you start with your primary branches. As you move up the trunk, it should taper and the limbs should get smaller.

You can decide the size you want your bonsai to be an that will affect how you grow it out. I've seen bonsai on youtube that were micro sized and some that were massive.

You had a good idea that is frequently used when you try to grow a bonsai from seed. People will pot them, or even better, plant them in the ground to get much quicker growth. A bonsai should only go into a bonsai pot after you've gotten all the basic growth that you want. Bonsai soil is almost completely inorganic and some people prefer to grow in soil that is totally inorganic. So you aren't going to get a lot of growth after it's potted in a bonsai pot. I would repot this in it's own pot, or stick it in the ground and work on pruning it to get the desired structure you want.

Something to keep in mind is that if you want to thicken your trunk, you need more growth on top. Plants put on thickness to support further growth of the tree. If you cut it off, then your trunk won't thicken much more. Sometimes, people even leave undesirable branches growing low, to thicken the trunk before removing them. If you're happy with your trunk thickness, then it's time to start taking it down to size.

Stormy had some good points. It's unhealthy for a tree to have more than 1/3 of it's mass cut off at once. Some plants will survive it, but they're stressed and it takes them longer to recover from a massive cut back than if you did it gradually. This in bonsai, so you're in it for the long haul. I'd probably repot it now and then when it's recovered at the beginning of next spring when the new buds are starting to form, I'd prune it back by 1/3 or an inch above a node. Like you noticed when you pinched the top, it created back buds. There is a chemical in plants and when the tip of a growing branch is damaged or cut off, it sends it back down the trunk and creates back branching. That's what you want to occur. Then you'll be able to pick the branches that are stylistically best for you. Repeat this, cutting it back by 1/3, till you get it to the desired height.

Plan ahead and you can do a method where you make a small new branch the main leader by binding it upright. Some people cut the main trunk on an angle, notch it, and push the new leader into the notch before binding it. The idea is to cause the trunk to grow and trap the new leader. Keep researching and using methods like this to create the bonsai you're looking for. Keep in mind that the tree tends to determine the style. You can do a lot of manipulation, but it's better to pick a style that the tree already leans toward, instead of fighting it.

Also, while it make take you years to get really good at it and create a master piece, it's really not a hobby anyone should be afraid to get into. I suggest people do some research, watch some youtube, take a beginner class if ones available, but go out and buy some plants that look good and start giving it a go. Just like with any plants, I don't suggest that people get one and put all of their hopes into it. If you have a couple going, then if one dies on you, it's a loss, but not a devastating one. You can also compare and contrast. One can be your practice bonsai and the other can be the one you use what you learn on. I do recommend that you pick something like a shimpaku juniper, a box wood, or something similar that already has small leaves. Your ash has good sized leaves on it and this will throw off the look of the tree. You'll have a small tree with proportionally massive leaves. There are ways around this and people will defoliate the tree a try to cause it to always have small versions of the leaves, but as a beginner, I recommend something like the juniper that already has very small leaves. This is less work and stress for you. Good luck.

Not the answer you're looking for? Browse other questions tagged bonsai repotting trimming or ask your own question.

4
Chinese Elm bonsai turning yellow after repotting
7
Bonsai identification and pruning tips
10
What is this bonsai tree with serrated elliptic leaves and why has it lost all its leaves?
4
Can I re-grow roots from a piece of a trunk cut from my green ash tree?
2
Jabily/elephant tree (Operculicarya decaryi) bonsai
6
How can I grow an in-ground 'bonsai' oak tree?
2
When should I plant my tree saplings into a bonsai pot?
6
Should I cut the top of my schefflera?
4
Jade tree trunk cut?