What is wrong with this Norway spruce? 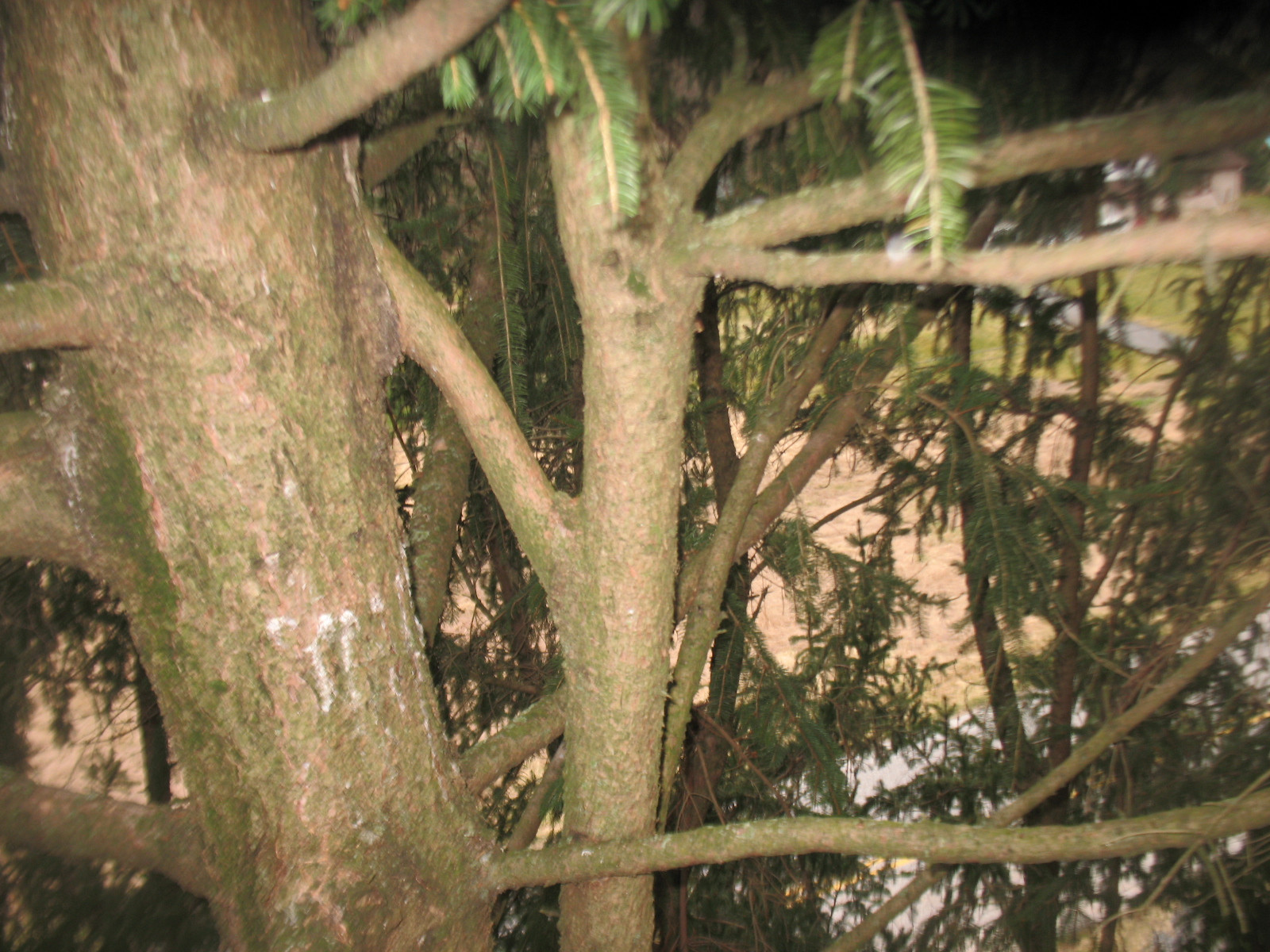 This Spruce tree is very odd. I have a few questions about it. First of all, how did the branch segment pictured below grow there? It grows right out of the smaller trunk into the larger one, without branching. This segment increases in diameter each year, like a normal branch. My second question is, how did this tree get its branching habit? It is very unusual for a norway spruce to grow that way. The lower branches are extremely strongly developed, and curve upward until they are growing parallel to the trunk. The lowest branches grow to within ten feet of the top. The tree is very vigorous and spreading. Why does it grow this way? 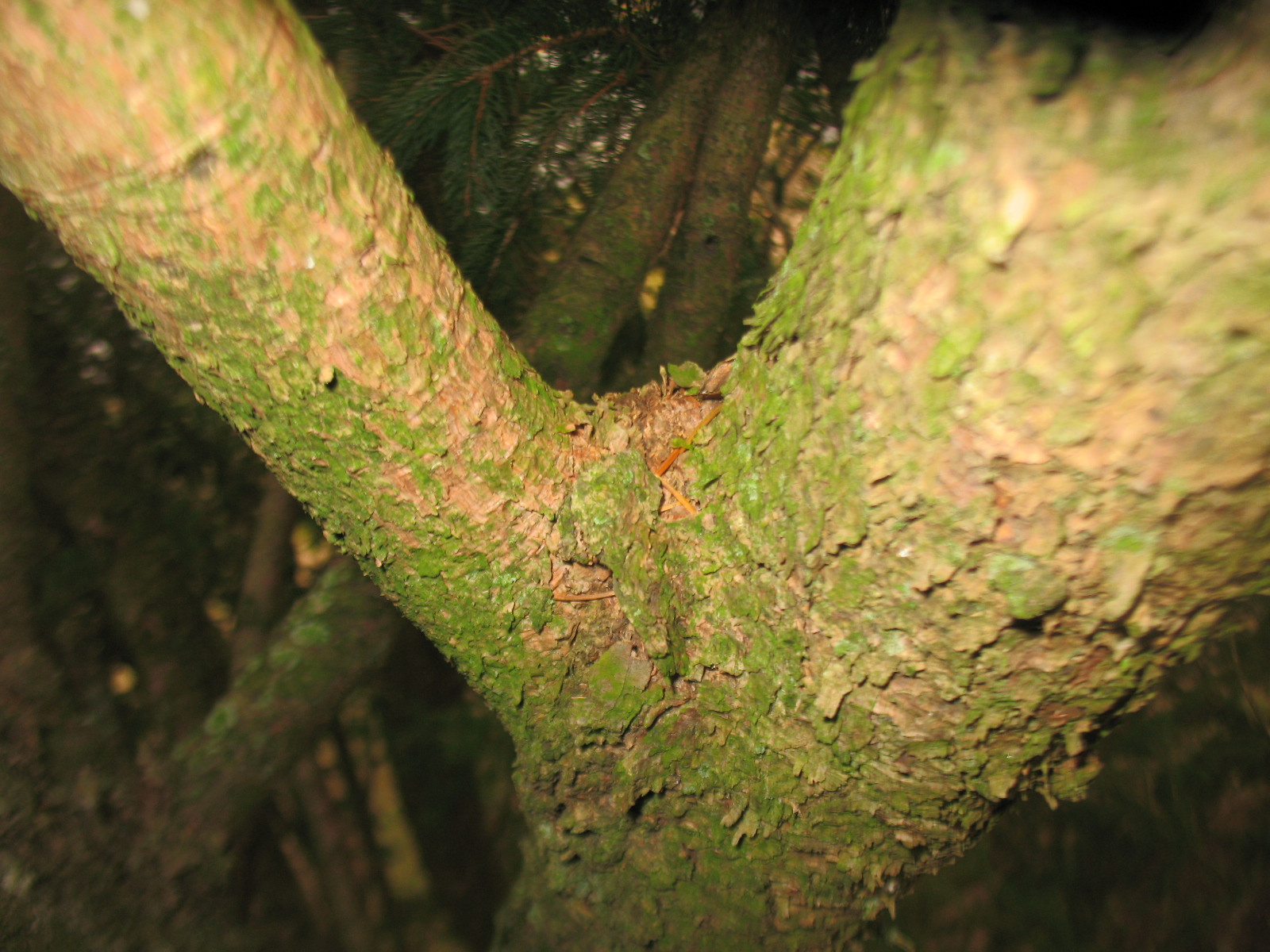 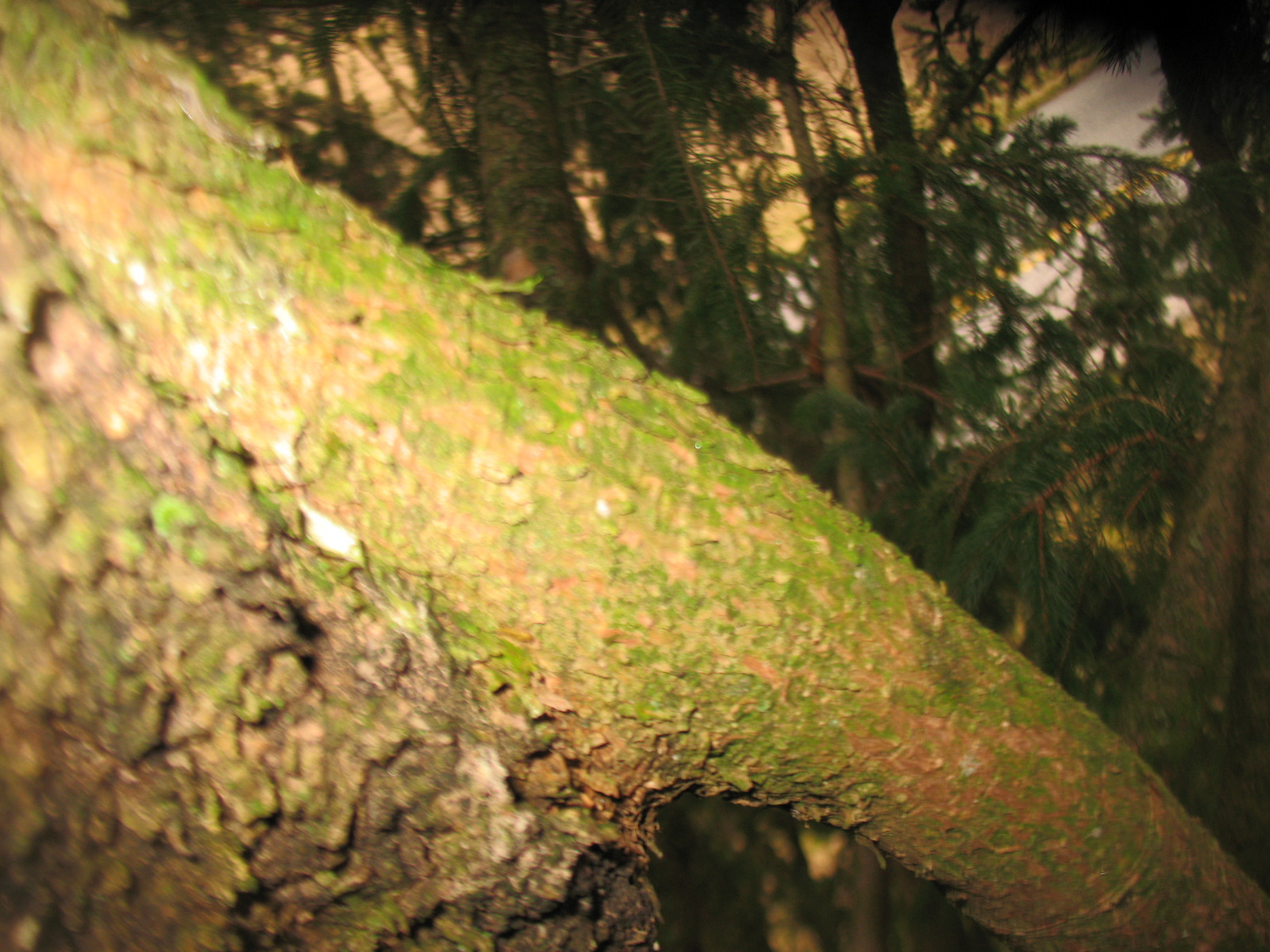 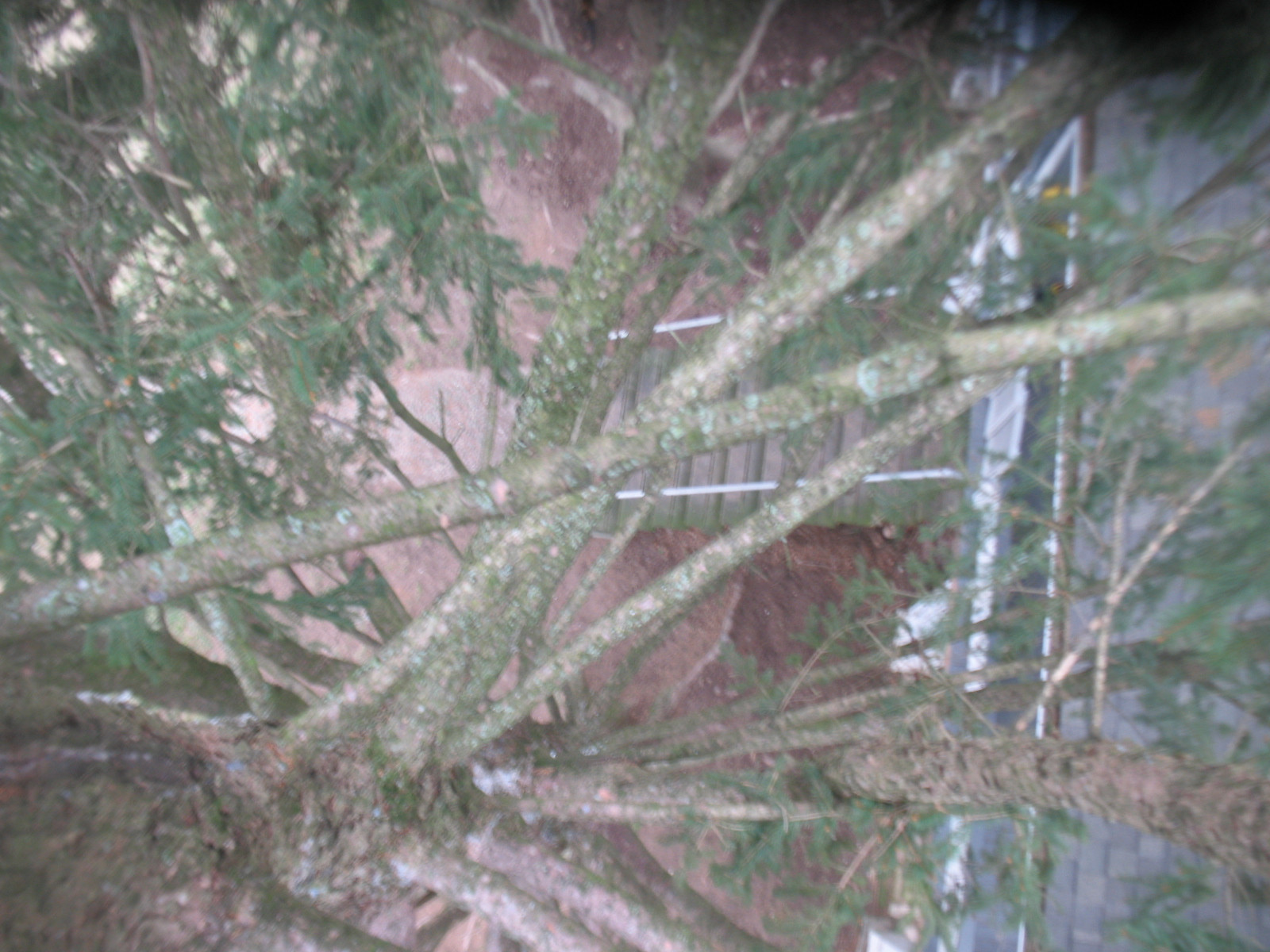 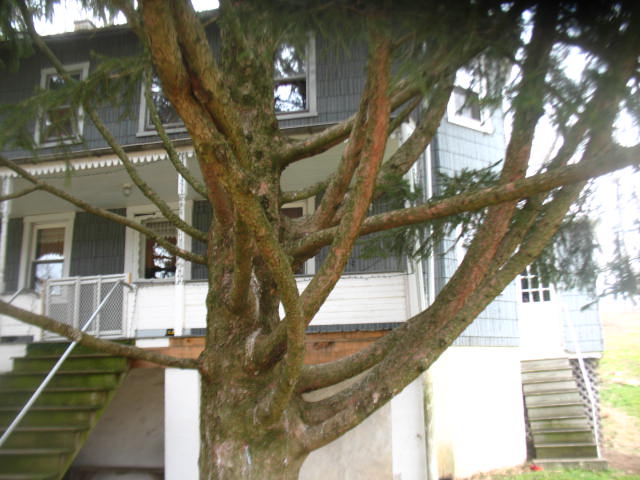 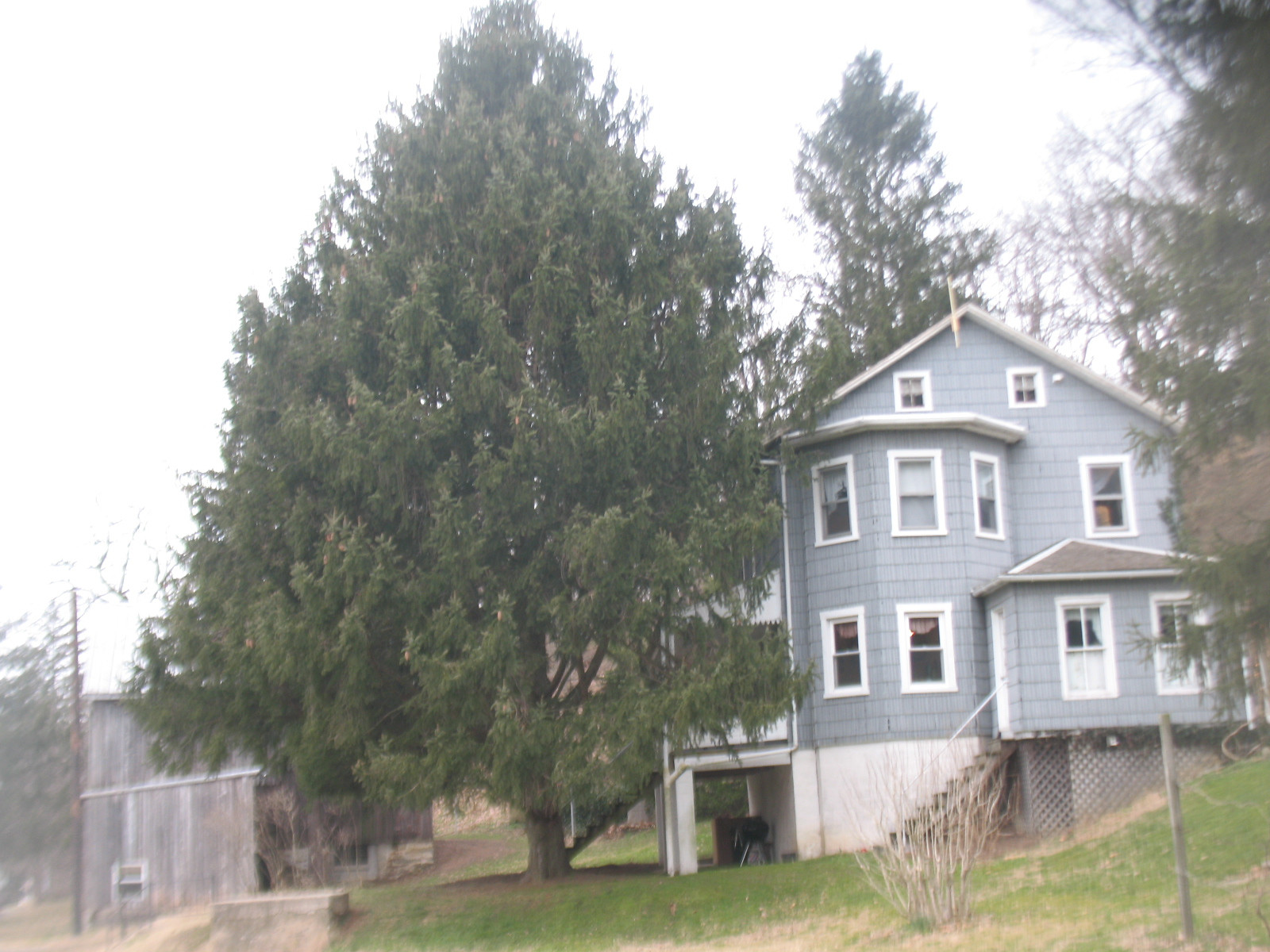 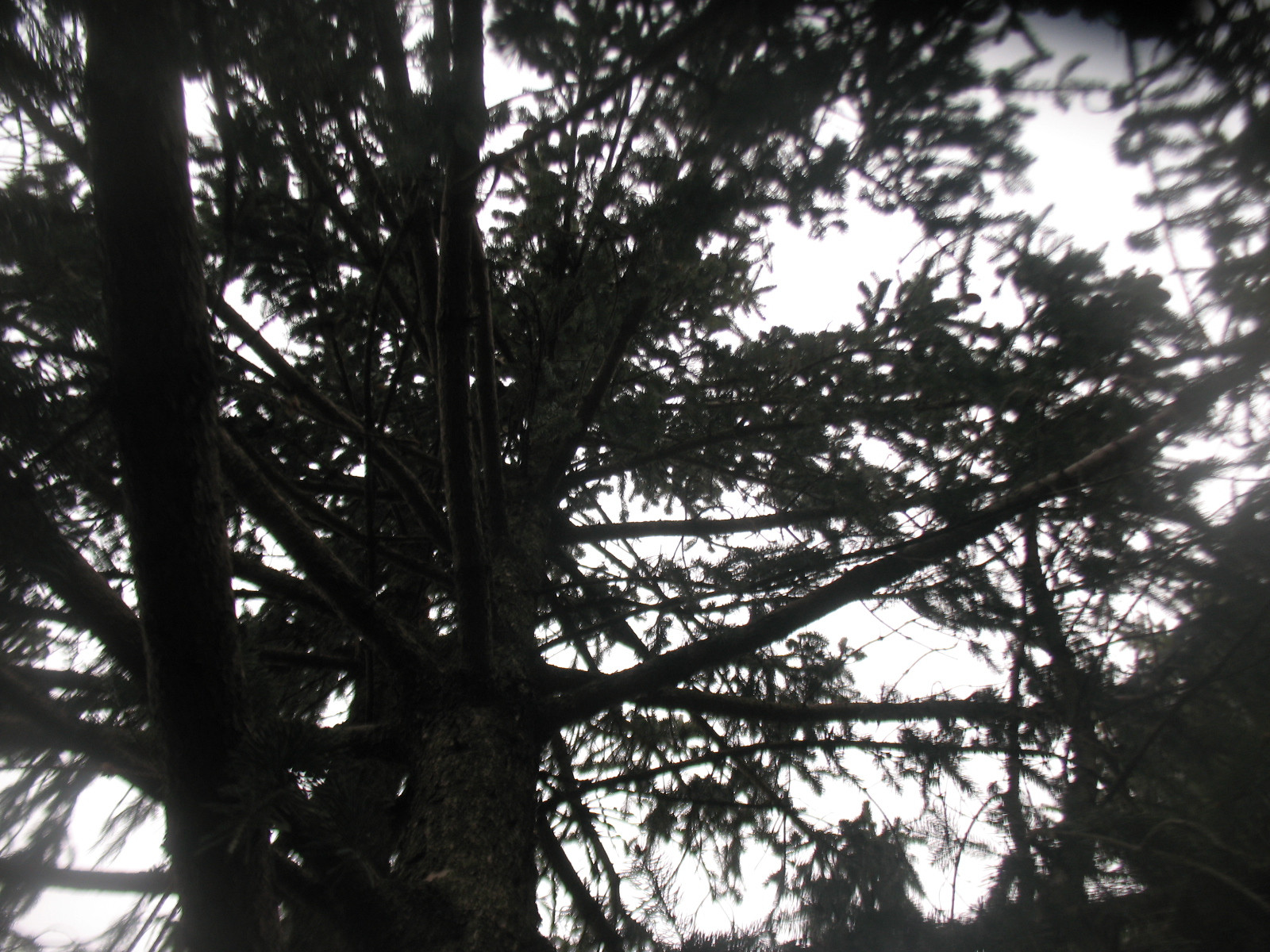 I'd guess that when it was young, the leader was cut just above where all the odd branches come out, at two different heights, and maybe more. After that, the top candles all competed to be the new leader. The odd branches that turn upward were the losers. The normal branches above that are off of the "winner" that became the new leader.

I suspect the odd intersection happened the opposite of the way you described. The smaller branch was there first, but as the new trunk grew in girth, it grew into the smaller branch. This happened because of the topping described above, and subsequent neglect. The fancy term for this is inosculation. This is used deliberately in tree shaping.

The branch segment you see will be a structural problem for the tree. It should be trimmed out. If allowed to grow it will cause a second large trunk and for the tree to get a "forked" shape. This will increase its vulnerability to winter storm and wind storm damage. My southern magnolias sometimes develop these branches and I cut them off before they get big and become a threat to the tree.

Not the answer you're looking for? Browse other questions tagged trees growth spruces or ask your own question.

3
Willowbranch in small pond: it grows, but what now?
4
What should we do with a 7-8 year old honey locust tree that has been damaged by disease?
5
Is my maple tree in trouble?
3
How to Get Indoor Avocado Tree to Branch Out
7
How important is full sun for a Blue Spruce tree?
6
How should I prune my persimmon tree that has a lot of thin branches growing upward?
1
What could've caused this strange split in this tree branch?
4
How much damage will tree house, swings, etc., do to my linden tree? How to reduce damage?
5
Very few needles on lower spruce branches
1
Does white spruce have new growth only in spring?