Is my cactus infested with mealy bugs?

I have had this cactus for about 5 (or more) years, and have been treating it pretty shamefully due to me only recently researching how to garden and unfortunately being one of those who didn't care too much before. I want to keep it alive, as it was originally a tiny cutting from one of my grandmothers cactus'. 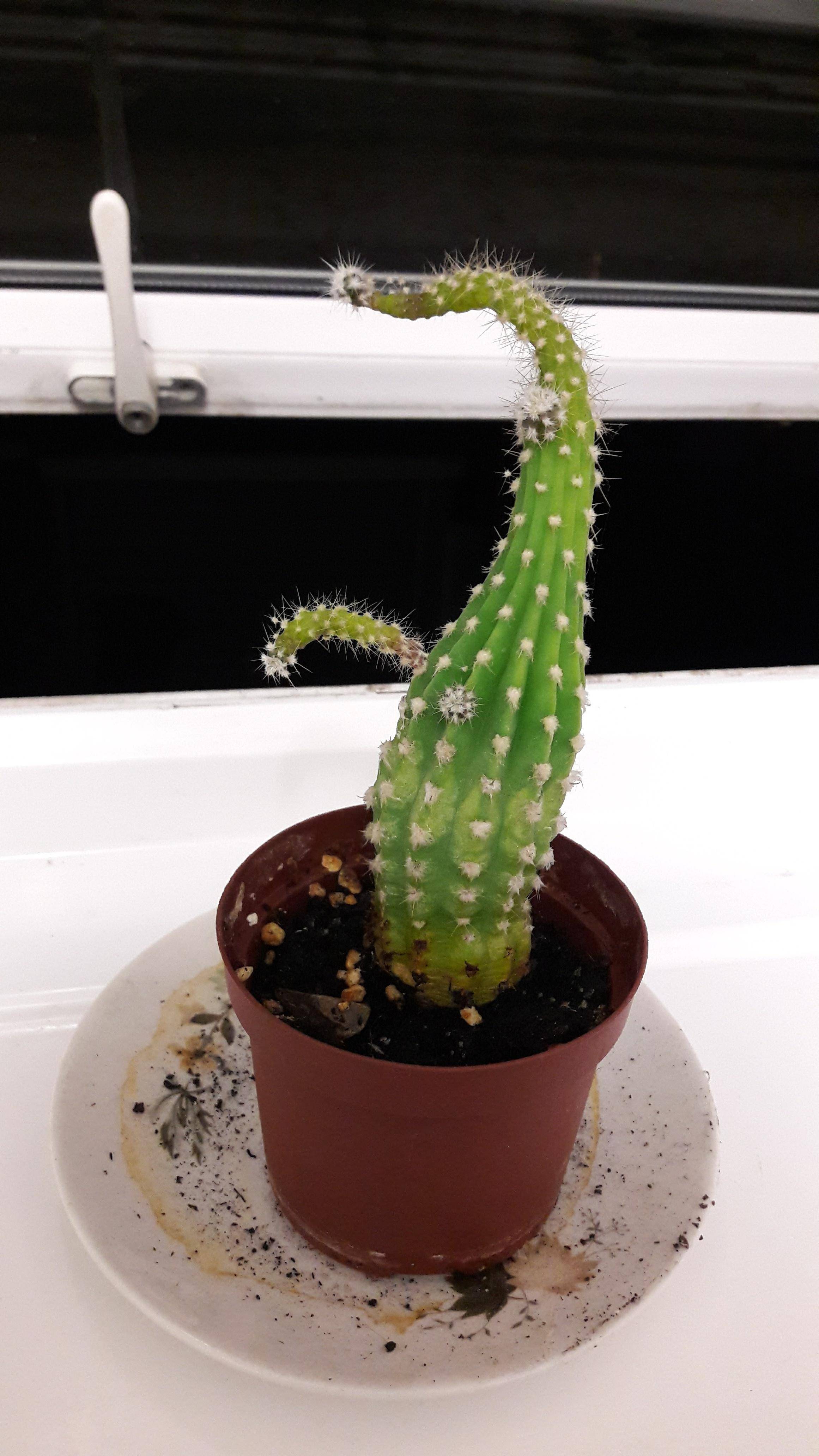 She had potted it in a tiny pot with a lot of drainage stones at the bottom, which was perfect for the baby but I am aware it needs repotting now. Water doesn't seem to stay in the soil at all now, just drains straight through. Was planning to put into a pot 2-3x the size with fresh potting soil (I assume it can handle the same soil as my herbs do?). That's easy enough. I'll keep it inside at a window as that's where it's been it's whole life. 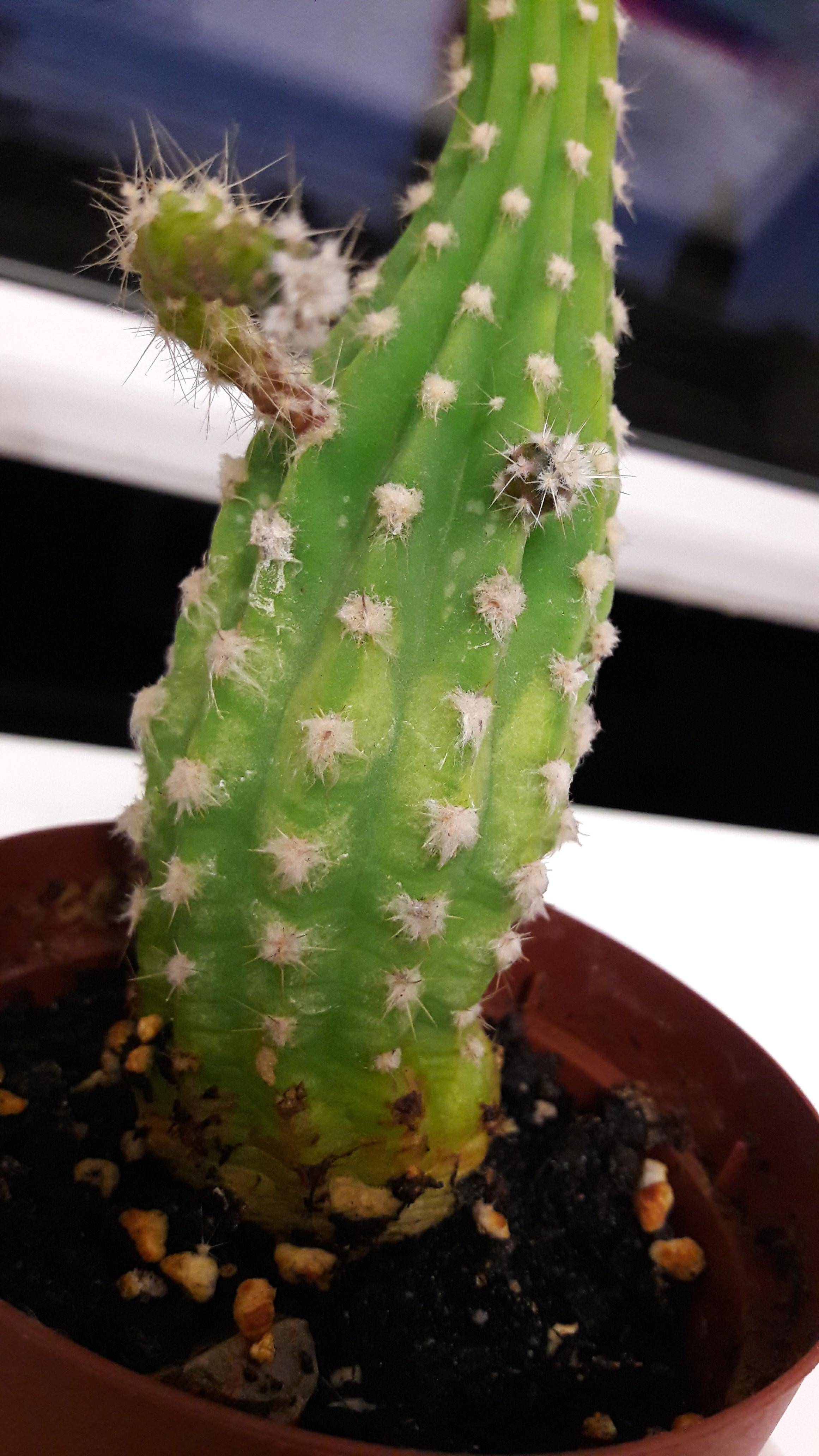 The problem is that i'm worried that this white fluff that i've always dismissed as part of the plant is mealy bugs. In the above picture you can also see white discolouring around the middle of the plant. I don't know what kind of cactus I have, unfortunately, but my grandmothers ballooned out into a ball shape and mine never has even after 5 years. I've put this down to mistreatment (it was left on a kitchen shelf in my parents house for 3 years with sporadic watering) but apparently mealy bugs cause stunted growth too. It keeps growing up, not out. Is it just because it was originally an offcut 'stem' so it's never going to become a ball? If it is mealy bugs, is this a huge infestation that is going to be really difficult to deal with?

Thank you for any advice! If anybody might know what kind of cactus this is so that I can research online for how to look after them, that would be really great too. :)

The white tufts around the cactus's needles are typical, especially because you said its been there for over 5 years. Mealy bugs congragate usually groups and don't evenly spaced on a plant's surface. The pot is too dried out and has a hard time retaining water. I use a trick very sparingly to rehydrate soil, especially succulents and cactus.

Take a bowl that is the height the pot and put the plant in the bowl. Fill the bowl to the top slowly with water. Let it sit for 30 minutes in the water, then remove the cactus and let it drain. The soil will be fully hydrated and will accept water more readily. Don't do this more than once or twice a year with cactus.

Also, buy a deep saucer and water it from the bottom that will be better for the succulent. Fill the sauces and pour out any water that is still in the saucer 15 minutes later.

The shape of your cactus is due to inconsistent watering. If you are consistent, it might fill out over the next year or two. Also, in the winter only water once a month for Oct through March assuming a Northern Hemisphere.

I know this is vveerrryyy late and this is mostly for anyone who finds this by looking up if their plant has mealybugs, cacti can collect fuzz so don’t be too worried Espinoza everything else is just fine! Also with reporting, a terra cotta would be best. Anything other than that is good for succulents that need more water than others. Also the soil, be careful and use a well draining soil! Miracle grow makes a special cacti soil now a days. Or you can make your own!

Not the answer you're looking for? Browse other questions tagged identification diagnosis plant-care cactus cuttings or ask your own question.

8
cultivating a cactus from cutting
3
Why does my repotted cactus seem to be dying?
3
Flattened/Deflated cactus, snapped cactus and white spots
3
Cactus turning white/brown/yellow
4
Is my cactus dying?
5
Is this white cottony stuff on my cactus normal?
2
Cactus identification
1
I noticed some tiny white bugs on my Calathea, could they be responsible for this?
2
What are these white spots on my cactus? Note: they are not cochineal bugs (as I know them)