What plants will grow successfully in an outdoor patio with non-direct light?

What plans can I grow successfully? I have hooks that can hang from the ceiling of the patio area, and I can also put floor potted plants on the patio. I would prefer plants that bloom, though I'm not particular on the style so long as it's relatively low-maintenance. (I am very likely to forget to water it morning and evening, so I'd prefer plants that only need water once daily or every other day, et. al.)

The climate is a general midwest climate, it's in Toledo, OH, United States.

Toledo, as with much of the Great Lakes region, has a humid continental climate (Köppen Dfa), characterized by four distinct seasons. Both temperature and precipitation vary widely seasonally. Lake Erie moderates the climate somewhat, especially in late spring and fall, when air and water temperature differences are maximal. However, this effect is lessened in the winter by the fact that Lake Erie freezes over in most winters (unlike the other Great Lakes), coupled with prevailing winds that are often westerly. During the summer, southerly and westerly prevailing winds, combined with warm surface waters of Lake Erie, negate the lake's cooling effect. In addition, the lake increases local humidity, adding to discomfort on hot days. 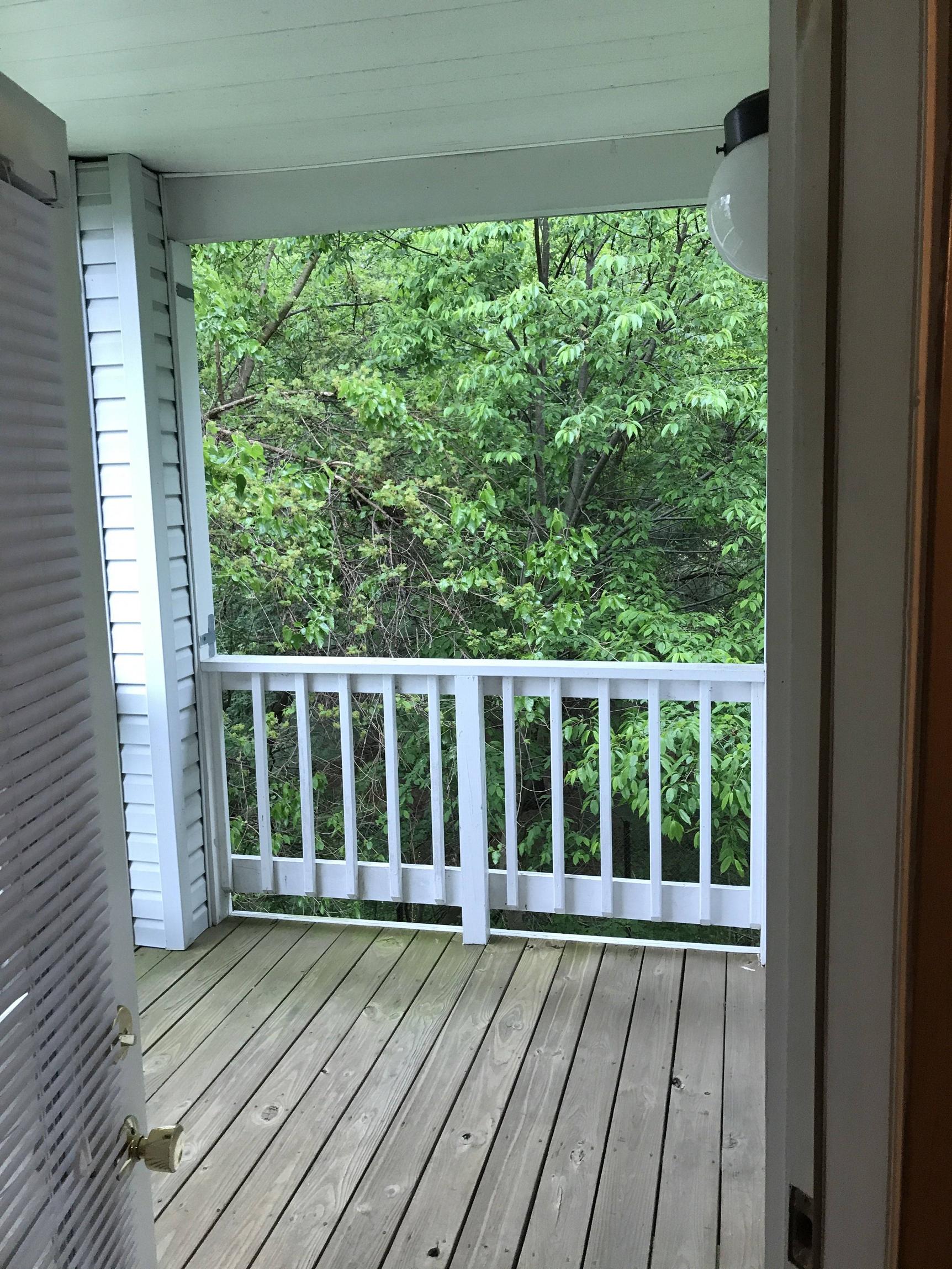 The patio extends no further left than that beam. The portion towards the tree-line is the east side of the patio, and is the part that is the source of the very spotty direct sunlight.

That's a situation strictly for shade loving plants - the ceiling or roof over the balcony reduces ambient light levels significantly, whether or not dappled sun might reach plants near the edge. It looks as if the shrubs or trees outside are broadleaf and therefore deciduous, which might mean more sunlight in winter, although I can't tell if there's some ivy in there, which doesn't lose its leaves.

In terms of plants which produce bright flowers, assuming you get frost in winter, you're pretty much restricted to summer bedding type plants such as begonias, impatiens, lobelia, pansies and fuchsia. If you have frost free winters, some of these will go on for a year or more - hardy fuchsias are perennial, but are frost sensitive through their roots in a pot.

Some evergreen plants will cope with the low light levels, but they'll just be green, so Buxus (Box), Fatshedera lizei, Fatsia japonica, Prunus laurocerasus 'Otto Luyken', Skimmia varieties - if you want berries on Skimmia, you need a male and female plant, otherwise choose one like Skimmia fragrans, which does well in shade and, as the name suggests, has white fragrant flowers. Pieris forresti will do fine (P. japonica varieties need some sun) but need ericaceous (acid) potting soil. Camellia might work too, again, ericaceous potting soil. Note that Fatshedera needs support for its 4 foot stems, Fatsia will only be good for 5 years or so in a pot, but the Prunus mentioned will do fine in a pot for a long time provided its big enough, although it's not a particularly exciting plant. Otherwise, perennial plants like Astilbe (needs damp soil), but being perennial, they disappear in winter. English ivy would be good in a pot suspended from the ceiling - choose a Hedera helix variety though, they're a bit smaller than some others. Glechoma hederacea (sometimes sold as Nepeta variegata) will probably be fine in a hanging pot too, but it does get rather long and you'll be bumping into it when you walk out there, and it is only semi evergreen in chilly winters. If I think of any others, I'll add them later.

Not the answer you're looking for? Browse other questions tagged plant-recommendations or ask your own question.

27
What plants will deter mosquitoes?
6
What flowers and shrubs will grow without outside help?
20
What can I grow in a sealed office environment with no natural light or airflow?
8
What plants can grow in bathroom humidity with no direct sunlight?
5
What vegetable/fruits plants will rabbits not eat?
7
What Would Be A Good Shade Tree for Oakville, Ontario, Canada?
4
What edible, winter-hardy plants would grow well on my northern patio?
3
What tree will grow acorns quickly?
4
What companion plants will help the growth of young pines?