Should I prune old dead sections of my rose bush while new growth is appearing at the base?

My daughter gave me this rose bush last Mother's Day, which was exactly a year ago. It was planted in a large pot and purchased from a nursery. It's called Fragrant Plum, from this company. It grew nicely, and produced flowers in a beautiful combination of blue and purple I'd never seen before.

I trimmed the flowers throughout the summer, but never pruned the plant. Any areas that look like branches have been cut off came that way.

The plant appeared to have died during the winter, so I had given up on it, but I just found new growth way down at the base. Now I'm hoping I can save it.

The long branches that bore flowers last year appear dead. They're stiff, have no thorns, and, although one is partly green, neither shows any sign of life.

The very dark branches attached to the base do have thorns. There's even a little bit of new growth at another area where one of those branches meets the base (which I called junctions for lack of a better word), that wasn't visible when I took this picture last week, so I'm optimistic.

I think in general we're not supposed to prune shrubs during budding season, but I'm wondering if this plant is using energy to try and support the dead sections that would be better spent on the actual part that's growing.

Update: After receiving Bamboo's excellent advice, I tried twice to approach it to prune the dead growth. Each time I got close to it I acquired ticks, so I gave up! We've been watering and taking care of it as we always did. I just checked it today, June 3, 2017. Sadly, all signs of the life at the base, and everywhere else, are gone. Even the small area on the one of the branches which had been green, is now black. 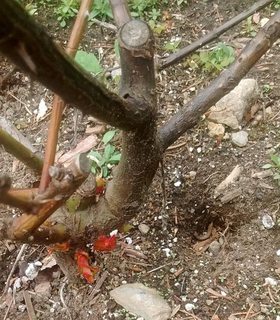 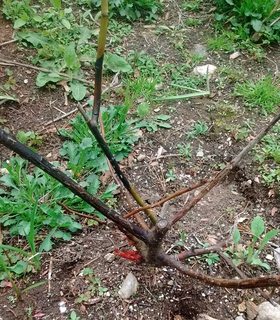 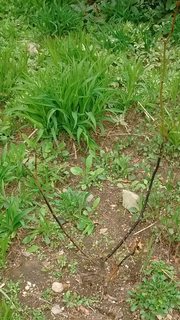 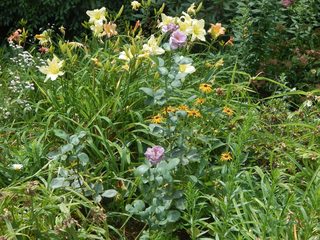 Good pics, but I can't see where the graft is - that's usually a lumpy area at the base of the stems, and although you have lots of old, dead stems arising from a central area, I'm not seeing what looks like a graft, and its usual for the graft to be below soil level or just showing above the soil. That means it's really hard to be sure whether this growth is coming off the rootstock (which you don't want) or is just new growth off the grafted rose.

You mention growth 'at the junctions' and it's not clear what you mean by that - a photo of that would be useful.

The way the photos look, I'd advise you to remove all dead growth,right back to where the new growth has appeared. Cut all the dead stems at an angle to allow rain to run off, angled away from where the new shoots have appeared if they're at the base of one of the dead branches, preferably using sharp loppers or sharp, clean secateurs if you have a pair which will cope with wood this thick. Fertilize, preferably with a specialist rose fertilizer, then wait and see what grows - it should become obvious if what's growing is actually off the rootstock and not the original grafted rose, and if that's what does grow, unless you want a wild dog rose, best to dig it out.

If the growth 'at the junctions' that is not shown in the pictures is higher up, then the grafted rose is not dead - cut back in the way described above to that growth, or where there is new growth showing. There is nothing to be gained by leaving dead wood on a rose bush, and its fine to remove it at any time of year, so long as you use clean and sharp tools to do it with.

In general, climbing and HT/floribunda bush roses are pruned in early spring, rambling roses should be pruned in September/October, depending what part of the world you're in.

Not the answer you're looking for? Browse other questions tagged pruning roses or ask your own question.

3
How should I care for a new Mimosa tree growing out of an old Mimosa stump?
5
How can I get more foliage and flowers on my rose?
4
Rose bush diseased or natural (new growth or rose rosette?)
6
How should I treat a weigela bush with a large section of dead branches?
4
Moving an old Rose bush
7
Does pruning a plum tree to maintain its size and shape prevent it from fruiting?
4
Is April too late to prune my fig tree?
5
Is the rapid new growth on this rose bush a sign of Rosette?
5
Pruning “Dead” Indeterminate Tomato Plant
2
Best way of pruning Cardinal Creeper