I have Basil and mint plants with leaves filled with white dots (see images), and now I've even noticed the same thing on a red currant bush. But I have no idea what's causing it. I can not see any pest on or under the leaves. The mint plant got some ants (just a handful) running around it, but I don't think that they are causing this. 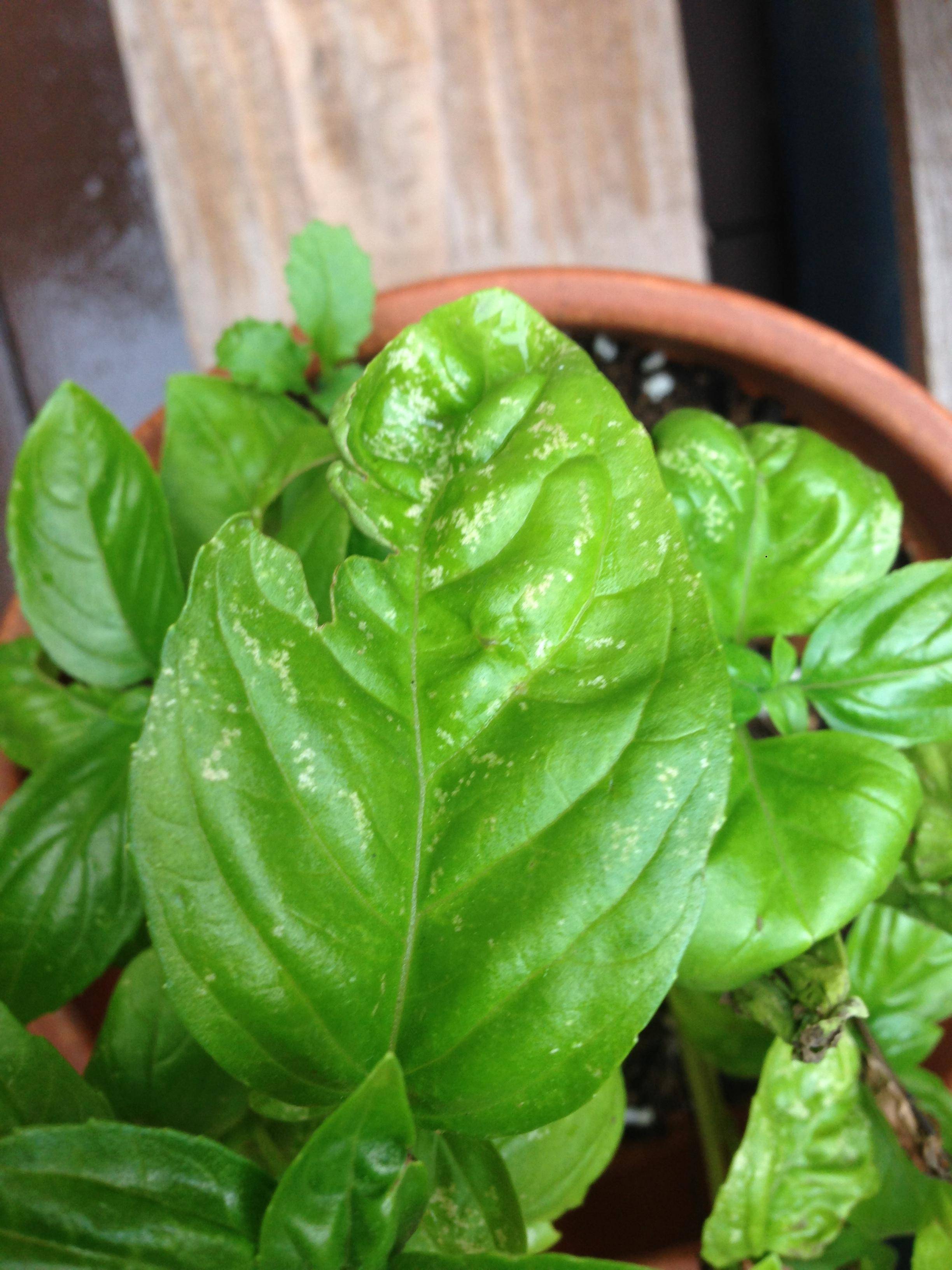 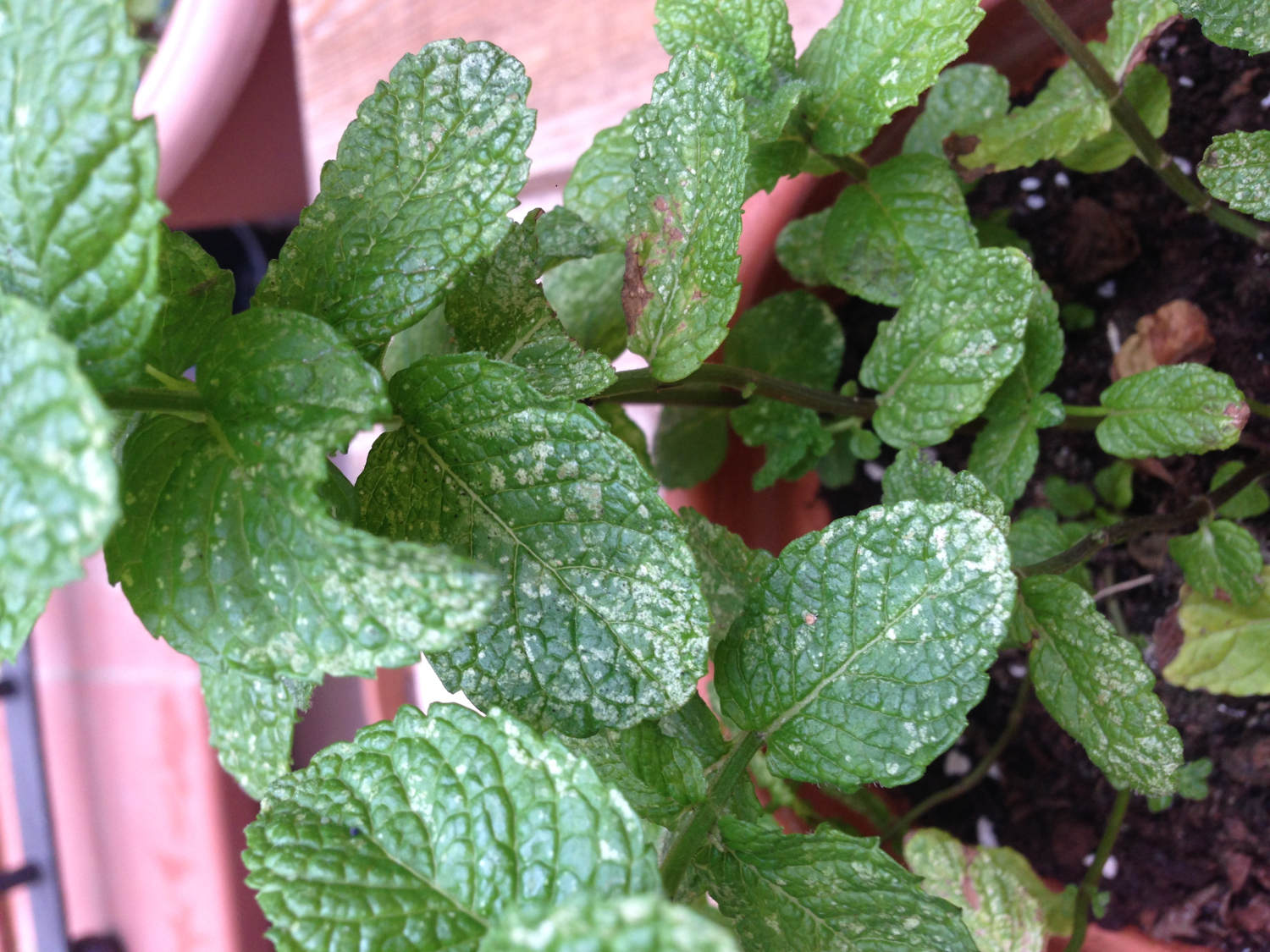 I tried, as suggested, to shake the leaves with a white paper under them, but no bug could be found on the paper (I did not use a magnifying glass, though. I used the zoom of my camera though, but nothing).

It is not only the surface, so salt residue it is not.

The plants where planted in fresh potting soil, though with the soil from the container it came in included. I have some hydroponic nutrient which I have been giving the plants every once in a while. So my hope was that there would be no deficiencies. The ph of the soil I do not know though.

Note: the bush on the other hand was planted in some super cheap soil, not the same as the herbs. So I would not be surprised if that one show signs of deficiency.

The way the leaves differ from the photo of the manganese deficiency is that in that photo the edges seem to be whitening all around. Whereas my plants only get spots (albeit more or less all over).

What makes me personally lean towards some type of pest is that some leaves have holes in them (So I am surprised that I am unable too see any. I might just have to buy a magnifying glass.). And I have another mint plant on the other side of the house which does not show any of these symptoms, and I treat them similarly (same soil, etc.). Though on that plant I found a bunch of mites close to the stem (but that's another story :p).

I don't really care too much if the mint and basil survives, or if I have to start over. But I would like to figure out what it is and how to treat it. Because I have a citrus tree in the same location which I care about. The citrus shows none of these symptoms btw.

I suspect red spider mite if worst on the underside of the leaf. The ants may be there because of the mites.

try holding a piece of white paper under the stem while the plant is dry and flicking it to see if any tiny red or black specks fall out. Put the paper on a smooth surface and press/stroke with finger and see if they smear. Mites are nearly microscopic.

If only on the surface of the leaves might be salts in tap water left behind after evaporation.

I think this is Manganese deficiency. What kind of soil are you using? It might be your soil's pH is too high so adding manganese wouldn't help. I'd repot in fresh potting soil from a bag. That pH would be just fine. If you haven't fertilized at all you could add a balanced fertilizer like Osmocote 14-14-14 after we've got a better diagnosis. Manganese is a micronutrient/microchemical that could be already in your soil but if you've got an alkaline soil outside (where do you live, are these plants in doors or out doors)? that you've used for soil it might be alkaline enough to not allow the plants to uptake manganese. You said your Ribes, or currant shrub which I am assuming is out of doors. Wait to add any fertilizer until we have a more firm diagnosis, OK? Ribes likes a slightly acid soil as well so that would follow.

Not the answer you're looking for? Browse other questions tagged pest-control pests basil pest-damage mint or ask your own question.

7
Identifying the type of mint
6
Disease / pest identification
4
What illness/pest has this rosemary and what to do with it?
7
What's eating my broccoli and kale, and what can I do to prevent it?
7
Sweet basil: Are dark green and slightly smaller leaves better?
4
Basil: Are these aphids, whiteflies or something else?
4
Sweet Basil-Pest Infestation