What is this plant? Is it a lavender, russian sage, or something else?

I had 4 plants near my front door. One of them died and I was trying to replace it. I bought a lavender from Home Depot and it was totally different as you can see (the small one in the middle of my larger ones (around 2 feet high 3 feet wide)). Can you help me identify what my plant is? What type? Where to buy it from? Any other suggestions (alternatives that will be about similar size and looks nice with mine)? Thank you in advance. I live in Phoenix (can get real hot) and this will receive the afternoon sun. 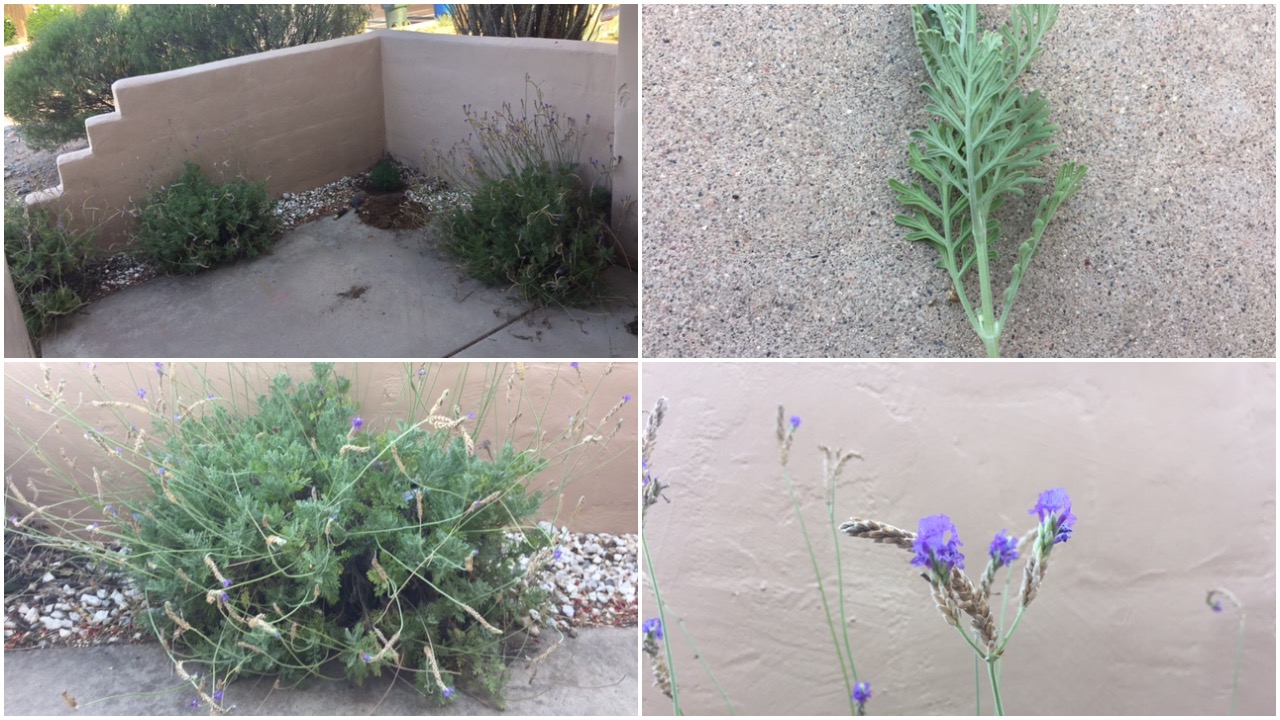 identification lavender
Share
Improve this question
edited May 10 '17 at 20:08

Looks to be some cultivar of Lavandula multifida, the fernleaf lavender. I could take a punt at a cultivar name and suggest 'Spanish Eyes' as it is probably the most common cultivar, but to be honest without it sitting in front of me, next to a known specimen of 'Spanish Eyes' I couldn't confirm that.

They are not the hardiest of species, but that shouldn't be too much of an issue in Phoenix, just makes sure that it never gets soggy feet. Like all lavenders, they like good drainage. Good pairings would be similar mediterranean species. In general, if a plant is growing well, then look to plants that would grow alongside it in the wild for other plants that are likely to be successful. I would suggest Rosmarinus officinalis if you need a bit of height (possibly in the corner). Other culinary herbs - Salvia, Origanum and Thymus might be nice. Phlomis sp. would look good. You could put some grasses in for contrast Stipa gigantea as alternative for the back and perhaps Nassella tenuissima for mid- to foreground planting. You don't want too many similar shrubs sitting next to each other or it's going to get a bit dull.

UPDATE: @stormy rightly mentioned in a comment that too many different types of plant will look chaotic. The list of plants above was to give a range of options that you may wish to choose one or two from - not all of them!

Given you want a quick fix, you could opt for another more readily available Lavandula. I would pick one that is sufficiently different not to look mismatched. If you pick another blue/pale lilac coloured one it look like you've tried to match it and failed. One with white flowers is probably your safest bet - Lavandula x intermedia 'Alba'. It will get a bit bigger than yours but should fill the gaps nice and quick. This is one of the more common white lavenders (or lavandins in this case) and also one of the tougher varieties - I'd be surprised if you couldn't find plants locally.

Artemesia 'Powis Castle'...these grey plants go with anything. I am not sure about the ID at all. Let's ID this guy for sure and I would buy more to make a soft informal edge in this spot. You could add a few Crocosmia, Lucifer or the yellow Crocosmia? Crocosmia pictures

Not the answer you're looking for? Browse other questions tagged identification lavender or ask your own question.

5
Are these lilacs/something else?
3
What is this tree seedling (White Oak, something else?) from Piedmont Region, MD?
1
What type of conifer is this?
3
Is this a type of jelly bean plant or something else?
4
What is killing my lavender?
3
What kind of houseplant is this? Long, narrow, variegated leaves
5
Is All this blackberry plant or is there more then 1 plant?
1
Is this a new lavender plant or a weed or an unknown plant?
1
What is this flowering shrub?