Is it time to repot my desk plant?

Here's the plant that sits on my desk: 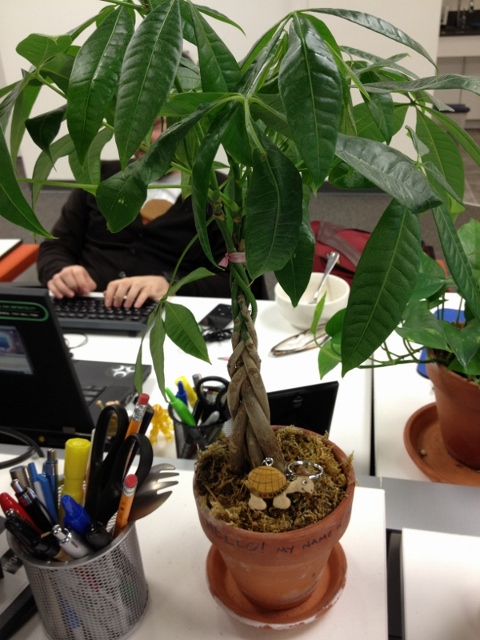 It is, I believe, a money tree. I've had it for about four months and seen some pretty substantial growth - 4-6 inches of overall height and many many new shoots (including that random one that points down for no reason).

Different plants act differently when they outgrow their pots. Some plants crack the pots, some pull in the soil, some just stop growing. This plant is healthy, but repotting would be a good idea.

Money trees naturally have plenty of soil to grow in, so putting it in a pot too large won't damage it. They should be repotted once a year. If the roots haven't reached the edges of the pot by the repotting time, shake away the loose soil, clean the pot, and repot it in its original pot with fresh potting soil. Fertilize once every other week with all purpose plant food.

If the roots are growing along the edges of the pot, repot it into a pot one size larger with the same care. Use all purpose potting soil, not potting mix. The soil mimics natural conditions better than potting mix, so it relieves stress. You can get rid of the moss if you want to. Moss keeps soil from splashing while being watered and spreads the moisture through the pot. It also helps keep the water in the soil.

In nature, you always find plant matter on top of the soil, excepting very poor soils. In good soil in nature, there is always either a layer of dead plant matter on the ground, or a carpet of growing plants. In a pot, the dead matter layer is more convenient, as it requires no care. The moss is the layer of organic matter in your pot. Getting rid of the moss shouldn't hurt the plant, as you will be replacing the soil every year. Taking it out or leaving it is your choice.

10
When is the best time of year to transplant established strawberries?
4
Why is my Japanese painted fern struggling?
5
Should I Repot a Tall and Spindly Jade Plant?
6
Why have my carrots turned purple?
8
How do I repot an avocado?
5
Time to plant new shrubs and plants in New England
3
Should I repot a newly purchased rubber plant
4
When should I repot a pony tail palm?