How/if to transplant a 15' Catalpa?

About 25 years ago three catalpa (Indian bean tree) seeds were planted in the Northern Hemisphere in a temperate climate. They came from the Southern Hemisphere and seem may have been from a Catalpa speciosa ("northern") rather than a Catalpa bignonioides ("southern").

Not really expected to grow, the three seeds were planted in close proximity. All thrived, so naturally one fared a lot better than the others, which were held back to different extents. About a decade ago the middle-sized one was transplanted as a 'stake' - about five feet of trunk, of diameter about 3½". About five years ago the smallest was transplanted as a whole tree about 7' tall. Both have thrived since. 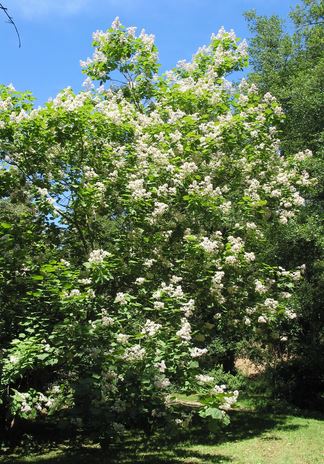 The middle-sized one is now about 15' tall and is no longer suited to its location. When I was contemplating cutting it down a neighbour happened to mention he was intending to buy an established tree. He is amenable to a catalpa but without a mechanical aid (out of the question) the 15' tree can't be moved intact. Investigating other possibilities I have seen mention of root pruning. However this has been described as passé in the context of catalpas and the data from a controlled experiment (by the RHS, on beech trees planted 2005-2008) is "yet to be analysed".

The trunk of the 15' tree is around 4-4½" so a root ball extending out to five times the trunk diameter is not practical here, though something like three times might be (for a root ball around 2' across).

Given success with the "stake" I am also contemplating top pruning back to about 10' and anything spreading more than about 3' – which would mean cutting off almost all the branches.

Worse, a time constraint means I cannot wait until Autumn and may have to attempt any surgery and transplanting just at the start of the growing season. I think the chances of success as slim (perhaps so slight even the attempt is not worth the bother) but should I "give it a go" anyway—and what can I do to improve the odds of success, if only by a small measure?

There is a vaguely similar question here: How to transplant this oak tree? but the tree is a different genus and about twice the height.

Transplantation, if it happens, has been put on hold since the prospective new location was not suitable.

I don't know about Southern Catalpas, but Northern Catalpas are hardy trees. I cut one down that was about 15', and it grew back a number of times that year (I removed the shoots whenever they started to grow again). They grow from seed like weeds in my yard, too. Their wood is pretty light and easy to saw.

I don't have experience transplanting trees so large as 15', and I can't tell you for sure if it will work, but my personal opinion is that if you can dig it up, you should be able to have success. But, no guarantees.

To improve the odds of success, I recommend the following:

I don't normally recommend transplanting large trees, though. It may impact the tree without killing it. Northern Catalpas grow pretty easily from seed, if you'd like to grow another one. I could probably send you some overwintered Northern Catalpa seeds if you need some. I don't know if they need a cold period, but they've had one.

I wouldn't recommend doing this, how ever if you do, water several days before you do any digging around the roots allow time for the tree to fully hydrate before potential damage occurs during procedure. Allow your self at least several hours to do this, cut with a spade a circle as large as the canopy itself, look up for a guide and go done about 2 spits depth, slowly make the circular trench smaller until you hit small fibrous white roots. Now dig a ramp away from the circle at a gradient of no less than 1 in 5 and place a piece of plastic sheeting on the ramp- to allow you to transport the root ball in one piece and also make sure the material is a very large strong type of plastic sheeting- you can also use it to tie up the roof ball and stop it from drying out (leave over night). Now try to under cut the tree it self freeing it from the hole itself then slide the plastic sheet as best as you can under the root ball and try not to destroy the root ball. Dig the hole you need and drag the tree/sheet over and pop it in. If anything the sheet should stop any mess. The main thing with a large tree as this is to try to make the root ball as complete as possible and not to destroy it- I know this is a lot to ask, depends on how fit you are? Next stake it by placing a stake at 45°, careful not to go through the root ball itself and make sure the stake is long enough to touch the main trunk of the tree, tie it up with a recommended tree tie bought from a shop and remember to tie the tree to the stake not the other way around- that way in a years time one can loosen the tie and allow the tree to grow with out damaging the bark. Oh and remember to water it a lot afterwards- think gallons not litres!

Not the answer you're looking for? Browse other questions tagged trees pruning transplanting root-pruning or ask your own question.

3
How can I transplant this large oak tree?

6
How should I stabilize a tree with a malformed root ball?
7
Camellia losing its leaves
6
How do we revive Spruce trees that lost 50% of their needles after a flood?
4
How to prune a fiddle leaf fig tree
3
Should I remove the top of a tall, skinny eucalyptus to promote a stronger core?
7
How to encourage new branch growth in a peach tree?
4
Is this a Jacaranda or a Silk Tree or something else?
6
How should I prune my persimmon tree that has a lot of thin branches growing upward?
4
Why would the trunk of a tree start to flop over?