Impatiens glandulifera Himalayan balsam is considered a nuisance by some (eg a "prohibited noxious weed" under the Alberta Weed Control Act 2010) but it is colourful and the explosive pods are quite fun, ejecting seeds up to 7 metres (23 feet)† . Wikipedia mentions:

ordinary people could buy them for the cost of a packet of seeds to rival the expensive orchids grown in the greenhouses of the rich.

A specimen was introduced half a century ago to a river bank in a temperate climate where it established itself quite thoroughly in a few years, thrived for about a decade, grew rampant for a decade or so and then disappeared quite abruptly, a decade or two back. 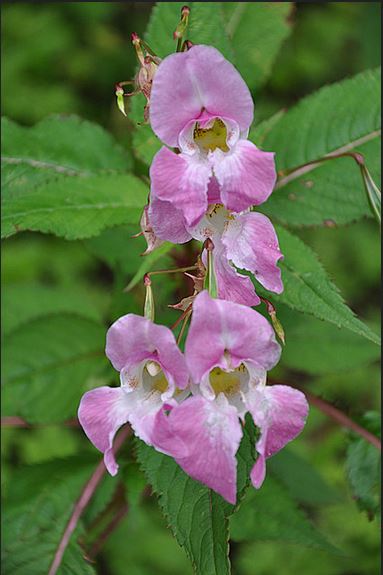 During its most prolific spell it was also rampant a few miles downstream but disappeared from there at about the same time. While there may have been attempts to eradicate it downstream no such efforts were made in the location where it was introduced.

I gather flooding is likely to kill it off, though I happen to doubt that was the 'solution' even downstream (The seedbank lasts for approximately 18 months, so two years’ control should eradicate the plant) because I don't recall floods in successive years. It was certainly not the case upstream, where weirs control the water level.

Decrease in eutrophication/hypertrophication has been suggested as a possible control mechanism (ie, reduce nutrients to give local, adapted vegetation a better chance to compete). It seems a possible cause of the demise, as the stream flows through agricultural land and there had been some sewage leakage into it around the time of the rampant phase. However I am not aware of water quality tests from that time and the water is too well churned and aerated to show telltale signs of phytoplankton.

There is also 'the usual suspect', global warming. With its origin in the Himalayas perhaps the climate has warmed enough in half a century that temperatures no longer suit the plant. I doubt this however as the climate in Cornwall for example is likely warmer and growth there has been vigorous.

The Centre for Agriculture and Biosciences International has released rust fungus in some areas, to control "policeman's helmet". I don't know how to detect whether that is present but have not noticed any indication.

I am not planning to reintroduce a specimen but am wondering what happened. Are there possibilities I have not considered (maybe a couple of successive very cold winters?) or does any one of those I have mentioned seem the most plausible culprit?

† May be seen doing so on Wikipedia.

It is difficult to tell, and we risk to put opinions instead of facts in our answers.

An abrupt total disappearance does not seem very probable, especially for an invasive species), so if it is really so (and not just some delay because of climate), I would say it wasn't really caused by a "natural" cause (weather, disease).

For me there could be two causes:

I would also not exclude that some "volunteers" removed them. From time to time you find such people, with brute force approach (but it is not effective if it is not done at large scale and removing root cause, so convincing people to remove the same plants in gardens).

Climate could be a reason, but it will not be so quick: you will find it less strong, and maybe only on the cooler places near the river. On the other hand, in my region we don't have it, but an other invasive Himalayan Impatiens: I. balfourii (which seems to have warmer preferences as I. glandulifera).

Not the answer you're looking for? Browse other questions tagged diagnosis weed-control growth annuals or ask your own question.

9
Why won't my mulberry tree set fruit?
3
Why did the leaves on my Christmas cactus suddenly change texture and colour?
5
Help needed to keep away weeds coming from a creek
3
Is it possible to save a lawn completely overrun with weeds? If so, how?
4
Diagnose Sugar Maple problem
11
What kind of grass is this, and how can I keep it out of my garden
4
Diagnosis - sick blueberry plant
4
Looking for input as to next steps for my lawn issue
1
What is the best way to de-weed a lawn?