Why is this boxwood suffering? Is it box blight or an insect-infection?

I have two small boxwood hedges in my garden which I have trained over the years by cutting into the form of a cuboid. One hedge is in a shady and wet place, one is fully exposed to the sun, south oriented.

They are two different kind of boxwoods, of which I don't know the species. One, I'd say, is the classical one, round leaf variety, one has slightly triangular leaves. Both show the same symptoms.

Last year, I don't know why, I cut the hedges in October only. Even though I'm aware that it should be done in late/middle-summer. I think I thought, what the heck.

Right after cutting I noticed that the some leaves started getting (or already had been gotten) dry and became white-greyish. I thought, ok it was too late, but it won't kill them, they will recover.

At the same time people in the village reported a box-infection of some kind of insect (I forget the name).

Then winter came, we had colds going down to -5 °C and I thought if it is insects, they are dead now.

Now in spring I'm fearing the worst, 50% of the hedges show grey leaves, there is barely new growth.

Today I noticed that there some kind of webs inside (might be normal) and some crumbs, which could be sediments of something, or simply birch pollen. (There are birches nearby).

Here are some pictures I took. I'd like to know what it is and if there is anything I can to do prevent further damage. 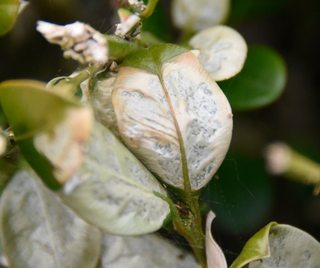 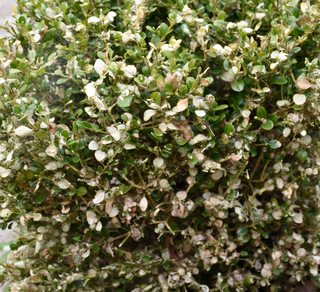 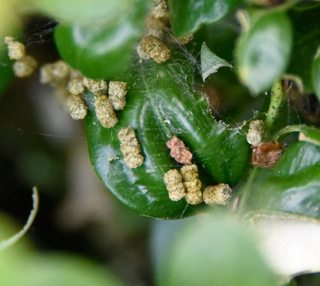 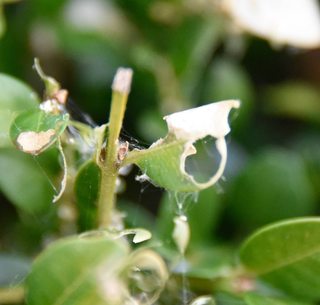 If there's webbing amongst the leaves, my money's on box tree caterpillar, although its odd you've not actually noticed the caterpillars themselves yet. Of all the problems Box gets (and its an ever increasing list) the only one that goes with webbing is the caterpillar. The caterpillar is the larval stage of a moth and was first found in mainland Europe in 2007, so it's been around for a while, not quite so long in the UK as over there. Eggs are often present under the leaves if the caterpillars are not hatched yet, so check beneath.

This link lists various problems from which Box suffers - you can click on each one for more information to see for yourself what you think.If it is Box caterpillar, picking them off by hand is useful, but spraying may be required. Note the spray has to be pretty forceful in order to penetrate the webbing. Pesticide products recommended in the link may not be available under the same names where you are, but there should be products using the same active ingredients.

Not sure what those deposits are on the leaves in the bottom left picture, but I do know that other evidence of Box Tree Caterpillar/Moth is frass deposits and residues of moult such as 'black head capsules of different sizes'. Sounds charming - got that from this link here: Plantwise Knowledge Bank which has information that may be more pertinent to mainland Europe.

After Bamboo's answer I checked again and collected around 20 caterpillars just on one plant (50x50cm) and I'm sure I missed some of them. 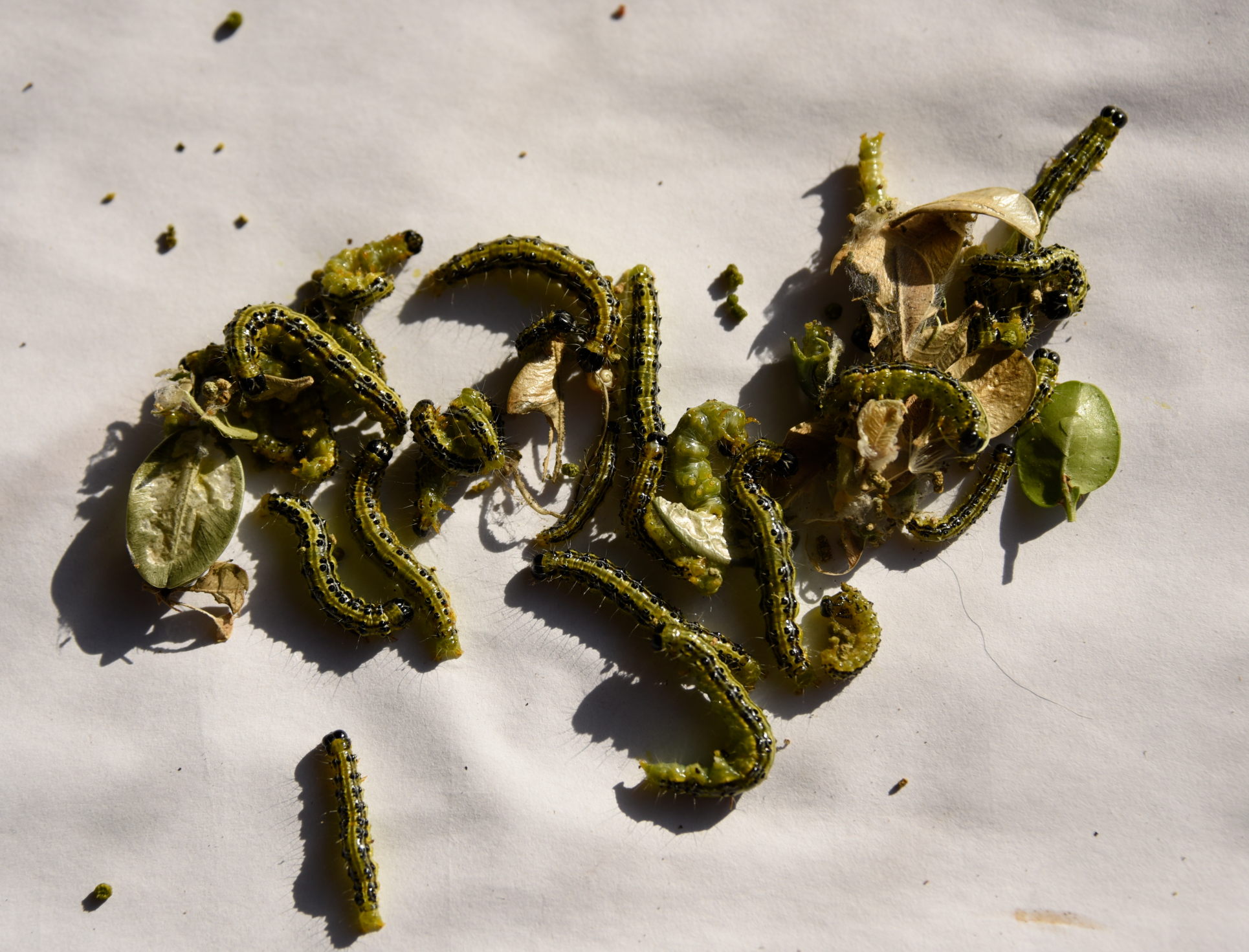 I checked again for the alert I received from a fellow gardener of the village last year, and it is exactly what I found on mine: Pyrales du buis: Cydalima perspectalis, the box tree moth.

I will try the treatment based on the bacillius thuringiensis.

4
Is there anything that really helps against the Box tree caterpillar once they are spreading?
6
Box tree turns bright yellow

2
Box-blight or just the effects of winter
3
Is this a sign of some disease or insect damage? (Piel De Sapo plant)
3
Why are my boxwood shrubs dropping yellow leaves?
7
What's eating my broccoli and kale, and what can I do to prevent it?
3
Help identifying pest
5
What is this big caterpillar in my yard?
2
What is eating/removing young fruit from my lemon and orange trees?