How to maintain these plant roots close to the ground?

I removed lots of things at one spot in my garden but one residue is this bunch of cable-looking roots: 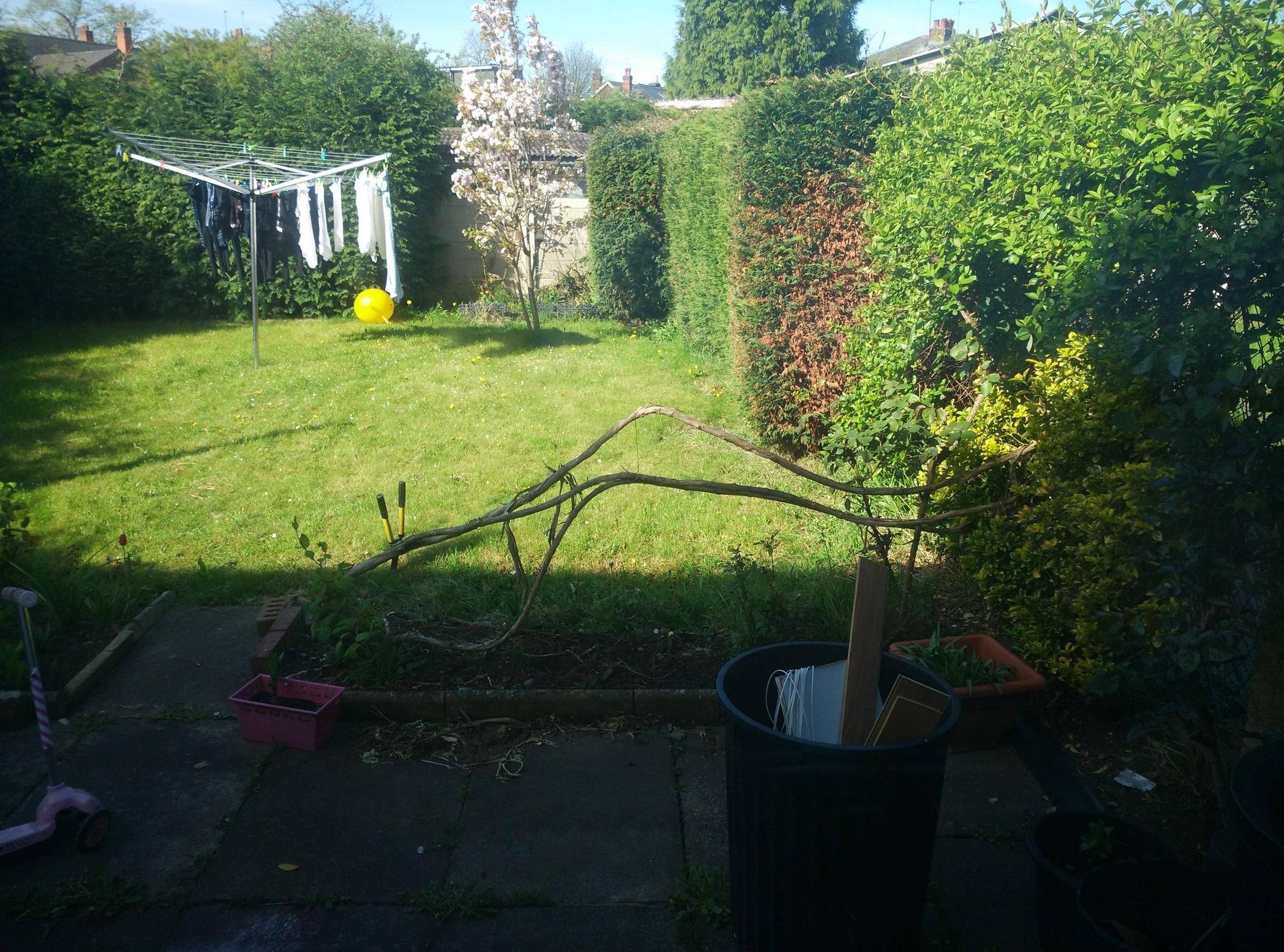 I want to keep them because they belong to a plant (located on the far right of the image) that provides privacy between my neighbor's garden and mine.

Problem is these roots look weird so I'd like to "push" them down to the ground. I was thinking of some U-shaped piece of metal planted in the ground but the upward pressure of the roots would probably push that thing out of the ground.

Instead of pushing them down, you could build a fence of some kind that you can train it along. If they're vines (as opposed to roots), then you may even be able to encourage them to grow shoots along the fence. If it was a wisteria, jasmine or honeysuckle kind of plant (i.e. with some decorative value) then it might be worth considering.

Are you sure that is a root belonging to something you want to keep? It looks to me a lot like a large honeysuckle vine. It's going straight through that Euonymous shrub, but it definitely doesn't belong to it! This may be a volunteer vine that you thought was a root of one of the hedge shrubs. It seems unlikely that this vine was intentionally planted (no offense if you planted it) because of it's really weird location.

This is a bit of an odd idea: you wish to keep the plant as it is but you'll like the roots to be closer to the fence, but it's ok. Strange idea: dig up the plant with a large root ball no smaller than a football sized lump of soil and plant next to the fence as such because the bigger the rootball the better the plant will be. However, you mustn't damage the stems or over bend them as if they brake- then game over.

It does seem to be an odd place to plant a climbing plant so far away from a fence, isn't it? The only idea I can come up with is to just water a couple of days before you do it and allow to dry out a bit before you attempt it- a plastic sheet placed next to it as you move it will lessen the mess and hold the ball together better. However you might have to go quite deep to get the main root out whole- think maybe 2-3 feet deep- quite an undertaking but possible. Burying the stems will only rot the plant as they are not roots (those stems will not layer as they are too big and old).

If you think you're not quite up to the task, perhaps camouflaging the stems with some other plants might be an idea. Use something that would be evergreen and about a foot off the ground so one could hide those stems in plain sight or perhaps use the stems for something else to climb up and over into the fence too- like an annual flowering thing (sweet peas?). However you might have to put up a support for both- an arch or trellis with a hole in the middle to allow a view down the garden.

Not the answer you're looking for? Browse other questions tagged roots hedge or ask your own question.

14
How do I prune the roots of a rootbound plant?
4
Will removing the above-ground roots of an oak tree compromise its safety?
6
How should I remove long grasses/roots to prepare a fresh bed?
6
Roots growing out the top of plant, last attempt?
1
Are these Ficus air layered roots ready to plant
3
Pinus pinea close to the house
1
What are these tuberous roots?
2
Are these white things roots?
2
Cedar tree roots close to house
1
How to kill off bramble roots?