Is it safe to change the soil completely for mint? And is it bad for the plants that the roots are sticking out?

Change of Soil + Roots: I recently took a gardener's mint plant back home alongside some of its soil in a quite small flower pot. I didn't know that mints grow and spreads VERY fast and it's starting to take over the whole pot and some of its roots are sticking out, and I wonder would that affect its growth. Back to subject. I'm deciding whether I should buy a new and bigger pot and buy the soil from supermarket because the soil that I have brought back is not enough for a larger pot.

Oh no I think I'm killing my plant. There are around 10 mint plant growing on the same root but the largest one seem to be dying. The leaves are getting very black and die quickly. Others are fine though. I'm trying to add banana peels in case its lack of potassium but its not quite working. I think I should just cut the whole plant off 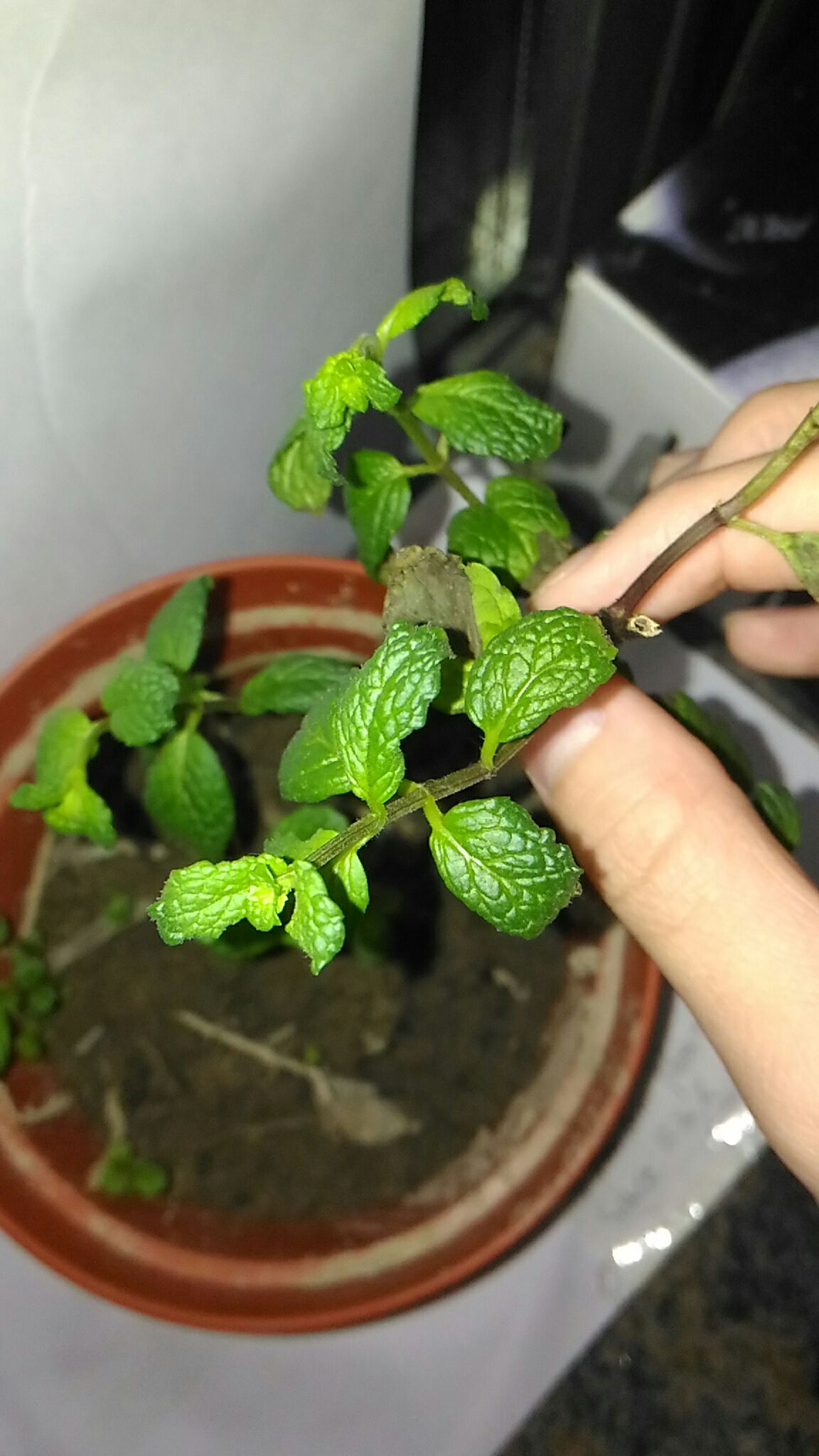 As you have probably discovered by now, mint is pretty sturdy. If you want to keep it in a pot, potting soil is absolutely fine, much better than garden soil.

So yes, go ahead and transplant it into a larger pot. But do not make the mistake of going from a very tiny pot to a very large one. To some degree, your mint will "grow into" it, but like you wouldn't buy shoes five sizes too large for your child to "grow into", the new pot should only be a bit larger than needed - two inches, perhaps.

If your mint keeps growing, you can at some point divide it instead of using larger pots. Either discard part of the plant or pot them up separately.

Mint is a real beast and will survive inspite of anything you do except over watering.

Mint seems to be "all or nothing" (somewhat like Marmite's "You either love it or you hate it"). Usually "all" (too much growth), though a few people have had no success with it. Last week I had more than a square metre of it removed from where it had escaped its pot (planted outside). It was rampant but had never received any special attention (no fertiliser, no watering whatever the weather, except some of the spray intended for the nearby vegetables in times of drought).

Mint roots are not aerial and should be spreading out to seek nutrients and moisture for the plant and for mint that means underground. They do grow very shallow but actually on the surface seems odd and it could be that those attempting to grow underground have rotted. You might find the entire plant comes away from its compost with just a gentle tug.

As ElizabethB said "The only way you can kill mint is to love it to death." So I suggest a dose of neglect. Don't water it again for at least a week and if it then perks up a little still hold off watering until it starts to show signs of thirst. Then start a watering regimen at a slight greater frequency. Do prefer rain water, or if tap water at least let that stand overnight before adding it.

As a back up I suggest taking a cutting (eg) even if shorter than the 8cm recommended there and, in due course, use potting compost rather than garden soil.

But to answer your questions (!):

Is it safe to change the soil completely for mint?

Yes. In a pot potting compost would be better than garden soil.

And is it bad for the plants that the roots are sticking out?

No, but in my opinion a sign that something is not right.

You will be hard pressed to kill a mint plant. I wouldn't worry about the exposed roots. If you want to start a new pot of mint, you don't even need to transplant the entire plant. You can just take some cuttings of the root rhizomes that spread through the soil horizontally, stick them a few inches under the new soil in the new pot, with no foliage or anything and it will grow within a few weeks. Basically, yes, you can repot it and change all the soil if you desire. =]

Not the answer you're looking for? Browse other questions tagged soil roots mint or ask your own question.

12
Is it safe to change the entire soil surrounding the roots?
5
Is it a problem that the stems of my mint cuttings are curling?
8
Identifying types of mints in my garden
2
Why are the leaves on my mint plant drying up and brown bumps are forming on the stems?
3
What variety is my mint plant/why does my tea taste grassy?
5
Tiny white spots appearing on mint leaf
5
Succulent spreading outward, Exposed roots
3
Bought this mint pot from Jewel osco 3 days ago. Browning on leaves and stem now
2
Removing Bushes and ground cover weeds. Do I completely change the soil?
1
How much sunlight do these rooted mint saplings need?