What is this variegated low-growing plant with purple flowers, and how do I get rid of it?

I'm not even sure this is considered a weed, but it seems to be taking over a flower bed, so, I'll treat it as one. On my neighbors' front garden, it completely took over. 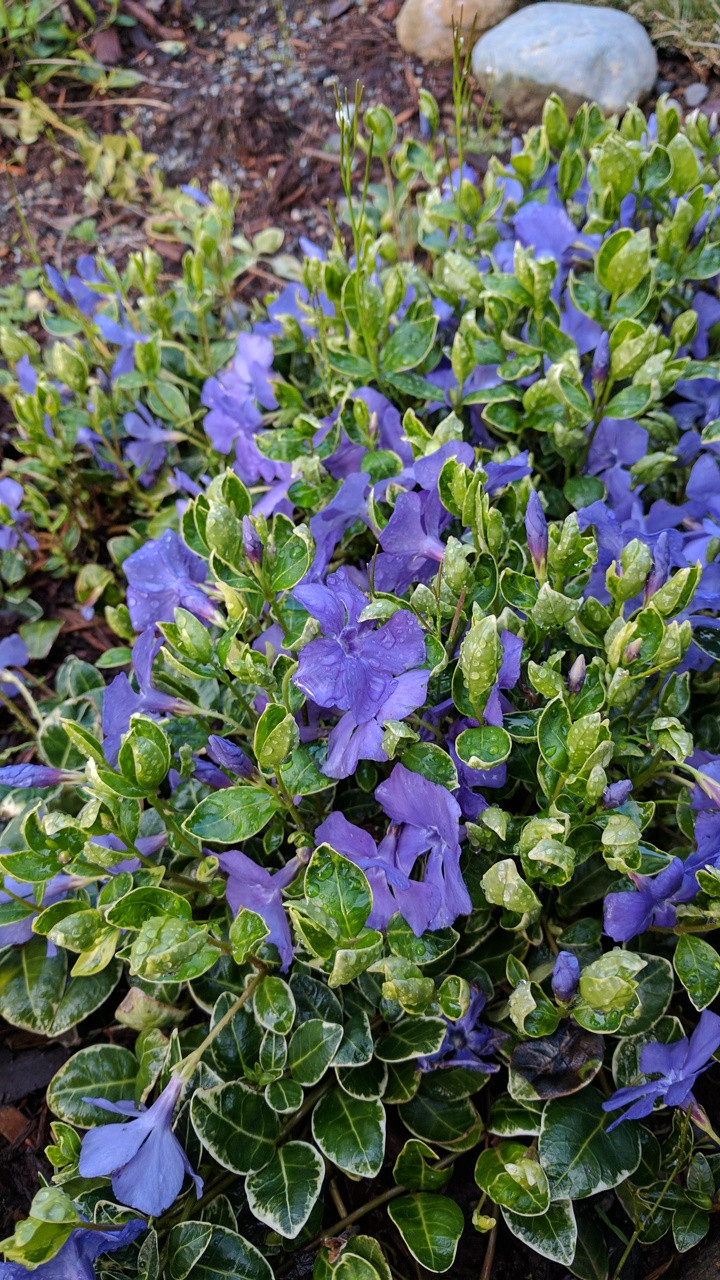 The ground is somewhat humid due to constant rain (US Pacific Northwest), and the plant grows low to the ground, and has some beautiful purple flowers. Its roots are somewhat deep, and I either need a tool or some digging to remove all the roots from the bigger plants.

It seems like a Vinca minor (periwinkle). It can be rather invasive, and does favor humid places.

Control of Periwinkle with Herbicides

Several states classify periwinkle as an invasive weed. For periwinkle weed control in large areas where digging is not practical, use an oil based herbicide. The cuticle on the leaves repels water based applications, but the oil base will allow the chemicals to adhere to the leave and gradually travel into the vascular system of the plant.

Triclopyr mixed with mineral oil is effective but applications will need to be repeated as straggler plants crop up. Getting rid of periwinkle generally takes several seasons no matter what method you choose because of its hardiness and tenacity. Spray in winter when all other nearby vegetation has died back.

Alright, it sounds like a pain in the-you-know-what, but manual removal really works best. Dig deep into the soil, starting at the edge of the problem area. Remember that periwinkle weed control relies upon complete removal of those roots, which may be several feet into the soil.

Make a two-foot trench around the area and loosen the first section of roots. Pull as you dig further into the bed, loosening the soil as you go. The next season, if you see any small plants forming, immediately dig them out. In this way you will be rid of the ground cover permanently in a couple of years and other plants can take over the area. It won’t be easy, but it is a non-toxic removal that is effective.