Are there any varieties of Elephant Ear that are hardy enough to withstand a zone 6b winter?

When I look at Elephant Ear varieties in plant catalogs, they all say Elephant Ears are hardy in zones 9-10, sometimes 7-10. But I see people in my area, zone 6b, growing them outdoors without winter protection. Are they growing special varieties or are most catalogs being overly safe?

You're on the cusp of being able to overwinter some varieties of Elephant Ear, Colocasia. I found what you did, that of the very cold hardy varieties, zone 7 is pretty much the lowest advertised.

However, there is one variety that keeps coming up as being hardy enough for you. As Tim said, it's the Colocasia 'Pink China'. A number of nursery catalogs and anecdotal articles recommend it as the one to try in zone 6. I even found a few that have grown it successfully in zone 5.

Here's a sampling from my research. Some are redundant, and are listed just to give examples.

Cool Colocasias, Elephant Ears for the Garden, from Plant Delights Nursery in Raleigh, North Carolina, is a great resource for care of Colocasias in general, and features a comprehensive list of different varieties with pictures.

Colocasia esculenta 'Pink China' is an introduction from Kentucky's Brian Williams, and has been the hardiest elephant ear in his trials, with tubers left on top of the ground surviving outdoors in Kentucky. We have heard unverified reports of hardiness in warmer Zone 5, but we'll believe it when we see temperature documentation. Regardless of the hardiness, Colocasia 'Pink China' makes an attractive 4' tall clump that spreads rapidly by rhizomes to create a large patch. The green leaves are held atop mauvy-pink stems. (Hardiness Zone 6-10)

Colosiaplants.com is also a good general resource. From the detailed section on overwintering:

Most Colocasia has a solid USDA Hardiness Zone 7b, while Colocasia 'Pink China' is reportedly winter hardy to Zone 6.

A very pretty variety with vibrant pink stems, it grows to 4-6 feet. It is a fairly cold-hardy variety to Zone 6 (we are Zone 5 in most cases).

This elephant ear is reportedly as hardy as Musa Basjoo (the Japaneses Fiber Bannana) and it looks great planted under the banana tree. The plant has medium green leaves, but it is easily identified by the pink dot in the center of the leaves. The stems also are very pink in color at times, but not quite so bold at other times. The tubers spread like crazy and one plant may easily turn into 25 in one summer.

This is a must have for anyone trying to grow tropicals in cold zones. It has easily survived several Zone 5 winters here with no protection, although the survivors don't tend to get quite as big as the ones overwintered in a garage, which can achieve 5 to 7 feet in height. This elephant ear really multiplies in the sun, but it will do just fine in part shade and actually have better color.

Elephant Ear ‘Pink China’ (Colocasia hybrid) has brilliant pink stems and rich green leaves with a pink dot in the center to add vibrant color to any container or garden. Possibly the hardiest of all colocasias, 'Pink China' can tolerate zone 6 with a heavy layer of mulch as winter protection. It makes the perfect tropical plant for people in colder zones who don't want to move plants inside for the winter. 'Pink China' generally reaches 4' tall the first season and it spreads by underground rhizomes creating a larger display with each subsequent year.

Elephant Ears Colocasia Esculenta "Pink China" is known to be the hardiest Elephant Ear variety. With proper mulching, it can even thrive in zone 6. Pink China has dusty green leaves and gorgeous shocking bright pink stems. The pinkish purple hues extend to the under side of some leaves.

Although I'm on the East Coast of the United States, I live in pretty much the same zone as you, and we sometimes have unusually mild winters. I imagine you do too, so if you're willing to take a risk, I'd try this lovely looking variety. If you start to see too many dying off, you can dig up some of the tubers (rhizomes) and move them inside the garage or house (if the plant's not too big) for the winter. According to most of what I've read, transplanting is not too difficult, especially among the smaller varieties. 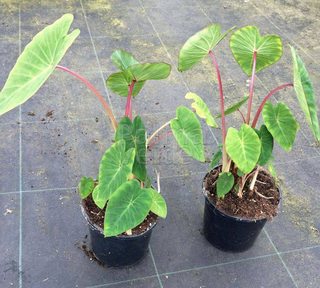 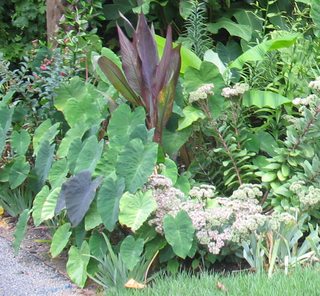 The Pink China Elephant Ear is supposed to be hardy to zone 6. I have not grown it myself though.

Not the answer you're looking for? Browse other questions tagged overwintering variety-selection tropical hardiness-zone or ask your own question.

9
Are 'winter' varieties important when sowing beans & peas in late autumn/fall?
10
Glass vs plastic greenhouse covering: pros and cons
5
Are there climbing vines that don't damage stucco?
6
Auckland Rural Zone and Confusion about Frost Protection
2
What bamboos are hardy in USDA zone 4A and can be used to make cloth?
4
Are there mulling spices that can be grown in zone 5 northern USA?
1
Are these elephant ear bulbs worth planting
2
What Disease is on my Mango Plant? Are there any remedies to cure it?