What is wrong with my trees? The bark on one side is cracking, splitting, and peeling off

I had 5 trees in the strip between my sidewalk and the street.

Last year the bark on one of them started to peel (and was exasperated by some kids physically peeling it off). In the fall, it snapped and fell over about 2 feet above the ground during a wind storm.

Now the other four are also peeling.

The odd thing is that for all of them it's only happening on the west facing side (that faces the street). The east side seems perfectly fine.

I believe they are all some sort of maple trees. This doesn't seem to be healthy at all. Is there a way to save these trees? Any idea what might be causing this?

Trees are located in Utah, Zone 7a. 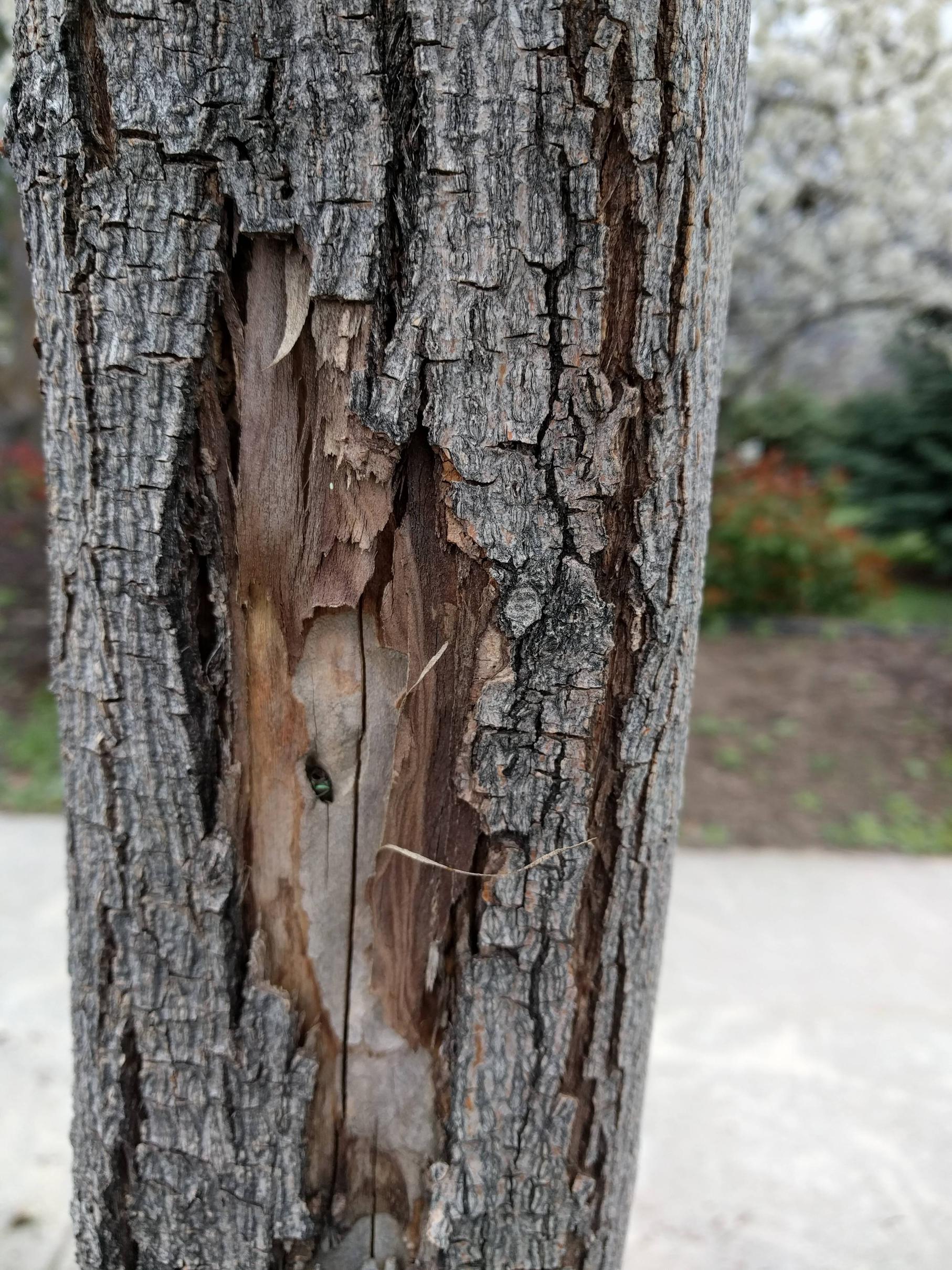 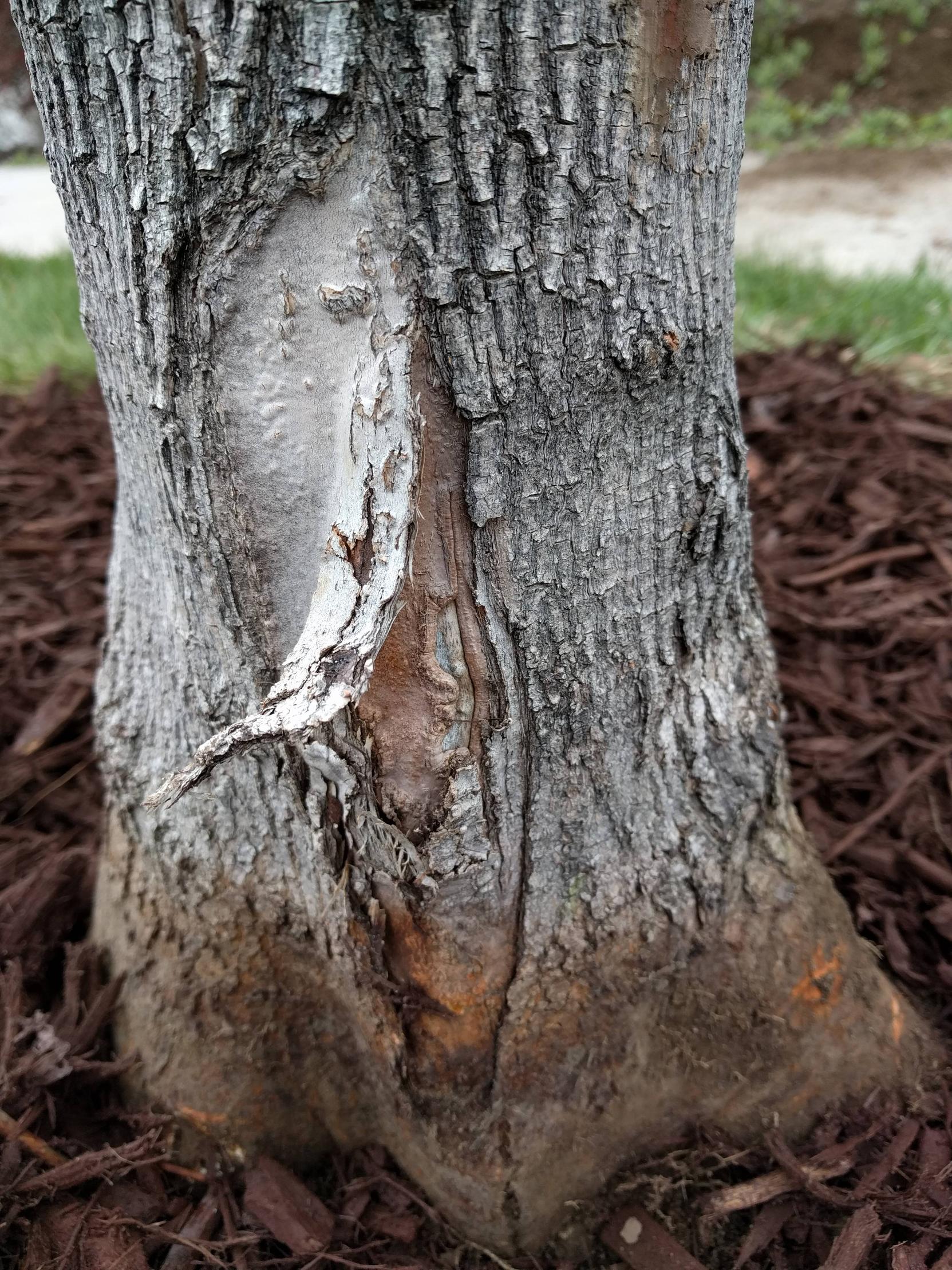 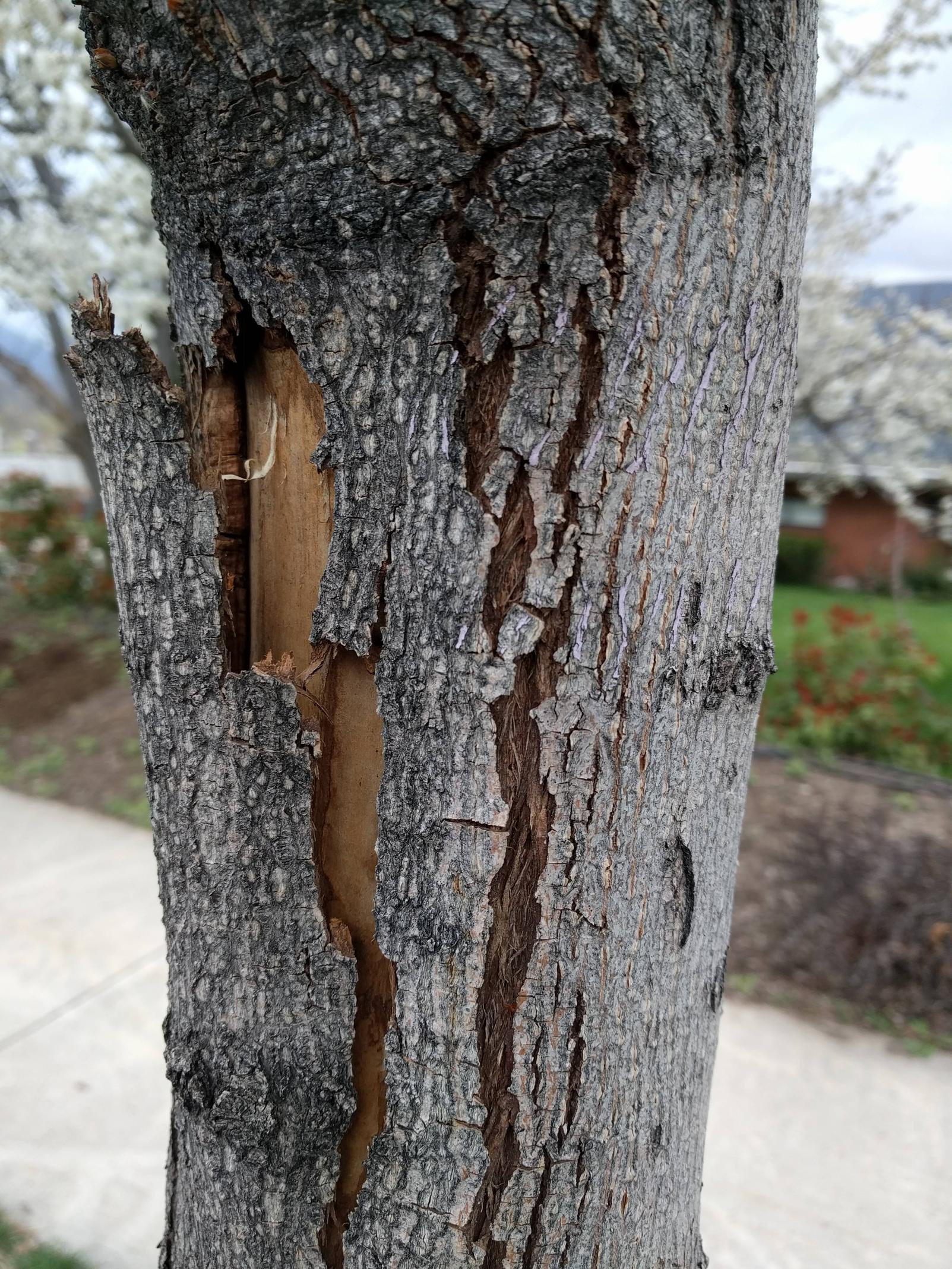 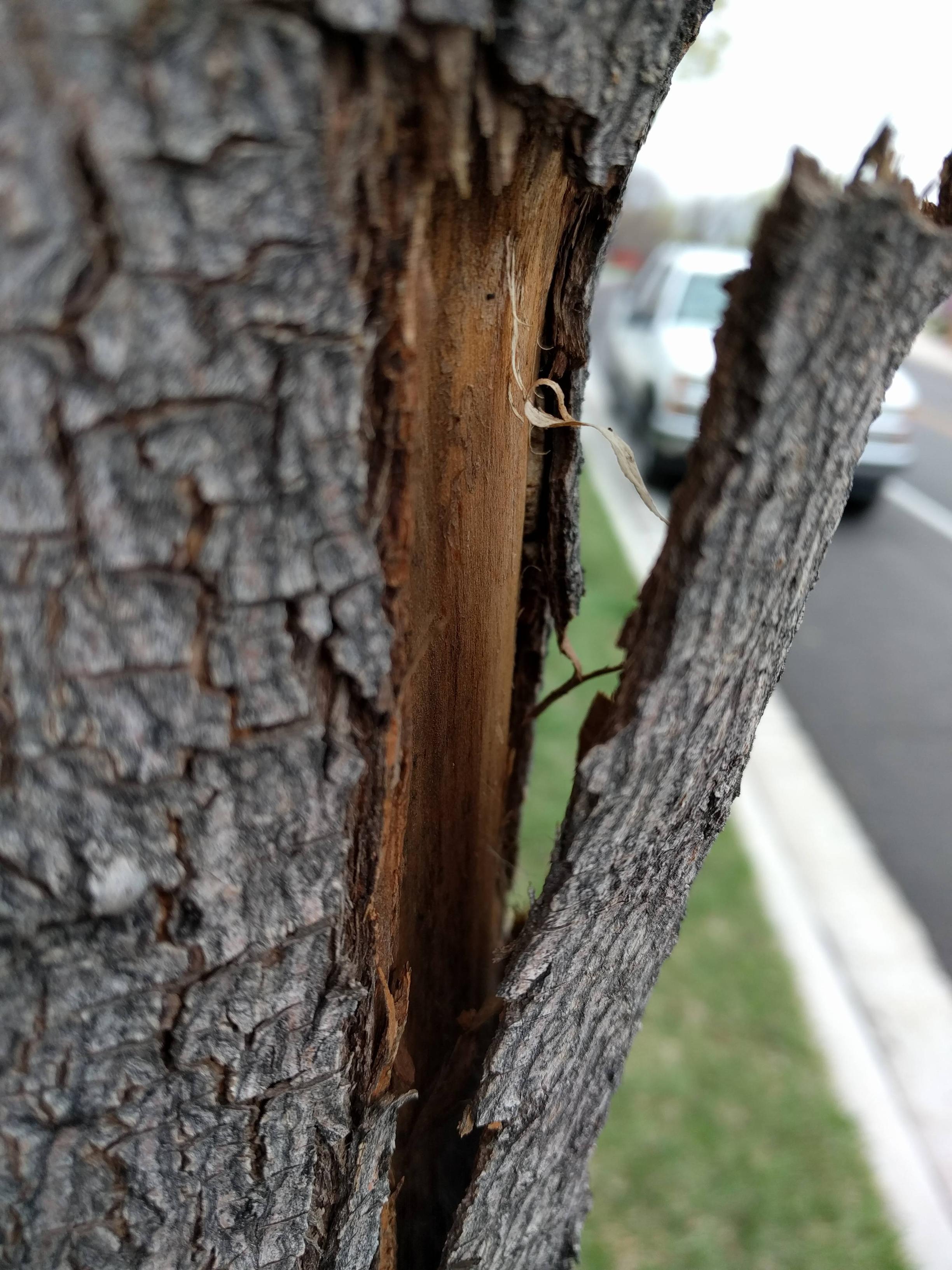 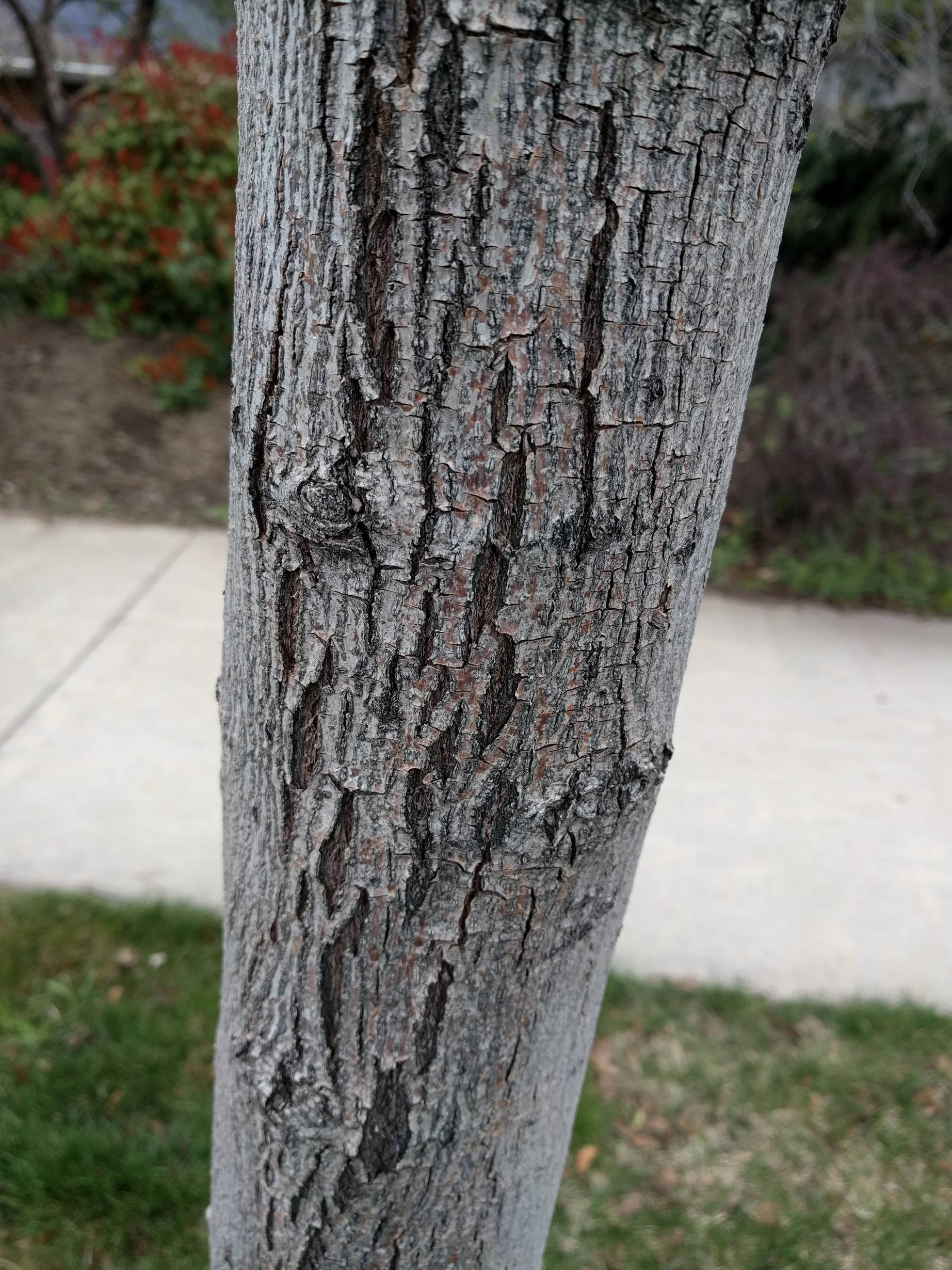 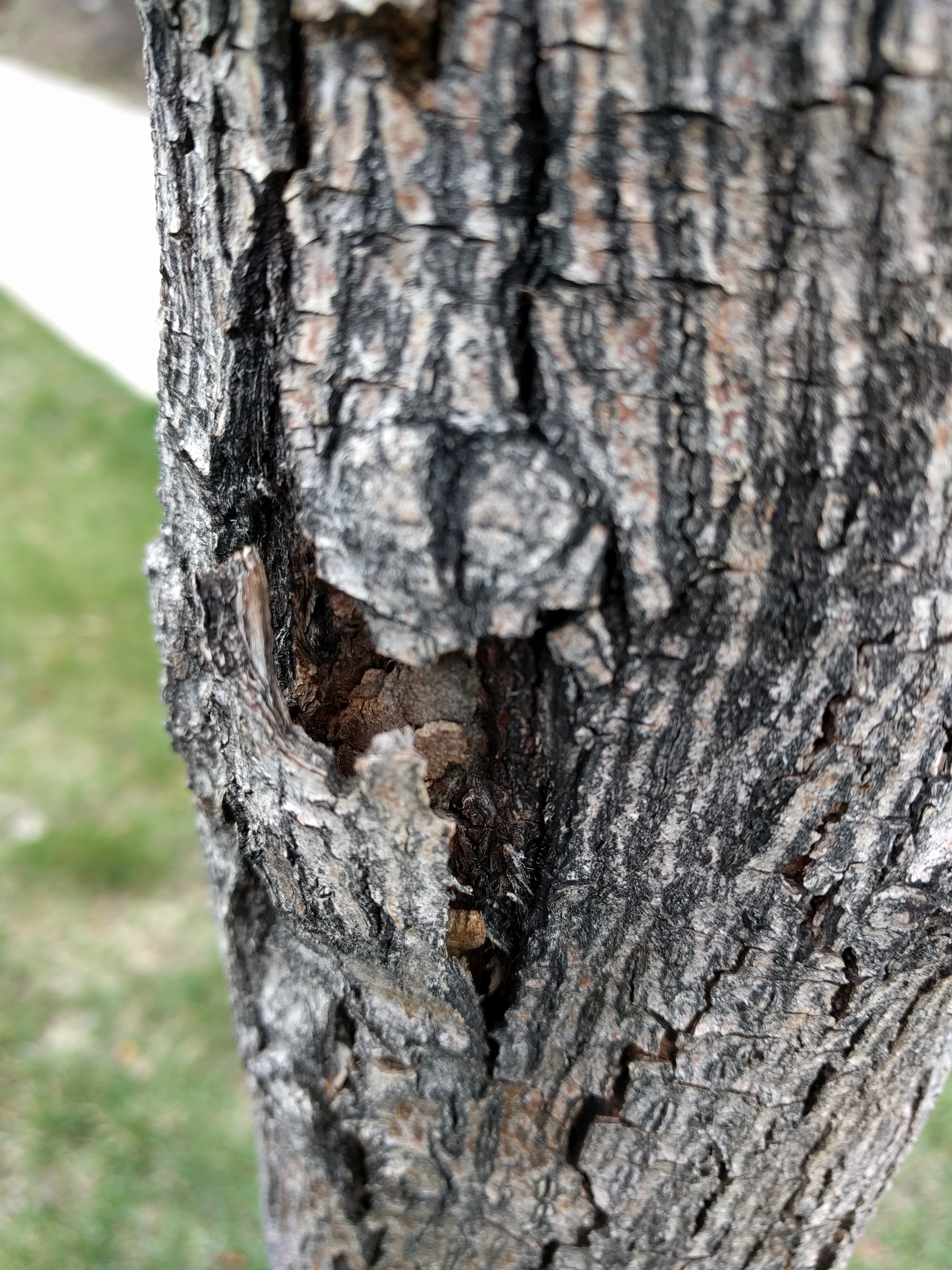 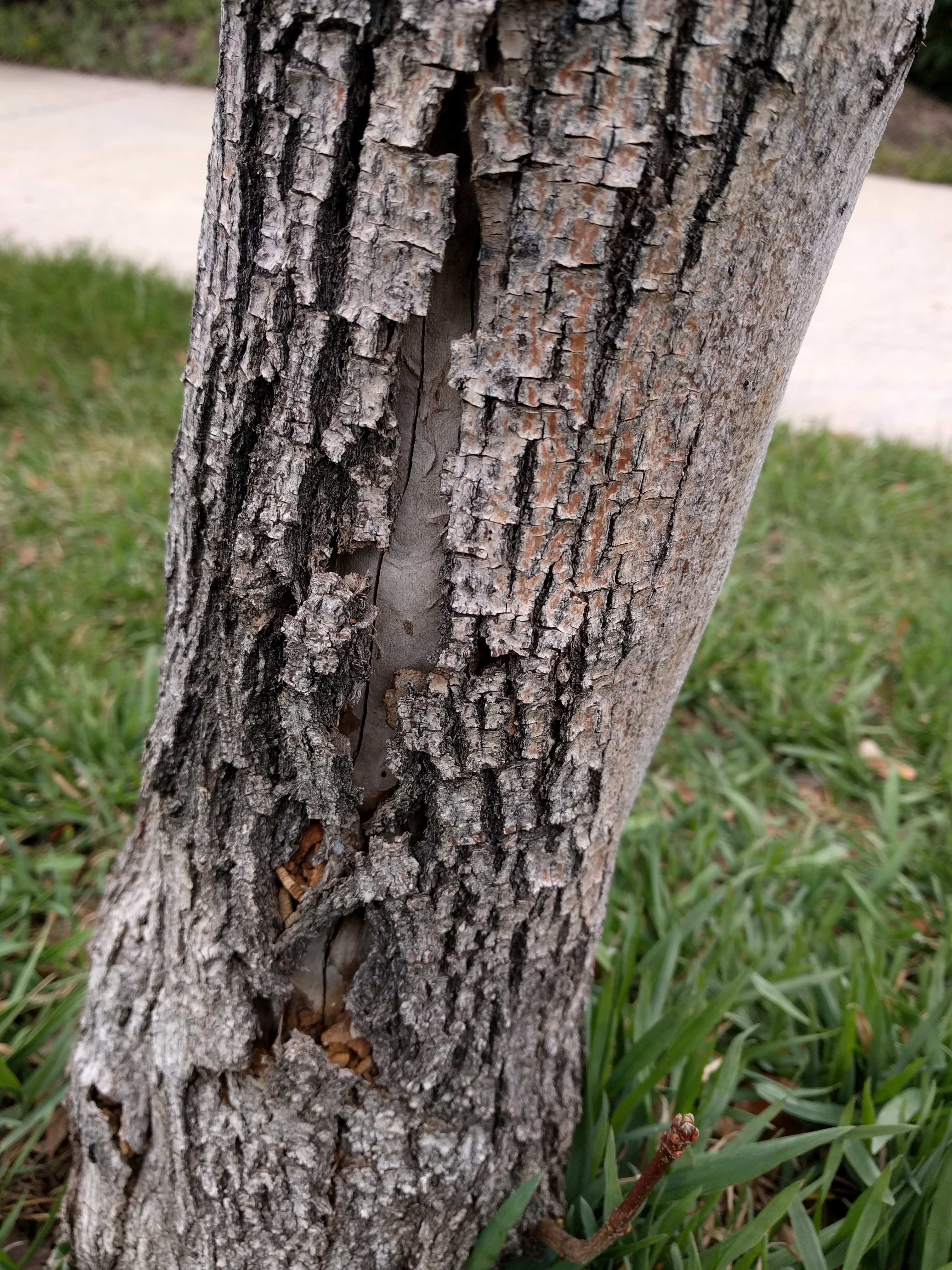 East side of tree 3 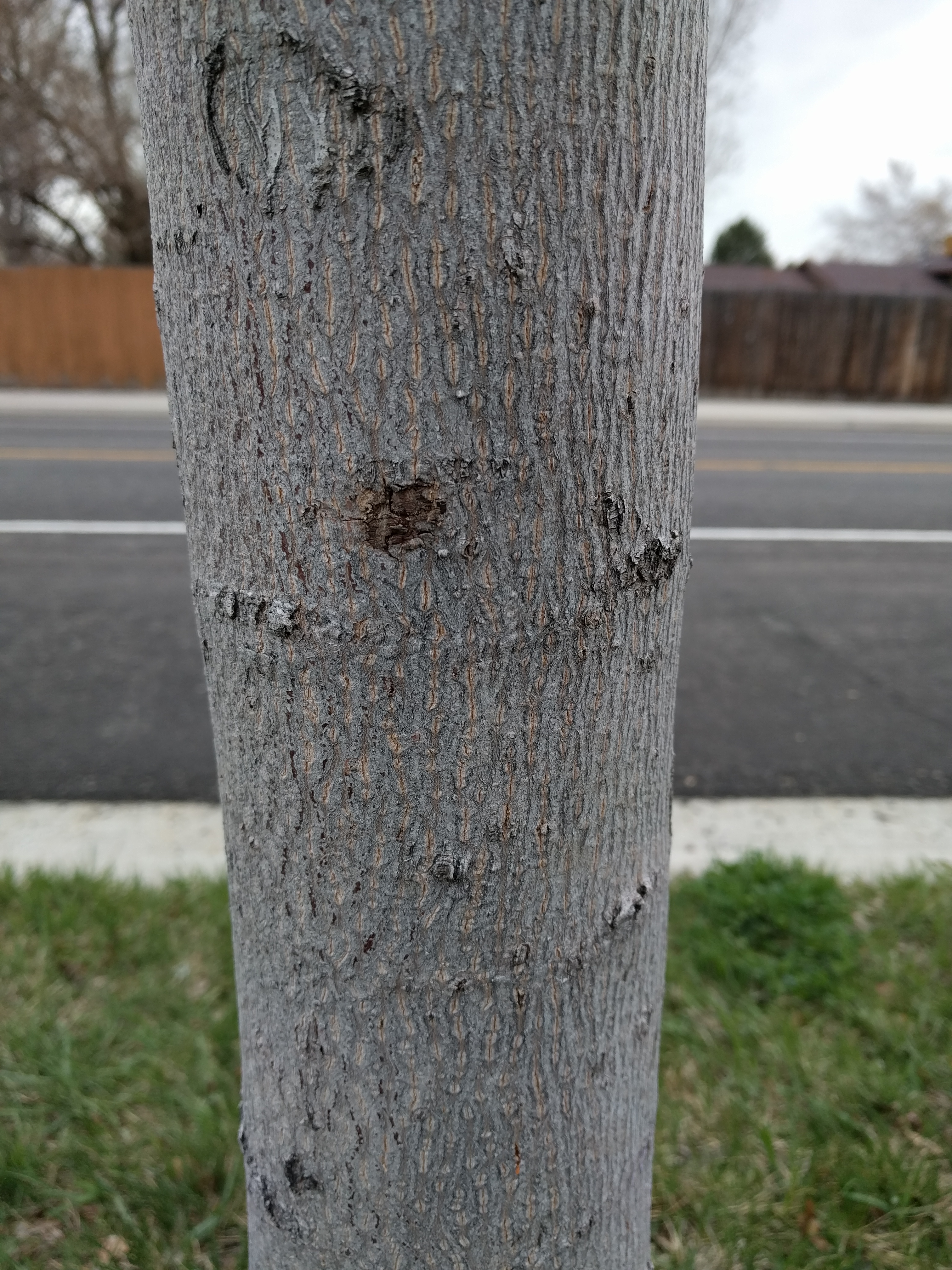 East side of tree 1 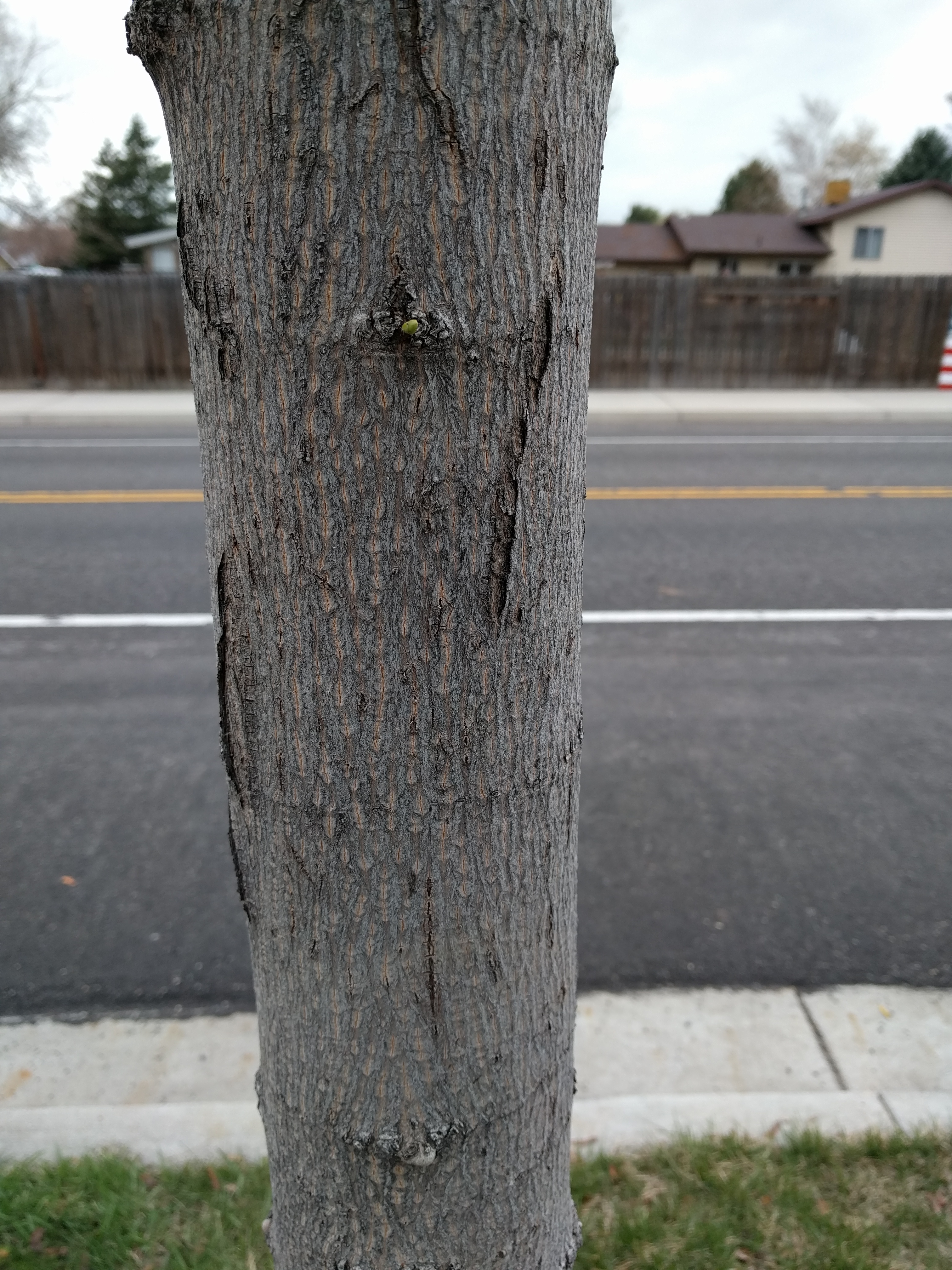 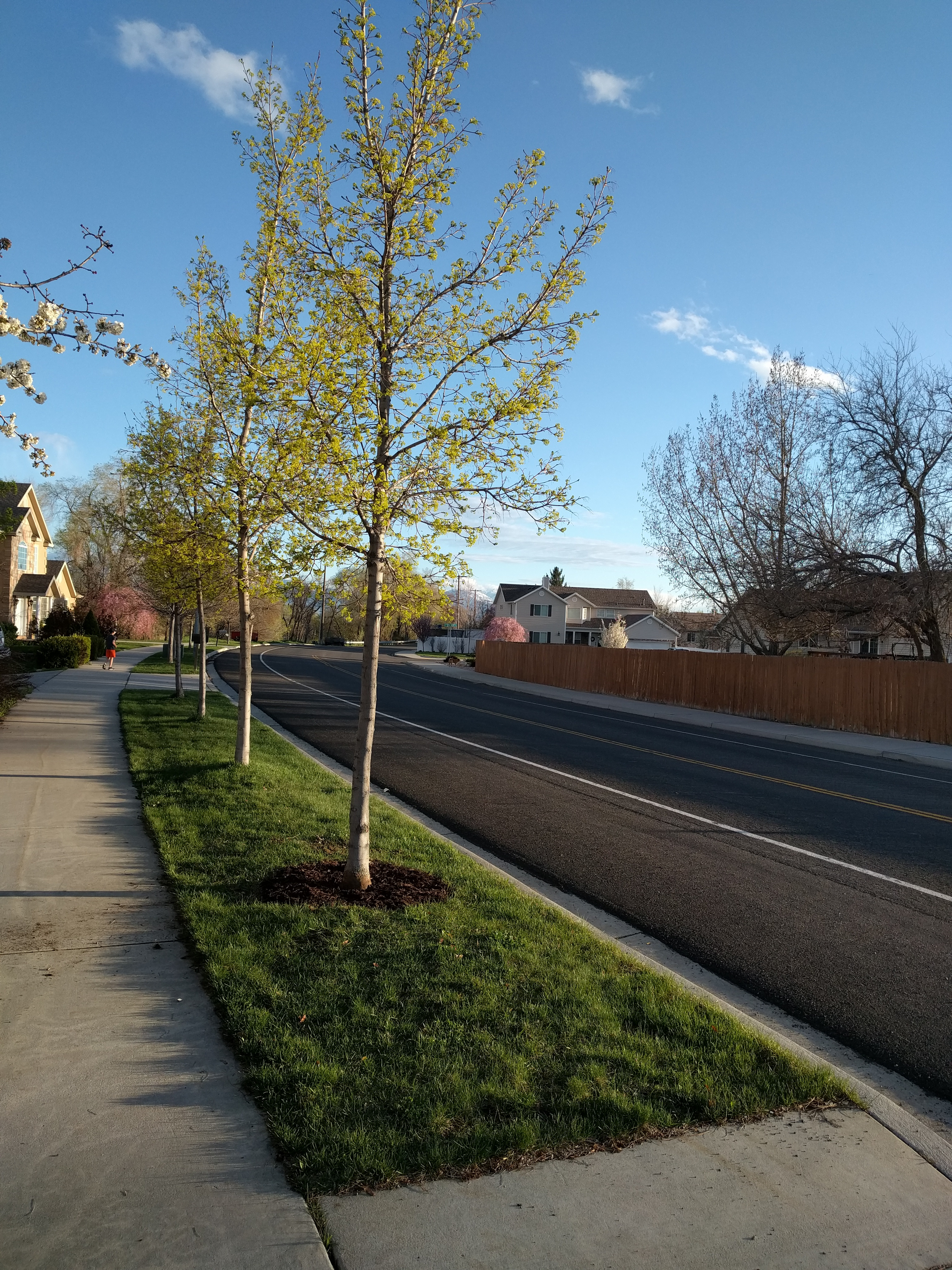 Full view of trees from across the street 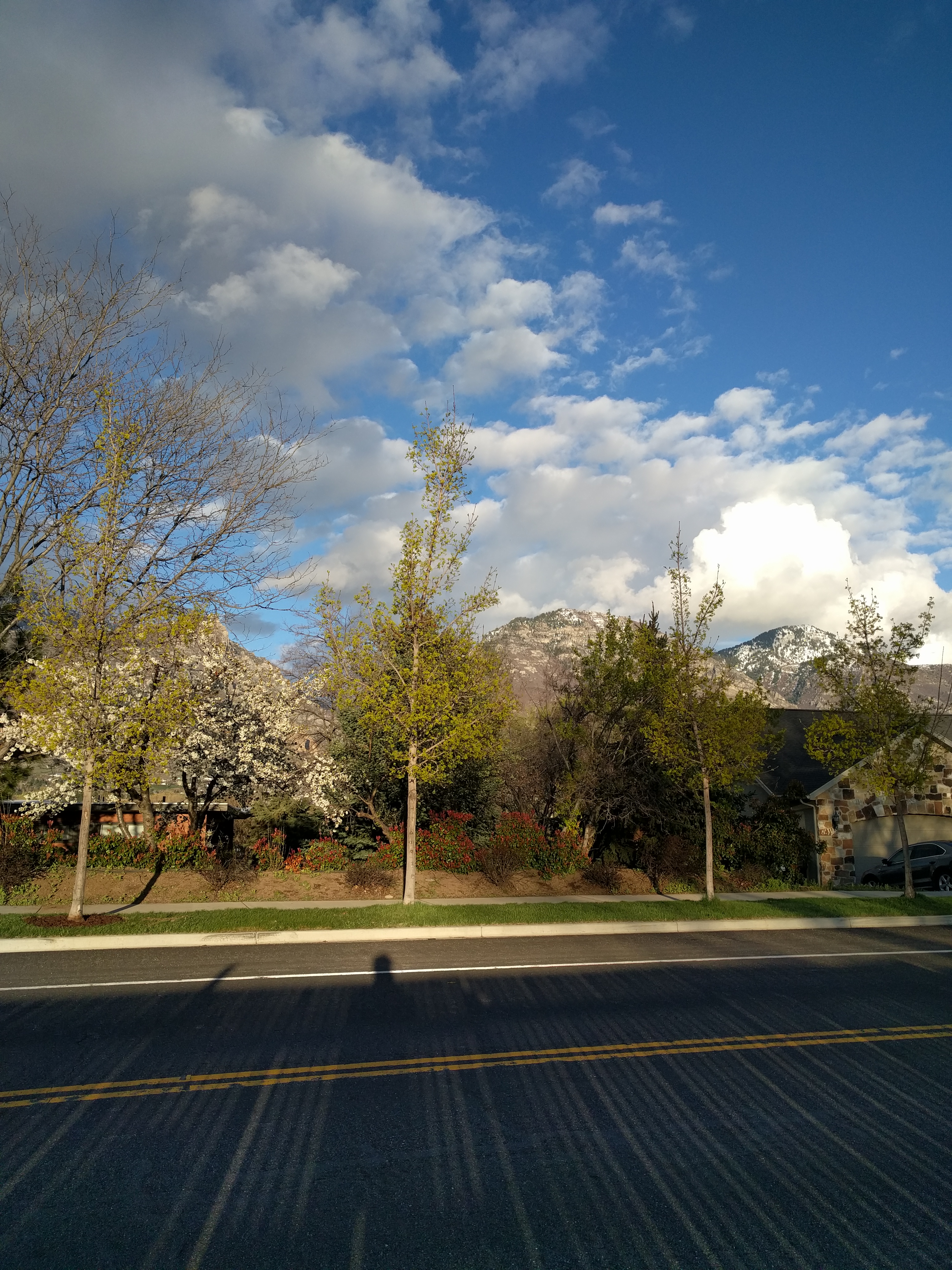 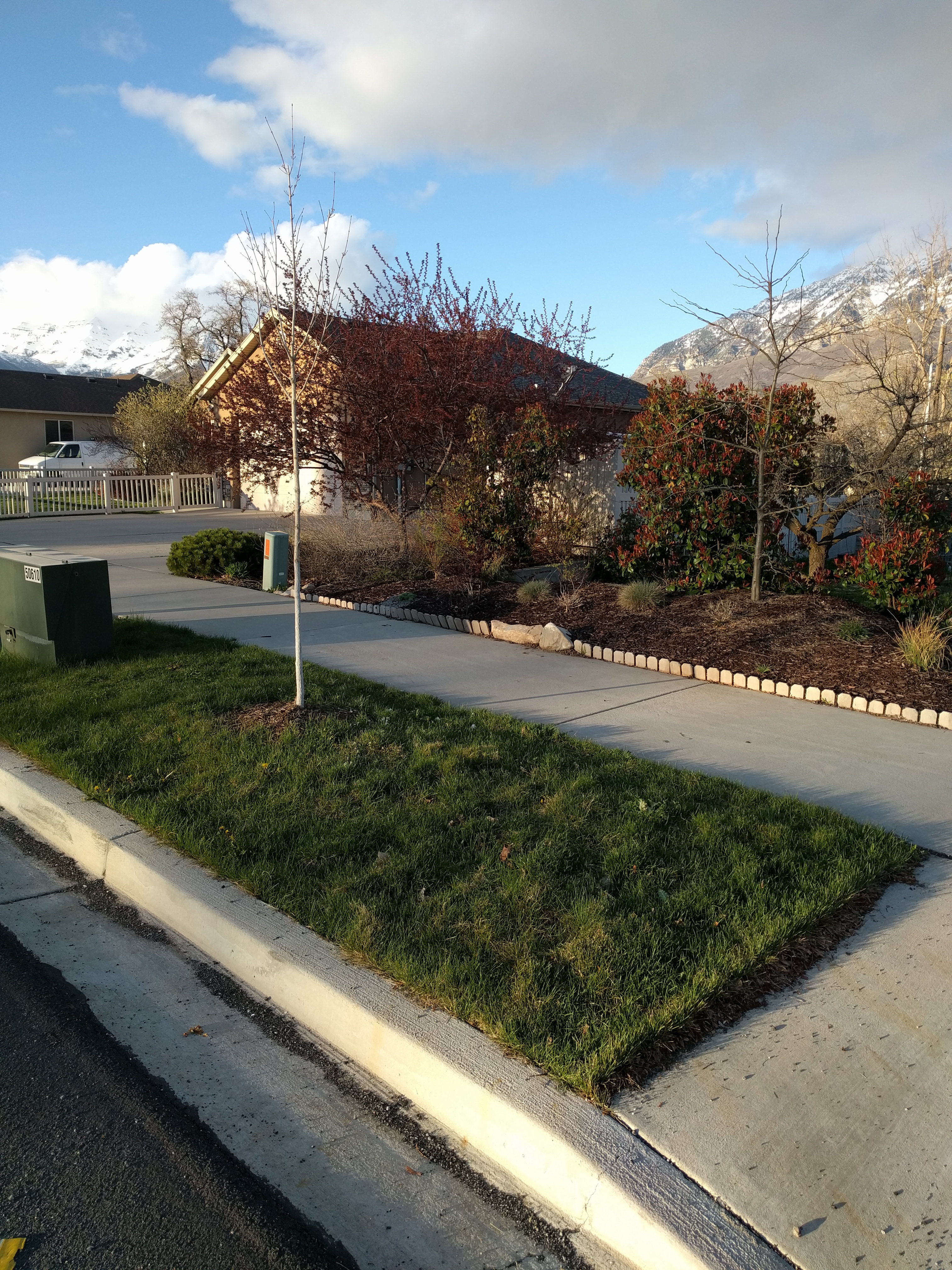 What is happening isn't just ONE thing. The heat from the asphalt is reflecting on your trees causing the bark to thaw prematurely. Usually ugly but not a deal breaker. The thawed portion of the trunk might have killed the vascular system beneath the bark but not the entire circumference.

Your trees are surrounded by grass right up to the bark. This is a big deal to the health of your trees. Look at the first picture where you are able to see the extent of water being held to the bottom of your tree. This doesn't cause death right away but it allows bacteria to begin compromising the bark and vascular system...this does kill a tree and causes them to become weakened and susceptible to wind damage and then insect damage. And kids are just attracted to peeling bark. They aren't doing any damage past what has already happened.

Remove that grass at least 2' radius from the trunk, get rid of all mulch touching the bark as well. Just the roots should be below the surface and pull soil, mulch, rock, grass away from the bark that should be above the surface to be kept dry by wind, air, and the bark's own chemistry. You might just get rid of ALL grass around those trees. Mowing and trimming are another danger to the bark of your trees. Get rid of any staking. Staking only makes the trunk and root support systems weaker. Right now you want movement by the wind which causes your trunks and roots to get larger and stronger. Have you ever had a limb of your own in a cast for a few months? That is what happens when a tree is staked.

Please post a picture of the entire group of trees. What have you added, such as fertilizer. How do you water? Who planted these trees, the HOA? Who mows and trims the grass around these trees. Have you had an arborist diagnose these? 5 trees is an investment and if one has broken off this is a good wake up call to save the others. How about pruning?

This is physical damage. As the knowledgeable Ecnerwal mentions something hard hitting the trunk of the tree would do this. Trees compartmentalise damage so the actual incident could have occurred a number of years ago. The bark probably died within a year and was just literally hanging on. Kids peeling the bark were just exposing the damage of some time ago.

Sadly this kind of damage can also happen during transport. Inadequate equipment or just plain sloppiness when it was moved to the site and planted are a possibility.

As long as least half the bark is continuous from ground to the top the tree will survive. With only half a circulatory system you would expect to see more water stress in dry times and weak growth above the damaged area.

Stormy mentions painting the trunk to prevent sun scald but this is normally done on thin barked trees like magnolia or young trees. Check with the local arborist or city resources to see if this is an issue in your area.

Could be a leopard moth (Zeuzera pyrina) infection, if this happens again on the birch- it could be this? life cycle takes two years. The caterpillars eat straight into the bark killing the young trees- no cure.

Not the answer you're looking for? Browse other questions tagged trees diagnosis or ask your own question.

17
How should a lemon tree with yellowing leaves, peeling bark, and small fruit be saved?
5
Why does my tree have splitting bark, dripping sap, and dead branches?
2
Corkscrew Willow Bark Peeling and Bugs
4
What should we do with a 7-8 year old honey locust tree that has been damaged by disease?
5
Why are large sections of bark peeling off these birch trees? Is it contagious?
6
What can I do with a large, old tree?
10
Name of Southern California tree with a peeling bark?