Why are all my houseplants “leggy”?

I have basically no experience of gardening.

I have a collection of plants on (what I think is) a relatively sunny northwest-facing window sill. I have basil, mint, geraniums and a chilli plant.

They all seem relatively healthy, but ALL of them are much 'leggier' than I would like/hope/expect.

The mint plant is a supermarket "buy a living pot" effort. The leaves that are left that are from the original plant are nice and big, but all the new growth (which has come off perpendicular to the original stems) is growing as very long, very thin stems with very small leaves. More akin to runners, than stems.

The basil is similar.

I would expect the geraniums, to look like this:

That is to say, a dense bushy sort of effort, leaves growing fairly directly off the existing woody stems, staying quite contained. Long stalks growing for flower heads.

Instead, I'm getting a gangly sort of thing, with all the leaves on long (10-15cm) individual stalks, and the core stem growing fairly rapidly outwards.

When I was given the chilli plant (over Christmas) it was a single thick woody trunk (5-7mm diam) that went up and then split into a crown. It was basically bare leaves, but is now growing well. But it's mostly growing long new stems from the base - it's now looks like a set of ~4 plants grown in the same pot?

Normally, I'd look up "how to care for < plant >", but given that I'm seeing the same sort of growth from all the plants, I'm wondering whether I'm doing something systematically wrong?

More info on the windowsill:

Facing almost dead northwest, in North London. It receives direct sun from about lunchtime through to sunset. I think my description of "sunny" is probably misleading: the window is large and not occluded at all, whereas the other windows in the flat open onto "inset balconies" and thus are fairly dark even when the sun is on that side of the flat. So I guess I think of that sill as being sunny by comparison? 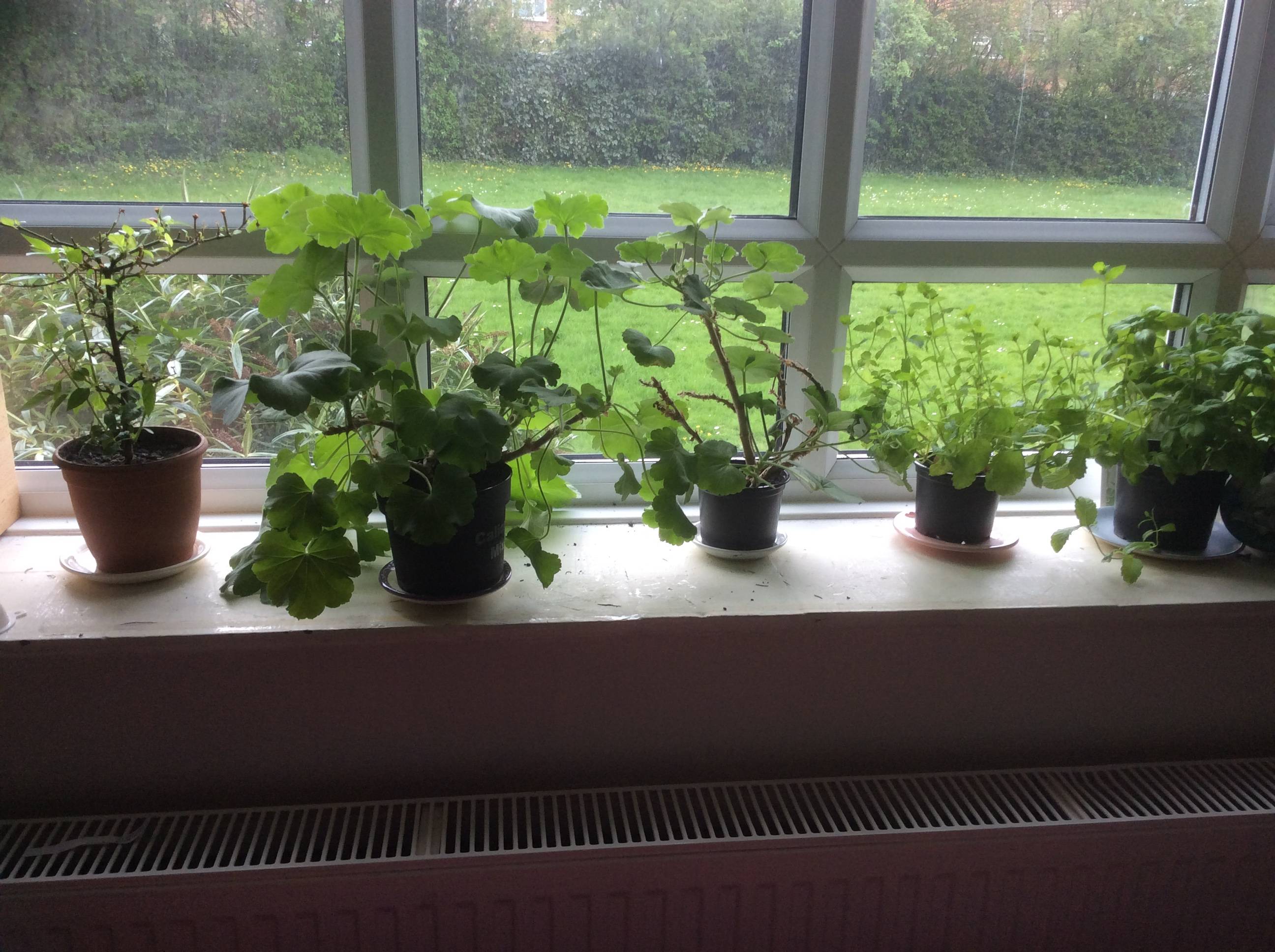 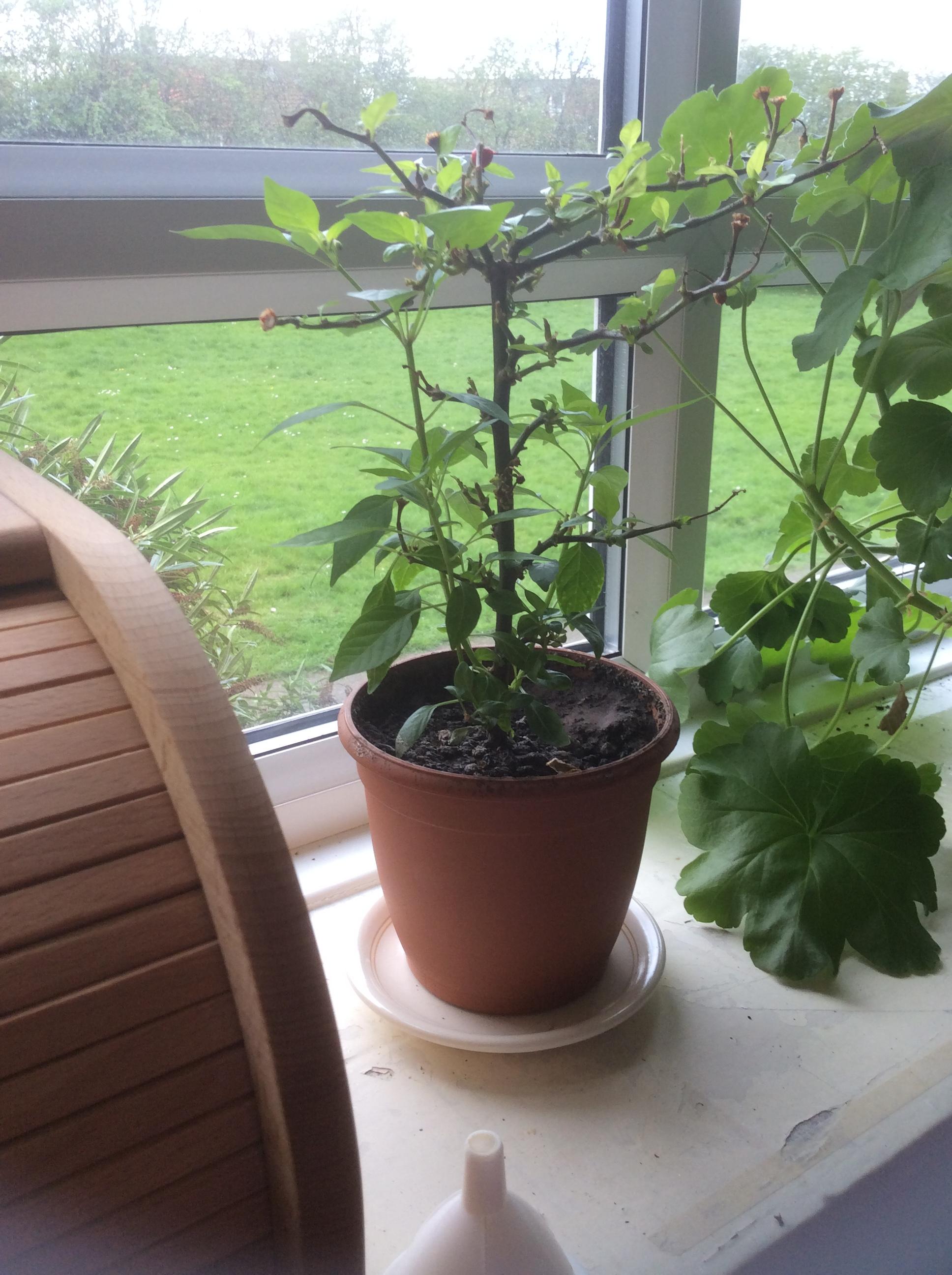 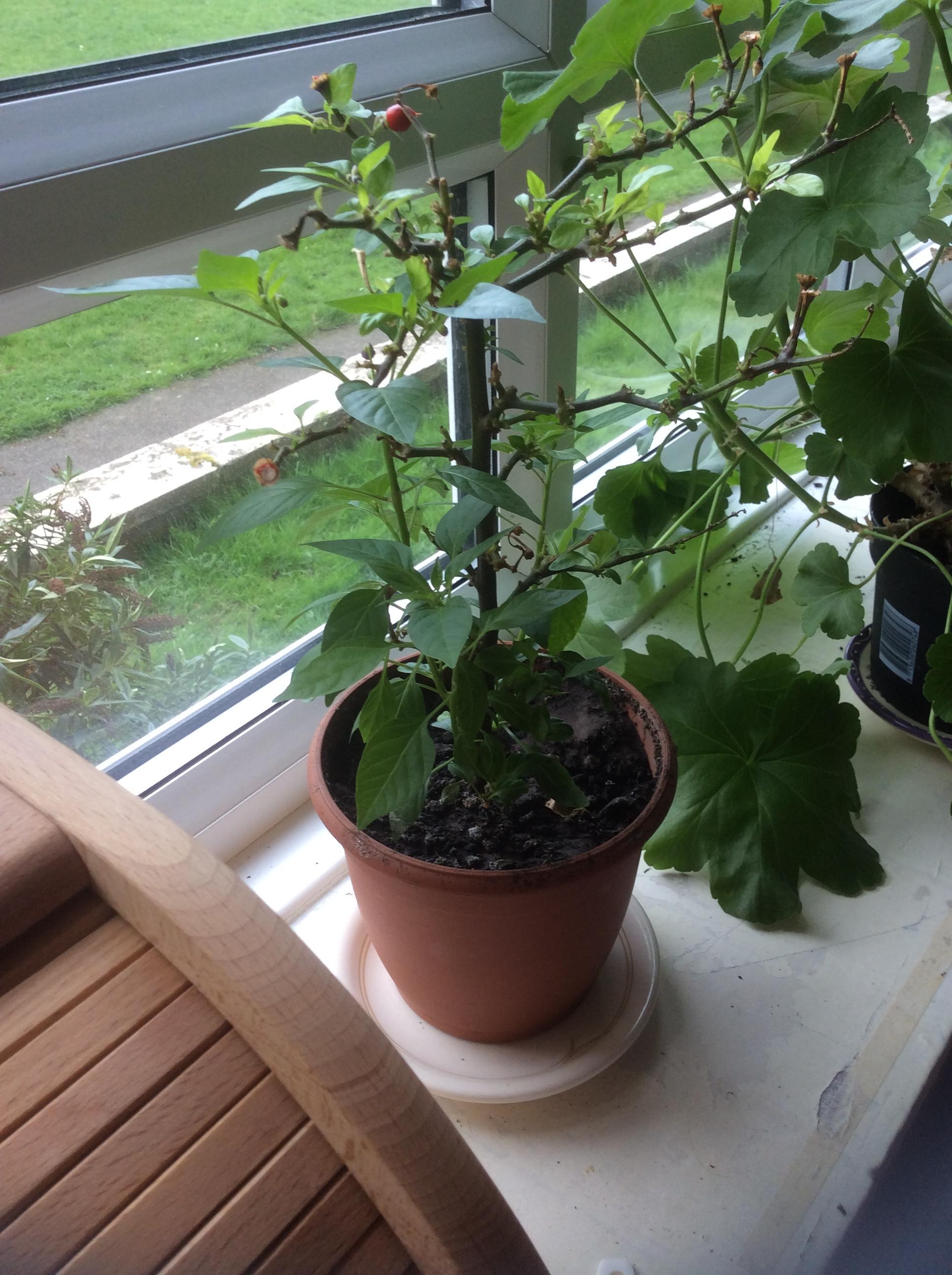 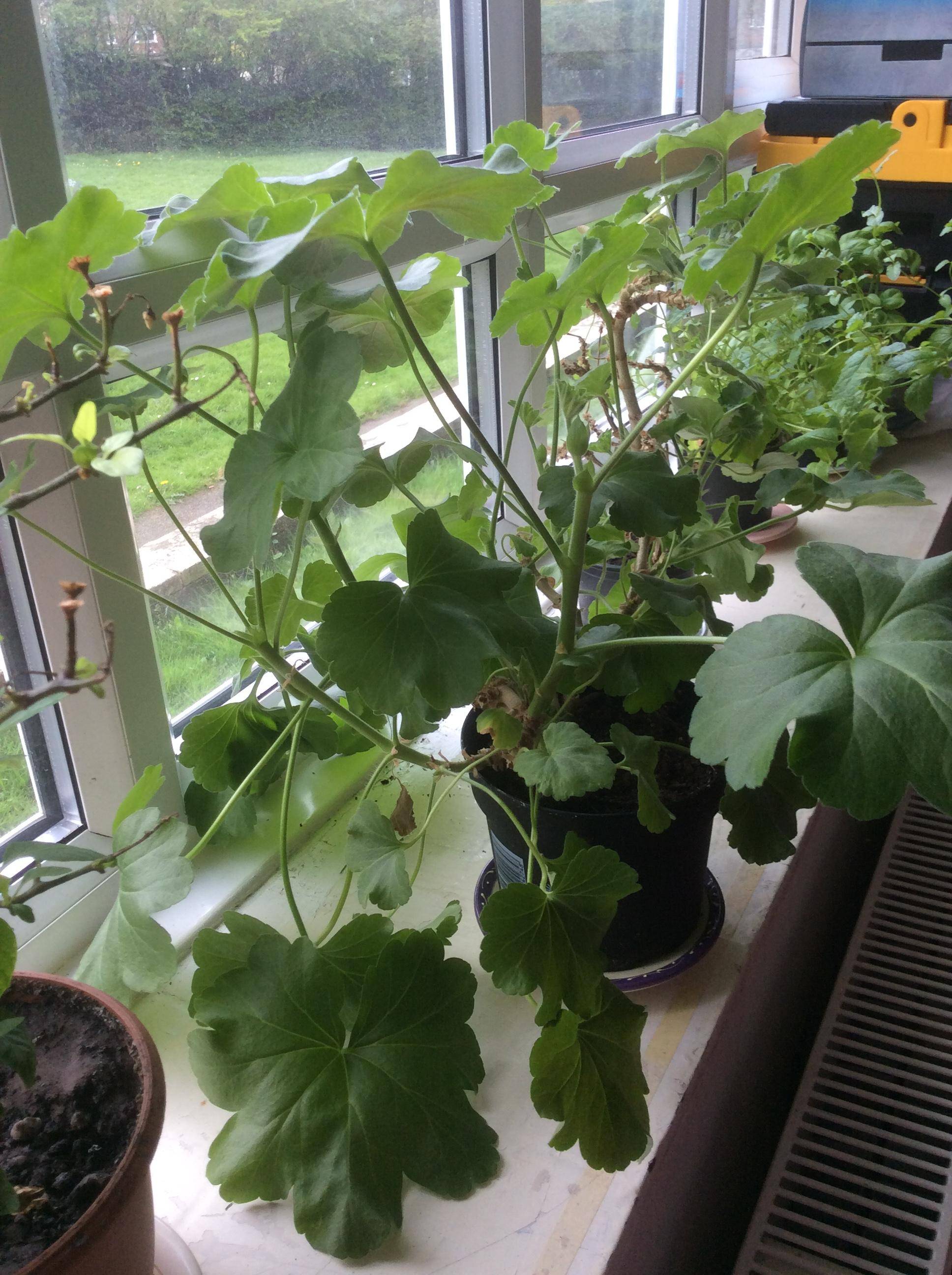 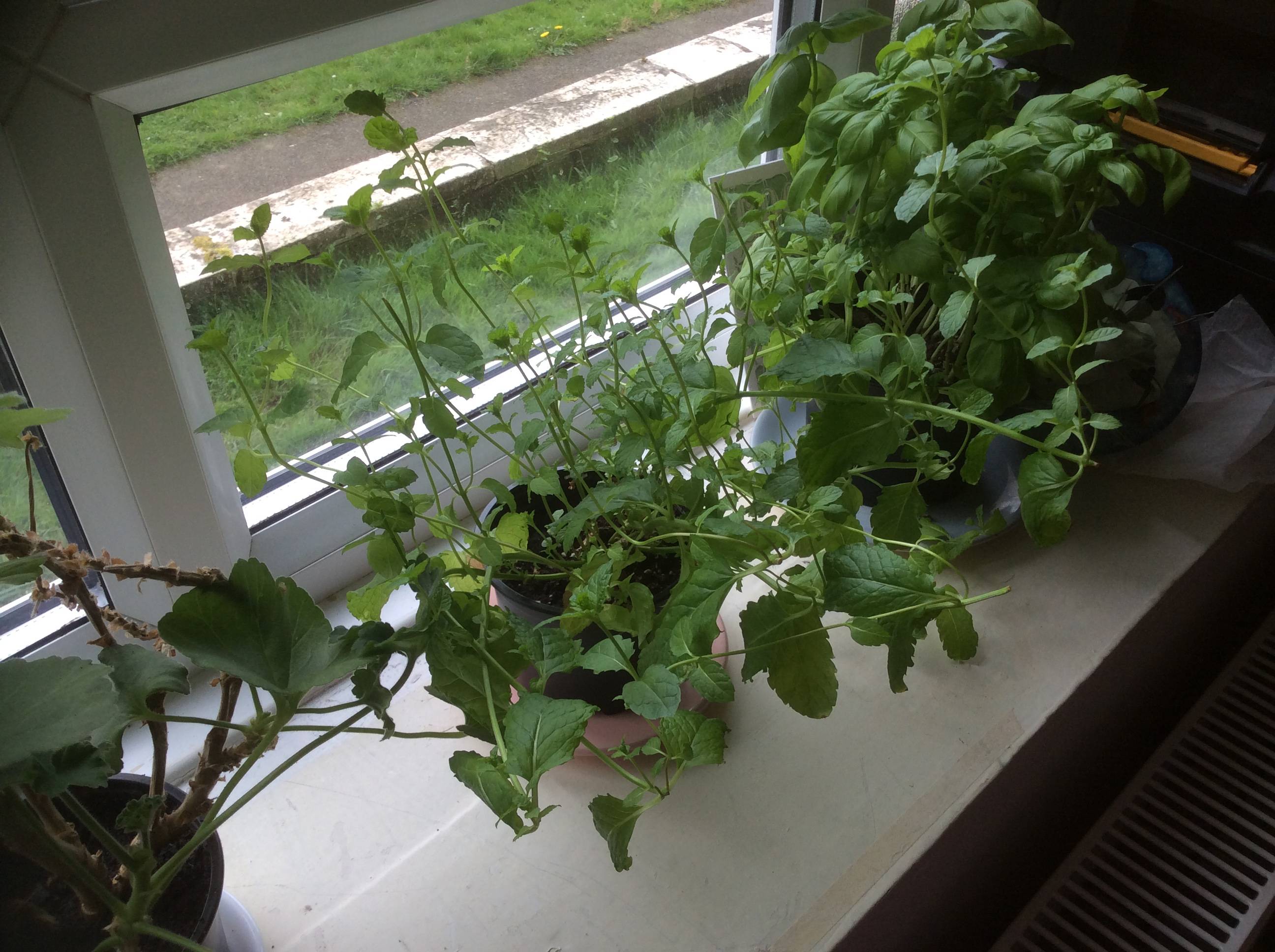 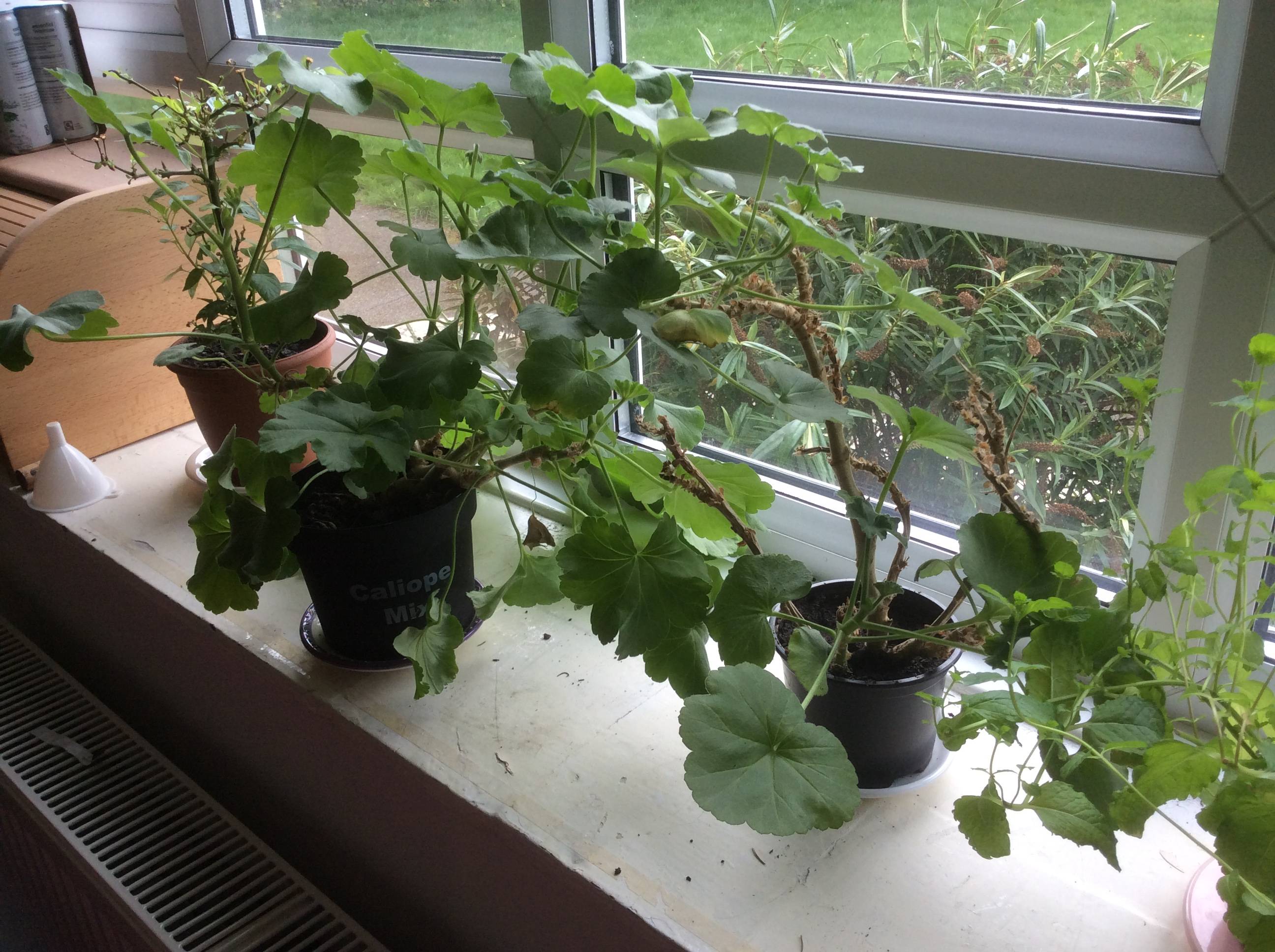 Happy to provide further pictures if you can tell me what you need to see!

If its a north west facing windowsill indoors, it will receive afternoon sun - but there's not much of that about when the days are short. Legginess (properly called etiolation) is largely caused by low light conditions; your plants are light deprived, but that's not surprising, given they've been indoors all winter.

The mint very likely needs to be turned out of its pot, split into sections and then repotted individually, and should now really be stood outdoors after hardening off, although you can keep one indoors if its easier for cooking. Mint likes a deep root run and it spreads by stolons underground, often meaning the central, original part dies out, but it can't do that in a pot.

Basil is an annual plant, so when it becomes unproductive and gawky, bin it and get another, especially if you want to keep it indoors.

The Pelagonium (commonly called geranium) should now be cut down to about 2 inches, repotted into fresh compost and watered, and put outdoors if possible. Anything you put outdoors will need hardening off for a week or so till it acclimatizes.

Without an image of the chili plant, it sounds like you should cut down the central stem and allow the new growth at the base to take over, but seeing the plant would confirm (or not) whether that's what you should do.

Sorry, the images weren't there when I started my answer, so I never saw them till I'd posted it.

All the Pelargoniums appear to need larger pots and a sunnier position - if you have space outdoors, cut them down by at least half, preferably two thirds, repot and stand outdoors, assuming you can find a sunny spot for them. These plants like as much sun as possible, and will become a bit leggy in shady conditions.

Re the chili plant, that may have been trained as a standard if it was one stem, but its now shooting from the roots. You can either cut down the woody stem back to the base and and let the newer growth carry on - not sure that won't need a bigger pot too, or, alternatively, if you want to try to keep it as a standard, you'll need to remove the new growth around the central stem.

As for the mint, it doesn't look too bad - it's just suffered from insufficient bright light/sun. If you cut it back, you might find it improves along with light levels through the window, but it would do better in a brighter situation. It will need splitting and repotting sometime this year though.

Your Pelargoniums will be fine if you cut them back - if you don't, and you continue to keep them inside, you'll have long, droopy leggy plants in a couple of months with stems that won't have the strength to support flowers. Outside in pots is fine - if your balcony is comprised of a solid wall for the lower four feet, stand the plants on something to raise them up to get more sunlight when its available; ambient light levels should be greater out there, but at least half a day's direct sun is essential for Pelargoniums. The other difference outdoors is that they're subject to breezes and wind, and that makes the plants have stronger and shorter stems too, so they'll look more like the ones in your image of the potted plant on the step outdoors. Feed them with something like Miracle Gro general purpose weekly and water them as necessary, allowing them to drain freely. Rain is irrelevant from the point of view of watering, it doesn't get into small pots anyway, so you still need to check and water them. In pots that size, if they get sunlight, they'll likely need watering a couple of times a week, daily when its very hot. When you cut back, cut to just above a leaf joint and, if you like, use the offcuts to strike cuttings, as someone else suggested.

As for looking at greenery indoors, the plants you have are not actually indoor plants, so buy a couple of houseplants - Peace Lily, for instance, does not like direct sunlight, just needs good daylight. Most houseplants do better without direct sunlight anyway. I think I can see the top of a heater under that window, and being on a windowsill above a heater is not a good place for any plant to be, so work out whether there's anywhere with good daylight, away from heat sources, that you can place houseplants.

Not the answer you're looking for? Browse other questions tagged houseplants plant-health containers or ask your own question.

26
How do I help my kitchen window herb garden thrive?
14
How to prevent Sempervivum tectorum (Common Houseleek) from growing in length and not width?
4
Why is my Japanese painted fern struggling?
5
Why are some clippings of this plant apparently pure green and others mottled with yellow?
4
Why are my morning glories stunted/deformed?
2
New to houseplants - what's wrong with my chilli plant?
2
Why are the leaves on my mint plant drying up and brown bumps are forming on the stems?
3
Houseplants keep getting infections
6
Is my Kalanchoe healthy?
1
Should I separate the cilantro plant stalks? I bought a plant from walmart