How to tame a Pyracantha?

I have an old house (built in the 50s) on a large lot (~ 1/2 acre) that was previously owned by some older folks that didn't keep up with the landscaping very well.

I've been slowly trying to get it in order, and while I have a ways to go, my current issue is with a monstrous pyracantha hedge. The back of the lot slopes down quite a ways to a street about 20 ft below. 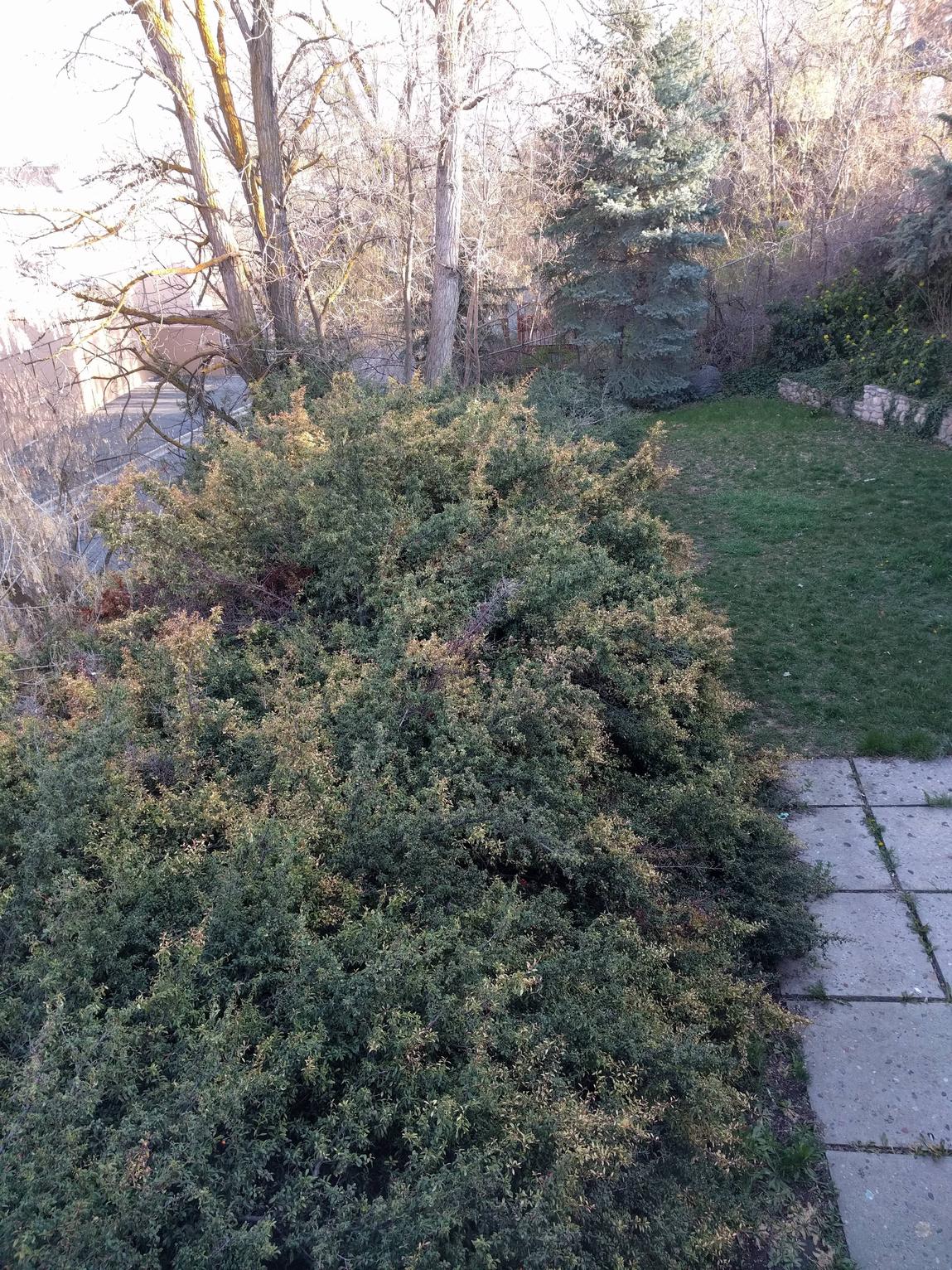 The pyracantha covers most of that hillside. It's grown significantly in to the back yard area as well.

What are some effective ways of trimming this beast back? I've used loppers, sheers, and a hedge trimmer. 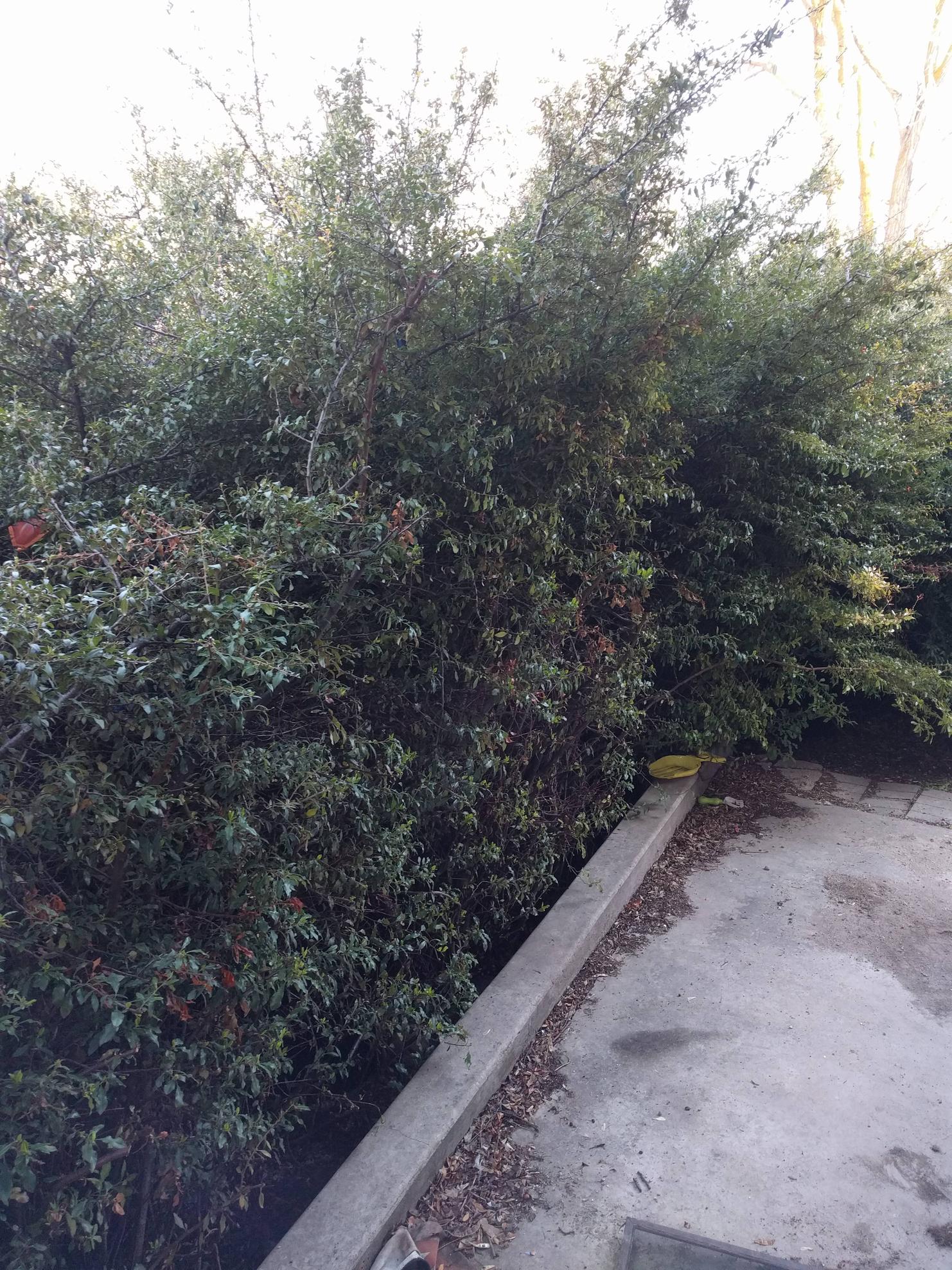 The loppers and sheers works alright, if a bit slow. The hedge trimmer wasn't that effective as many of the branches are a bit too thick. Any advice on understanding how far back I can go? 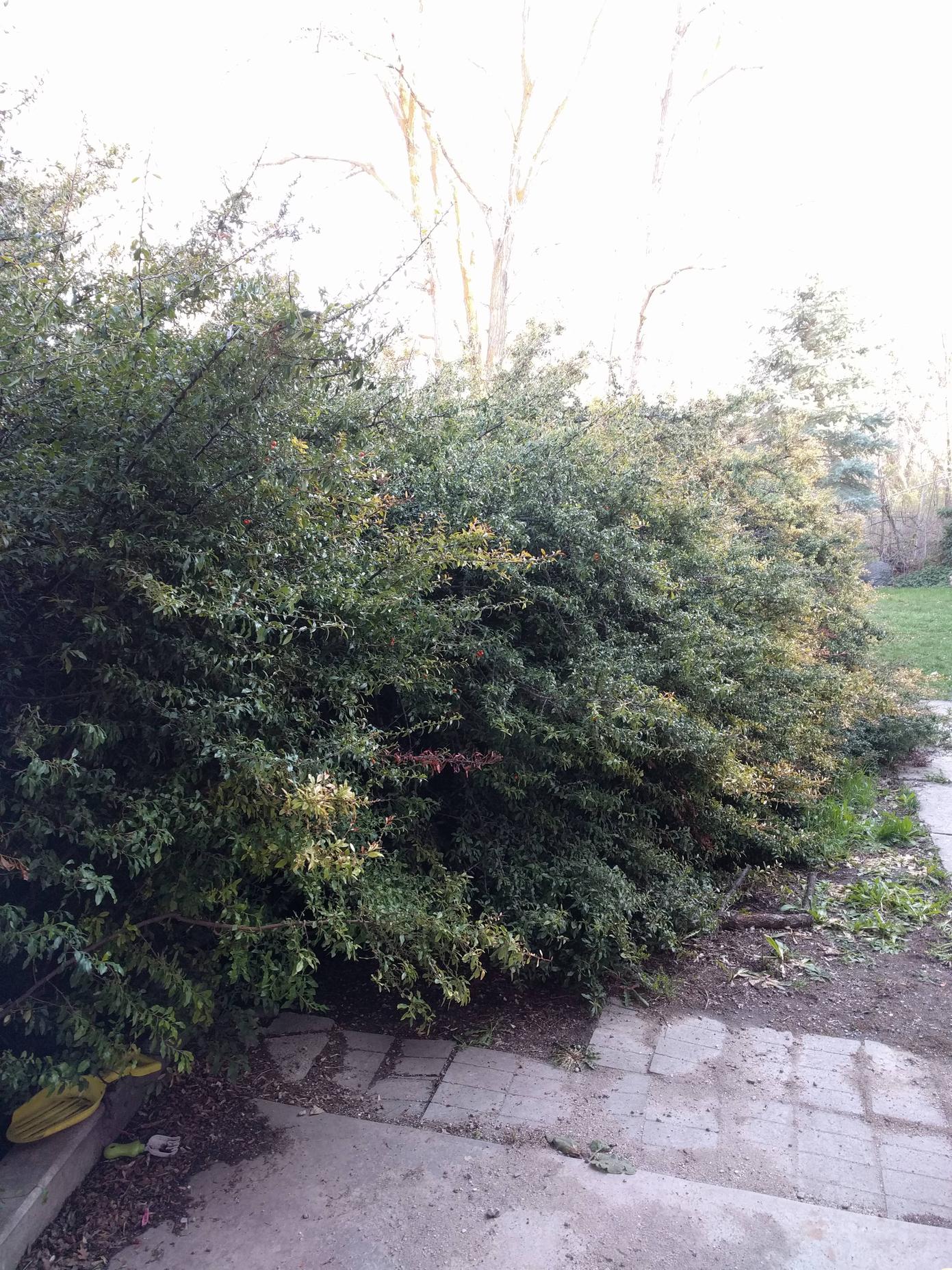 I'm OK with sacrificing the look of the hedge as I'm guessing this thing has encroached quite a bit in to the yard space (At least a few feet, probably 6+).

Also, any good advice on how to dispose of all this material? I have a chipper, which I have used in the past, but it's even slower than cutting because of how hard it is to handle the branches. For those unaware, pyracantha is also known as firethorn, and for good reason. It has huge needle like thorns that go through just about everything. I've found that using rose gauntlets and going slow I can mostly avoid getting stuck. Mostly.

There's no easy answer I'm afraid - pyracantha hedges can be kept neat and tidy and shaped to whatever form you choose, but once they've overgrown, they're less easy to cut because of the thickness of the stems.

Loppers, secateurs and a hedge trimmer are exactly the tools you need. Use the hedge trimmer to get it to roughly the height and width you want - at this stage, don't worry about the thicker stems being chewed and left behind, sticking out. Clear away the debris so you can get closer, then go over the plants,cleanly cutting any thicker stems with either sharp loppers or secateurs - because they're thick enough to be left behind by the hedge trimmer, cut them a few inches shorter than the rest of the growth. What you're attempting to achieve is production of softer, new growth which will be easier to just run the hedge trimmer over a couple of times a year. Don't attempt to reduce the height down beyond 4 or 5 feet at this time of year - taking it down much lower and narrower counts as renovation, and that is best carried out in winter, when the plants are not actively growing.

As you can tell, this is quite a tiresome, time consuming task, not to mention the pain aspect from the nasty thorns, so if there's something you'd rather have growing there instead of the pyracantha, it's probably worth considering having it all grubbed out, including the roots, emending the soil and replanting with something less painful to manage. The only reservation is that your pyracantha seems to be growing at the top of a steep slope, so some thought is required because of the risk of erosion if you remove the whole thing all at once; it might be better to remove and replace in stages, as it covers such a wide area. It's hard to tell how extensive its spread is down the slope, but from what you say, it covers a large area, so possibly removing the top part, to a width of six feet, nearest the paving, might be an option without creating significant erosion risk.

In regard to disposing of the cut material, there's no easy answer to that either - if its possible where you live, you could consider burning it, otherwise it's through a chipper and compost it.

Not the answer you're looking for? Browse other questions tagged pruning hedge thorns or ask your own question.

5
How & when should I prune a Weigela bush?
5
Pruning overgrown pear tree
4
How to encourage weeping cherry to grow larger
5
How can I stop removed branch stumps from spouting 'beards'?
2
Avocado from seed - to prune or not to prune?
2
What equipment to use for a large garden/lawn?
1
Cutting bush down to manageable size
2
How do I go about pruning a mature fig tree to a smaller size?
1
How do I prune the broken branches of my plum tree?
1
Ficus bonsai regrowth