What would cause pale patches and little brown spots on my Lemon Balm leaves?

There are pale patches and little brown spots on the leaves of my lemon balm plant. 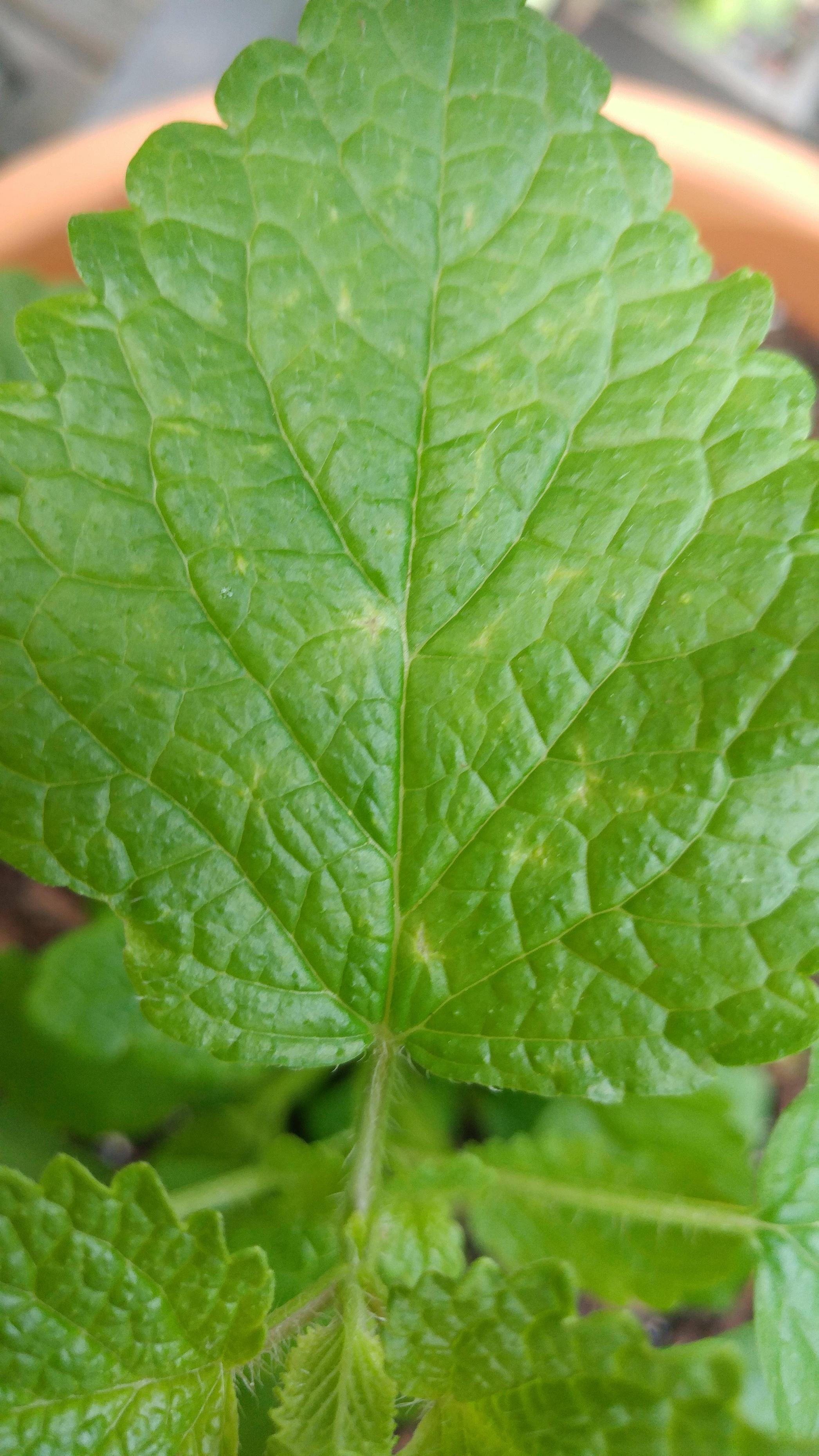 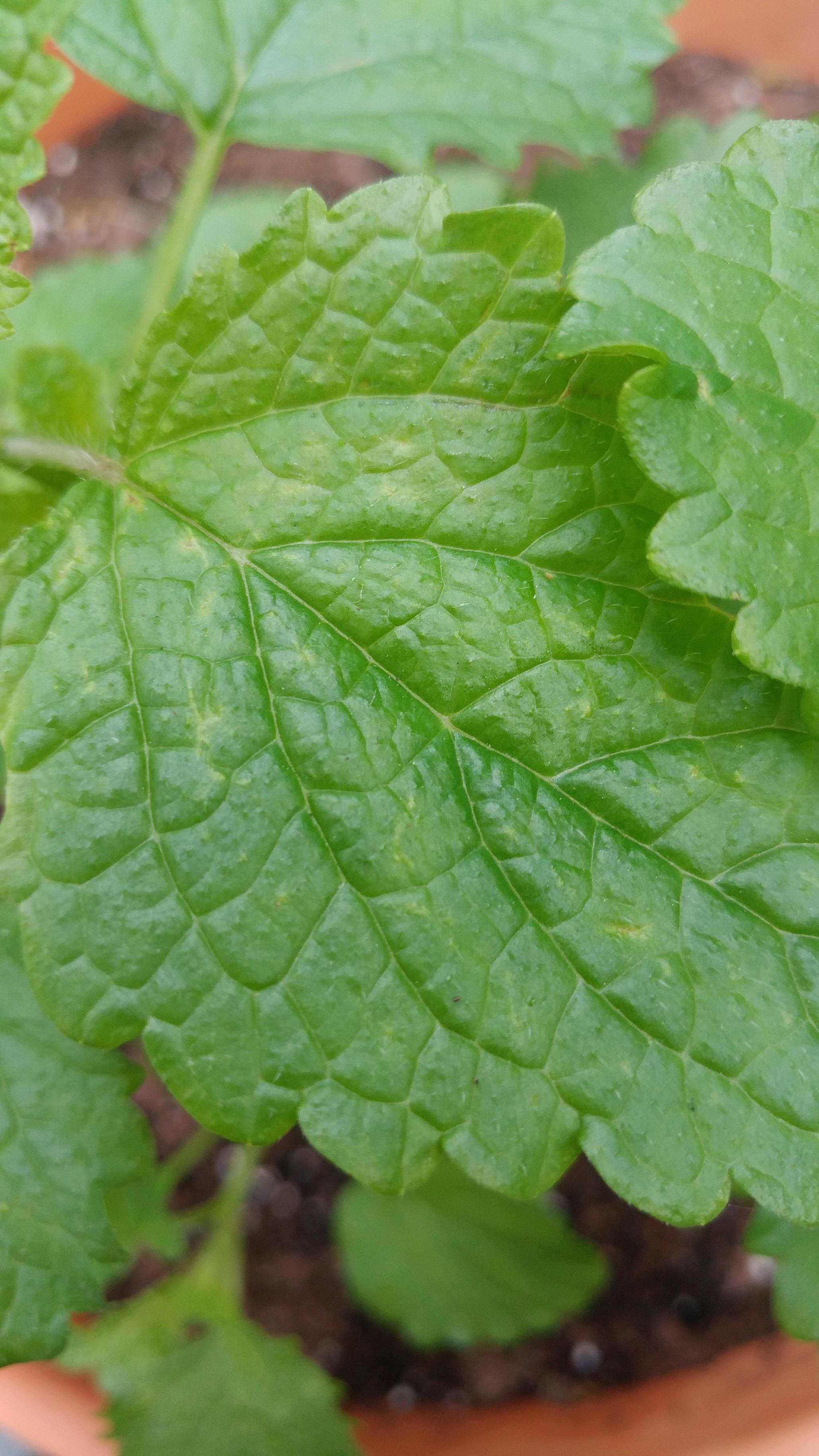 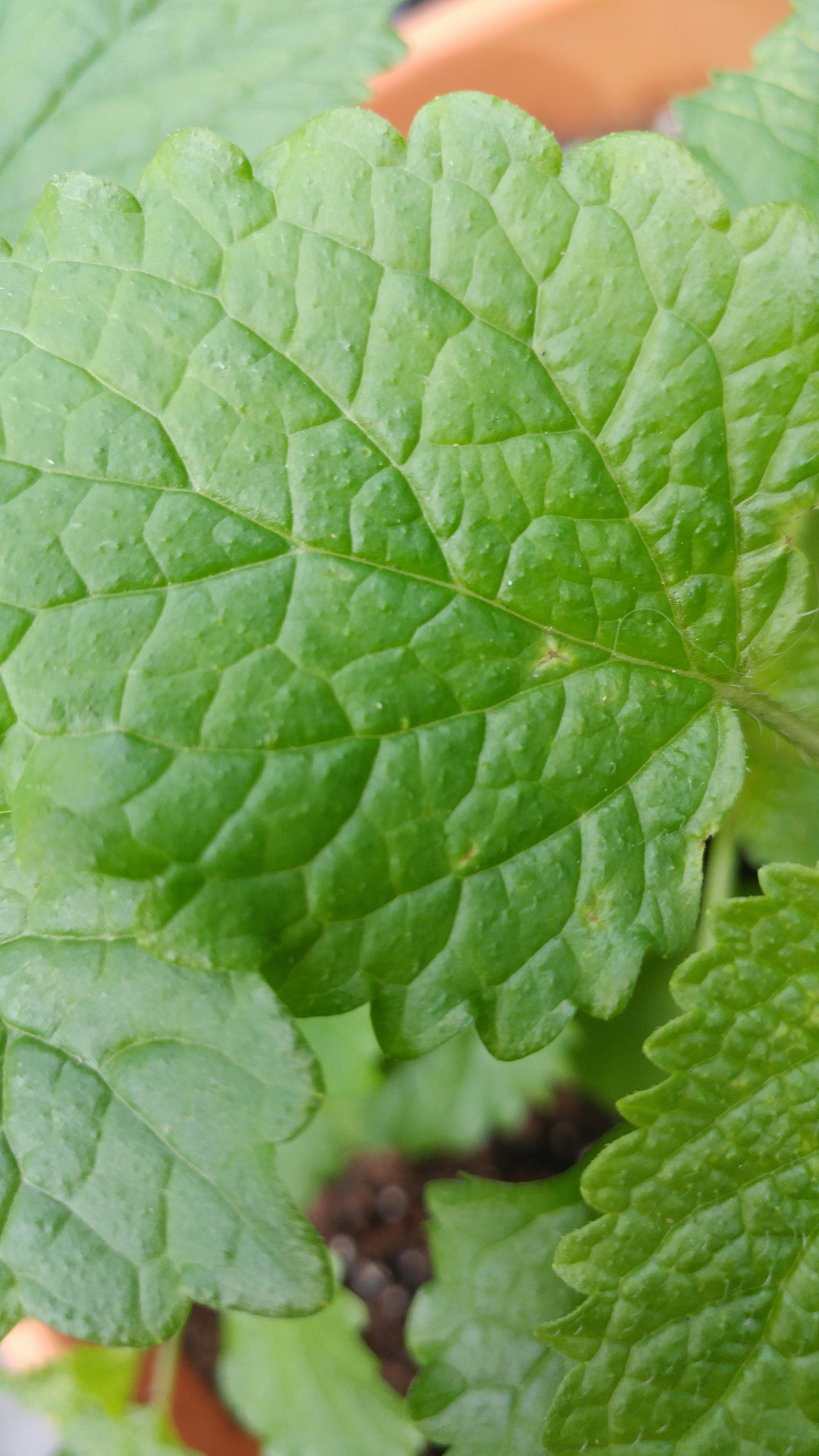 I recently transferred it from a six inch to a twelve inch pot. In the six inch one, I was watering it every morning until it dripped. Since it needs way more water for that to happen in this pot, I no longer water it every day; I just stick my finger in the soil knuckle deep, and if it doesn't feel as moist as it should, I'll add water. Was doing two cups every time, just started doing four this morning because I figure it needs to soak all the way through the soil, and even that doesn't cause dripping. Edit: I'm seeing moist patches forming on the outside of the bottom of the pot (it's Terra Cotta), so the water is definitely getting down in there.

It gets a decent amount of sun, mostly in the middle of the day and early afternoon, but it's difficult to determine the exact amount due to a bunch of oak trees in my yard.

I planted the thing roughly two and a half months ago, but totally forgot to keep track of the exact date. Lesson learned. The pale bits were appearing with much less frequency in the smaller pot.

Edit 2: Forgot to mention that I've been battling it out with these little orange worms for a little while now, they appear on my plant every now and then and seem to be very happy whenever it increases in size. Those are probably my problem. Can't seem to find what they are or how to get rid of them, though.

Edit 3: As of today I've also seen little flea like bugs and little black and white flies, all of which I'm pretty sure are contributing to the damage, which seems to be getting worse. Currently looking around for food-safe insecticides/repellants.

Edit 4: There's a little orange insect eating an even smaller black fly looking thing on one of the leaves, which makes me think that the black flies could be the issue and killing the orange things has been a mistake? The fly looks like it might be a soil gnat...

It sounds like you may be describing Thrips. There are a small flying insect that puncture plant leaves and suck out the juices. Here is an example of Thrip damage I found online. Thrip Damage

Lemon Balm is pretty vigorous and you may want to try an insecticidal soap treatment and removing any plant debris nearby that may be hosting them. Also, with this many insects it seems like you need to not over water the soil so much and work on improving the air circulation.

Are you using potting soil? No rocks or gravel beneath the the soil above the drainage hole? Have you looked beneath the leaves...get a magnifying glass to look closely. Looks like insect sucking to me. When you transplanted your lemon balm was the root system able to fill its original pot? Too large of a pot with garden soil for a for small plant is the kiss of death. Garden soil will have eggs and all kinds of stuff you do not want in any potted plant. You should be able to SOAK the soil and then allow to dry out...part of the drying out process are the roots sucking up enough water speeding up the drainage/drying. Too long being wet is when you get fungus. Watering everyday is a BIG NO NO. You have to allow the roots to work at getting the water and the soil has to drain so that there is always air around the roots for gas exchange. Way too much watering and if that plant too small for the pot it just won't make it. Lemon Balm is a wonderful TOUGH plant. Make sure you are using potting soil! Bottom of pot lifted off surface to enhance drainage and no rocks, gravel or packing peanuts beneath the soil. Look closely beneath the leaves and send back answers to these questions. We most certainly can help!

16
Is my Schefflera arboricola getting the right amount of light and water?
6
Is this mint fungus, or over/under watering my plant?
5
What is causing white spots and wilting on my Black Naga leaves?
5
What to do for the young avocado plant with brown spots on its leaves?
3
What is causing large white spots on my sweet basil seedling's leaves, and can the plant be saved?