What is the black and yellow plant at the base of my fence?

As you can see, next to the fence at the bottom there is some sort of black and yellow plant with a corn-like looking texture. I can't find anything that says what it is. May it also be noted I live in the U.K. Does anyone know what it is or at least if it's a plant or flower? 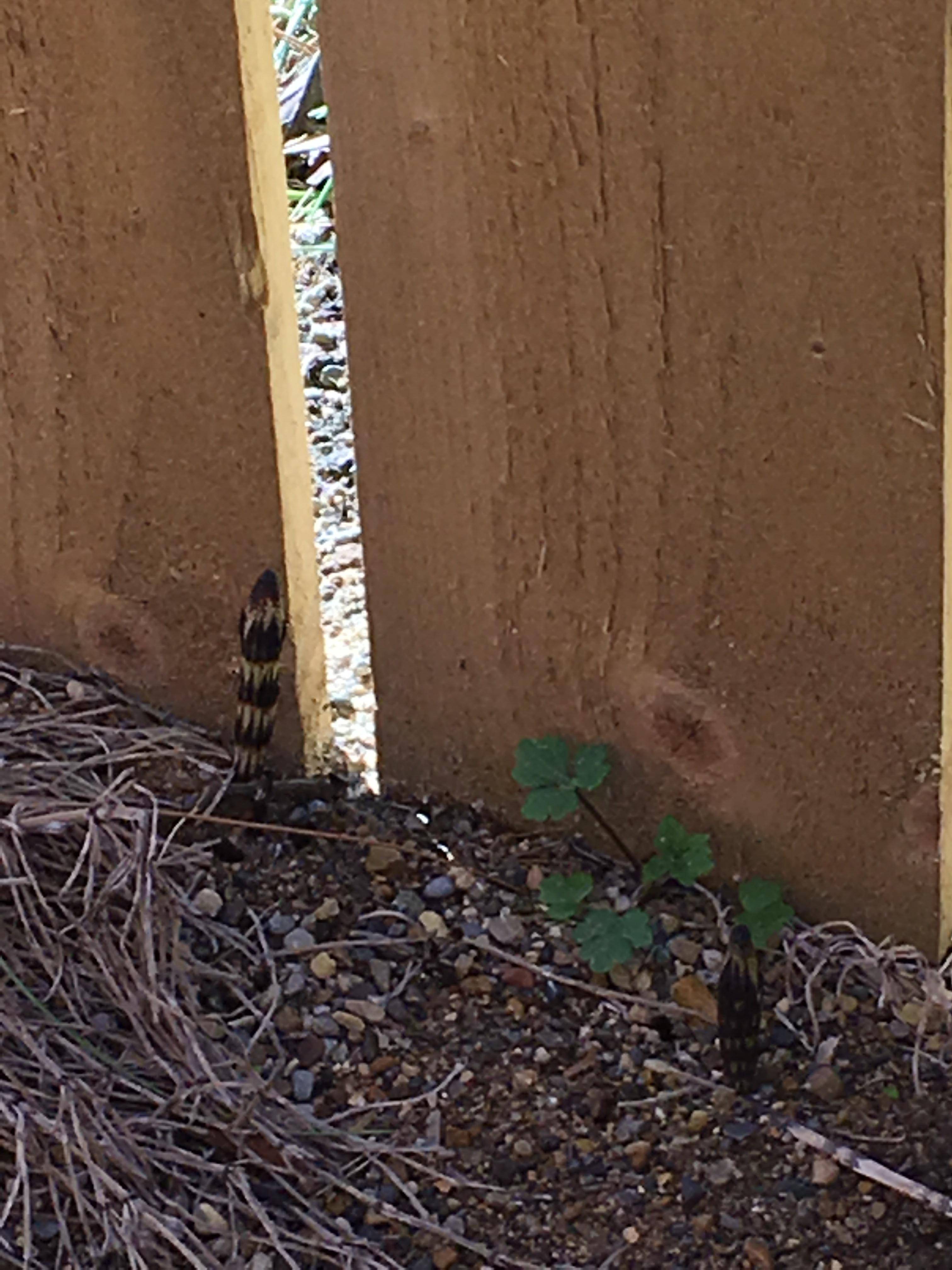 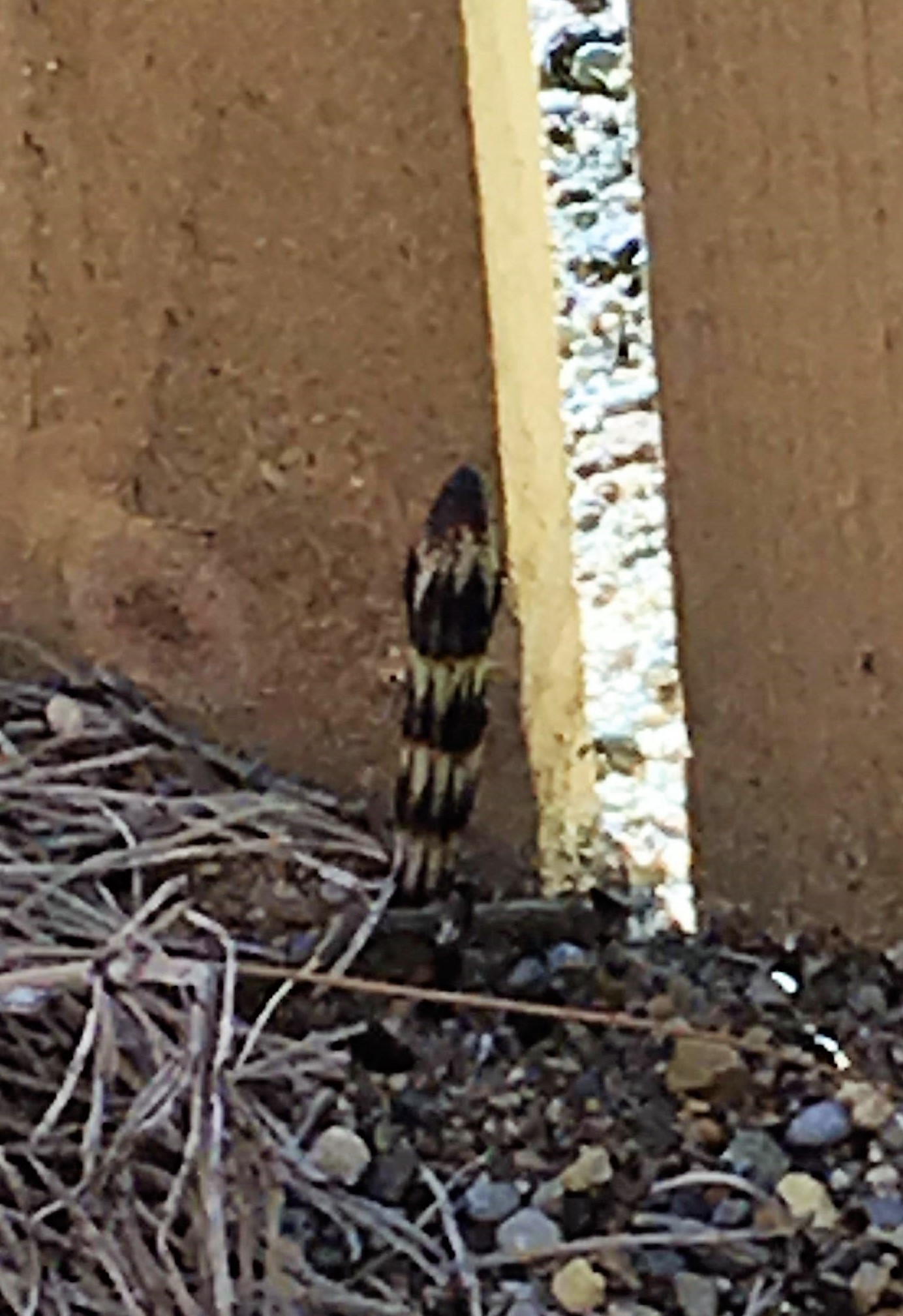 Well, at this stage, it looks like one of the Orobanche, or broomrape family (image of a more advanced one here http://www.markgtelfer.co.uk/beetles/salisbury-plain-again-broomrape-toadflax-and-ground-huggers/) the trouble is, its only March and these usually don't appear that early. A clearer photo might help, or take one as it advances so that it becomes more obvious as it develops. Orobanche generally a rare - they're parasitic plants, and grow very much in association with a host plant's roots, and the host varies depending on the variety of Orobanche; it may even be growing in association with a plant next door.

The other possibility is one of the Equisetum varieties, common name Horsetail, which I very much hope it isn't. One shoot is a bit unusual though, they usually start popping up over a broader area. Seeing what it looks like in a week or so would be very useful.

Following your comment that there are more shoots of this appearing, then it likely is Equisetum, probably Equisetum hyemale http://www.tastygardener.com/horsetail/. It usually retains stems above ground which may remain evergreen - it may be that someone's dug it out last year and these are new shoots for this year, but its proximity to the fence might suggest it's coming through from next door if you haven't noticed it before.

It is available for sale - people usually grow it in a pond or at pond margins, but it does need controlling to restrict its spread, because its pretty invasive. The extent to which it's spread will reveal itself over the next few weeks. It much prefers damp or wet soil conditions, so if your soil dries out pretty well in summer, particularly if you're in East Anglia, Essex or the South East, that will hopefully help control its spread

I think it is an Equisetum. And I'm not pessimistic as Bamboo. It could grow as single shot (or few shots), especially on first years. It is also edible. The only equisetum on my garden didn't last a mow of lawn.

I would remove it, but we are curious about what species it is. So in few months, could you check if you see larger plants near your home (e.g. other ivy or Galium for yellow Orobanche; or damp soil for Equisetum)

Looks like some species of Equisetum, most probably E. telmateia (the Great Horsetail) which is becoming more common in the UK. Futher details and images available on http://www.brc.ac.uk/plantatlas/plant/equisetum-telmateia. Equisetum are not flowering plants instead they are Pteridophytes - a group of vascular plants which also includes ferns. Like ferns they produce spores for reproduction and not seeds.

Orobanche are more delicate plants, quite rare in the UK and would tend to be found in close proximity to their hosts (they are parasitic). Equisetum are common and often problematic weeds, although I do have a soft spot for them - I like their prehistoric look. They will spread without control (root barriers are a must if growing ornamentally).

16
What is this potential lawn replacement plant?
3
What is this plant with variegated trifoliate leaves?
4
What is the plant with multiple lily-like yellow flowers with iris-plant-anatomy?
5
Houseplant with clustered red berries at the bottom part of the plant?
3
What plant does this seed pod shaped like a bulb with tendrils come from?
0
Identifying this unusual tree
5
What are these seed pods?
1
Identify this type of geranium
1
Is this plant with spikes of pale purple flowers creeping bellflower?
2
What is the name of this "zombie plant"?