Is there an easier way to aerate my compost besides turning it?

I want to be a good composter, but turning my pile is backbreaking work.

I was looking through a gardening magazine today and I saw a contraption that was basically a three foot long pole that had 6" arms that fold in along the side when pushing in, and then expanding out when you pulled it out. The idea is that you just plunge it in and pull it out a bunch of times and blammo - aeration. 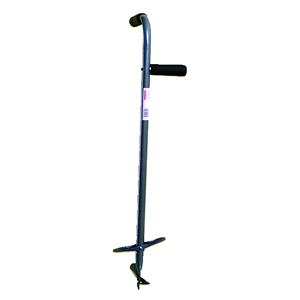 Do these types of things actually work, or do I just need to stop being lazy if I want to aerate my pile?

The point of aerating your pile is to get oxygen to the microbes that break down the organic matter.

I haven't used those compost aerators, but the theory seems sound -- it will "fluff" up the pile, undoing any compaction that has happened and letting the microbes breathe.

On the other hand, if you've already got a pitchfork and you're willing to do a little work, you may not need the aerator. When I'm feeling too lazy to turn the pile all the way, I just shove the fork in, lever it up and down, and work my way around the pile.

In terms of "an easier way": I've seen designs for bins/piles that incorporate perforated pipe into the bottom of the pile. Basically you run a piece of perf-pipe along the ground so that both ends stick out of the base of the pile, and a second pipe vertically, then build your compost pile on top of the bottom pipe and around the vertical pipe. The idea is that the pipes will carry air into the center of the pile. I've tried it and didn't see much benefit -- but I don't know if my execution was flawed or if the idea is flawed.

Another approach would be to layer a few long sticks horizontally across the pile as you build it up, crisscrossing the sticks as you build it. The idea is that instead of turning the pile, you can just grab the end of the sticks and jiggle them to fluff up the pile and get some air in.

And: it's not for everybody, but when my pile gets too big to turn by hand, I push it with the tractor. (You could also attack a big pile with a plow on the front of your truck...)

But: attacking a pile with a snowblower doesn't work very well. The compost is just too heavy and bogs down the machine too much, even at a slow speed. (It was an idea I had to try...)

It's also worth noting that turning the pile is an opportunity to add moisture. (My piles tend to dry out quickly.) When I turn the pile, I will often add water to the middle of the new pile about halfway through turning.

Lastly, if I'm really feeling lazy, I don't bother turning it at all. The pile will still break down, it will just take longer and/or the decomposition won't be as complete.

If you aren't already - use a fork, not a shovel. It's much easier. I use a D-handled gardening fork.

We have a 3-bin composter that I built about 25 years ago (with minor repairs since), using the very simple plans from Crockett's Victory Garden. Whenever I add anything, I add to the same bin, layering in about as much from another bin as I put in new. When that bin's full, I start on another - often needing to empty out what's left in it, either for use in the garden, or just tossing it on top of one of the other bins if it isn't ripe yet. So I don't turn it all at once, but it gets turned over time. This also allows me to balance out the green-brown (carbon-nitrogen) ratio over the year. We get lots of nitrogen-rich grass clippings in the spring, and carbon-rich leaves in the fall.

Another good thing about using bins, instead of just a pile, is that it gets a lot of the work up higher, so it isn't as hard on the back.

Our community garden has a compost crank and I swear by it. The crank is an auger design. You corkscrew it down in and then pull it up. It pulls a core of compost up to the top and you crank down again. The device you're showing there looks like it works on about the same principle, though perhaps with more movable parts to break down over time. Either way, you're pulling compost from the middle up and out to the top which is exactly what you want to achieve through aeration. 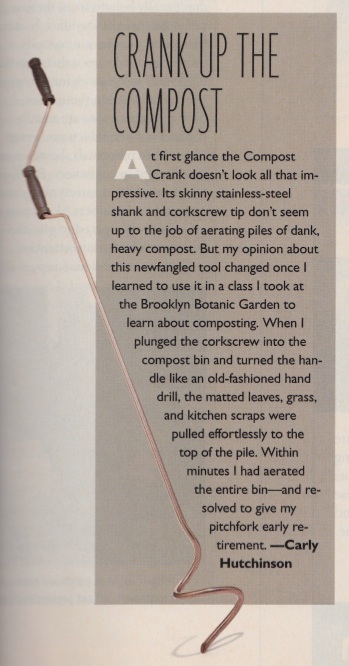 We also have a big tumbler (two actually, one that turns end over end and one like the one in @coomie's answer) and I find that we need to get in there and crank from time to time because the compost just turns into a big mass that sticks together as you turn and just drips in a big thunk. So it doesn't really aerate when you tumble it.

Compost gets heavy when it is wet and it is possible with the crank to turn it down so deep that you can't (I can't, anyhow) muscle it out. I deal with that by backing the crank out until I can pull it up, but that means you do want to make sure that the aerator you settle on is designed to stand up to use. It is tempting to think of compost as the light, damp stuff you get at the end, but midway through it can be pretty heavy.

PS. The picture is kind of silly, but it is the best shot of what the crank actually looks like that I could find.

Your pile will compost without turning it, but it goes faster if you turn it. A pitchfork and a little bit of work every few weeks or months will do just fine

It partially depends on what you are composting. If you are composting something like junk hay that is tough and stringy, Double winged compost aerators are hard to push into the pile, and the material comes up in a clump, tangled in the wings. also the wings may bend if you are composting something heavy. If you shred your material, this device works quite well. If you compost a variety of material types, it would normally end up taking less time just to use a pitchfork. Pitchforks are good for most home composting, but if you have too much material coming in and you don't have the equipment to stir it, consider multiple piles.

Gardening is such hard work. Just kidding. It's only hard for suckers that turn their own compost... Don't do that. There's a short cut, if you've got the coin.

It's called a rotating compost bin. 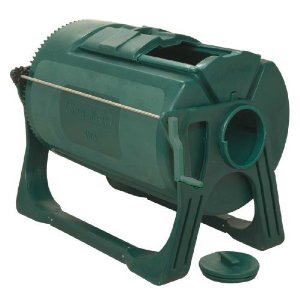 Compost goes in. A couple of weeks later, give it a turn or two and your aerating is done. How easy is that?

Now if you're really smart you'll figure out how to put wheels on it and you can throw away your wheelbarrow!

I considered the turners with the movable arms but moving parts tend to jam or break so ruled them out.

I was leaning toward the auger style turner described by Amanda, my only concern was that the grips you hold to turn them are quite close to the center shaft so I didn't think they would provide much leverage. I haven't used one though and since they drill into the compost there may not be much resistance anyway. The auger would have been my choice if I hadn't found ...

The hand cultivator. This is intended for soil cultivation but I found it works well for turning compost. It is about 3 feet long and the business end has 4 long spikes and 2 shorter ones. The other end has a wide T handle so you can get plenty of leverage when turning it. I use the "stab & twist" approach - stab into the compost then pull upward while giving the handle a bit of a twist. The twist causes it to grip a bundle of compost which gets pulled to the top, similar to the auger. If the compost is tightly packed you might have to repeat a few times to get depth - as you turn it the compost gets looser and you can stab deeper. If the compost is deep and tightly packed then the auger may be better, but for my purposes the cultivator does the job. It doesn't take much effort, and when you're not turning compost you can use it for cultivating the garden. 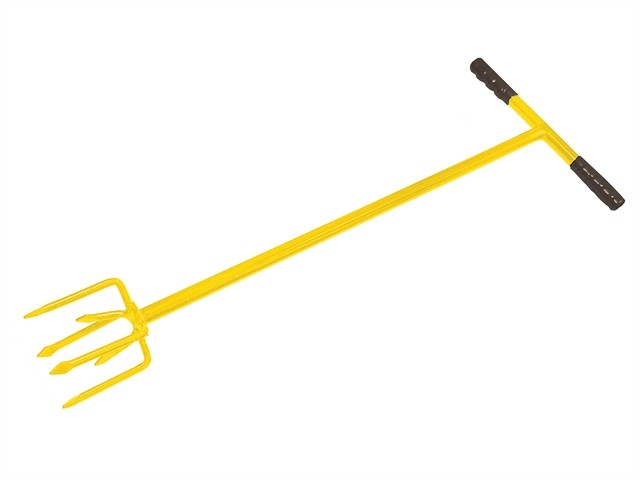 The compost stirrer you show a picture of is actually intended for use in plastic compost bins, with a lid, rather than an open heap on the ground. I bought one and I can't say I was that impressed - seemed a bit short for one thing.

The best solution I have found is.... an ice auger! Not a hand-cranked one and nt a gas powered one, one that used an 18v electric drill. Look for the Clam auger plate, Home Depot sells them online.

I use a GeoBin composter and have a somewhat similar device to aerate the pile. It works well for a contained bin like I have but I still turn the pile once or twice by lifting up the composter and moving the contents into it's new location, turning the pile inside out in the process. You can read more details on my post about how to turn compost in a GeoBin.

You can do something similar if you can remove your compost enclosure or if you're just using piles.

It's best if you can have the pile aerate itself and then just manually aerate it from time to time. You can do this by placing large, bulky items in the bottom like thick branches or rocks. They won't compost completely but they allow air to come in the bottom through the sides and rise up through the pile. A perforated pipe sticking up in the center helps too.

33
How long does it take for the compost to ripen?

18
Is there any reason not to add commercially produced flowers to compost?
9
Is there a way to compost these spruce needles?
10
Compost Bin Full - Turning vs. Layer of Browns on Top
1
Is there a way to make "swamp coffee" with kitchen waste?
2
What is the proper way to inoculate a compost pile with things you can find in the woods?
8
Is it safe if there is a small amount of rubbish/debris in the compost?
9
What is the best way to compost a large pile of leaves with minimal effort?
4
Suggestion for cheap and efficient way to shred compost ingredient?
11
Would turning the compost actually slow down compost decomposition?
16
Is there a way to avoid the recurring cost of microbes when composting at home?