What will produce the most tomatoes with multiple seedlings?

When planting tomato seedlings (purchased in 4" pots), I often have 2 or 3 plants per pot and sometimes the seedlings are very close together. These plants will be transplanted into 4 18" pots. My question is: For total poundage production, is it better to transplant the 4" as is, break apart the seedlings and plant 2 (or more) in each pot, or thin and only use one plant per big pot?

I do worry that separating plants this close together will cause distress or death of one or both.

Additional information: Zone 13(Sunset Guide)/Zone 9(USDA), plant in February to early March for fruit in May and June, I do not try to keep plants going through the summer, it's just too brutal. 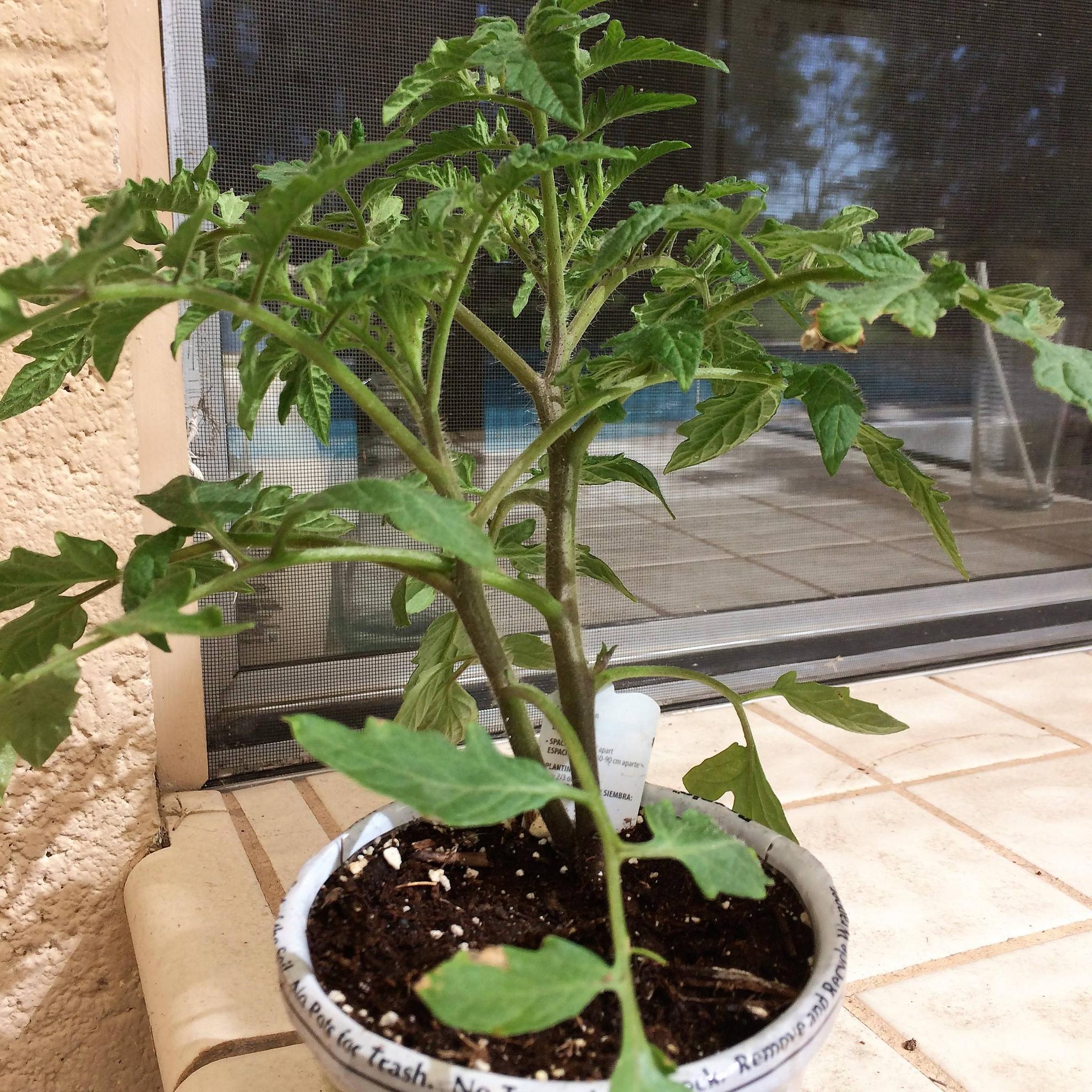 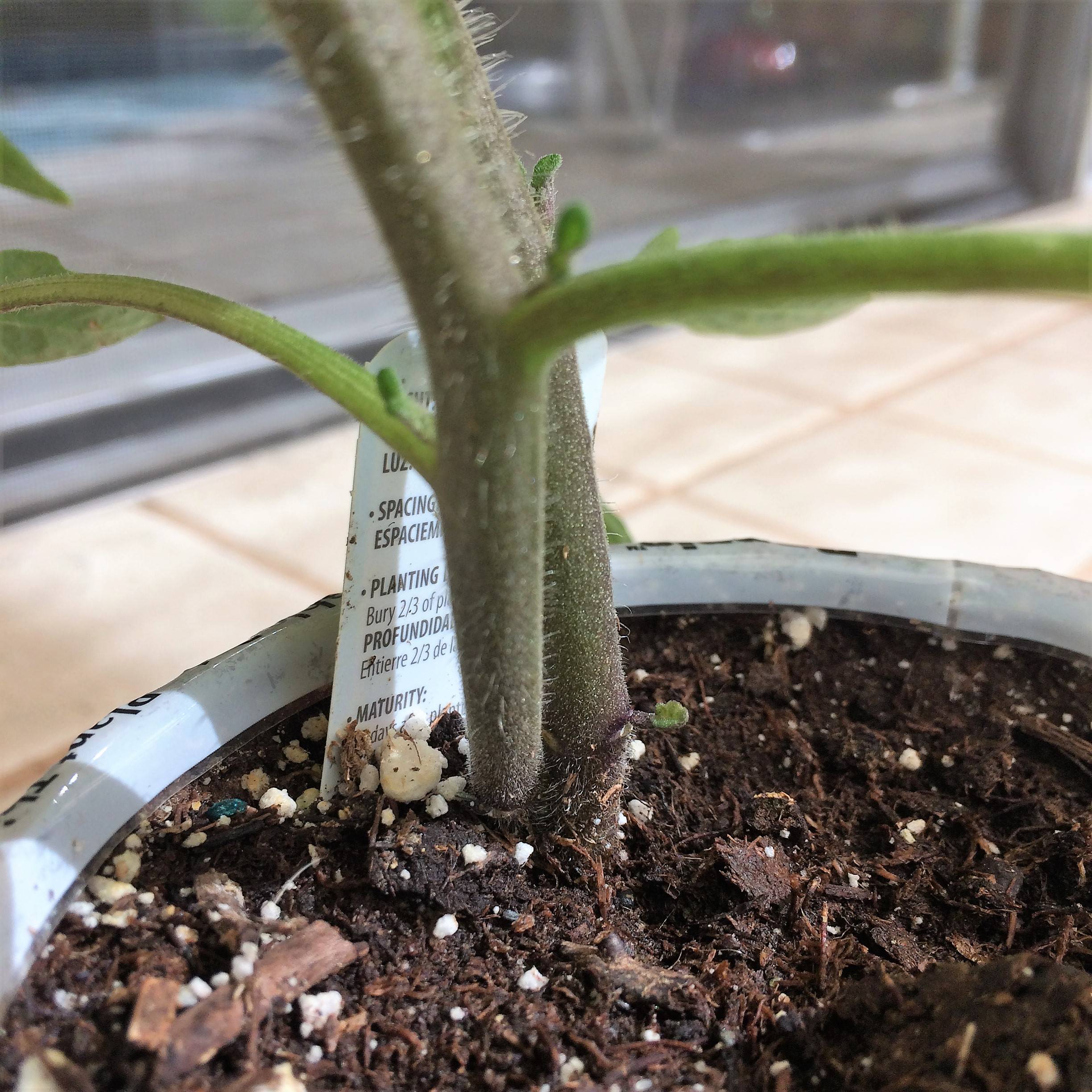 Normally in such a situation, if I were faced with this issue, I would split them.The fact is that tomatoes make roots very fast and given the right growing conditions would quickly recover from being split. I would take a sharp knife and insert it between the seedlings and cut down through the roots with a slight sawing motion to disturb the roots as little as possible, then replant the two halves in new potting soil deeply so that the top growth of each one is buried to about half its height. It will quickly make roots along the buried part of the stem.

However you mention that a hot season is approaching; it will take about a week for the two separated halves to get back to full speed, which might be a significant stop for them. In that case I would plant as is and train the two shoots into a V shape, 60 degrees to the horizontal to give maximum light to the two sides and give close attention to adequate water and nutrition.

If you have several pots, divide into two groups, split half and leave the others intact. Then you are covered in case the hot weather is slightly delayed.

From my observations and experience, most of the time you can expect smaller fruits and less production from two all-season tomato plants in the same location in the ground than you can from one tomato plant by itself.

I'm not sure if the answer is the same for tomatoes that are kept in containers as their final destination. I'm also not sure about determinate tomatoes that only fruit once and die. How you fertilize might also affect the answer. (My experience is without much fertilization.)

Anyway, it's possible that the variety is one that does well with two plants in the same spot, especially since you purchased the plants this way. Vendors seem to do things the way they do them for a good reason, usually. Asking the vendor their reasoning may be a good idea. You might email or call the company. I'm not sure that a customer service representative will know their methodology, though.

FYI: I have a hypothesis that tomatoes can be acclimatized over the generations to producing better with two or more plants in the same spot. I'm in the process of testing it with Pruden's Purple.

FYI: Watermelons and muskmelons rarely seem to be bothered by having multiple plants in the same spot (I think there are some varieties that aren't used to it, though). So, what's true for one species may not be true for another.

I wonder if your plants are indeed two separate plants or not (maybe they're just the same plant buried deeper).

Anyway, doing one plant per pot is probably the best idea, unless there's something special about the tomatoes. I would only be very concerned about dividing the roots up if soil diseases are a significant problem in your area or if they're in your soil.

If you want to divide the roots up, you can take the plants out, massage the soil to loosen it, and carefully pull the two plants' roots apart (gently pull a little and stop and pull a little and stop, until they come apart). They can sometimes come apart without much, if any, ripping, that way. Just cutting them should be fine though. Then transplant them into their own pots.

I wouldn't disturb the roots if you're not going to give them their own pots, though. I would just keep them as is and put them in the bigger pot.

If you don't want to disturb the roots, and you don't want two plants in one pot, then you could always cull one plant. However, I don't recommend that, as it's a waste of a good plant. What you can do instead is get some scissors and cut one plant off just below the soil level (so you get some roots on it, but you don't disturb the roots of the other plant at all). Even one root makes a big difference (although it's not hard to root cuttings from scratch). Then you can transplant the plant you cut off, and have an undisturbed plant, too.

Tomatoes aren't as bothered by disturbed roots as many other plants are. Just make sure it's not super sunny while you're doing it. Sun can wither, stunt and/or kill plants with disturbed roots.

Keep nitrogen fertilizer away from recovering plants until they've fully recovered. Excess nitrogen increases the symptoms of transplant shock, and it's not good for the roots.

Consider you may be looking at two suckers (actual name) from the same root ball, if they're growing right next to rack other.

I wouldn't break apart the root ball at all. The primary benefit to buying peat potted tomato plants in Spring is the healthy, perlite-heavy root ball.

If there's a straggler distant from the main shoot(s), pull it. Otherwise, bury the plant almost completely in its new pot and prune accordingly later.

Such a wonderful environment for tomatoes. I'd plant the paired tomatoes together in their new pot. Going from 4" to 18" pots isn't a good idea. I'd go to 6" pots, then 10" and then to 18" adding new potting soil each transplant or 'uppotting'. Tomatoes are very sensitive to too much soil in their pots...not enough root mass to suck up the water. Make sure you use sterilized potting soil when planting in pots or containers. Especially Tomatoes, eggplant, potatoes and peppers. Just one errant spore of late blight will kill your entire crop. It is a very disheartening ordeal. Never use anything that you know not where it is from or if it has been tested. I'd use Osmocote 14-14-14 if you've no experience with fertilizing. Don't be afraid to remove leaves that aren't getting sun and when too many leaves get congested enough to inhibit air flow. Always use scissors or pruners cleaned with alcohol. Keep your smoking friends AWAY from your plants!! No touching at all by smokers. Mosaic virus from tobacco is a big big deal. Water deeply and allow to dry out before watering again. Fertilizing with Osmocote will be a one time thing. Too much nitrogen, you will not get tomatoes or reproductive growth, just lots of leaves. Pots have to have drainage holes, bottom of pot lifted from surface and no gravel/rock/pebbles or packing peanuts below the soil and bottom of pot!! I always use fans for the best protection from fungus. Are your tomatoes determinate (bush) or indeterminate (vine)? What variety? Are they non-GMO? I am sure you'll have more questions other than separating starts grown in some nursery and sold in some store! Tomatoes are one of the most important crops individuals can learn to grow...and preserve (drying is best, my opinion).

Not the answer you're looking for? Browse other questions tagged tomatoes transplanting or ask your own question.

31
How should I prune my vine tomatoes?

12
Why shouldn't I water a Blue Spruce tree during and after transplanting it?
4
What is the best way to pick tomatoes?
5
Will tomatoes on the vine ripen without direct light?
11
Plant recommendation for gift for kindergarten students
2
What's wrong with my tomatoes?
5
Do tomatoes produce seeds that are true to the parent plant's characteristics?
0
How Can I Make Sure These Gerkins will Produce Fruits?
2
Having Various Issues With Multiple Tomato Plants
2
Are mature store-bought veggie plants like these intended to stay in their pots?
5
Why are the leaves of transplanted tomato seedlings curling upwards?