How do I dig up or get rid of bushes?

I've got several large bushes I am trying to get rid of in my yard. I started by cutting them down close to the ground, and then tried to kill the root stump with root killer (copper sulfate pentahydrate). However, a few weeks later, instead of everything having died, new shoots are starting to grow!

So I tried digging a hole around a couple of these plants to get at the root bulb, but one of them appears to have a rather large root (2-3 inches in diameter) which goes straight down and then grows under a patio slab. I think if I had some kind of tool that I could stick in the hole and cut through the root that might do it, but I don't have such a tool and don't know what kind of tool I am looking for.

The other one I have tried is very difficult to dig around because the soil is full of rocks and roots from the bush. I cannot use a shovel, because it hits both of these. I have tried using a hoe or other similar digging tool to dig around but it is very slow and tiring and at the rate I am going I estimate would probably take at least 30 hours to finish, which at about one hour a week until I am worn out digging would take me months to finish.

Is there some kind of tool that I can use to effectively dig up or cut out the root ball? Some other method I am missing? I'm sure I could just call a landscaper and pay them a lot of money, but I would like to do it myself if possible. What would they know that I don't?

Update: Well it was hard to pick from all the answers to choose an accepted one, but the answer suggesting the cutting mattock was the most help, and I found I already had one of those! For the bush that was accessible I basically just chopped like crazy in a circle around the root ball until it was loose enough to pry from side to side to finish the job. The mattock basically just pushed the rocks out of the way as it hit them. Along the way I also used a pruner to snip at the thinner roots that were exposed to conserve my swinging strength.

For the bushes against the slab I did not have room to swing the mattock, so I actually used a regular drill with a fresh 1/4" bit. First I drilled straight through the center of the root as far below the ball as I could access, then I drilled diagonally in through the same hole around 45 degrees on either side, then continued drilling at angles in between, and then into the same plane from a different angle outside the root. When I had done this enough I was able to just snap the root in half and the ball came right out.

Stormy must be asleep. The first thing (too late for you now): see if a landscaper would have come and removed the uncut, unpoisoned bush for the sake of getting the bush and selling it to another customer. A Stormy stock theme. They might even have filled the hole.

You get worn out - well, keep at it and you'll get into better shape. Give up and you won't.

Tool of choice - a mattock - A "cutter mattock" not a "pick mattock" - you'll need to sharpen that from time to time - no way to stay sharp when dealing with rocks, but it needs to be sharp to cut roots effectively. 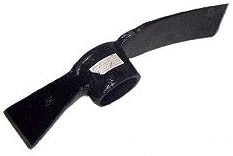 You might also want a pick or a pick-mattock.

Alternate tool of choice - an excavator. They can be rented, or you hire someone who has one and knows how to use it. 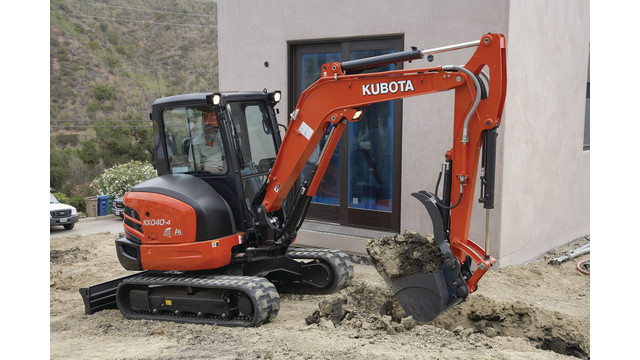 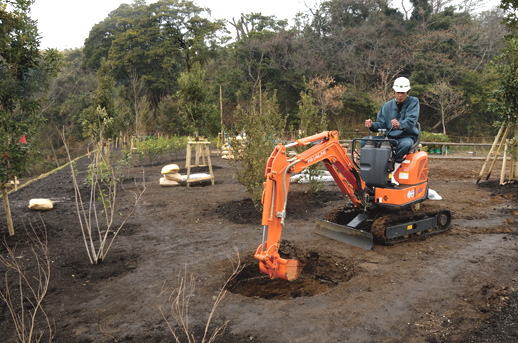 Don't forget to call dig-safe or the local equivalent to mark services before you dig. Cutting gas or electrical lines is dangerous and expensive whether you do it with power tools or hand tools. Cutting telephone lines and fiber optic lines is not as hazardous, but can be incredibly expensive.

You never cut a tree that you are trying to remove down to the base.
Remember that part for the future.
Tools I use (and all of them in the process) •Spade/square mouth sharp flat head short shaft 'D' •Lopper/ •Axe/ •Hand held pruning saw 9"blade •Secateurs •Pry bar •Grub hoe/with pick end •-round mouth shovel/ pointed head end/ long straight handle •Rake •Tarp •Wheelbarrow I know it sounds like a lot of tools, and tools are expensive to buy. (Rough guess $500.plus Canadian dollars) This is just the kind of jobs where tools used wrongly get busted too. The price of a stump grinder and the knowledge of safely operating one also comes at a price. You might want to identify what type of shrub you are trying to get rid of before contemplating pesticides. It's a crappy digging job that may as well have a thourough and positive end result if you want to accomplish this without a professional landscaper. We usually have done it before and know a few things that make this kind of work appear like less effort. It's not.
A big rock is also really beneficial. It helps drive the pry bar. Cheers Mate! Once you get a handle on it .... smooth sailing and physically satisfying. You gotta be in shape for this stuff. Consider it free enrolment to a gym.

You either need to reapply a stump killer, or have the stumps ground out; another factor to consider when using stump killers is the variety of shrub you want to remove, because some have suckering roots (Lilac for instance) so sometimes, suckers continue to grow a distance away off major roots beneath the soil. You should be able to find someone to come with a stump grinder to do this for you, but costs will vary between companies. You could check out hiring a stump grinding machine and doing it yourself, but it isn't the easiest job to do and hired machinery is often not the sharpest; stumps should be ground out to at least a foot below ground, including major roots in the vicinity where possible.

Most stump killing chemicals work best if you drill holes into the stump and apply the killer to the holes, but recommendations vary according to the product chosen. I'm assuming you're not in the UK, or I'd have recommended SBK brushwood killer, but I don't believe its available in USA. More information on stump killers and stump removal companies here - it talks about trees, but stumps of shrubs get the same treatment.

I second all the other ideas too. My go to tool for medium sized shrubs is a cutting mattock, which is essentially an axe on one side and a mattock on the other. That's great for roots on the surface. When you get through some of the top roots I look for my digging bar. Also called a rock bar, tamping bar etc. It's a long steel rod that has a blade on one end and a small tamping surface on the other. It's like 7' long and weighs about 20 pounds so you just lift it up and guide it and its weight propels it through some big ole gnarly roots. I use my belt sander to get my digging bar deadly sharp if I know I'm gonna tango with some roots later. Works like a charm.

Another method I use has been very successful for me is using a high lift off road vehicle jack. Here is a video that shows the same setup I have.

These things can pull on the root system with thousands of pounds of force. I think buying this tool is only really worth it if you have a lot of shrubs to remove. I know it has saved my back numerous times!

Not the answer you're looking for? Browse other questions tagged shrubs digging or ask your own question.

2
How deep should the soil be above a new retaining wall to allow shrubs to grow?
3
Why did a section of leaves on my Holly bush turn brown?
6
How should I treat a weigela bush with a large section of dead branches?
15
Need help identificating this bee-attracting shrub
6
What is this extremely drought-tolerant bush with yellow flowers?
4
How much water does a Common Boobialla cutting need?
4
Why does my Black Currant bush have shriveling/drying leaves and fruit?
5
Is the rapid new growth on this rose bush a sign of Rosette?
4
Efficient potato digging