Why is my Chrysanthemum dying?

I have noticed that my Chrysanthemums are dying one after the other. I don't think I am over or under watering, as the remaining plants are showing good health. 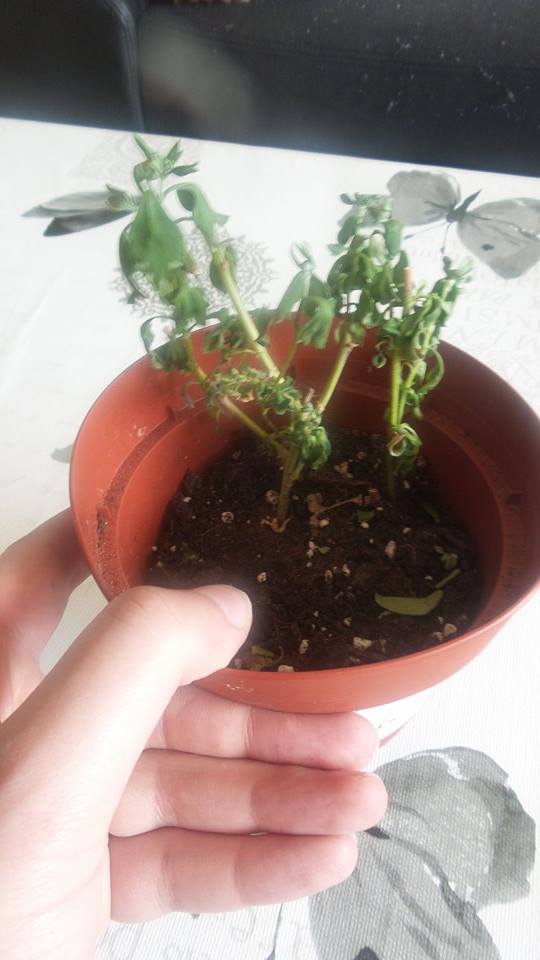 I don't notice any brown or dead leaves either!

Chrysanthemums naturally die back below ground in winter in temperate regions and start growing again when spring arrives, so your keeping them indoors has interrupted that natural process. I asked whether they were cuttings, because there are two separate stems in the pot in the photograph, and I don't know why - it might mean two separate plants or two separate cuttings.

As it's now almost March, try turning the sickly ones of out of their pots, and if there are two plants, separating them, and potting them up in fresh potting compost, cut them back to just above soil level and put them somewhere bright to (hopefully) start them back into growth. It's impossible to tell from the picture (it doesn't get any clearer when magnified) whether there is a problem with aphids such as whitefly, but the curling of the leaves might indicate an infestation of some kind, so inspect the plant/s closely for signs of insect problems.

These plants were outdoor plants. They were suddenly taken indoors without being allowed to be 'hardened' off going from outside to inside. Hardening off a plant whether from inside to be able to live outside or the reverse is critical. Just bringing a plant from your balcony that were used to the out of doors (and pretty much thinking about going dormant) to suddenly live indoors will kill a plant. Or make them struggle to survive.

I'd cut them back (allowing 3 or 4" of stem), leave them where they are (is that potting soil, sterilized bagged soil?). A cooler environment would be best with light from the sun available. Careful with direct sun through your window. I wouldn't use compost for a medium as you won't know the amount of decomposition and it certainly won't be sterilized. Do not give any fertilizer.

You are essentially putting your mum starts into a forced dormancy. In the spring, if the stems are still green you can then begin to harden off to the out of doors. Do not fertilize until you've got lots of growth beginning. Even then use an extended release fertilizer such as Osmocote 14-14-14.

Make sure there are no rocks or gravel below the soil in your pots. Just soil above the drainage hole. Water infrequently keeping the soil on the dry side. Also, you should fill your pot with soil and allow only 1" below the rim. This will give your plants more light for the lower leaves and room for watering. Raise bottom of pot off surface with tiles or rocks.

Leaving them outside till December probably didn't harm them (unless the weather is really harsh in your part of Germany), but after that you (or your father) did everything wrong.

The right way to keep chrysanthemums over winter is to cut them down to about 8 inches (200mm) above the roots after they have finished flowering. If the outside temperature is expected to stay above -5C all winter, leave them in the ground or outside in their pots, and protect them by covering the soil with bark chips, etc.

If the climate is colder than that, dig up the plants and shake off as much of the soil from the roots as possible. Then remove all the remaining green leaves etc, and cut the stems back to about 3 inches (80mm).

Label the plants, because they will now all look the same!!!

Put a 2-inch (50mm) layer of general purpose potting compost in a tray, stand the roots on top of that layer, and cover the roots with another thin layer of compost.

Keep them cool (ideally below about 5C) but frost free through the winter. In January, bring them into slightly warmer temperature (5C to 10C) and water them a little as they start to grow again.

Take cuttings from the new shoots, about 3 or 4 weeks after they have started to grow again. You want them to start growing slowly in cold conditions - don't try to speed up the process!

Not the answer you're looking for? Browse other questions tagged diagnosis flowers or ask your own question.

2
Are my Salvia flowers dying?
8
Why are my lilacs dying and what can I do about it?
3
Why are my tree ferns' leaves drying out and dying?
3
Why did a section of leaves on my Holly bush turn brown?
4
Why is my Peace lily dying?
3
Peace lily dying. Please help!
4
Why are the leaves dying on my Ctenanthe?
3
Chrysanthemum flowers and buds turning brown and dying, leaves wilting and getting brown spots
0
Save a dying rose plant
0
Coreopsis seems to have suddenly died in the last month