I purchased an Euphorbia from IKEA last October. It was very robust in the beginning, but after being repotted multiple times it lost a lot of its vigour and some parts of died. I'm looking to understand what I did wrong so that I can prevent this in the future.

I didn't water this plant for the first three months I had it, from October to January. Here's a rundown of its history (pictures included below):

The first two times I repotted the plant I was a bit careless and probably hurt the stems or the roots it by letting the plants hit each other or hang badly.

The leading theories I have about what could've caused the rot are:

Picture time! Here's how the plant looked when I had just purchased it: 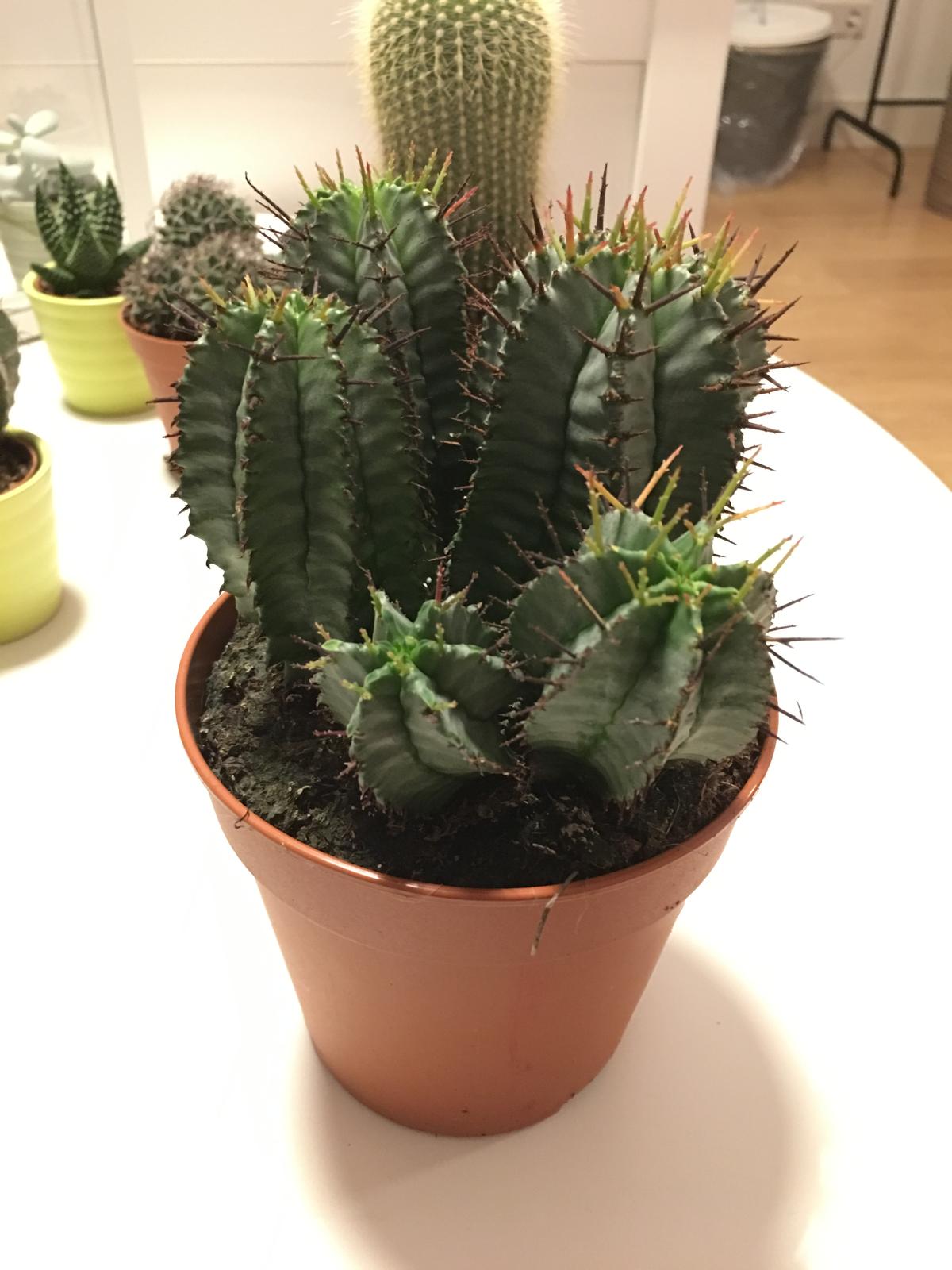 Here's how it looked after the repotting on November 20. 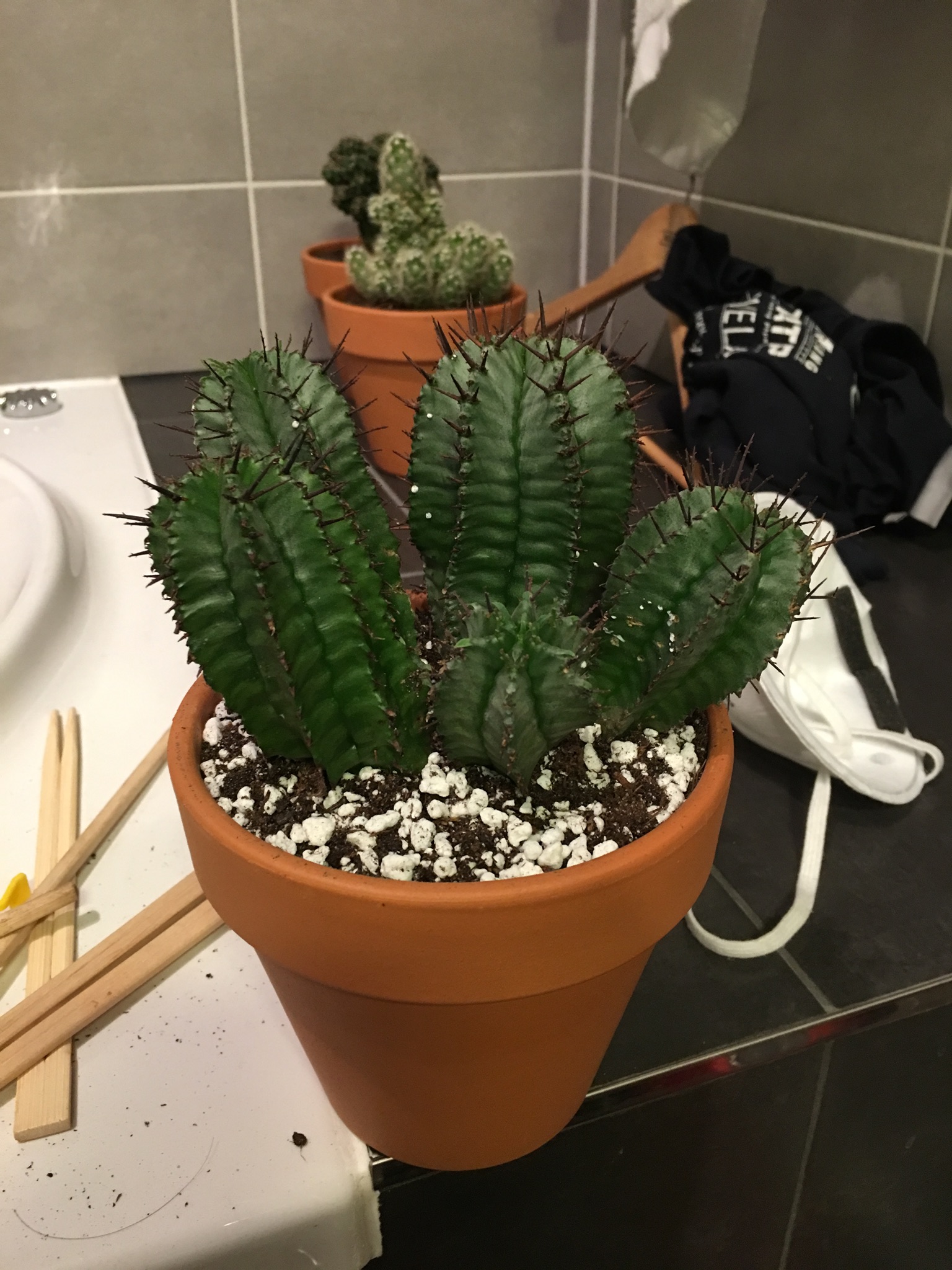 Here's the first stem that rotted and what it looked like when I inspected it (I later on found out you should never touch Euphorbias with bare hands 😅): 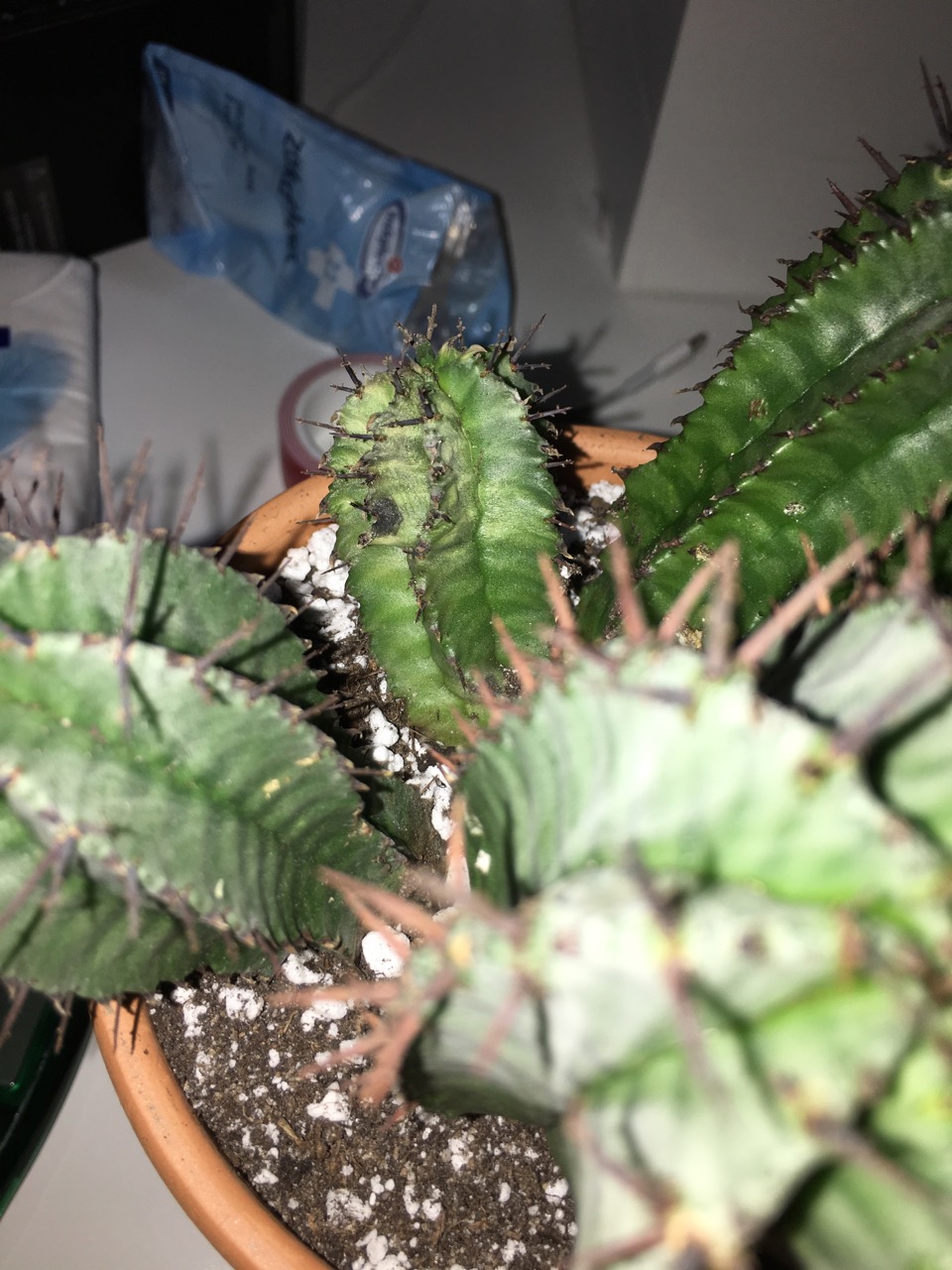 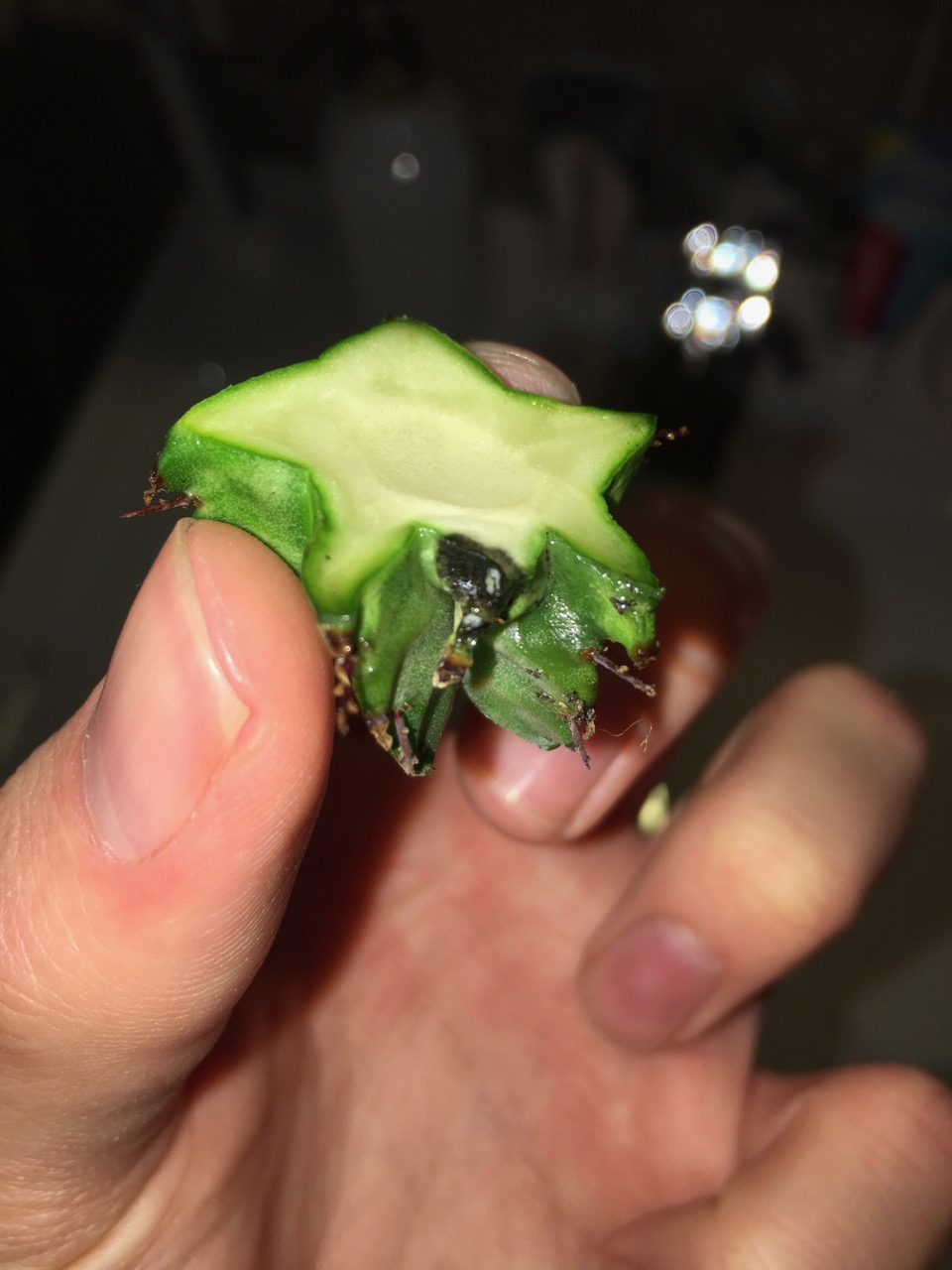 The arm that rotted on January 10 looked like this: 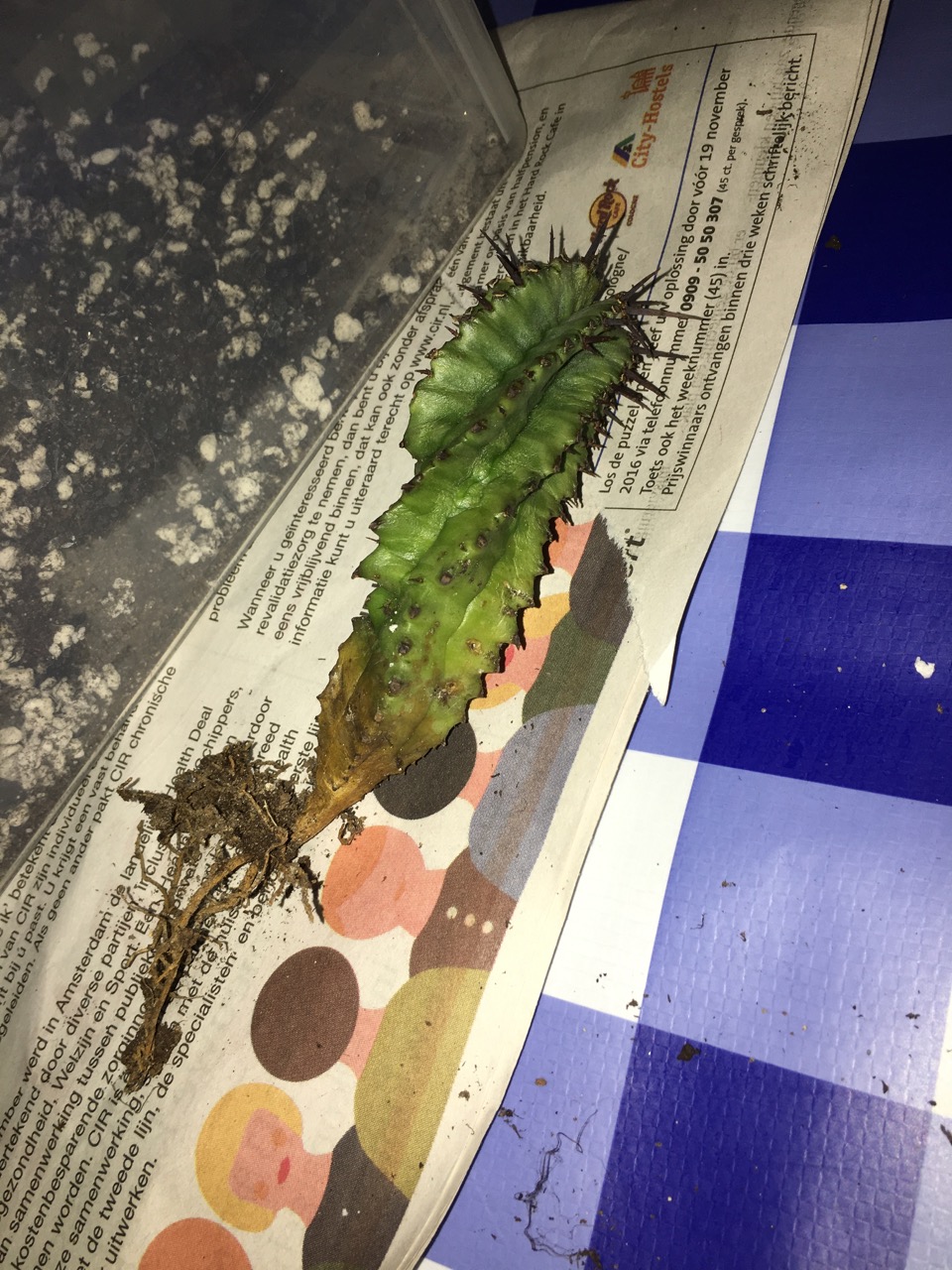 The third arm to rot, today: 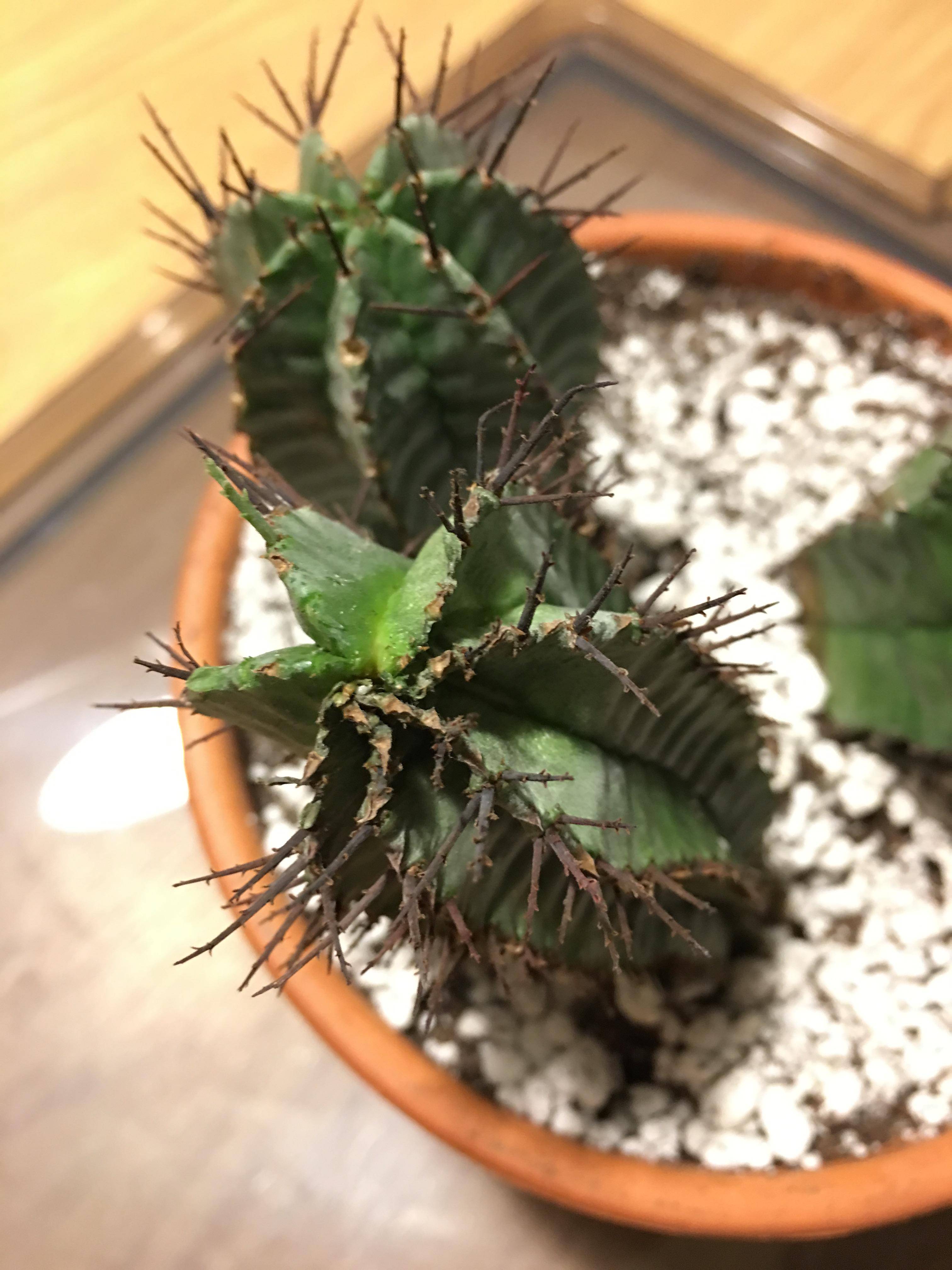 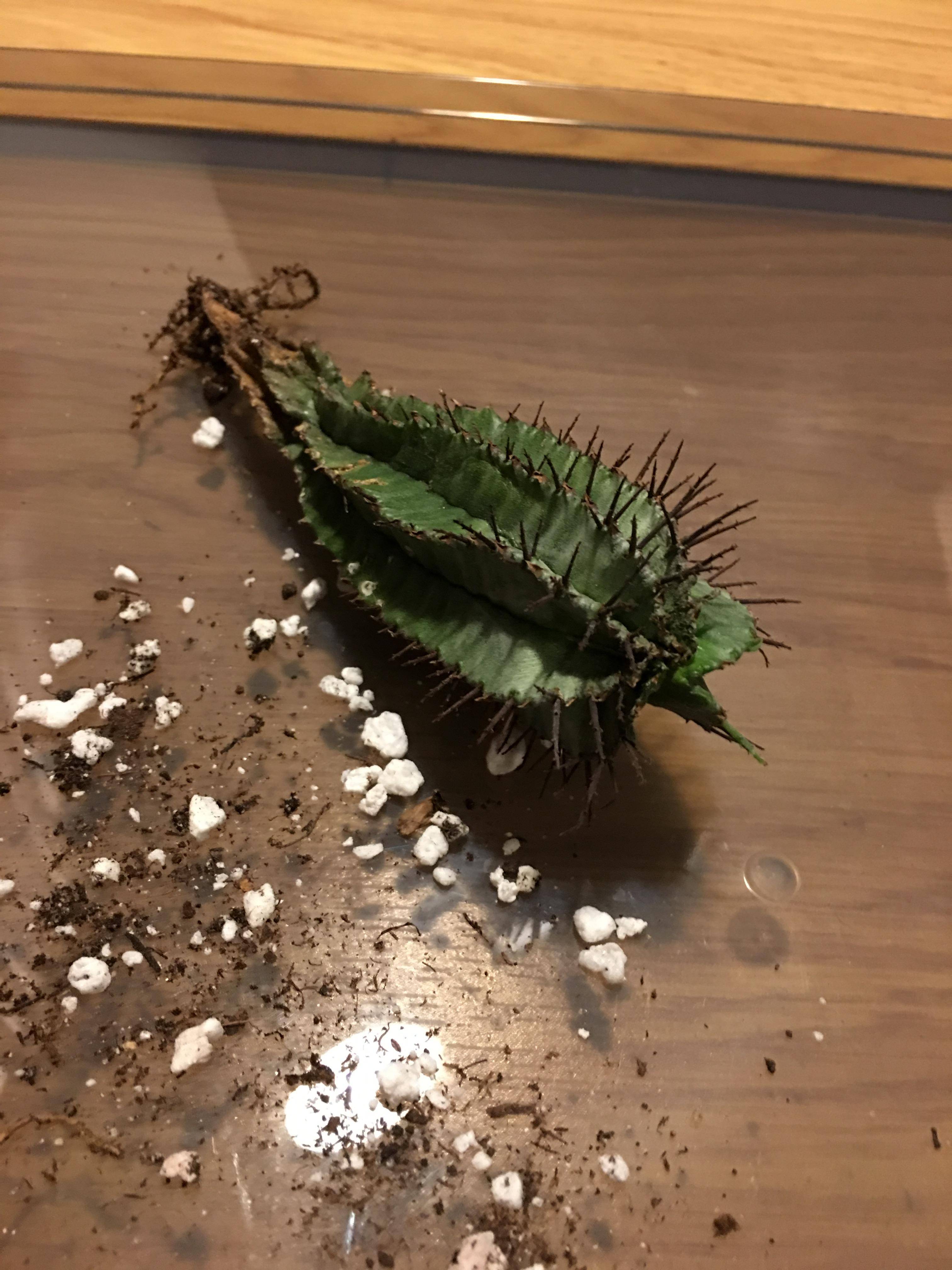 It looks to me as if, originally, it was planted just a bit too deep, and when you 'sloppily' repotted it, and subsequently, you planted it at the same or even a fractionally deeper level. In both 'arms' that have rotted, its apparent that some of the ridged growths were below soil level, and that's where the rot started, probably caused by damp soil sitting against the base of the stems.

When plants are presented for sale, they have often just been repotted, or, more usually, the soil at the top of the pot has been topped up with new to make the plant look more appealing or to give more support to splaying stems, but this often means the soil level is higher than it should be, even if that's only by a couple of millimetres. With many plants, it doesn't matter too much, but with a succulent, it does. It needed to be potted a bit lower, and if you needed to support the topgrowth at the base to prevent it splaying out, a layer of fine shingle or small pebbles would have done the job without retaining water against the plant stems. The trouble is, the poor thing's been disturbed so many times, it may not survive at all, and may not respond well to being turfed out of its pot yet again and repotted, but you can try if you want.

This answer assumes you're obeying the usual rule of never leaving the plant sitting in water in an outer pot for longer than 30 minutes max.

Not the answer you're looking for? Browse other questions tagged soil repotting rot euphorbia or ask your own question.

6
Leaving succulents in the sun for 2 weeks without watering

4
Question Repotting Sansevieria (Mother-In-Law's Tounge)
8
Should I fertilize a cactus showing etiolation?
4
Opuntia is slouching after repotting
4
What is this Euphorbia succulent?
3
Why are my Golden Empire Bidens dying?
1
rescue for a rotting euphorbia
0
Succulent in need of repotting
3
Indoor Yucca is dying after cut/repot