Can I grow a fall-winter flowering witch hazel bush in Zone 6?

I live in Massachusetts, Northeast United States, Zone 6. The lowest temperature in our coldest months can go down to -10°F (-23°C), although it's usually a bit warmer.

While reading an article about local shrubs, I found mention of a witch hazel bush. Apparently it thrives well under the same soil and weather conditions as lilacs, pussy willows, and forsythias, all of which I have. What intrigued me most was that these bloom in the fall and winter, long after everything else has gone by.

Having never heard of one, I searched and found that the witch hazel genus, Hamamelis, includes a number of varieties, four of which are common in North America.

Out of those, Hamamelis virginiana seems to be my best option. According to the Arbor Day Foundation, and Missouri Botanical Garden, it's native to Eastern United States, and hardy in Zones 3-8. It has yellow blooms from October through December.

I'd really love to have a flowering bush that late in the year. However, before getting one, I just want to make sure that it's likely to grow here, and that it actually does bloom in those months.

Also, what is the proper way to spell that plant? I've seen it as witch hazel, witchhazel, and witch-hazel. 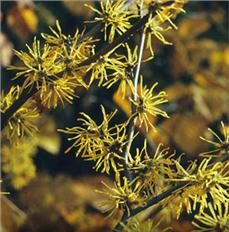 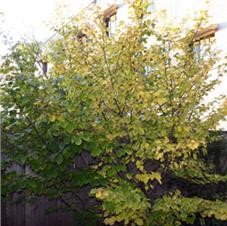 Should be fine where you are, provided you don't plant it somewhere that dries out frequently. It likes reasonably moist, well drained soil, and tends to flower better in sun than shade. Flowering is variable between October and December - some years you might find it flowers just before leaf fall, and other years, after all the leaves have gone. The flowers are more noticeable if all the leaves have already fallen, but as already stated, that's variable. More images, including a somewhat more realistic one of the plant in flower, along with further information for your area here http://plants.stonegategardens.com/12130006/Plant/199/Common_Witchhazel The flowers are fragrant, but when the weather is very cold, you'll probably find you need to be really close to detect any aroma.

It doesn't matter how you spell witch hazel, it's only a common name anyway, so any spelling is acceptable, and likely varies from region to region and country to country.

Unless you specifically want a native plant, you might like to consider Heptacodium miconioides before making your choice; it has fragrant white flowers from late summer into fall, followed by deep pink seed capsules throughout fall, and has interesting bark too, see here http://plants.westonnurseries.com/12130019/Plant/1783/Seven-Son_Flower

As general way to get an answer (but not really an answer).

Botanical gardens or some good public gardens can give you a lot of ideas. Usually they have also some flowers for winter, and usually also a some local flowers, so you can check and see what are the most beautiful ones, which can grow in your garden. Additionally, you can ask the gardeners for help and tricks. Note: because winter has very low public, the botanical garden employees are much more welcoming (and less stressed to vandalism (uncontrolled collection of the best flowers). On working days it is also much better.

Not the answer you're looking for? Browse other questions tagged shrubs flowering cold-weather or ask your own question.

11
What are some small deciduous shrubs that can grow in USDA zone 4?
12
What causes flowers to fall off of a blueberry bush?
3
Why is my Mulberry bush flowering later than all my other trees?
4
Why is my Sunshine Blue blueberry bush flowering in the fall?
3
How can I discourage my chives from flowering?
6
How should I treat a weigela bush with a large section of dead branches?
6
How do you grow a plant not in your hardiness zone?
4
Can you identify this shrub which I have named "The Redemption Bush?"
2
What flowering tree is this and how can I grow it?
1
Need help identifying this yellow-flowering shrub/bush