Location is Portland, OR area.

My new (to me; built 1972) house came with a 10 ft tall Japanese Maple in the front yard. I don't know when the tree was planted but it has suffered through the years from neglect and rather heavy-handed (ahem) "pruning". The lack of skill is evident even to my inexperienced eye.

The tree is on the North side of the house. During the summer it gets several hours of sun but in the winter only the very top ever sees the sun, and only for an hour or two on sunny days.

I just spent a couple of meditative hours getting familiar with the tree's shape and structure, removing dead wood, and manually picking off a large amount of moss of varying species. I have two concerns (photos after the text).

A couple of overall shots 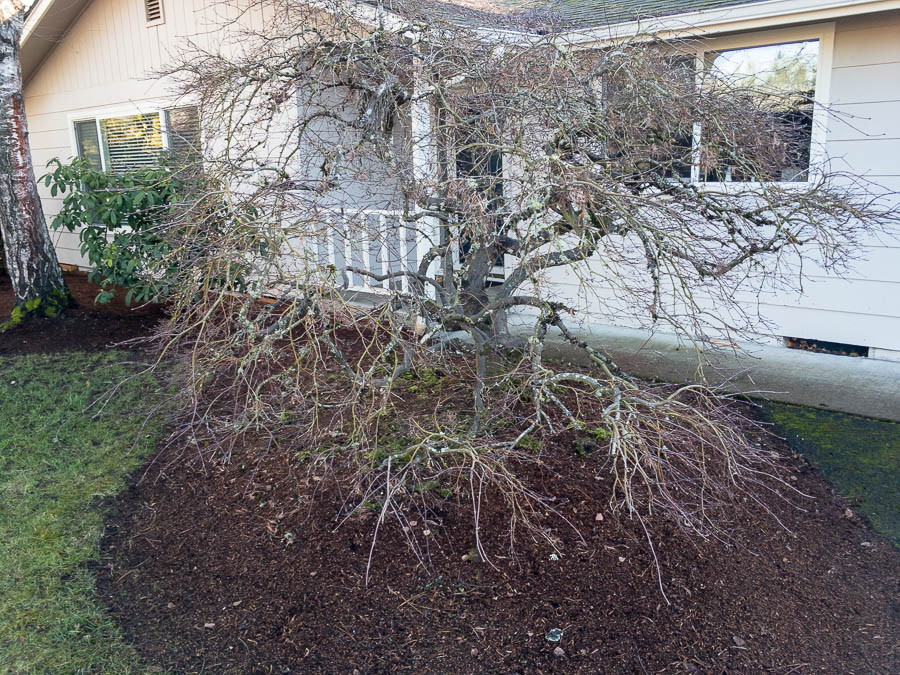 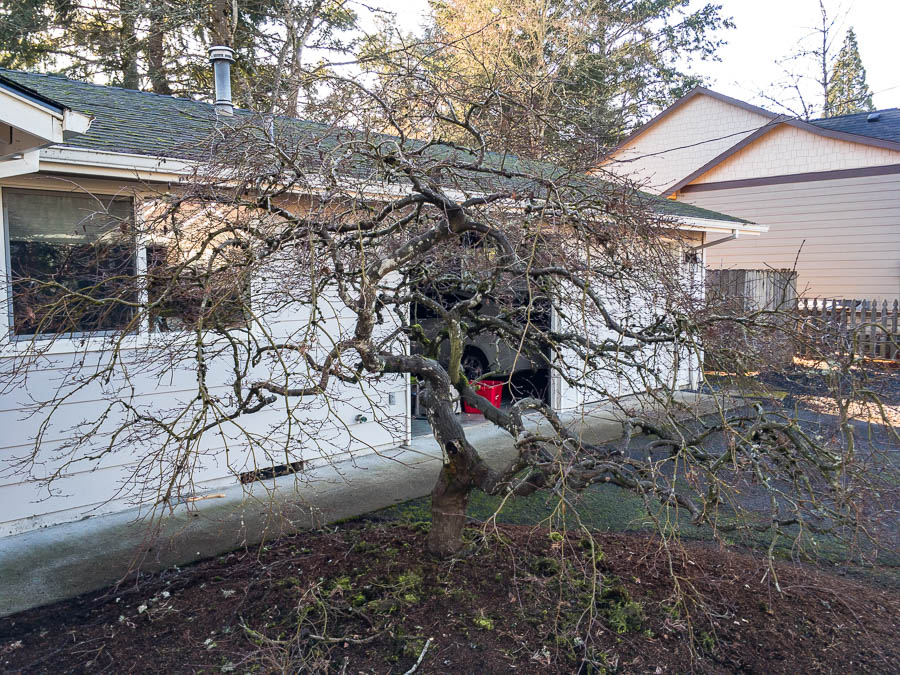 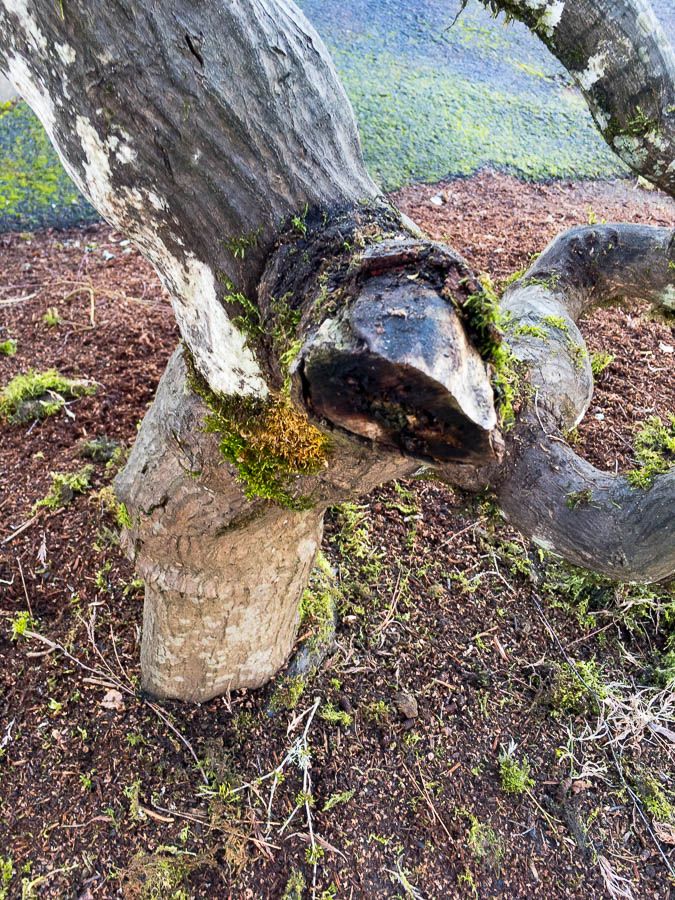 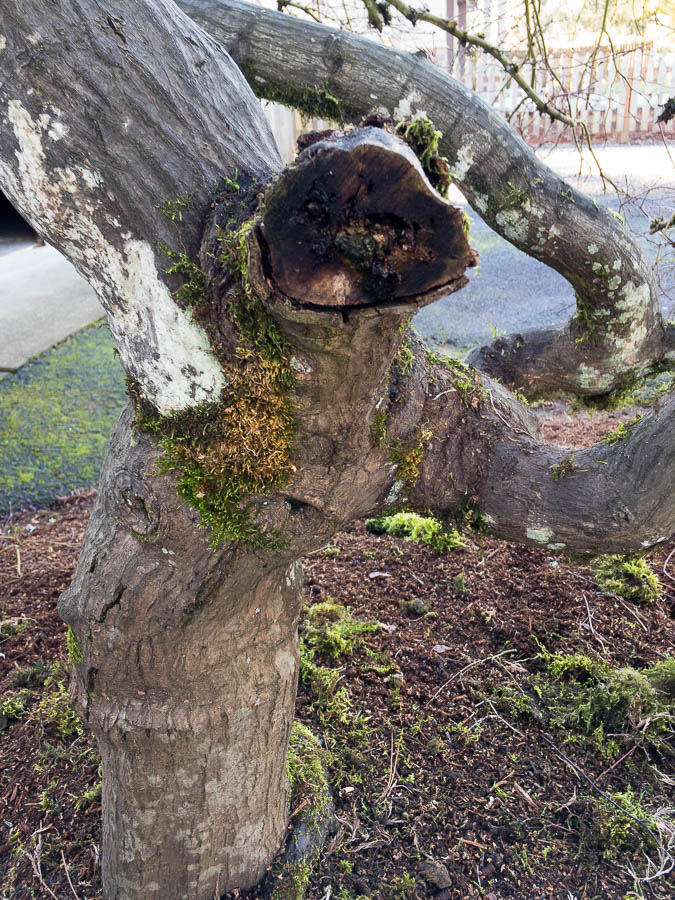 Another image of the white film 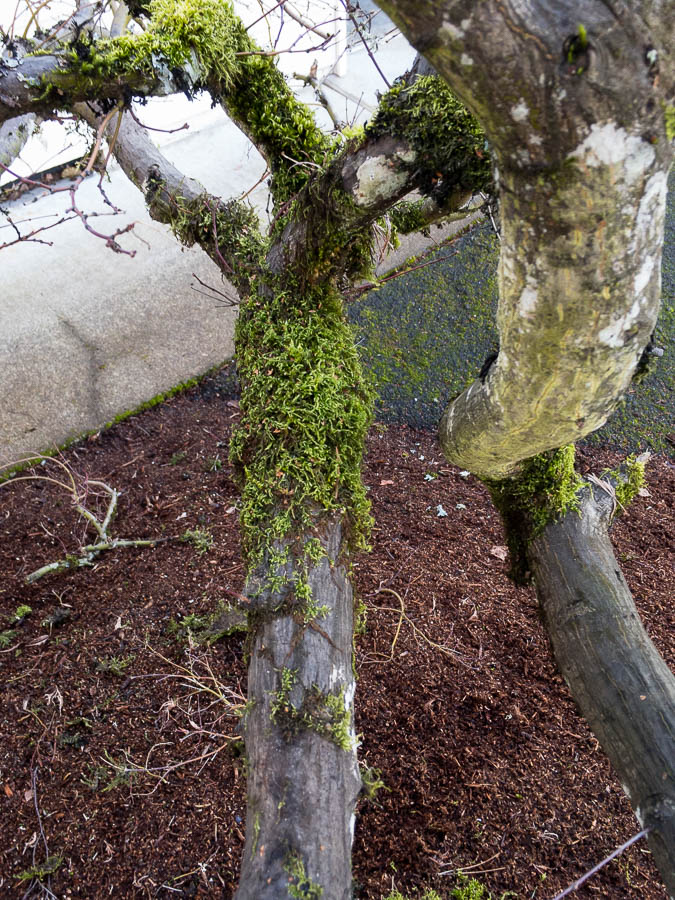 The white patches mostly appear to be one of the lichens rather than fungal mycelium - the fact that they're under the moss isn't unusual, and no treatment is required. Moss and lichens often occur together on old trees, but it is true that weak, very old or diseased trees tend to have more lichen growth on them. Even if there is some fungal mycelium in association with the damper, moss covered areas, there's nothing that can be done about it. More info on lichens here.

As for the rotting, badly cut stump, it's probably worth sawing it off cleanly, but where you saw it off is critical - you need to leave a small collar rather than cutting right back to the main trunk. Instructions in this link show how it should have been done, but cut no. 3 is the one you're interested in, because that's the one you should attempt now.

From looking at the photo, it's possible infection has already spread into the main trunk, but hard to be sure because it could just be moisture sitting in the crook there making the bark look dark. It's definitely worth attempting to remove the branch stump, but you will need a clean and sharp pruning saw to do it efficiently. Given the possibility that some of the wood in that area may still be live, it's best done now, before the sap rises - Acers are known for bleeding profusely, so pruning of these should be carried out from late summer up to mid/late winter. Wound paint is no longer recommended because it causes more problems than it solves, in particular actually preventing proper healing from taking place - the second link above mentions wound paints and gives further information.

As others have noted, the stump is the only problem here. Ideally we want the tree to produce callus tissue which will cover over the bare end of the stump as indicated in the photos in the link provided by @Bamboo. In its current state the tree could never cover the stump with callus tissue. So we help it by cutting back far enough that there is living healthy tissue around the perimeter of the stump and then a flat area to cover over. Ideally the exposed area would be as small as possible, but sometimes you have to cut back a bit further to get a flat area surrounded by good active tissue.

Given this is Oregon we can expect a very damp climate particularly in the west, so the surface of the stump after cutting should shed water as much as possible. One way to achieve this without painting is by making that surface very smooth. You can achieve this effect on living wood by paring with a sharp knife, but with a core of dead wood you might need fine sandpaper, used carefully.

Don't worry about the stumps right now. This spring you could cut them closer. No painting anything. Or go ahead and use Bamboo's pruning to get the correct size of stump. Your zone must be a 5? If it is lower I'd wait to cut the stumps in the spring. You might even want to hire an arborist or a super duper pruner with Japanese background to make sure this tree is healthy. We'll need close ups of your branches to help with pruning but without being there it would be hard to tell if there is rot and if some of your tree's vascular system isn't compromised. At least think about hiring a certified arborist to check this tree!! This tree is very much worth the extra time and money to keep it healthy!!

What is really alarming me (Gorgeous Japanese Maple btw!) is the trunk and soil line. Pull that soil and mulch completely from the bark of the trunk! That kind of moisture on the bark will cause bacteria to girdle your tree. Take the moss OFF the trunk as well for the same reason.

This is an incredible specimen. Breath taking! We can most certainly help you prune correctly. The shape and structure are wonderful. Really a magnificent tree. Glad it isn't in front of your front door...bad feng shui, grins!!

The most critical thing you have to do is pull that soil away from the trunk until you can tell that you've reached the line where roots begin. I wonder how long it has been this way?

Heh, heh, this tree would cost at least 10000 bucks from a nursery that scoops up these gems from home owners that have no idea their value. I was paid once per season to professionally prune these babies. A cool thousand per tree and they were no larger than yours. Would love to help prune this guy! Then I've got tell you about lighting. Up light this tree making sure no one can see the glare of the light (spot light) and you'll have a very impressive entrance to your home at night, great sculpture to view from indoors and plenty of light to see 'bad guys' without shadows and being blinded. Ambient lighting. This tree is worth it. What a treasure!

Not the answer you're looking for? Browse other questions tagged trees plant-health pruning japanese-maple or ask your own question.

3
How to fix a broken limb
7
How can I manage a weeping willow with a broken branch?
7
How can I save a branch injured by wind stress?
4
Has my Japanese Maple completely died?
5
Is my maple tree in trouble?
5
Plum Tree Issue with Rot
8
Japanese Maple Prognosis?
3
Japanese Acer care
3
Can you "seal" a cut off section of a tree to protect it from rot?
3
Can lightning kill a tree by electrocution alone?