How long can I store seed potatoes?

I've just ordered 1kg of heirloom seed potatoes but I only intend to plant 500g or so.

Going forward, I intend to harvest true seed from their fruits, but I'd like to keep a backup in case blight strikes in year 0.

How long can I viably store the seed potatoes and what would be the best conditions? 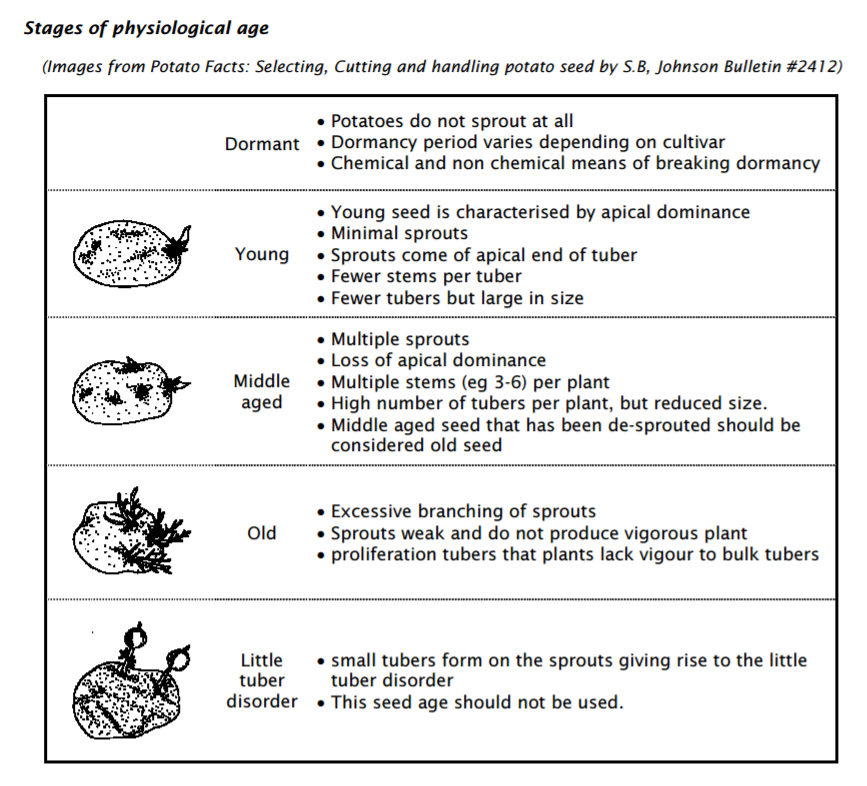 One of the best-known potatoes for storage is Russet Burbank because it has a long dormancy period. The longest period observed for this potato variety over an observation period from 1999-2013 is 200 days at 42 deg F. Storing potatoes at lower temperatures causes sugar formation which is generally undesirable when used for consumption. Herbicides are misted onto potatoes for sale as produce to inhibit sprouting, and commonly chlorpropham is used. This may well affect the viability of seed potatoes, and there are alternatives such as ethylene and essential oils which can inhibit sprouting for a few weeks without affecting viability.

However, the problem is that unlike a seed which is largely metabolically inactive, a seed potato is actively respiring and physiologically ageing. This will eventually trigger the physiological processes that cause sprouting, and measures to try and stop this may well affect the viability for its use as seed. Since you've already ordered tubers as seed, the approximate maximum duration you can keep them as seed before they break dormancy is 200 days but will depend on what variety you ordered and you might be able to extend that for a few weeks without affecting viability using seed inhibitors.

BTW, if you're interested in developing or keeping potato varieties, you can check out the Kenosha Potato Group on facebook, with over 2000 members, and the Seed Savers Project

Edit: I purchased .6 mm mesh last year to protect against the potato tomato psyllid, and it's also has been found to protect against potato blight (Phytophthora infestans) in one part of this country. So, you could consider using this to see if it protects your crop.

The place to "store" your seed potato to have viable seed potatoes next year is in the ground, with roots coming out one direction and plants going the other.

As for getting blighted, your options are to grow in multiple separated locations and hope they don't all get blighted, or order new seed. One blight-prevention option might be to grow in a polytunnel and use drip irrigation, so the foliage never gets wet.

As for the seed from fruits, it's wonderful that you want to become a potato breeder, but as far as I am aware, you will not get the same variety of potato if you do happen to get seed - you might develop an interesting new variety, or you might not, but you won't get the same one you started with.

indeed keeping plants alive through the whole process, which is not what I'm asking.

...which means that you don't understand what a "seed potato" is. If you don't keep it alive, you have compost material, not a seed potato.

19
How do I know when to harvest my potatoes?
9
What should I do with some volunteer potatoes growing in my compost pile?
8
How can I determine when to pick a spiny cucumber, without touching it?
3
How long do I have to harvest my potatoes?
5
Why do we kill store-bought vegetables? Why not store them so they can keep growing?
4
How can I store onion bulbs?
5
Will potatoes in containers grow more potatoes?
11
Why did my potatoes not grow?
1
How and when to harvest potatoes grown in an unorthodox bed?
17
Do potatoes produce seeds that you can store and/or replant?