Why do some people use ice cubes at the roots of outdoor plants to help them flower?

I once recall my late aunt saying that she used to place ice cubes on some of her plants to help them flower outside. The sad thing is, I don't even remember which plant she was talking about, and whether it was one of the plants that were given to me after she passed away.

So, are there any plants that benefit from having ice cubes put near the roots?

Edit: turns out she used them on her peonies to make them flower as we didn't get enough frost days 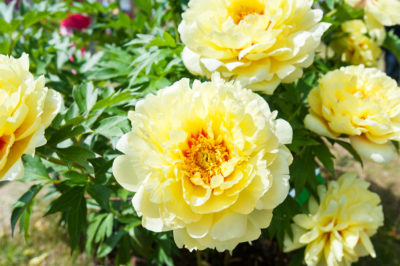 In my opinion, no, its one of those faddy things that gets bandied about, in the same class as coffee grounds being great for everything plantwise, and water droplets causing sunburn on all plant leaves. In theory, using ice cubes is supposed to mean the melt water gets absorbed slowly by the plant, preventing run through on compost which is too dry; some people think it freezes and kills bacteria, and others suggest the cold will 'shock' a plant into flowering. Its been proposed for use in any potted plant, indoors or outside, but I think its nonsense - 'freezing' bacteria doesn't make sense, it won't freeze them, and why would you want to damage any useful bacteria anyway. Equally, shocking a plant into flowering, whilst it may or may not work, isn't great for a long term plant,and if you're caring for your plants properly, the potting medium should never be too dry to absorb water, and even if it is, there are other ways to manage that. There are also plenty of plants which prefer tepid or room temperature water rather than cold (never mind freezing), and although the idea is that, as the ice cube slowly melts, its room temperature by the time it reaches the roots, this isn't necessarily true - surface roots at the top will surely be treated to a cold blast, so I don't give it a lot of credence. Some reading on the subject here https://www.bustle.com/articles/167100-can-you-water-plants-with-ice-cubes-this-trick-is-all-the-rage-but-its-also

I've since talked to my cousin who now has the plants in question, and they're herbaceous paeonies. Internet sites say that these plants need a certain number of chill hours in order to form buds, and some sites are as explicit as saying that 30 chill nights are required otherwise you won't get flowers. It seems a number of other growers who live in temperate climates also ice their plants in winter to help bud formation.

My aunt lived not far from me, and in our location, the average mid-winter temperature gets as low as 3.7 deg C, (38 deg F), with the lowest recorded being -5.5 deg C (22 deg F). However, air temperatures are usually measured at shoulder height and don't tell us about ground frost. This is recorded as "Grass Minimum Temperature" and is not usually mentioned in most weather sites. My own impression of ice on the grass is that we would get about 15 frost days in a year, and 30 would be too much. So, at this point, I'm unsure if her practice was required or not. But it's clear I do need to keep better records for my location!

Not the answer you're looking for? Browse other questions tagged flowers watering or ask your own question.

9
Is it OK to skip watering outdoor plants in the winter in California?
5
How did black-eyed Susans get their name?
6
What is this tall perennial with fragrant white flowers?
6
Do just-repotted plants really need to wait for days before watering them? Why?
2
Why do pink rain lillies flower after rains, but not from being watered? How to make them flower?
9
Can I use water from the clothes dryer to water plants?
3
What to do (after two weeks) with a waterlogged pot plant?
1
Why do people say rhubarb flowers, when I've never seen it flower for me?
4
Help identifying a flowering plant and its pests
4
How do plants survive in the wild without someone watering them?