Can I tell if a boxed, hydroponic, fly-trap growing kit, made for teenagers, would be reliable? 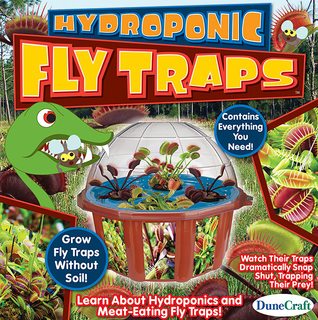 The kit is designed for kids 12 years and older. The parts are all plastic. It comes with seeds, planting cubes, nutrients and a Hydro-Pump. In the description, it says:

Simply follow the planting instructions and see sprouts within a month. Fly Traps are easy and fun to grow, and best yet, will keep your house free of worrisome flies and other flying encroaching insects.

According to their website, the company is dedicated to providing products that are both educational and fun for children of all ages. The company looks reputable, but I also found the same kit at a large seller, and the majority of reviews were very negative. Of course, reviews can't always be trusted.

This isn't a brand or price request. I'm just hoping someone knows about this type of product, and whether or not they have statistically good success rates. You can assume he would carefully follow instructions, and take good care of it.

I want to be clear that he's not interested in becoming what he calls a “real” gardener. He just wants to have a little fun, and grow plants that eat bugs. My daughter doesn't want to buy him anything big, or spend a lot of money. She certainly doesn't want to set up a fancy growing system. Still, neither she nor I want him to be disappointed with his first growing experience.

I don't disagree with Giacomo's post, except for the quantity of bugs they eat, but I can tell you a little more about this subject.

Carnivorous plants are a lot of fun and can be easy to keep. I know that I killed several until I found some good advice. I think I started out with a venus fly trap (VFT) and based on internet advice, I put it outside in the summer (the only thing it got right), watered it like a house plant, and set it on a tray filled with gravel to create humidity. It even suggested I make a super weak solution of miracle grow and brush ONLY the underside of a few leaves with a cotton swab dipped in this solution.

One of the best resources I found for the care of any plant is a book called "The Savage Garden" by Peter D'Amato.

It tells you about where the plants come from, growing requirements, how to make appropriate soil, etc... Between that book and a site called Terraforums.com, I've found a ton of helpful advise and have had great success with my carnivorous plants (CPs).

I believe VFTs are very easy to care for. Granted that's due in part to me living in SC, where they originate, so it's easier for me, but they can be grown in other locations with a little work.

So the kit you're talking about, I wouldn't necessarily recommend it. I picked up a couple to test this spring, but from what I've read, the issue is that CP seeds have a short shelf life and these kits can sit in warehouses and on shelves for long periods of time. The good news is that most people say they contacted the company that makes it, tell them that no seed germinated and that they'd like replacements seeds, and the company sends them out. I guess it's a frequent thing. It seems to me a better business model would be like with ant farms, where you buy the kit and send off for the ants/plants.

Even if you have viable seeds, then plants like VFTs and Sarracenia need a winter dormancy for their seeds. The kits usually say something like moisten the included soil, place the seeds on top of the soil, cover with the dome, and stick in the fridge for 6 weeks.

A better idea might be to just buy a mature plant. I frequently see them in big box stores in the spring. They come in little clear plastic boxes affectionately know as death cubes. One site I had particularly good luck ordering from was PredatoryPlants.com. I've ordered from a few others, but I had the best quality plants and the best customer service from these guys. You're welcome to order from anywhere you choose, though. I'm sure you can get good plants from anywhere.

There are basically two type of CP's you can get. There are tropical ones like nepenthes. I think they're really cool and I'm currently getting my first pitchers on a small N. "Lady Luck" that I ordered. This is what a mature one looks like. 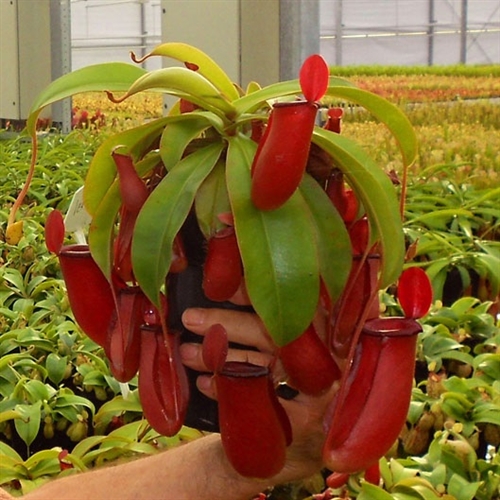 Those are from tropical environments and the cold will kill them. If you have bright lights or windows and provide high humidity, those are good indoor plants. However, there isn't action, like with VFTs. They have pitchers that bugs fall into and can't get out of.

The other main category of CPs are ones that require a winter dormancy. VFTs and Sarracenia, which are mostly what I grow, fall into this category. If you decide to buy a VFT and keep it in the house, you should know that you'll have to provide it with a winter dormancy period. I've never had to do this myself because of where I live, but plenty of people do. They'll put them in the fridge, outside, etc... You can easily research it. If you don't give them this dormancy, they'll eventually die.

Just to tell you how I keep them now, so you'll see how easy it can be, I pot them in a mix of play sand and peat moss. You can get both extremely cheap, more than you'd need for tons of plants. I plant them in cheap plastic pots that are tall and skinny. 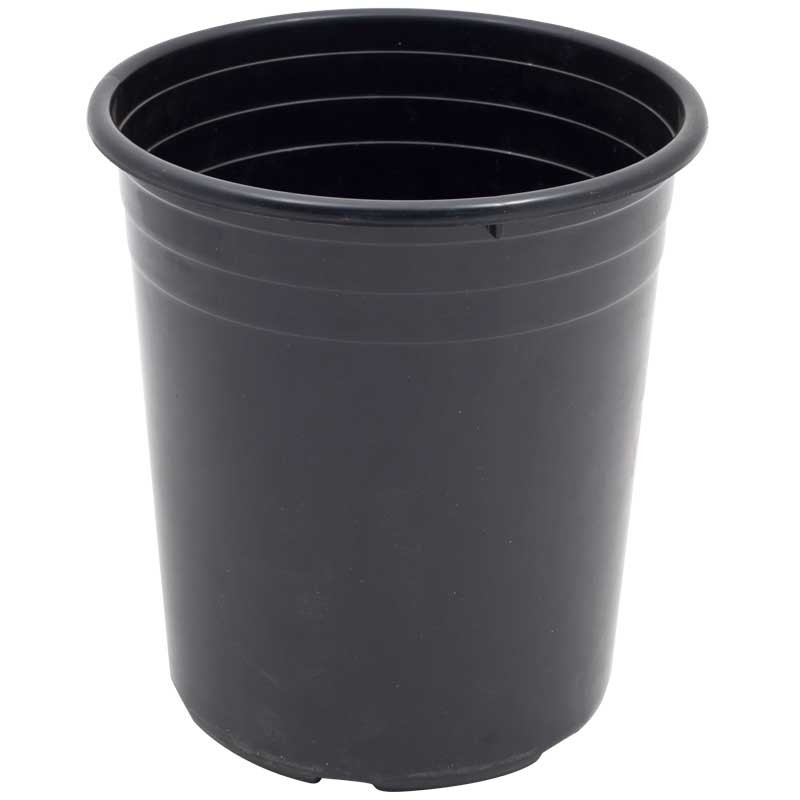 I get a cheap plastic tray and set them out on the front steps in full sun. All I ever do is keep the trays full of water year round and pick out any debris or stray seeds that fall in the top. That's it. They've gone gang-busters and I'm going to have to divide at least one this year. We see temps between 80-110 Fahrenheit. The pots freeze solid and thaw with no ill effect. They catch lots of bugs. The VFTs seem to catch a large number of daddy longlegs. The sarrs will get tubes so full they fall over sometimes. They'll catch a lot of wasps and things like that. Last year I bought a new, pretty sar, called S. Leucophylla "Hurricane Creek White" from the site I mentioned. It's doing well. 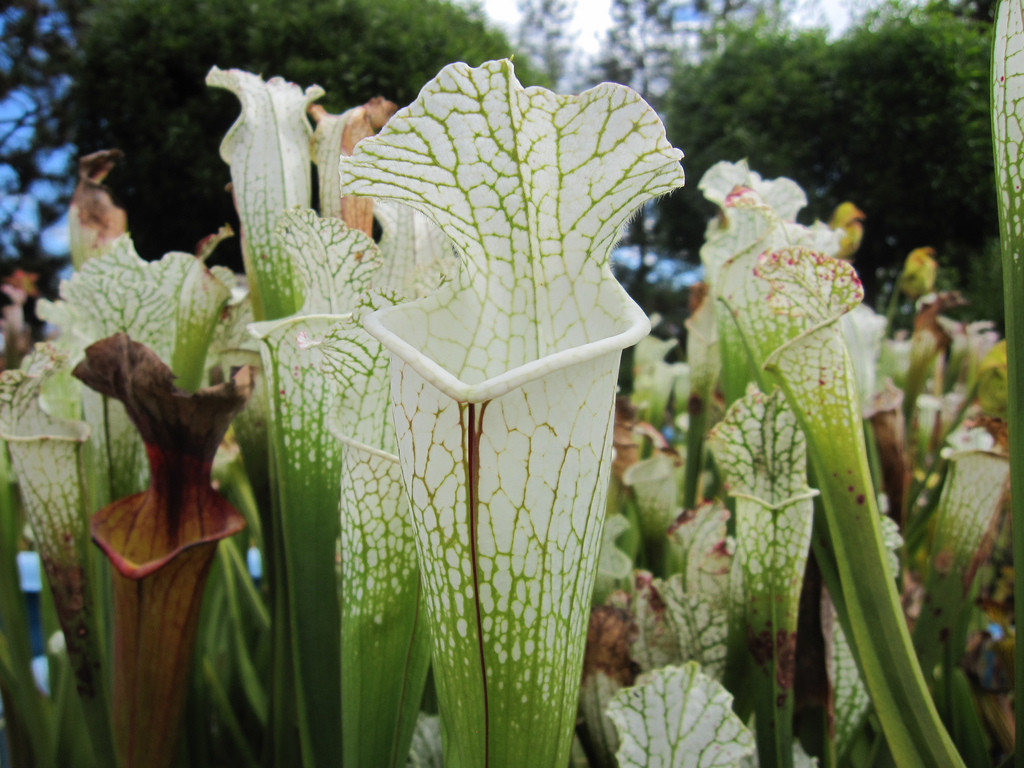 I plant to make a bog garden this year. These plants are very neat and rewarding, so I hope you guys get one and have a lot of fun with it. Just read up on the plants, don't feed them anything but bugs, and for the most part they'll catch their own. They only have so many "snaps" in them before that leaf dies, so try not to play with them too much. They'll catch tons of bugs on their own. Mine always have at least two traps digesting bugs.

I would not recommend it, but I think you should ask this question in your siste site: https://parenting.stackexchange.com/.

The problem I find with this "gifts":

It is easier to go to a botanical garden. The gardens usually have a carnivorous green house, made for children (and few other attraction for children). Then you can check how much the kids will be interested on botanic (I assume none: dinosaurs are still better at that age).

Not the answer you're looking for? Browse other questions tagged growth hydroponic carnivorous-plants venus-fly-trap or ask your own question.

5
Can I use tap water as an alternative to rain water on my Venus fly trap?
4
How can I save my Venus Fly Trap after being watered with tap water?
3
What's the best way to care for a venus fly trap?