How should I care for my struggling Nepenthes Miranda?

I purchased a Nepenthes Miranda roughly over 6-7 months ago and for the first long while it was going super well. The leaves looked waxy and the pods grown were plentiful and large. It wasn't until maybe 2 months ago I noticed things were going wrong.

The waxy look to the plants leaves had started to fade and the pods seemed to stunt in growth. It wasn't long before the protective leaf atop the pod started to wilt and dry up followed by the rest of the pod in the following days. I decided to take my somewhat limited plant knowledge into account and trim off her dead pod at the very top of the vine in hopes the drying/rotting wouldn't spread unto the rest of the plant.

Unfortunately it didn't end there, all the pods fell in line having the same fate as the first. Currently it has one pod that's only just opening up and two pods on the way. The rest of the pods have died and been cut off. I then started to notice the leaves that didn't sprout pods in the first place were starting to wilt and go brown.

I then wasn't sure if I should trim those off (so they are still on the plant). When I purchased the plant it had a couple of dried out dead leaves attached at the base and I never trimmed them off out of fear there was a reason the seller didn't, as he seemed quite passionate about the plants.

I kept it in living conditions I researched and found suitable for the plant. I had an old fish terrarium laying around, so for the longest time I kept my Nepenthes in there. I turned the light on when I woke up in the morning and turned it off before I went to bed to try to emulate daytime/nighttime cycles for the plant. I watered it every time the soil felt dry and even put the lid of a cheese grater under the pot so there wouldn't be any sitting in water. I also used osmosis water and nothing but osmosis water.

Sadly my Nepenthes has out grown the terrarium and after a lot of research I learned that the Miranda can live outside of one so shortly after the repotting process I set her on my bookshelf and got my father (a carpenter) to take the lid of the terrarium with the light and fixture it above my plant.

I live in Canada so you can imagine why I don't want to sit a tropical plant by the windowsill for its sunlight. I'm worried perhaps my room isn't humid enough or that it's getting too little/too much water and sunlight.

Oh and I also feed the plant freeze-dried crickets which I read from multiple sources work best for these plants if you don't live in a bug infested home. I only gave her one in a random pod at a time until I saw it was visibly disintegrated because the crickets were fairly large. I have currently discontinued giving the plant any crickets because it has just been repotted and is still going through stress.

Any help on this matter would be much appreciated!

The current set up, you can see one of the withered pods I just cut off. 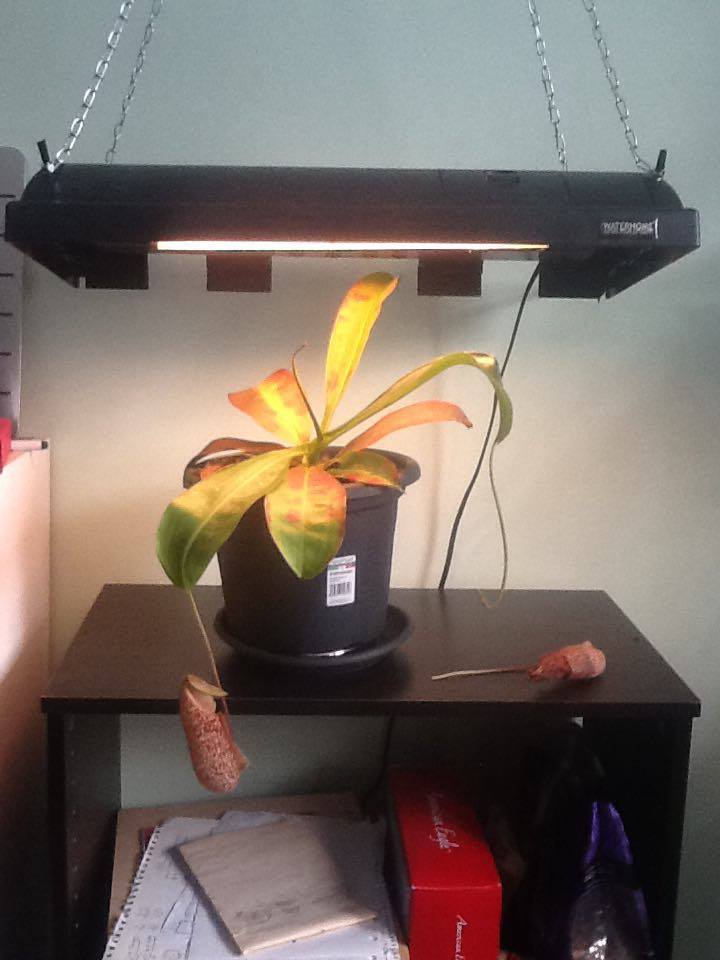 The leaves that are drying out and dying. 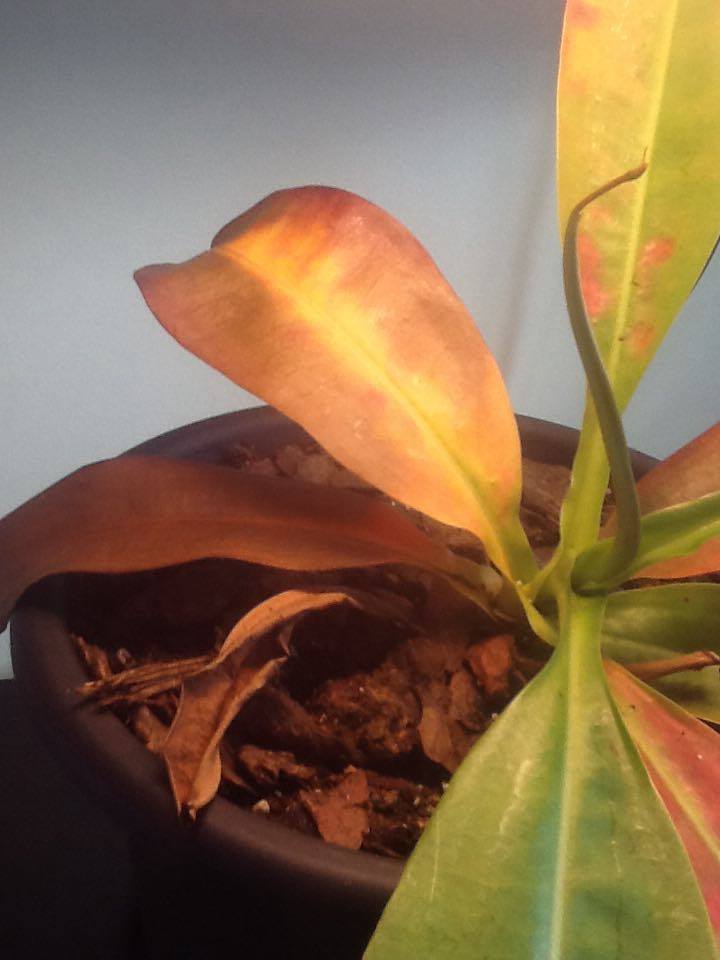 Nepenthes, or the Asian pitcher plant, naturally grows in the tropical regions of Asia either in high mountain rain forests or in warm lowland grasslands at the base of mountains. They are divided into two types, those that live above 3000 feet (highlands), and those that live below that (lowlands) with differing requirements. The Nepenthes x 'Miranda' is an intermediate or lowlands type and requires warm night time temperatures (above 21 deg C). Below this, and they are subject to developing brown spots on their leaves.

Lowlands Nepenthes requires a high humidity level and so you might be tempted to grow them inside a terrarium. But they rapidly outgrow most household terrariums and then you have the problem of trying to get your large plant to adjust to lower humidity levels.

I note also that you've repotted your plant so it may be suffering some sort of transplant shock. Did you use exactly the same media as the plant came in, or something else?

Nepenthes also requires high light levels and a 20 Watt terrarium light is insufficient. You'll need at least 2 x 40 Watt fluorescent lamps 8 inches above the plant, kept on for 14 daylight hours during Summer and Spring, and 12 hours for the rest of the year.

To see whether the light from a window might be sufficient, you can install a lux meter app on your phone and measure the light from the window and from your existing lights to see if they're anywhere close.

Since they live at the base of mountains, their roots are bathed in oxygenated water running down the mountains. So, you need to keep the roots moist but not let them sit in stagnant water. If you let the soil dry out, you will kill the plant. People have even grown them successfully hydroponically.

It's not normally needed to feed these plants since they require only minuscule amounts of nutrition, eg. one insect a month. The roots do not take up any nutrients of note. As an alternative to insects, you can feed the pitcher with 1/4 strength orchid fertilizer once a fortnight.

Based on the above, I suspect your plant is being underwatered and has insufficient lighting.

It almost looks like TOO much light based on the photos. Also possibly an imbalance in the potting mix. I have added superthrive to watering my nepenthes and it helps (not using fertilizer ever). Also, it is possible that it is overwatered ...

It.just a leafburn as long as new leaves.healthy you dont have to.worry. it often happens in tropical area like my nepentheses because we leave it on dirrect sun

Not the answer you're looking for? Browse other questions tagged diagnosis houseplants tropical carnivorous-plants nepenthes or ask your own question.

8
Nepenthes "Lady Luck" Help
5
Why are the leaves on my peach tree sapling wilting and dropping off?
2
Is My Tamarind Tree Dead?
3
How long does it take for a Nepenthes vine to grow?
1
Why is my houseplant dying?
0
My Norway Spruce is Dying
2
Mystery House Plant (Succulent) is sick?
3
When to repot my 2 baby tamarind trees?