My aubergine plant seems to be developing some nutrient deficiency. I pulled it from the ground in autumn about 9 months ago and placed it into an air pruning pot with some potting mix, and kept it inside over winter. During this period it still flowered and produced several fruits which I consumed. The only issue were some spider mites which disappeared after spraying with neem oil.

I took it outside in spring after the last frosts, and it's started to flower again with fruits forming. I noticed a light aphid infestation today and sprayed with insecticidal soap. I've only fed it twice with a fish blood and bone mix, and general water with aquarium water.

I've noticed today that the older leaves are suffering with some interveinal yellowing, which seems to be starting from the middle and spreading out. Younger leaves are still green.

As aubergines go, this one is only 2 foot tall versus reaching the roof as with greenhouse grown plants.

Since the young leaves are not yet affected, is this more likely to be magnesium versus manganese or iron? pH is 7.4, and soil is moist. 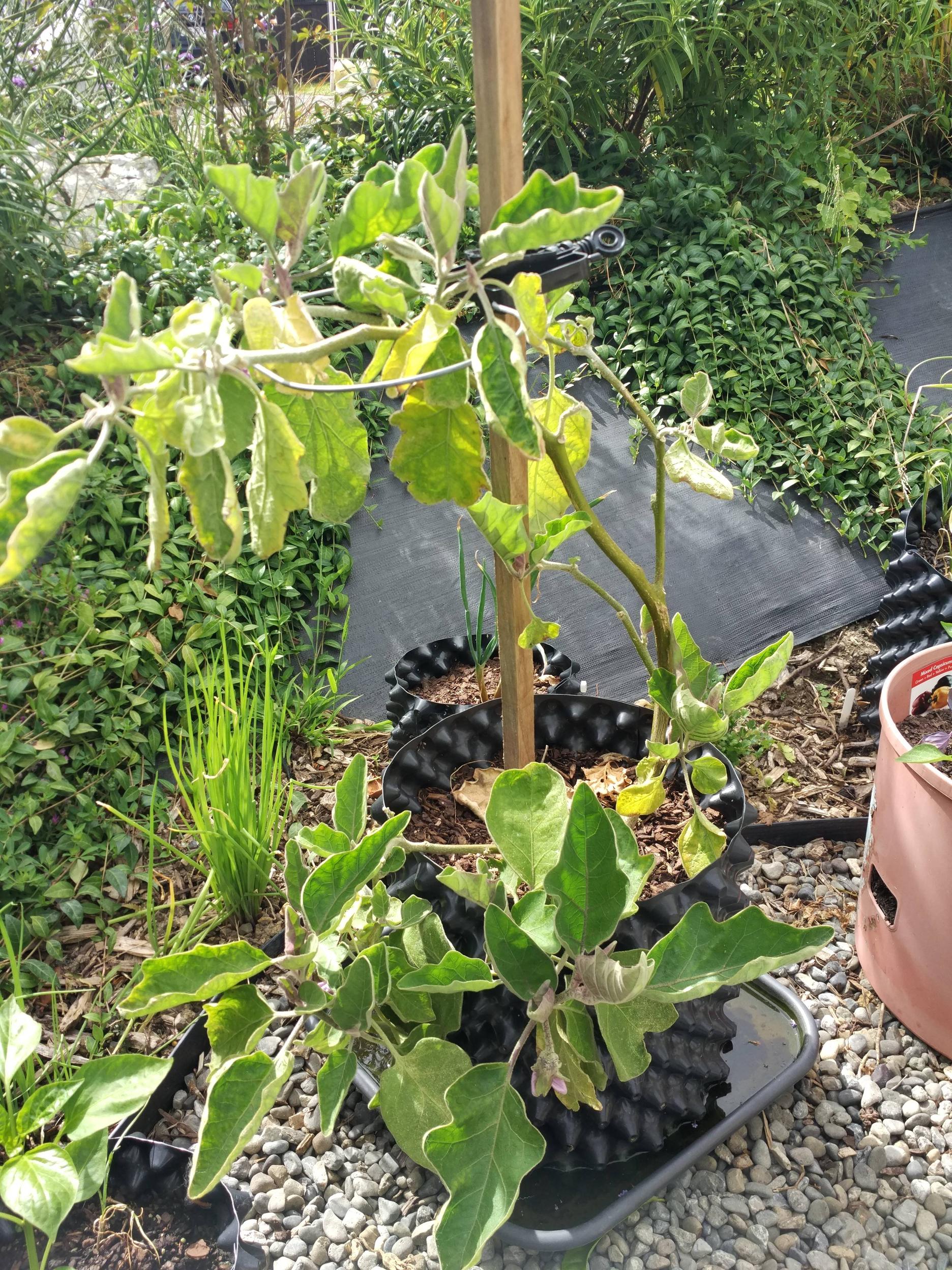 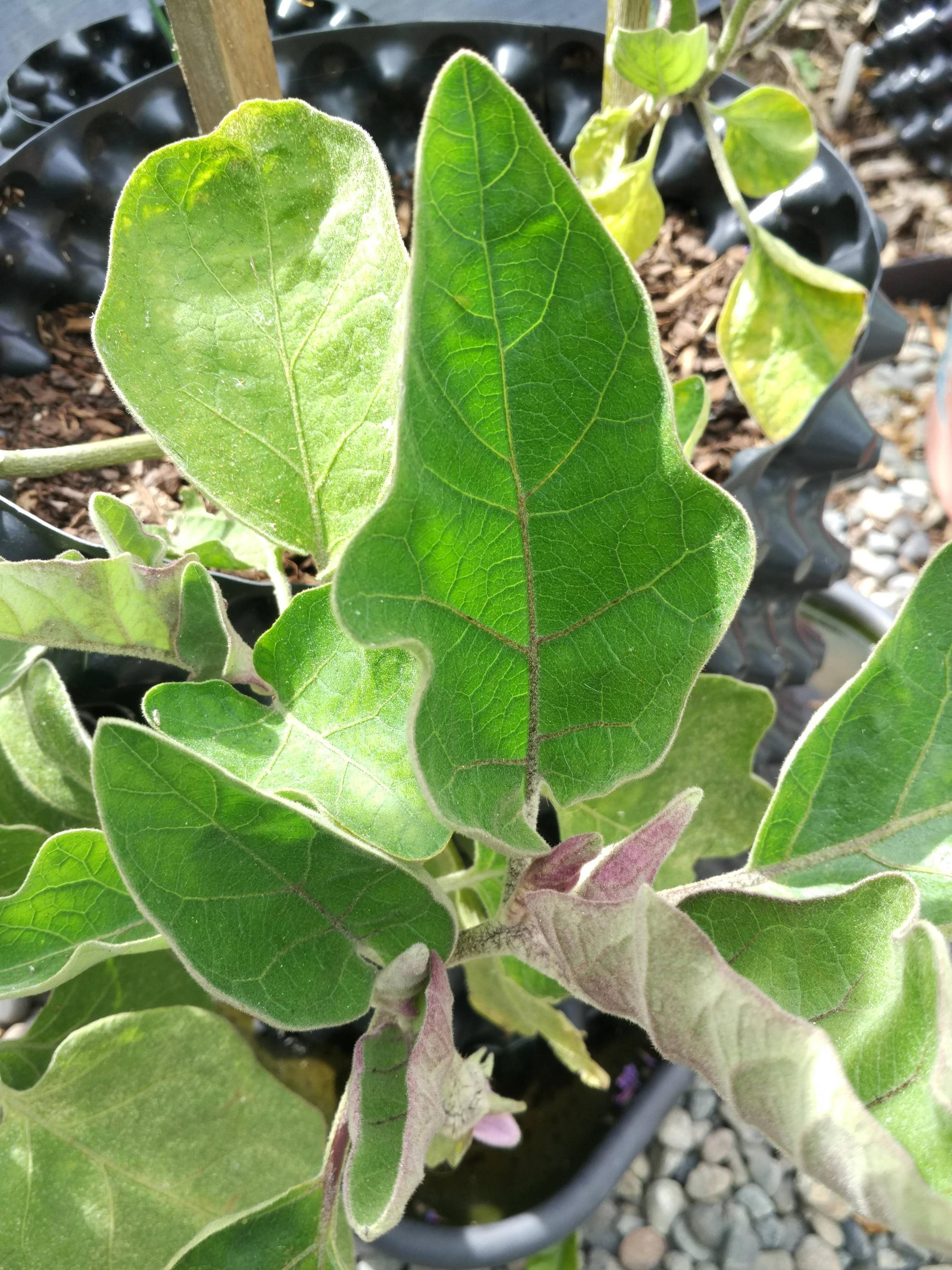 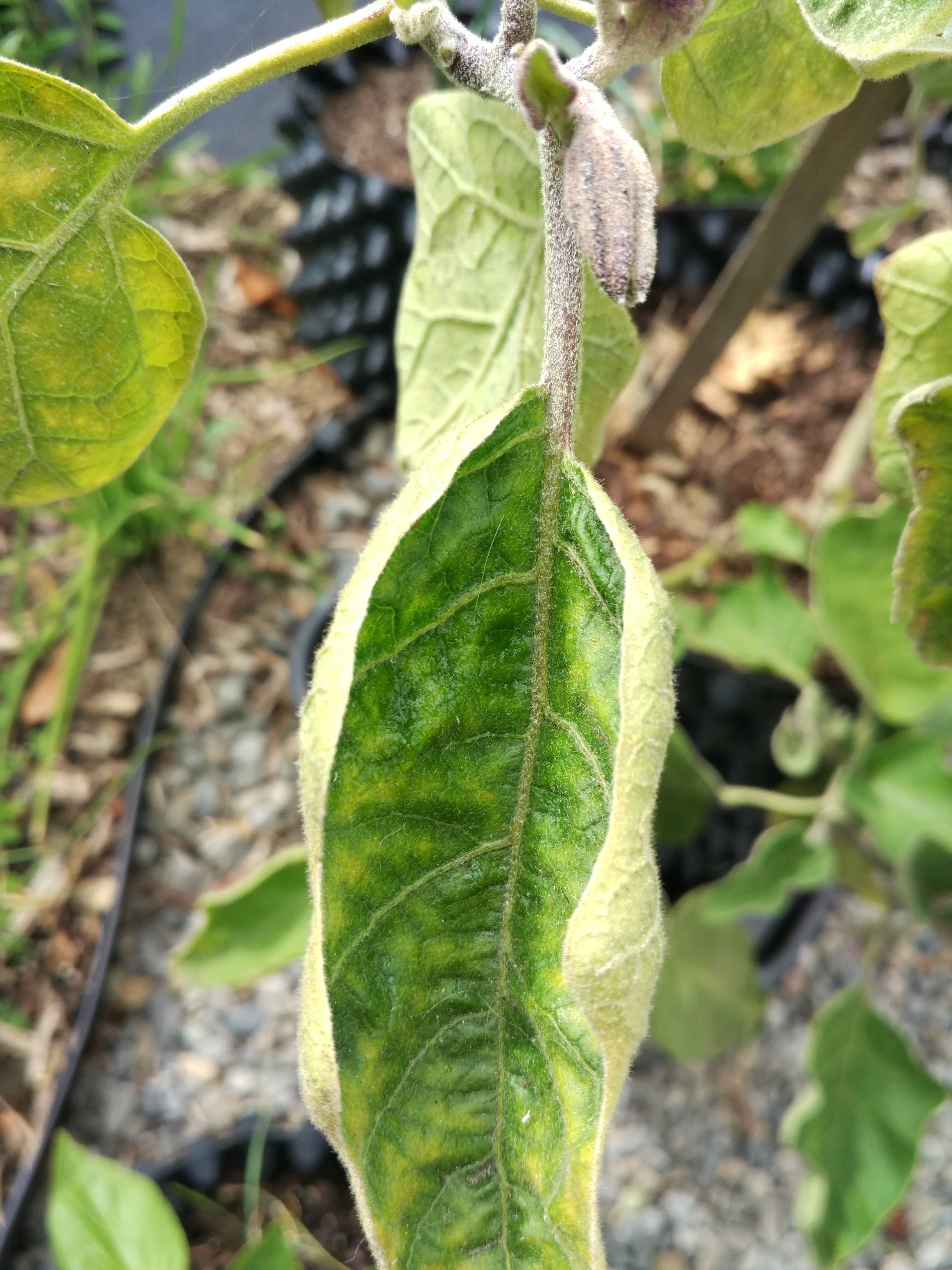 First, I just noticed that you have 7.4 pH and that is a big no no for solanaceae. Too high for MOST plants. You need to get that plant into fresh potting soil. Normally potting soil is lower in pH. Takes a bit of time and work to lower pH UNLESS you are using potting soil. When you get fresh potting soil, test the pH with whatever you use, I use 3 different methods. 5.7 to 6.5...7.4 is very unusual. And you do have a stressed plant on a number of counts. First the spider mite which sure looks as if it is going strong. Being taken out of the garden soil and put in a pot and with the pH that high I can't comment on your fertilizer nor should you worry about fertilizer whether the chemicals are deficient or in excess. That pH has to be fixed first. Otherwise chemicals that plant needs that plant can not use until it is more acidic. That is way too high for alkaline loving plants such as lawns and marijuana!

Spider mite attack plants with much more success when a plant is stressed and weakened. And if you look closely at those leaves I'll put money down that you can see little spider mites and webbing and insect poop galore! To include white fly...I can see a bit.

To me, the yellowing on older leaves looks like plain old nitrogen deficiency.

9
How much fertilizer do I need for my vegetable garden?
2
What might be eating my butter bibb lettuce plants?
7
Why do the leaves on my Meyer lemon have blotchy yellow areas?
3
Eggplant/aubergine growing little tubular bits instead of leaves
2
Having Various Issues With Multiple Tomato Plants
2
Kale leaves turning yellow in hydroponic system
1
Aubergine/eggplant rotting instead of ripening
2
3 Mango Trees (6 months old); Grayish-Orange Spots heavily progressed; Blackening/brown curling leaf tips; 1 Mango Plant losing all its leaves!