What is this grassy weed called?

I have a weed growing in parts of my yard that grows really fast and tends to take over unmown patches if I'm not attentive. My house in central North Carolina came with a wildflower garden that this stuff has come to dominate. In the winter it turns brown and dies back. It doesn't flower, and the leaves are on the soft, flexible side and not prickly at all. Very uniform green color.

The picture below is actually a still from a short video I took. At the time I thought that would give a better sense of depth. I took this in October and have only gotten around to asking the question now (sorry about that), so I can't take a better picture right now since it's all withered and brown.

Update: I have added a clearer picture. I noticed that my video starts with a clearer shot, so I captured that and added it. It's smaller since I didn't want to include the "play" button in the middle. 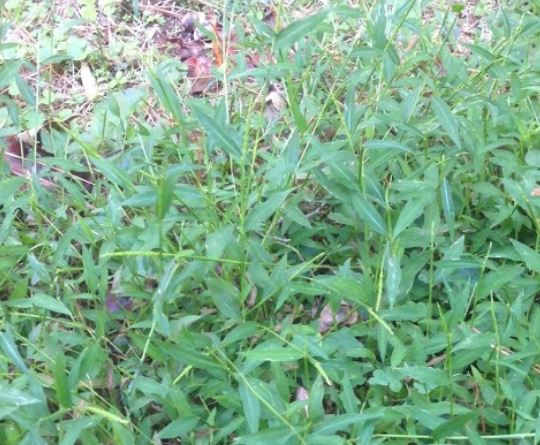 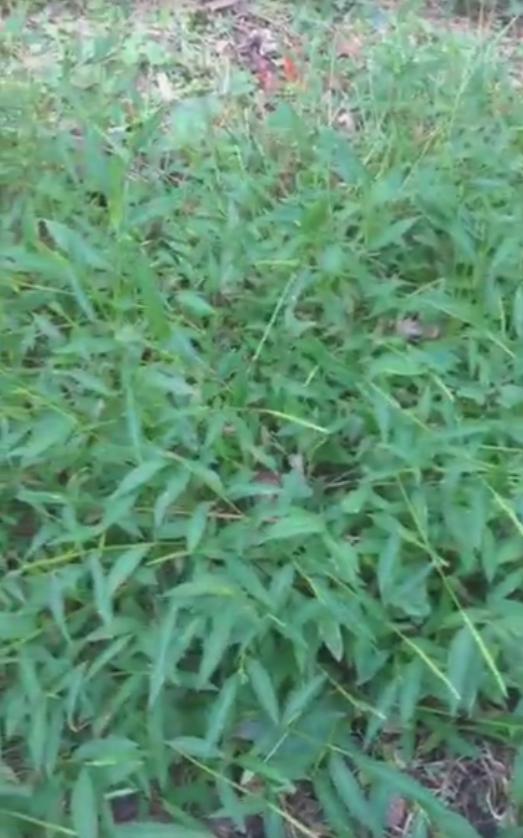 I posted this on Facebook also and a local friend identified it as Japanese Stiltgrass (Microstegium vimineum). From pictures on the web it looks like the right ID, but I would be interested to hear if anyone thinks something else is more likely.

Try as I might I am unable to see much detail. A first guess would be Lady's thumb...Lady's thumb or persicaria Can you see a dark splotch in the middle of the leaf? Please send a clearer picture, a close up, what are the flowers like or can you find remnants of flowers/seed? If this is Persicaria don't worry. You'll never be able to eliminate this plant but easy to control using environmental/manual tricks such as starving this plant. Just weed wack it down BEFORE it goes to seed. Every time you feel like firing up your weed wacker wack any new growth down. You should also be dumping decomposed organic mulch on your beds/soil regularly. 2" will prohibit any germination of any weed seeds. Have to be aware about the thickness of mulch over some plant roots. If you don't have a weed wacker or line trimmer you should get one. Gas powered please, not electric. And definitely should have a gas powered blower! These two tools should be in everyone's garage who has a landscape. Life out of doors is so vastly more meaningful and fun.

By the way, I don't use bark mulch, ever. I use an incredible decomposed mulch made from human poo, sawdust and controlled composting. I've found this isn't available or common. If bark mulch is all there is for you, chose the finest ground bark mulch.