How far back should you prune rambling roses with lots of old/diseased wood?

I have a rambling rose (or maybe climbing, I'm not too sure) that has a lot of old or possibly diseased wood. I've read that it's good to remove old wood, but since both main stems have old wood at the base this would mean cutting it back right down to the base.

So, for a rose in this condition should you cut back close to the base? If not, then how much? 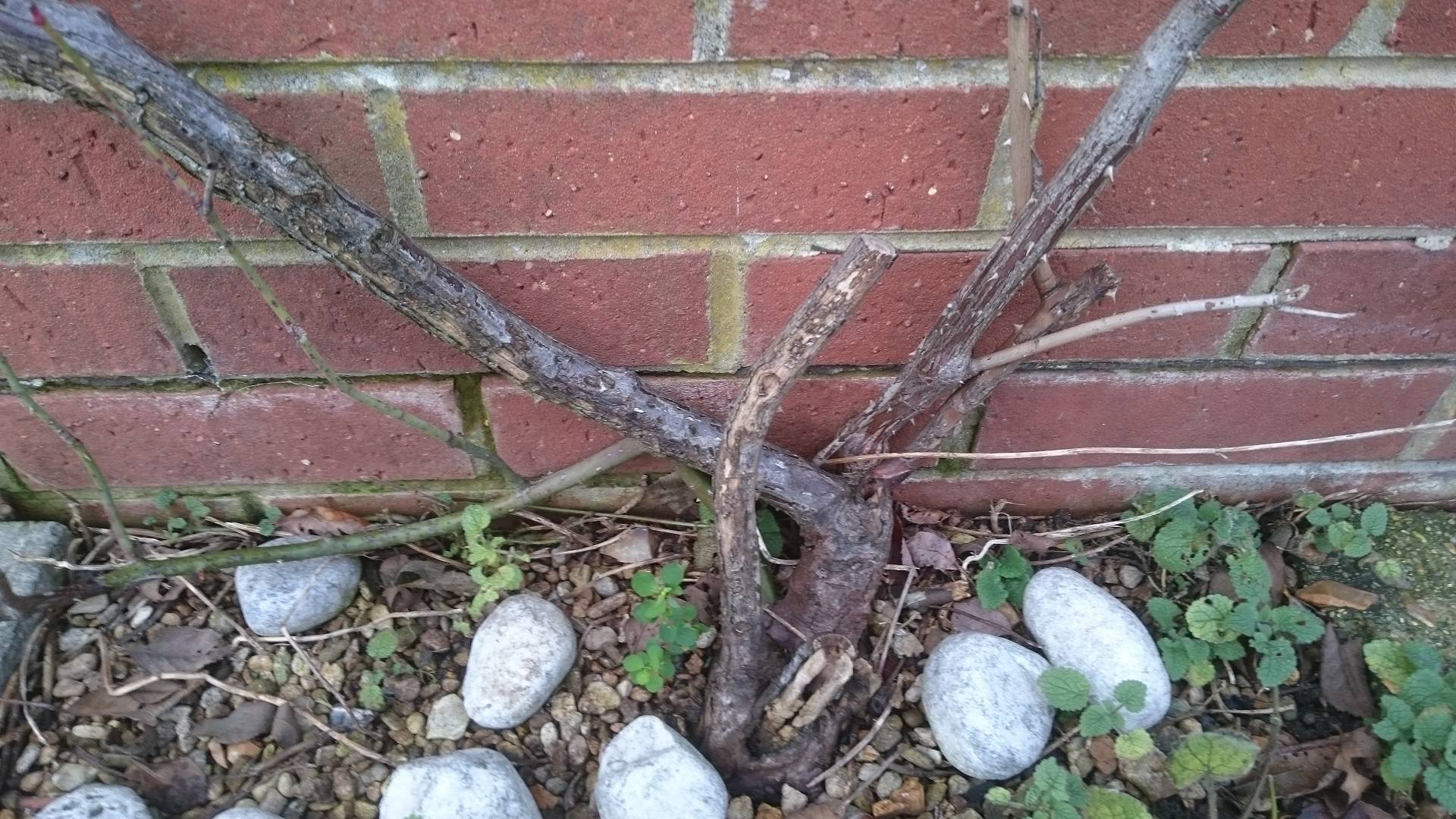 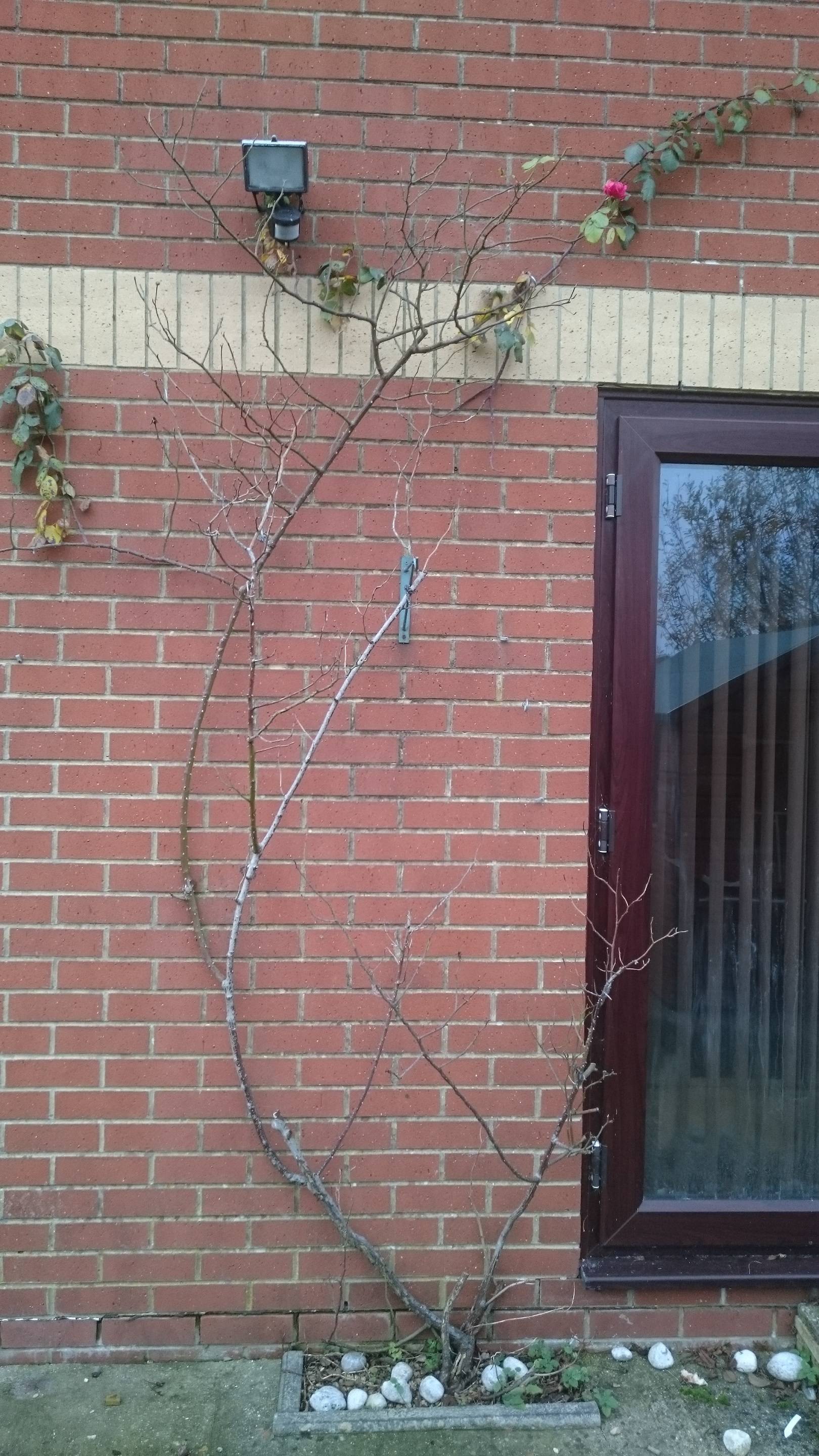 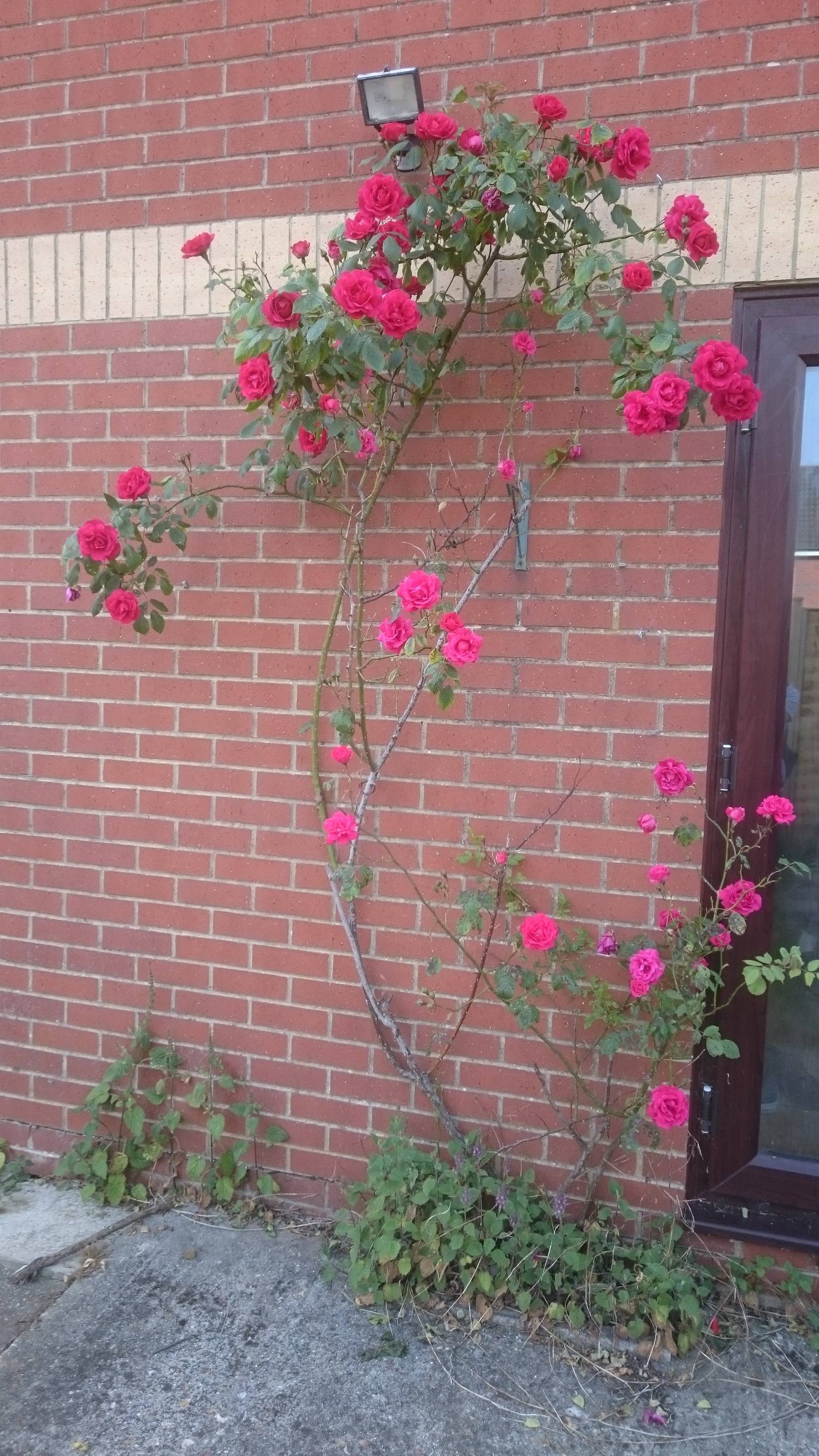 I think this is a climbing rose rather than a rambler - ramblers tend to have many more stems and can be quite thicket like. If your rose is repeat flowering, rather than just producing a single flush of flowers around June and then no more, that makes it more likely its a climber. In the UK, the time to prune climbers is actually last week of February, or during March, though you can certainly remove some of the length at the top to prevent it blowing about all winter.

The guidance for pruning is this - first remove any dead and diseased branches, then any branches which are crossing and rubbing each other. Although the wood near the base on your rose looks dead, it isn't, because the growth at the top is coming off the left hand branch. Cut the remaining stems down to an outward facing bud (usually, on older wood, it just looks like a little line or joint encircling the stem rather than a bud), at an angle, sloped away from the bud on the outside to allow rain to run off. Because yours obviously hasn't been pruned properly for some time,I'd be quite ruthless with it, cutting that left hand branch down to probably a foot (or two feet, if you're not feeling brave), with less taken off the other, right hand branch, because that's still leafing out nearer the base, though you will need to shorten the branch which is heading upwards and to the left more than the rest of that side. If it's March when you do this, give the rose a feed with something like Toprose, forked in lightly round the base; done in February, wait till mid/end March, depending on the weather, to apply fertilizer.

You'll likely find new stems arising from the base following this hard pruning and over time, you'll be able to cut out the existing older stems altogether.

You will need clean, sharp secateurs and a pair of loppers to make clean cuts to avoid leaving any fractured or shredded parts on the stems.

Not the answer you're looking for? Browse other questions tagged pruning roses or ask your own question.

31
How should I prune my vine tomatoes?
11
How to prune roses with tall branches?
10
What's a good method for pruning an apple tree?
5
Can anyone identify this rose?
6
How should I treat a weigela bush with a large section of dead branches?
2
How close can I plant a new climbing rose to an existing mature plant?
2
Best way of pruning Cardinal Creeper
3
Can I prune an indoor avocado tree all the way back to stem?
3
My graduation rose is sprouting, help!
1
Avocado plant “gone wrong”; can I lop off the top and get it back on track?