How should I prune this grafted lemon tree? 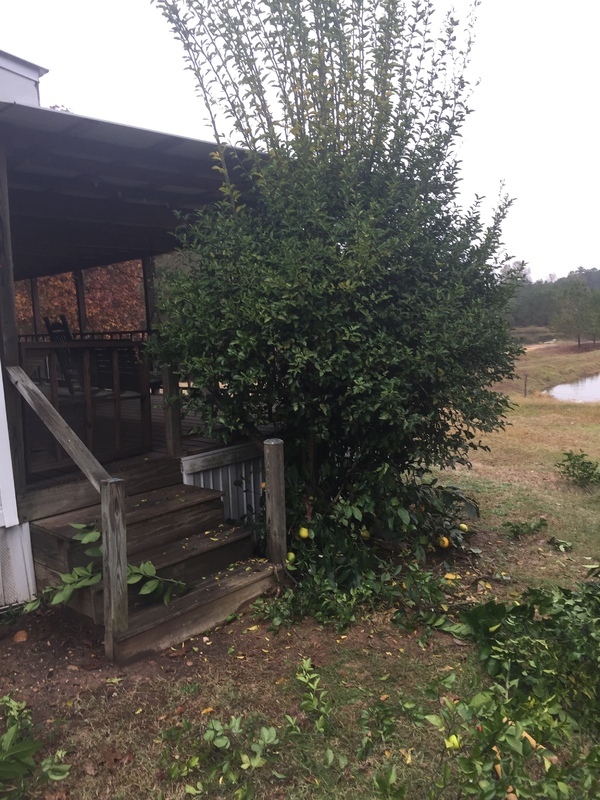 My dad has this terrible tree setup, I think it's 2 different trees, a lemon tree covered by a taller bushy tree. I don't have full control here, I can't cut these down/tear them out, but I am charged with the task of picking the lemons. Every lemon, before it freezes tonight. The lower, deeper lemons were so far into this big overgrown tree with giant thorns, and it's so thick and low to the ground I'd have to crawl on my belly in the mud to get to half the lemons in this horrible setup, so I started cutting some of the lower branches away from the ground. I realize this isn't the season to be doing this but I'm told I have to handle it now some way or the other.

Obviously I want to be able to get to the lemons, cut the branches off of that stairway, and make the result look somewhat good. Could someone identify these trees so I can lookup what they're supposed to look like after pruning, and any other info that can help me create a decent result out of this scenario.

Edit: I'm told they're grafted. I have a vague understanding about grafting. Looks like the bush died down, came back and the plant went up high but the lemon part only grew down low. I don't know if there is a great solution here, in this case. If the answer is "Meh, it's hopeless," then just say that.

You may be right - the grafted part died back, the rootstock took over, and the only part that's left of the original grafted lemon is at the bottom. It shouldn't be thorny - the thorny parts will be off the rootstock, which might be sour lemon or some other citrus rootstock, hard to say, but growth off the stock might very well be thorny. If the leaves on the bottom parts producing lemons look a little different from the other leaves, that would make it more likely this is what's happened.

In theory then, all parts which are off the rootstock should be removed right back to the base, leaving only the grafted part, which is presumably the bit that's managing to produce lemons. It likely won't look great, but should be done regardless. If the branches producing fruits are also thorny, that might mean they're off the rootstock too, in which case, there's not much you can do except prune it back to reshape.

Depending where you are and how cold the winters get, taking it all down to just the graft now might be a bit risky, so if your winters are quite vicious, then wait till the plant's gone dormant and then sort through and take out what's necessary. If its just the occasional frost here and there that comprises winter, then I'd risk doing it, it looks awful as it is, but that's just my personal aesthetic opinion! If there's any of the grafted part left, that will grow on better with the sucker growth from the stock removed and hereafter, regularly removed if it appears again.

21
How should I prune lemon trees?
8
Have a grafted fruit tree. Want to have less of one of the fruits
4
Why is my lemon tree dying?
9
How big a lemon tree can I grow indoors?
5
Should I prune this new olive tree?
5
How to grow Crepe Myrtle to look like umbrella?
3
Can I remove half the branches from this sycamore?
7
Is this a sucker? Can they grow above the graft line?