How to plant a new lawn on a hillside?

I have a hill beside my house with an approximate 25% grade. What steps can I take to get a new lawn planted on this hillside, without it being washed away with erosion? Would I need to put some kind of straw-like covering over it and secure that to the ground with stakes, or should just planting the seeds, fertilizing and watering be enough?

One thing you can do is dig a series of swales. They can be nearly invisible -- you dig a shallow ditch on contour, and then fill it in with compost so that you can't really even see it. This helps slow runoff and avoid erosion. (You probably won't get away with "invisible" on a 25% slope.) Additionally, the swale holds water and allows it to seep slowly into the lawn below. This gives the lawn a more even source of water.

In revising this answer, I realize that I should have recommended planting trees at intervals on this slope. If possible, you want something that will root deeply and hold the soil well. A major rain event could cause a landslide.

Here's an illustration from The Permaculture Research Institute: 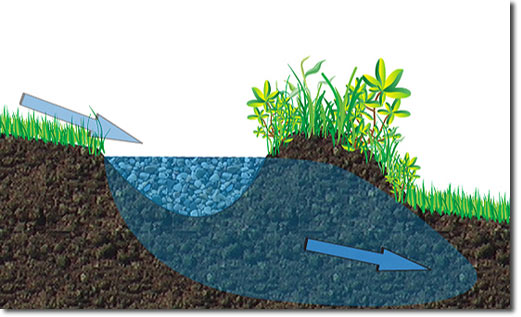 That same page has an informative video on how it is supposed to work.

If you don't do this (and I have gotten away with not doing it, though not as steep as 25%), you can possibly get by with straw covering and keeping it moist. The risk here is that a thunderstorm which drops a bunch of rain all at once can wipe your planting out.

Hydroseeding would be another possibility. You'd have to rent a machine or get someone to come in and do this for you. I've seen (but haven't done myself) some very steep slopes successfully planted with a hydroseeder.

We have really good luck with composted horse manure, though we don't generally care about all the weeds (mostly clover) that comes along with it. About a 2" thick layer of this on top of the soil does a great job. The compost absorbs a ton of moisture, I've never seen it erode. It's kind of like hydroseeding, but with shovels instead of a machine, and a "ready made" seed & fertilizer mixture... ;)

August 2007, we started with this: (click image to enlarge) 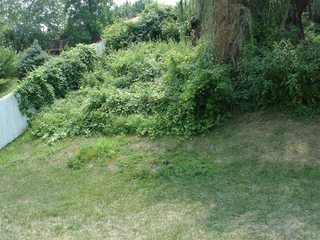 Beginning of April 2008, we cleared the slope back to a stone wall (we had no idea it was there when we started clearing), then began preparing the slope for seeding: (click image to enlarge) 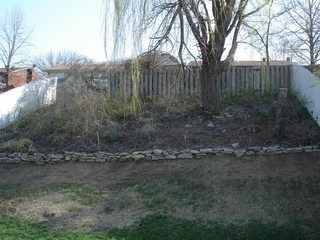 End of April 2008, after seeding, putting down some biodegradable grass seed cover, a little spot patching of compost and some straw covering, we end up with this: (click image to enlarge) 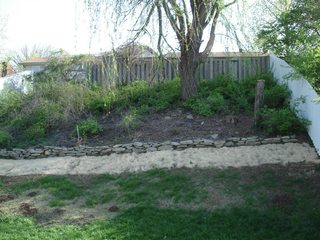 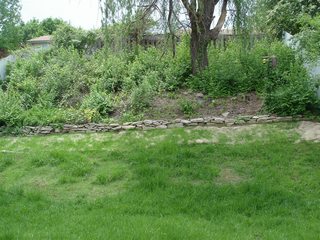 Here are a couple of things I learnt from doing the above:

Here are a few things I would do if I had to do something similar again: 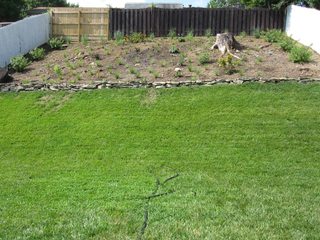 As you can see from the above photo, I am now in the process of establishing a Missouri native garden on the 30° slope area (approx 50 feet (15m) x 30 feet (9m)) behind the stone wall.

It depends how much rain/water flow the slope gets. Most places straw is sufficient. However in places of increased water flow it may be necessary to also add plastic netting (tied down of course with stakes). A more expensive option is to spray a (biodegradable) foam grass-seed solution that hardens and replaces both the straw and the netting.

Not the answer you're looking for? Browse other questions tagged lawn or ask your own question.

24
How can I naturally encourage birds into my garden?
17
Do I need to lay landscape fabric under ground-cover plants to prevent weeds growing?
16
How do I bake weeds out of my landscaping?

4
How do I start a new lawn?
3
Does new lawn/sod need aeration?
4
Returning a garden paved for 30 years with packed clay below, back to lawn
7
Minimal install of artificial grass for small enclosed pet area
4
Caring tips for a new lawn
2
What should a new lawn look like after one week?
1
New lawn renovation