How can we help our garden frogs in an arid climate?

I live on an arid island off the African coast, off the grid in a very sparsely vegetated area, far away from any neighbours. The summer has been fairly hot and most vegetation has dried away, waiting for the rainy season.

Somehow though, there are some frogs living in our garden! 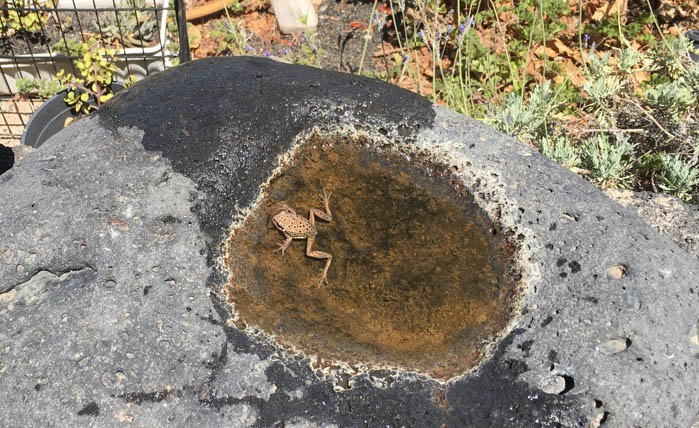 (the photo was a lucky shot - they usually keep out of sight, which is just as well, as we have many predatory birds that usually hunt for the many lizards out here.)

We suspect they survive by living in our underground cisterns. However, one of the cisterns has broken, and since then, they seem to have taken up residence in our largest watering can. Which is fine, but we are unsure about how to best help them:

Frogs are great natural garden predators of insects and it doesn't take much to attract them to your yard. They like:

You should review what insects also like these conditions. If disease carrying mosquitoes are present in your area then you may not want to make a water feature.

These requirements can be done with a pond liner (EPDM or even clay or stone) and a small pump to move the water.

If you study the life cycle of the frogs in your area you may find that all they need is a vernal pond. This kind of pond is full in the spring where it is popular for honeymoons and egg laying, then dries up in late spring or early summer. This gets around the problem of a year round pond where you would have to top it up with water in the hot dry summer.

Not the answer you're looking for? Browse other questions tagged pond wildlife or ask your own question.

5
Can you advise me on a still-water garden pond in tropical Central America?