What is this tree with dark, broad leaves?

Height is a little over 12 ft. The leaves almost remind me of an apple - but they're glossy/waxy (unlike an apple).

The bushes in the background are small-leaved ligustrum ("privet" in the UK). Ligustrum is an invasive here in Texas — the bushes will be replaced in the next 6-12 months. The identification of this tree could seal its fate.

Spring Addenda: Flowers are white with five petals. They did not last long and unfortunately I did not get any photos. More like blossom than a ligustrum flower. 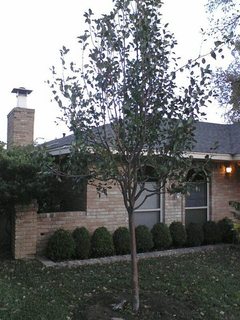 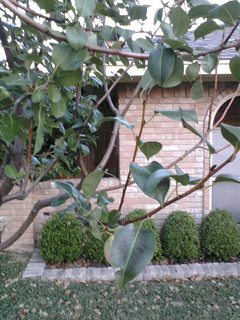 This may not be the final final answer, but we've made progress and think it is a pear. Not a Bradford Pear (we'd know that one alas), but probably a fruiting variety. An Asian Pear is also a possibility. A fruiting pear would fit with the other plants the previous owner has planted (peaches and bananas) and general style.

The leaves are the right shape, color (including a thin light green line down the middle, and glossy upper surface), and the bark is correct for a young tree (which it is). The only thing would be that pears are deciduous so this one is slow losing its leaves and my evergreen assumption is probably wrong (and based on post oaks and peaches in the garden which have lost virtually all their leaves).

We would not be able to identify the variety until/if we get fruit. Neil Sperry ("Texas Gardening") describes a number of varieties and most require or prefer a pollinator. Hopefully the previous owner planted one of the few self pollinators...

Addenda (3rd April): The blossom have fallen and fruit are forming. Looks like it might indeed be pear. Our arborist came by and yes, definitely a pear!! It is possible the Bradford Pears on the street at the back are sufficient to pollinate it. We also have fire blight (apparently this spring is the worst he's seen it due to the mild winter). I'll post a "jeopardy" question about it next week after I get a chance to take a photo of the damage.

Not the answer you're looking for? Browse other questions tagged identification fruit-trees trees or ask your own question.